What the Osprey Overheard 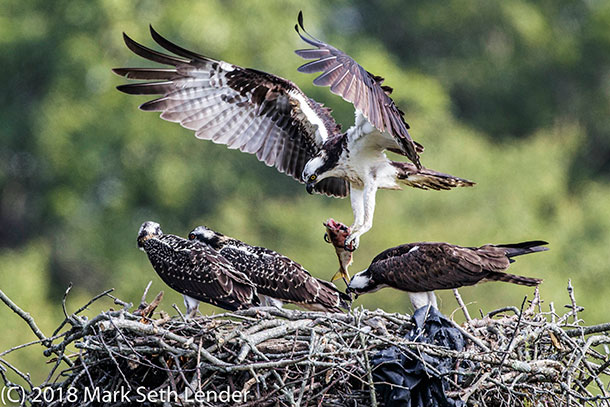 No drones needed for this delivery. (Photo: Mark Seth Lender)

As new osprey parents feed and care for their young, even the faintest of sounds – like a distant plane – seem a threat to the youngsters. Living on Earth’s resident explorer Mark Seth Lender watches as the ospreys keep a watchful eye, and ear, on their surroundings, and muses on how loud our anthropogenic world must be to them.

Essay Transcript: "What the Osprey Overheard" by Mark Seth Lender

The marsh goes as far as the river, breaks there, then continues spreading in all directions for more than two miles, bordered by woods that are dotted with houses. Before the river is an osprey nest that has been there for years, weathered and leaning now. And before the nest the storm slashed remains of sand dunes and then the sea. The waves are small today. Like someone talking in a low voice, muttering to themselves, the one-sided conversation lost on the wind.

An osprey arrives carrying a sanddab. High up he dips and calls announcing his prowess, fisherman and provider. Then lands somewhere out of sight. Now he comes to the nest. The head of the sanddab is already gone which should be enough, but he cannot part with the rest and leaves his mate without sharing. And comes back. And leaves again. The female sitting on her eggs, their blotchy markings like oversized age spots, hardly reacts. Maybe she’s already been fed. Or is she used to this? He just cannot make up his mind…

Two months later and his mind is, inevitably, made up for him.

All three fledglings have survived. Every few days they have doubled, in size and corresponding appetite. It is constant. As if he himself is being torn apart like the sea robin he just brought them and that they now slowly rip to pieces. Three hours ago in the flat calm just after sunrise he caught a bunker, speckled sides and yellowish tail, and the mouth pumping... Now he must wait on tide, weather, the things that fish think, that are important to them, and determine where they will be. And when. And how long. Nothing is up to him. All he can do is comply. And somewhere in between he himself must eat.

His mate takes her exercise flight out and out over the blue-green marsh, long and wide. He waits, the chicks are too young and vulnerable to be left alone. She returns. And he is off again over the merciless sea. He hovers, moves on, hovers again, and again, the water beneath filed to a grainy opacity by an offshore breeze.

Waiting on the nest the female, inexplicably, begins her alarm call

There is nothing nearby, not below or above her. The complaint grows. Now she is in full throat, loud and nearly continuous.

The fledglings move about in the nest.

There. There it is.

A small plane high above the river.

Long before it appeared she heard it. After it vanishes from sight she will still hear it. How loud this world must be to her, the world we have made all around her.

Silence (so-called) has become a respite between interruptions: alone with the 40,000 year old rock engravings at Ewaninga, secret, ancient, indecipherable in the dryness and the punishing heat and the hum of the insects, until the spell is broken by a jet engine in the unseen distance; in the Antarctic where a hill damps out the ship’s engines for a short while.

This, if you chose to ignore the chattering of the chinstrap penguins which in context is of itself a kind of silence; as is the hour before sleep on an island in the Zambezi River, hippo bellowing, the lions in their perpetual argument with hyena; or a waterhole where a herd of elephants comes to drink in the dark, the fluttering purr that seems to echo out of their trunks, the rumble that you feel in your chest more than hear; the hiss of snow in a whiteout on a mountain road above an Icelandic fjord; and also music, although it depends on your idea of music and even then... The last time I saw Coltrane at the Jazz Workshop I had a table up front right on top of Elvin Jones.

I remember it so clearly, how consuming it was. But my body did not stop vibrating for hours.

Which excludes what we can’t hear.

Osprey and almost every other wild animal have more acute senses than us in almost every way. For them the sound of human activity is an unwanted constant, its disturbance detected sooner, much louder, and to negative effect. It interrupts the natural noise we may or may not find meaningful but which is to them is a matter of survival.

Silence, true silence, is a vital thing. And its absence is unhealthy for all of us, in the way the constant uproar of prison is distressful and not good, and all the more so for the prisoner who is innocent of the crime.

There is only one time in my life I can recall an absolute silence. In Vermont, coming down from Spruce Mountain in the dark. That was a half century ago. I have not heard it since.