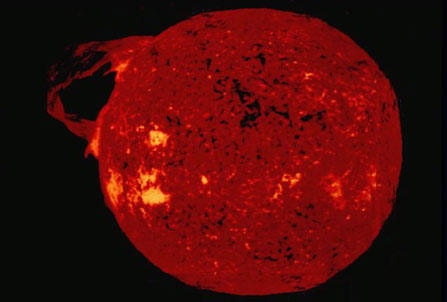 The sun, powered by fusion.

The prospect of producing power from fusion has tantalized scientists for many years, with good reason. Just look up at the sky. The constant burning of the sun and stars – a process that has lasted billions of years – is powered by fusion reactions. Since the 1950s, scientists have tried unsuccessfully to replicate this phenomenon on earth. Yet despite the slow pace of research, recent advances have led researchers to believe that in the future it will in fact be possible to build and operate a fusion power plant. Though still decades away, fusion could provide a limitless, nearly pollution-free form of energy.

Fission reactions are the current source of our nuclear power. Fusion, though in some ways similar to fission, could eventually become a far cleaner form of energy. Fission occurs when heavy atoms such as uranium or plutonium are forced to break apart into lighter ones, thus releasing energy. Fusion, on the other hand, takes place when light atoms, in this case two forms of hydrogen, are forced to fuse together. This reaction also produces an enormous amount of energy.

In addition, because the quantity of hydrogen isotopes in the fusion reaction would be small, a large uncontrolled release of energy, or a meltdown, would be impossible — the plasma would strike the walls of its containment vessel and cool.

Though fission already produces usable, economic power, it also produces a great deal of radioactive waste. And, of increasing concern, the same elements that power nuclear power plants also power nuclear bombs. Fusion fuel, on the other hand, cannot be used to make a bomb. And though a fusion power plant does have to deal with the issue of radioactivity, it is significantly different. Fusion reactors would produce no radioactive waste but result in slightly radioactive containers. This material is safe in only 100 years, while waste from current nuclear power plants lasts for 50,000 years.

Fusion takes place when two isotopes of hydrogen, called deuterium and tritium, are heated to temperatures exceeding 100 million degrees Celsius. When this happens, the gas becomes plasma. Plasma is the fourth state of matter – after solid, liquid, and gas – and when a gas becomes plasma, the neutrons and electrons become highly energized. When they’re this excited, atoms can be forced to fuse together with other nearby atoms. In test fusion reactors, deuterium and tritium fuse together to form helium, at the same time releasing usable energy. 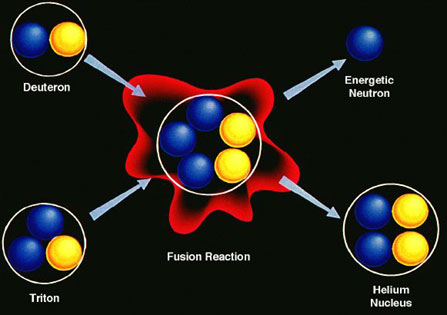 Plasma is heated to these extreme temperatures by using a number of methods, including electric currents, microwaves, and lasers. The power needed to heat up fusion experiments is immense; for the experiments conducted at the Massachusetts Institute of Technology, the lab uses its own power facility, which provides for the duration of a one-second experiment, the equivalent of half the power needed for the entire city of Cambridge, Massachusetts.

When fusion research began, scientists discovered it was a great deal more difficult to work with plasma than they had expected. First of all, no material on earth can withstand the heat needed for the reaction. Scientists instead have designed ways of holding plasmas together with a magnetic field. The plasma, though, can escape this field. Researchers are continually working with the shape of the plasma and understanding more about how magnets can contain it. Also, energy is lost from the reaction as heat. Containing this heat will help scientists achieve their ultimate goal: having the excess heat from the fusion reaction power additional reactions. This is known as “burning plasma.” When scientists are able to reach this point, they will no longer need to feed huge amounts of energy to activate the reactions, because the fusion reaction will power itself. 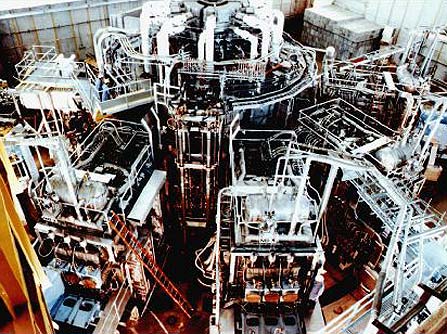 Other Uses for Plasma

Research into plasma developed with efforts to create a fusion power plant. In the 1050s, when this research began, scientists knew very little about plasma. Since then, research into fusion has produced a vast number of benefits to the scientific world. First of all, researching plasma has led to a much greater comprehension of the universe. Now that scientists understand more about the fundamental behavior of plasmas, they can apply this understanding to the plasmas in the heavens.

There are also a number of commercial uses of plasma, such as those listed here:

Computer chip production – The ions, or excited, freed electrons, that jump around in plasma are used to bombard exposed areas in a wafer of silicon to produce the pattern of the circuit. Earlier techniques using liquid chemicals couldn’t cut as precise a line as plasmas can, and so this technique has allowed chips to become increasingly smaller and more powerful.

Cleaning the environment – Plasma are used to literally zap contaminated soils, almost as if scientists were sending a lightening bolt into the soil. Though this does not neutralize the contaminant, it does vitrify it, or turn it into a sort of glass. In effect, this process contains the pollution and makes disposal safer.

Cleaning up cars – Scientists are now working on a small plasma device that would fit onto a car motor. The device will use plasma to significantly reduce emissions from auto exhaust.

Lighting – Both fluorescent and neon lights are based on plasmas.

The journal Science recently published a paper by a scientific task force that considered research possibilities including fusion aimed at reducing dependence on oil, curbing climate change and meeting growing energy demands. To reach those goals at the same time, the scientists conclude, will take a massive effort of time, money and manpower, on the scope of the Manhattan project, and involve “revolutionary changes in the technology of energy production.” Living on Earth spoke with Jim Secord, Professor of the History of Science at Cambridge University in England about how important scientific breakthroughs have historically been made.