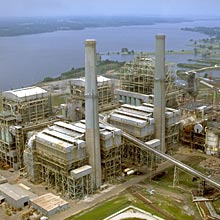 The world's appetite for energy seems insatiable and coal, cheap and plentiful, is increasingly being used to generate electricity. In the United States almost half of our electricity comes from burning coal and fast developing China already uses more coal than the United States, the European Union and Japan, combined.

But in addition to generating energy coal plants spew carbon dioxide, one of the greenhouse gases scientists say is warming the planet. Our series "Generating Controversy: The Changing Climate of Coal" looks at the problems and promise of coal, and the potential of new technologies.

Before and After Coal

In 2004, the Chinese government shut down an old coal-fired power plant in the city of Tongliang. It afforded researchers the perfect opportunity to study the developmental effects of exposure to air pollutants both while the plant was running and immediately after it was shut down. Dr. Frederica Perera is the lead author of the study, and Director of the Columbia Center for Children's Environmental Health. (4:30)

Living Next to Coal

Residents in mining communities are used to layers of coal dust coating every surface, but there was little research on the health effects of this pollution. Now academics in West Virginia are finding residents in mining towns are more prone to lung, heart and kidney disease, and environmentalists hope these findings will help rein in the rush to coal. (7:00)

Kansas is on the frontlines in a fight over coal-fired power and climate change. We'll hear from the Kansas official who took a stand against coal and its greenhouse gas emissions as Living on Earth's Jeff Young tells us what's behind the battle and what it might mean for the rest of the country. (5:40)

The coal industry says it can trap its global warming gases and put them back in the ground where they came from - a process called carbon capture and storage. But the federal government just pulled the plug on the biggest carbon capture project, Futuregen. Living on Earth's Jeff Young reports on the big questions about carbon capture and coal's future. (6:00)

Living on Earth continues its series "Generating Controversy; the Changing Climate of Coal" with a story from Germany where a demonstration plant, set to open this spring, is expected to begin burning coal with nearly zero emissions. Spectrum Radio's Bill Sweet reports. (8:30)

The push to build as many as 150 new coal-fired power plants could be running out of steam. Dozens of coal projects have been scrapped as investors fret over the cost of controlling greenhouse gas emissions. Living on Earth's Jeff Young reports from Washington.

The U.S. coal market is slowing down in the face of impending federal regulation of carbon dioxide, but construction of coal-fired power plants in other parts of the world is moving full steam ahead. Chinese banks now fund the construction of as many as two or more new coal plants each week. Host Steve Curwood talks with Orville Schell, director of the Center on U.S. China Relations at the Asia Society, about China's growing energy market.

Learning In the Shadow of Coal

Living on Earth's Jeff Young visits a West Virginia community where schoolchildren get their lessons in the shadow of a coal mine - literally. Some residents say the massive mountaintop removal coal mine and its lagoon of liquid waste threaten the school's safety and they're determined to get either the school or the mine moved.

Host Steve Curwood speaks with singer-songwriter, Kathy Mattea, about her soon to-be-released album "Coal." Mattea plays some songs and talks about growing up in West Virginia coal country, her relationship with the 'black gold,' and how mining and burning coal is affecting the environment and the people in her native state.

Some powerful members of Congress say a liquid form of coal is the cure for America's oil addiction. But there are serious environmental concerns. Living on Earth's Jeff Young looks at the curious history and possible future of liquid coal.

Australia is the world's largest coal exporting nation and the coal makes a significant contribution to global warming when it's burned. The government has refused to ratify the Kyoto climate change treaty, in an effort to protect the country's coal industry. But in an unusual twist, the Australian coal miner's union has taken a stand to support renewable energy and address global warming. Mark Tamhane reports.

When the National Resources Defense Council and Environmental Defense helped broker the 32 billion dollar takeover of Texas energy giant TXU, environmentalists hailed the deal as historic. But now. as TXU moves away from coal and towards nuclear power, the two environmental organizations are starting to re-think their positions on nuclear energy. Living on Earth's Bruce Gellerman reports.

Will new technology allow us to keep coal power from warming the planet with its greenhouse gas emissions? Living on Earth's Jeff Young visits two very different coal-powered plants to feel the burn.

Coal Controversy Down Under

Exporting coal is big business in Australia. Mark Tamhane reports on the controversy surrounding a proposal to open a large open pit coal mine in the eastern part of the country. Opponents are seizing on a court ruling that says businesses must take into account the impact of their projects on climate change. This may not affect the plans for the pit mine but the coal industry is on edge about how the ruling will affect future coal projects.

Navajos Camp Out for Coal

Reporter Eric Mack visits a Navajo reservation in New Mexico. The Navajo have lived with coal mines and coal plants for generations; now investors want to build a new plant on the reservation. The tribal council approved the plant proposal but some older Navajos are saying "no."

Deep in the Heart of Texas, It’s Coal Versus Climate

Living on Earth's Jeff Young visits Texas to report on the dispute over a rush to build more than a dozen new coal-fired power plants. The Governor says they're needed to alleviate a coming crunch in power supply. But it's sparked a backlash from some unlikely opponents concerned about air quality and climate change.