Jack Spadaro, the superintendent of the National Mine Health and Safety Academy in West Virginia, is about to lose his job. That’s because he spoke out against federal and industry failures connected to the investigation of one of the largest environmental accidents in Appalachia— the 2000 coal slurry spill along the Kentucky/West Virginia border. Guest host Bruce Gellerman talks with Jack Spadaro about what went wrong with the investigation and the charges against him.

GELLERMAN: Welcome to Living on Earth. I’m Bruce Gellerman, sitting in for Steve Curwood. Coal mine safety official Jack Spadaro is about to lose his job as the superintendent of the National Mine Safety and Health Academy in Beckley, West Virginia.

Three years ago, he was a member of a panel investigating the cause of one of the worst environmental disasters in Appalachian history, when 300 million gallons of liquid mine waste burst through a lagoon at the Martin County Coal Company’s site in eastern Kentucky. The spill polluted rivers and wells with thick black sludge. More than twice as much material was spilled along the Kentucky/West Virginia border than the Exxon Valdez disaster in Alaska.

Spadaro resigned in protest from the investigative panel, charging it went too easy on the coal company and failed to hold federal regulators accountable. Now, Bush Administration officials say they’re going to fire Spadaro. Jack Spadaro joins us from the studios of West Virginia Public Broadcasting in Charleston. So Mr. Spadaro, why are you being fired? 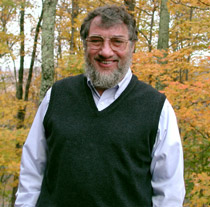 (Photo: Vivian Stockman, OHVEC)
SPADARO: I’m being fired because I told the truth about the mine disaster and insisted that the agency responsible for investigating it hold the mining company accountable for its negligence, and also to look at its own policies and procedures change them so that this wouldn’t happen again.

SPADARO: Yes, they say that, yes. And I think that most people who know me know that these are trivial charges. And we’ve actually answered all of the charges that were made.

GELLERMAN: Mr. Spadaro, let me go back to the investigation of the coal slurry spill in Kentucky in 2000. The waste from coal processing plants is held in these large lagoons, I guess. And this one failed. My understanding is that the bottom of it essentially fell out from it?

GELLERMAN: Now you’re saying that it could have been prevented.

GELLERMAN: Now the government knew this earlier, back in the 90s, and I guess the company did, as well.

SPADARO: Yes, the company did and we have testimony from a company consultant, Mr. Scott Ballard, who said that they knew at that time in 1994, to quote from his testimony: “There would be another breakthrough.” He knew it and when we asked him who in the company knew it, he named five other company officials and engineers.

GELLERMAN: Yet the investigative panel that you were a member of doesn’t make mention of this, does it?

SPADARO: No, it doesn’t. And that’s one of the objections I had to the final report and the reason that I wouldn’t put my name on the report, even though Assistant Secretary Lauriski tried to make me do it.

GELLERMAN: He’s the Assistant Secretary of Labor for mine safety.

GELLERMAN: But aren’t they responsible for enforcing the laws in this area? So why would it want to make things easier for a company that caused such an environmental disaster?

SPADARO: I don’t know. I do know that the company, Massey Energy, has – during the time that they were being investigated, the CEO for Massey Energy, Don Blankenship, met several times privately with Dave Lauriski. And I do know, also, that Massey Energy made at least a $100,000 contribution to the Republican senatorial re-election committee.

SPADARO: Yes. And that Republican committee was chaired by Mitch McConnell, who’s one of the senators from Kentucky, and he’s the husband of Elaine Chao, who is Secretary of Labor. And the Secretary of Labor oversees the Mine Safety and Health Administration.

GELLERMAN: What’s the status of the government’s charges against the company?

SPADARO: Initially, the team members recommended eight to ten serious violations. Mr. Laruiski and the team leader at that time reduced those violations to two. And one of those charges went before an administrative law judge and was thrown out because it was unclear, and I agree with the administrative law judge, actually. So, there’s only one remaining violation against the company. That’s being appealed by Massey Energy and Martin County Coal.

GELLERMAN: What are the total fines against the company?

GELLERMAN: You had a pretty good job working for the government. You made, what, a little over $100,000 dollars a year?

GELLERMAN: You must have known that you were putting your livelihood, your future, your career at risk by being a whistle-blower.

SPADARO: Yes, I was fully aware of that. And I was willing to accept the consequences because I think that in something this important, that involves public health and safety, one should not compromise. I, for many years, had a good reputation in my profession. And I worked 30 years ago on the investigation of a dam failure in southern West Virginia. It was a coal waste dam, similar to this one.

GELLERMAN: That was the Buffalo Creek disaster, right?

GELLERMAN: That was awful. I think something like 125 people died?

SPADARO: Yes, 125 people died. And I was a young engineer. I was teaching at West Virginia University then, and I was asked to go down and work on a study of the causes for that dam failure, as well. I went through the history of the construction of the dam, and found that there were many government agencies who were aware of those dams and knew that they were unsafe. And there were individuals in those agencies who, had they raised the alarm, probably would have saved the lives of the people on Buffalo Creek. And so, from that time on, I promised myself that I would never walk away from something that serious that could cause people to lose their lives or cause serious damage. So, when I approached the Martin County Coal site, we made it a thorough and complete investigation. And I wanted to make sure that we covered all areas so that something like this couldn’t happen again. That was really my only objective.

GELLERMAN: But this must have had a profound effect upon you personally.

SPADARO: At Buffalo Creek, yes. There were women and children, whole families who died in a matter of moments, and… I never forgot. (long pause)… It’s just, still, difficult to talk about. The Buffalo Creek disaster pointed out to me and to many others the terrible toll that was being taken on the people of the coalfields and Appalachia, and on the environment. And it did guide me through my whole career.

GELLERMAN: But if you’re correct, you’re not just charging the government and this company with callous disregard, but really with, basically, allowing a disaster to happen.

SPADARO: Yes, they did. They knew well in 1994 at Martin County Coal that another breakthrough would occur. And instead of discontinuing the use of that impoundment, or taking measures that would prevent it from happening, they added another 80 feet of slurry and water, thereby increasing the possibility of a major disaster many-fold.

GELLERMAN: Are there other mines and lagoons like this in the region now?

GELLERMAN: So, you wouldn’t be surprised if there was another breakthrough and another disaster?

SPADARO: It could happen any day, yes.

GELLERMAN: So, what needs to be done?

SPADARO: What needs to be done is all of these impoundments, all of these lagoons, need to have thorough geo-technical investigations. Then, if they are found to be unsafe, they need to be closed.

GELLERMAN: So is the Bush Administration, the Department of Labor, are they listening?

SPADARO: I don’t think so. I haven’t found anybody in management at the highest levels of the Mine Safety and Management Administration who are paying attention to this problem at this time.

GELLERMAN: Jack Spadoro is a mine safety official facing dismissal from his job with the federal government. Mr. Spadaro, thank you very much.

SPADARO: Thank you. It’s an honor to be here.

GELLERMAN: Officials at MSHA, the federal Mine Safety and Health Administration, declined to comment on Jack Spadaro’s employment there. A spokesperson said the agency does not comment on personnel matters. The U.S. Department of Labor oversees MSHA. Labor Secretary Elaine Chao was not available to talk to us but department spokesperson Ed Frank provided this statement:

FRANK: The Labor Department has longstanding procedures in place to deal with accident investigations. These are spearheaded by non-political career employees. So, to allege the administration or Secretary of Labor is involved in this investigation is completely false. The accident report is a public document, as is the internal review. Both are available on the department’s web site. The recommendation by the investigators cited the company on two counts and it was fined the maximum allowed by law. And finally, of course, if politics were any motive, why would we want to cover up for an incident and oversight problems that occurred on a previous administration’s watch? It just doesn’t make sense.

GELLERMAN: Labor Secretary Chao’s husband is Republican Senator Mitch McConnell of Kentucky, the state where the Martin County Coal is located. Asked to comment on Jack Spadaro’s accusation, a spokesman for the senator says – quote – Mr. Spadaro has an exaggerated sense of his own importance.