The Art of Global Warming 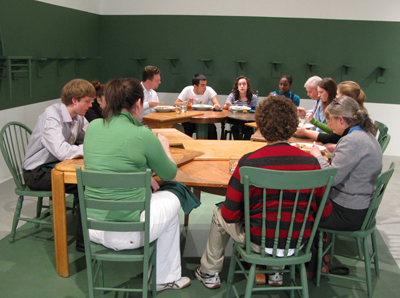 Living on Earth's Mitra Taj visits the art exhibition "Greed, Guilt, and Grappling: Six Artists Respond to Climate Change," in Boston and finds that thinking about rising global temperatures with the right side of the brain can be fun.

GELLERMAN: It's Living on Earth, I'm Bruce Gellerman. The unprecedented warming of Antarctica has triggered the collapse of a colossal chunk of ice along the Wilkins ice shelf. Scientists say global warming is to blame for the caving of an iceberg 25 miles long, and fear the entire 5,000 square mile shelf could cave into the sea. But you don't have to go to the bottom of the world to see and feel the devastating effects of human-caused catastrophe. Here in Boston art is imitating life at an exhibition called “Greed, Guilt and Grappling: Six artists respond to Climate Change” Living on Earth's Mitra Taj took a look:

TAJ: For these six artists, the hot topic of global warming isn't best shown by charts and graphs, but by a 13-legged table, video projections of people yawning, and a full-sized igloo.

TAGIURI: I see the igloo as the zero-impact dwelling.

TAGIURI: It's completely off the grid. It's not plugged in. It's not heated by anything but a little bit of seal oil. And when you're done with your igloo it vanishes back into the world without a trace.

TAJ: Or leaves just a puddle. Tagiuri's installation “House Warming” originally featured two igloos-one made out of charred wood, meant to look like coal, and the other of ice, which he left outside in front of the gallery. A month into the exhibit, not even the puddle remains of the ice igloo.

TAJ: Artist Mags Harries hammered out a somewhat more durable response to the changing climate, an exhibit called “One-Legged Table.” She pieced together 13 different table fragments, each with only one leg, so that they can only stand with the support of the others. Gallery visitor Laura Gonzalez got the message.

TAJ: Gonzalez is with about a dozen other teenagers from Boston's Trinity Church visiting the global warming exhibition. They were invited to eat dinner at the 13-legged table.

Teenagers from the Trinity Church youth group eat dinner and talk about global warming in The Mills Gallery in Boston. (Photo: Mags Harries)

Harries wants her work to suggest the role a table plays in the home, a place where individuals with diverse interests discuss common problems.

HARRIES: It's really a metaphor for how problems can get solved on the very basic level. The table in a home is a place where conversation happens-sometimes difficult, sometimes great, sometimes celebratory.

TAJ : Mags Harries has hosted five meals in the gallery, inviting community groups to talk about global warming over food and drinks at her unique table. Wendy Baring-Gold, director of arts programming at the Center, says it's all about getting the public involved.

BARING-GOULD: Five of the six artists here actually have included a public participation component to the exhibition.

TAJ: So for example, John Tagiuri says visitors aren't supposed to just look at his igloo, they're supposed to get inside it and think.

TAGIURI: You can sit there and go like 'why am I here, what am I doing inside this igloo in a gallery in Boston?'

TAJ: He says art should be approachable and fun. And director Baring-Gould says because it's interactive, the show appeals to more people.

BARING-GOULD: The work is in the gallery, but the work in the gallery has been created with the participation of people who might not normally come into a gallery.

TAJ: Artist Mags Harries says she gets as much out of the exhibition as the visitors.

Environmental artist John Tagiuri prepares Living on Earth’s Mitra Taj to be photographed as part of his project “Compact Liberty.” Participants are dressed like the Statue of Liberty and hold a compact fluorescent lightbulb in lieu of a torch.(Courtesy of Mags Harries)

HARRIES: It's really pretty inspirational to hear 16, 17-year-old kids really be quite aware of these issues and willing to do something about it.

TAJ: As the conversation at the 13-legged table turned from what the works of art mean to how to make their church greener, the teenagers took turns trying out another of John Tagiuri's projects: “Compact Liberty.”

TAGIURI: I've been photographing people from the community, and I dress them up sort of like the Statue of Liberty. They have an American flag wrapped around them and a green crown and I get them to hold a giant compact fluorescent light bulb up like a torch.

TAJ: How do you feel?

BOK: A little goofy. But if any of this helps to bring awareness for the issues of climate change and global warming and energy use, then it's cool.

TAJ: What does the lightbulb symbolize for you?

BOK: I think it symbolizes that environmentalism is definitely patriotic. I think that how we consume our energy and where we get it-it's all about what's going on in the world today. I mean, things like the Iraq war come to mind and also how we're going to work as a country in the future.

Artist Jay Critchley projected video of himself and others yawning for the global warming art exhibit.(Photo: John Horner Photography)

TAJ: That's teenager Abby Bok. In another room in the gallery, 15-year old Helen Henderson is contemplating “Global Yawning for a Small Planet.”

HENDERSON: Well, I'm looking at two projections, and one is of random people yawning, and another is of an artist yawning, over and over again.

TAJ: The artist who devised it, Jay Critchley, says research shows that yawning helps keep our brains from overheating. He wanted to make a statement about the earth's need to cool off.

But Helen had a different interpretation.

HENDERSON: I think the artist was saying that when people hear global warming they just want to yawn and not think about it.

The view from inside artist John Tagiuri's "Coal Igloo." The outside is charred black, and the inside is furnished with cushions, inviting visitors to meditate on dwellings and global warming.(Photo: John Horner Photography)

BARING-GOULD: I've had a number of groups who wanted to know if they could reserve the opportunity to have a slumber party in the igloo. And we haven't quite figured out how to do that yet. You know, afternoon siestas yes, slumber parties-I'm not so sure.

TAJ: Well, here's to art taking the yawn out of global warming. For Living on Earth, I'm Mitra Taj.