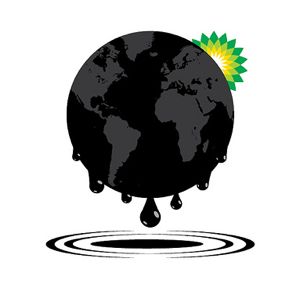 Entry from Greenpeace's "Behind the Logo” design competition. (Greenpeace UK)

BP has spent hundreds of millions of dollars to re-brand itself as a green company in recent years. Now the public is making a mockery of the eco-friendly brand as the gulf spill makes it clear BP is not 'beyond petroleum’ at all. Host Jeff Young asks media analyst John Carroll if BP's image can survive the PR disaster.

YOUNG: It’s Living on Earth, I’m Jeff Young. Nine years ago British Petroleum had an extreme makeover. It became ‘Beyond Petroleum’ and sported a friendly, green and yellow design, something somewhere between a starburst and sunflower. Now that cheerful logo is a big, fat target for protest art. Thousands of new BP designs dripping oil are flooding the internet. Boston University professor and media analyst John Carroll says BP has lost control of its own public identity. 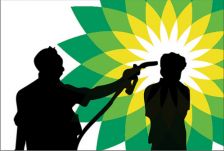 CARROLL: Well you’ve got two things going on here, two elements they’re taking off on. One is the name, so you’ve got BP turning into “biggest polluter,” or “big problem,” or “burst pipes.” And then you’ve got the image of the logo. So all of a sudden you’ve got a globe covered with oil, you’ve got pelicans covered with oil. I mean one of them is a remake of the famous Eddie Adams Saigon execution photo from the Vietnam War. And, it’s a gas pump held to somebody’s head and he’s being shot with it. It’s extremely powerful, but all of them have some sort of damning impact on BP.

YOUNG: And the irony here is they put a lot of money into making that logo so immediately recognizable.

CARROLL: They certainly did. They spent about $100 million a year for the last few years promoting their brand as environmentally conscious. And BP had done a good job, by some measures they had a very positive brand image. And this is important when you wind up in a crisis situation because the stronger your brand image, the more possible it is to weather these kinds of environmental disasters, and also publicity disasters.

YOUNG: How have companies faced with big PR challenges dealt with this in the past, and can BP look to them and rescue their image here?

CARROLL: Well the textbook case of how to address a crisis like this is Tylenol from 1982. They went out and spent $300 million repairing their brand image and they built their market share back up because they were able to go out and control the message. The big difference now for BP is they can’t control the message. 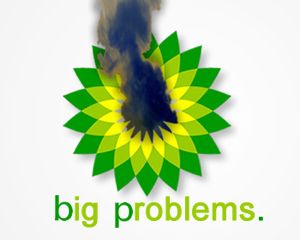 CARROLL: It’s got 130,000 followers and counting. While BP’s own Twitter page has 12,000 followers. So that’s one indication of what happens. And You Tube for instance, there’s Typhoid Tony Hayward, the CEO of BP, who has to be the worst spokesman since Chemical Ali over in Iraq.

I mean this guy puts the damage in damage control. He has, his TV spot up on YouTube, it’s been viewed by 160,000 people- the Explainer on Al-Jazeera has been viewed by 1.6 million people. So BP finds itself in this situation where A) nobody believes a word they say, B) reality trumps PR every time, and C) they can’t control their message even if the first two weren’t in effect, because there are too many competing voices out there.

YOUNG: You know one thing I noticed recently is if you do a simple Google search or Yahoo search and you enter “oil spill,” the first thing you see at the top is something BP paid to be there. That’s I guess their way of fighting back? They’ve apparently bought the search term? 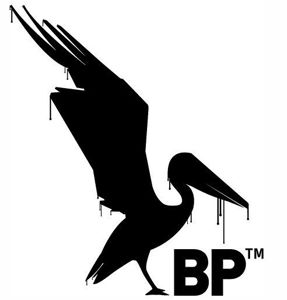 CARROLL: Yes they have and they paid a premium for it, too. I saw one piece that said they’re paying up to $6 a click. There’s something Orwellian about it, but it’s all part of the game. But a lot of times it just isn’t enough. Because the wave of bad publicity keeps coming out, like the wave of oil that keeps coming out underwater. I mean when you have a website that just shows oil coming out of your leaking well 24 hours a day, I mean it’s very hard to come up with an image that counters that.

YOUNG: Is this the end of that re-designed BP logo? Do you think that can survive this, or is that history?

CARROLL: I think that they’re gonna have to make a decision. Have they lost control of that to an extent that they need to go and completely re-tool their image? Anything they do at this point creates a problem with them because they can’t trump reality. I mean, they’ve got Tony Hayward in a TV spot with pristine beaches behind him, and all it does is remind people that those beaches are not going to look that way for very long. 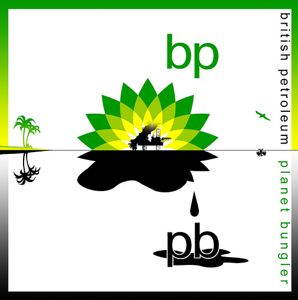 CARROLL: I would. I’m usually not in the business of creating ads for other people, but I would certainly consider putting some workers in the ads to say, “We’ve lost 11 of our co-workers, this is devastating to us, and we will do everything we can to make sure that something like this doesn’t happen again.”

The human element is something that they could possibly use to their advantage, at least to convince people that there’s some sincerity, and there’s some humanity behind what they’re doing.

YOUNG: So this is having some, I’m sorry for the pun, spill-over effects. In the world of baseball, batting practice is BP, and now that, even that, is sadly tainted.

CARROLL: Yeah apparently down in the Florida state league, the Brevard County Manatees have decided that they don’t want to take batting practice anymore because they refer to it as BP. So now they take “hitting rehearsal” which is a little like the Freedom Fries from back at the beginning of the Iraq war.

YOUNG: Media analyst John Carroll at Boston University. He also blogs at campaignoutsider.com. Thanks very much.

Greenpeace "Behind the Logo" competition