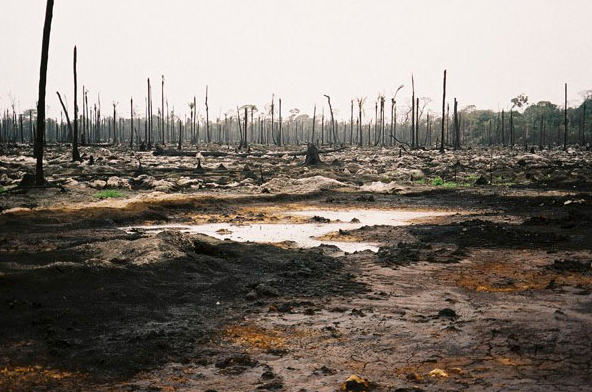 Puddles of oil and water near the Rukpokwu-Rumueke oil pipeline. (Amnesty International)

The West African country of Nigeria is one of the top oil producing countries in the world. Reuters reporter Tim Cocks tells host Steve Curwood that oil theft and lack of enforcement of environmental laws have resulted in ongoing oil pollution and frequent spills, including a recent spill by Exxon Mobil that is 20 miles long and affecting fishing.

CURWOOD: Nigeria produces roughly two million barrels of oil every day and is one of the largest exporters in the world. Yet the enforcement of environmental laws is lax in this West African nation, and oil spills are rife, though seldom reported. But a recent huge spill from an ExxonMobil facility is getting attention.

It has devastated fishing and apparently spread oil across perhaps 20 miles of water off shore from the Niger Delta. Tim Cocks, the chief correspondent for Reuters in Nigeria, joins us via Skype. He says the Exxon subsidiary in Nigeria has admitted responsibility and is working to clean up the mess.

CURWOOD: Now there was a similar spill from an Exxon facility back in August… how does this one compare to the August spill?

COCKS: I’m actually a little on the spot here because we’ve had so many oil spills that you do start to forget which one is which and which one was bigger than which. Also, usually there isn’t very much information about the spill, the only way to find out is to go down there and see how far it’s spread. 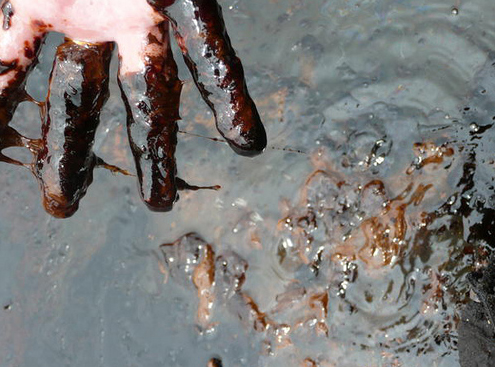 This photo of a hand dipped in oil in Ikarama Bayelsa, Nigeria was taken eight months after an oil spill. (Amnesty International)

And even then it’s hard to get a very accurate picture because so much oil has been spilt, particularly on the onshore Niger Delta over the years, but you might get to a place where locals say this is the spill from the Exxon or Shell, and it’s impossible to tell whether that’s from that spill, or one that happened earlier.

We’re talking about something that happens very, very frequently. So whether this spill is worse than anything we’ve had for awhile, I really don’t know. I don’t think anyone knows exactly how many barrels were actually spilt in this.

COCKS: There are definitely penalties for oil spills. The issue is that they’re not generally enforced. There’s definitely this perception that the Nigerian government either can’t or won’t enforce any kind of punitive measures against the oil companies for spills. What this really does show is that the oil companies are not following best practice in Nigeria the way they would have to somewhere like the Gulf of Mexico, somewhere that if you spill oil like BP just discovered, it’s a whole load of trouble for you.

The main argument that the oil companies have for continuation oil spills on a regular basis is that it’s not really their fault, it’s the fault of oil thieves who hack into pipelines so that they can steal the oil and either refine it at the local market or sell it on ships going to be refined elsewhere or outside of the country.

Just to give you an idea of just how much oil is being stolen, the finance ministry came up with an estimate recently, is that something like a fifth of Nigeria’s oil is lost to theft. Putting it in context, that’s 400,000 barrels a day of oil being stolen. It is a major problem and it certainly is a major contributor to the spills.

CURWOOD: If 400,000 barrels of oil are being stolen everyday, that’s not exactly a mom and pop business, there must be enterprises that are dealing in this!

COCKS: It is a multi-billion dollar business. There’s complicity at all levels according to experts in this field. Complicity between the security forces and the oil thieves, between some local politicians, and possibly some politicians at the federal level, and between some international criminal networks because the vast majority of this oil isn’t refined local, or sold locally, it’s sold abroad.

The main networks have it refined in Singapore, which makes sense because it’s a major refining center – I think it’s the largest refining center in the world - and in the Balkans where you have criminal networks better known for things like trafficking sex workers and selling cigarettes. So, it is a huge international criminal enterprise.

CURWOOD: Have you seen an oil spill yourself there?

COCKS: Yes, I made a visit down to the Ogoniland region which is one of the worst affected by oil spills. Ogoniland is where Nigeria first discovered oil and where it first started pumping oil, more than 50 years ago. There were two major spills by Shell, which is the leading operator in Nigeria, I think around 2008. And Shell accepted responsibility for those spills – they didn’t try and say that it was oil thieves or anything.

The places that I saw, and we went out on a boat quite a long way… you could just see dead mangroves for miles around. These kind of blackened husks of mangrove trees, oil was absolutely everywhere, and we’re talking several years after the spill! And so whether it was just 4,000 barrels that Shell says was spilt, or whether it was more like what Amnesty International suggests, several hundred thousand barrels, it clearly had a very damaging impact. You know, there were fishermen out in the water and they’d come back with the few little fish that they had were covered in this rainbow covering of oil, clearly really struggling to make ends meet with the waters so thoroughly poisoned by this oil.

CURWOOD: How’s the wildlife faring with all of this oil?

COCKS: Well, the Niger Delta is a majorly important hub for wildlife. It’s a huge expanse of mangrove swamps and creeks, rainforest. When I was down there I could see herons and other birds like that water treading through what was effectively an oil slick. So, in terms of what the oil has done to the wildlife in the region, I’m not sure. I’m not even sure if anyone has done a comprehensive study.

CURWOOD: How has civil society in Nigeria responding to this epidemic of oil spills? Of course, famously, Ken Saro-Wiwa, speaking in protest about this, was ultimately executed for his efforts.

COCKS: The Ogoniland communities are still very much trying to keep that activism from that time alive. Of course, the problem is that they feel that no one is really listening to them.

CURWOOD: The statistics would say that Nigeria is one of the top 20 oil producing countries on the planet; what does that mean in terms of money for the people of Nigeria and for the Nigerian government?

COCKS: For the Nigerian government, it means that a huge cash register goes off everyday. Huge amounts of petro dollars pour into their treasury. What does it mean for the people? I think most Nigerians would say that it hasn’t meant very much except everything’s now very very expensive. Oil has been with Nigeria for many decades and most people don’t feel that they’ve really benefited from it. Most people feel that it’s going into the government coffers and lining people’s pockets.

CURWOOD: Tim Cocks is the Chief Correspondent for Reuters, based in Nigeria. Thanks so much, Tim!

CURWOOD: Asked for comment, ExxonMobil's managing director for its Nigerian operations, Mark Ward, sent us an email assuring us that: "Mobil Producing Nigeria is committed to a speedy and comprehensive cleanup. Our oil spill response plans have been quickly implemented in line with this objective.”


Reuters report on the ExxonMobil oil spill in Nigeria