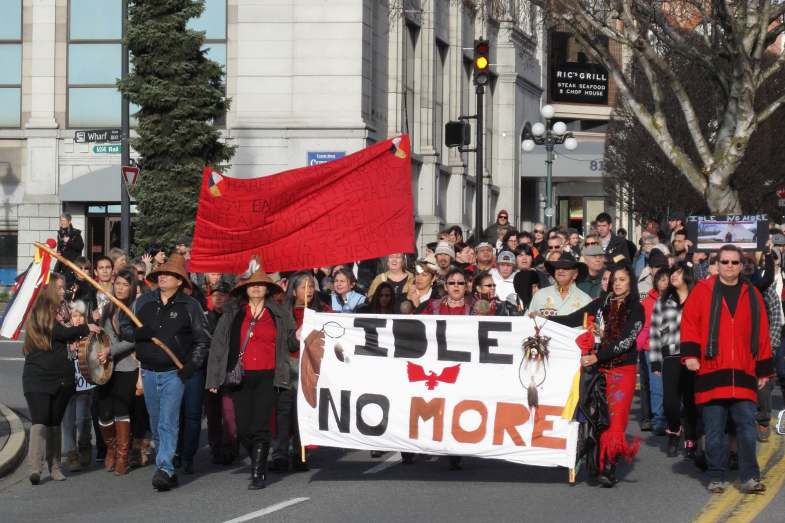 First Nations across Canada are protesting government measures they say undermine native sovereignty and degrade the environment. A chief is on hunger strike, and flash mobs are popping up across north America as part of the movement known as Idle No More. Native American environmental activist Winona LaDuke joins host Steve Curwood to discuss the movement.

CURWOOD: Canadian First Nations folk and friends recently drummed and chanted in a flash mob at a shopping mall in Winnipeg to protest Canadian Government policies. They are demonstrating against recent legislation that they say undermines First Nation sovereignty and harms the environment.

They are part of a movement called “Idle No More” that is making a splash in social media as well. Native American environmental activist and one-time Green Party candidate for vice president, Winona LaDuke, recently wrote about Idle No More for the magazine The Progressive. She joins us now from her home on the White Earth Reservation in northern Minnesota not far from the Canadian border. Welcome to Living On Earth!

CURWOOD: So, much like the Occupy Wall Street movement, these protests have rallied around a moniker: “Idle No More.” Where does that phrase come from?

LADUKE: Very Canadian, that’s all I’ve got to say! I think it means: “Get off your butt and let’s get moving”, or “that’s enough!”

CURWOOD: Now, many have traced this back to the passage of a piece of legislation called bill C45 in Canada; can you describe this law for us?

LADUKE: Generally the bill guts every major Canadian environmental law over the past 30 years. Before the passage of bill C45, the 2.6 million lakes, rivers, and Canada’s three ocean shorelines… a lot of water… had some protection. It’s pretty much gone now with the passage of that bill; about 87 of the lakes, rivers, are protected, and those are largely in the ridings of the Conservatives that are part of the Harper government. 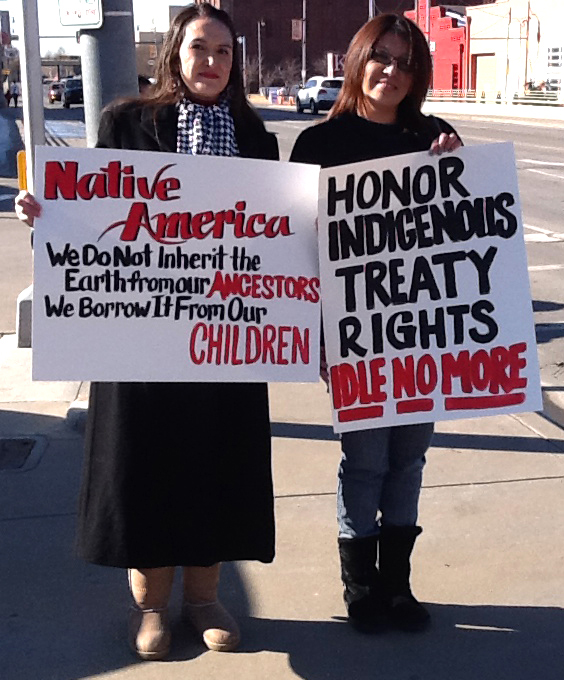 First Nations are really at the front end of a lot of the assault on the land and the water. The First Nations are a lot of the people who live in the area where the mines are, the tar sands, the destruction that is around Sarnia of 62 chemical plants just inundating these tribal communities. They’re at the front end of it and they’re saying: Not only did you just gut the law, but you didn’t even ask us, and you have some legal obligations under international law, which are called treaties, to talk to us about anything that affects our lands, our territories, and the rights that were reserved and protected under those treaties.

CURWOOD: What are some of the other deeper concerns that are motivating this movement?

LADUKE: Well, the general inequality that exists in Canada. You’re looking at these communities, for example, Theresa Spence, the chief from Attawapiskat First Nation, which is a Cree village up on James Bay, she is from this community that has 4,900 residents, 1/3 of them are under 19, they’ve been through, we’ll go with hell… that’s what I’d describe the colonial policies of Canada. You treat them like third class citizens in their own country, they’re living in camps, they don’t have sanitation. The village next door is importing water because they’ve got E. coli contamination in it. You know, you have basically third world conditions, and then you add to it a diamond mine.

DeBeers, the largest diamond mining corporation in the world, has moved into the north, is bringing billions of dollars worth of diamonds into markets. And when this money is coming into the markets, the pittance is going to these First Nation communities whose sanitation systems have been basically overrun by new workers, by new development, by new exploitation. And so, Theresa Spence comes from a village that has basically been a shame to the Harper government for these past few years because the UN and the Red Cross went in there and said: You know, these people don’t even have housing that is suitable. They’re in minus 40 degrees and the wealth is being extracted by DeBeers. And frankly, that’s kind of a snapshot of Canada. It’s a snapshot of Canada historically, and it’s an accelerated snapshot now.

CURWOOD: So, talk to me about the present protests. What form have they taken?

LADUKE: So, with the use of social media, not unlike Arab Spring, people have been organizing these so-called “flash mobs”- these short protests in very public places. The Mall of America, you know the Mall in Broomfield, at the Capital Rotundas, to be a voice of support for Theresa Spence who is on a hunger strike going into her fourth week now, demanding that Prime Minister Harper meet with Theresa Spence, meet with First Nations and ultimately repeal bill C45. In addition to that and the First Nation guys at Sarnia blockaded a CN Railway. And what they’re blockading is hundreds of train cars full of chemicals moving in and out of their communities. And you know, it’s costing some money to the companies, but hopefully it’s drawing some attention to the fact that this community is really toxic and they have to live there.

LADUKE: Theresa Spence’s courage has been the catalyst, the flame that lit this. She’s a middle aged Cree woman, you know, Crees are tough, tough people, and she’s courageous enough to go there with her medicines, with her fish broth she’s drinking, and she’s going into her fourth week. The fact that Prime Minister Harper did not have the dignity to meet with the poorest people in the darn country, until now… and he’s saying he’ll meet on the 11th, which is exactly one month after she started her hunger strike right across from his offices… indicates how extremist his government is.

CURWOOD: So, why do you think that “Idle No More” has caught on in America as well? You’re saying that demonstrations are in this country as well as in Canada? 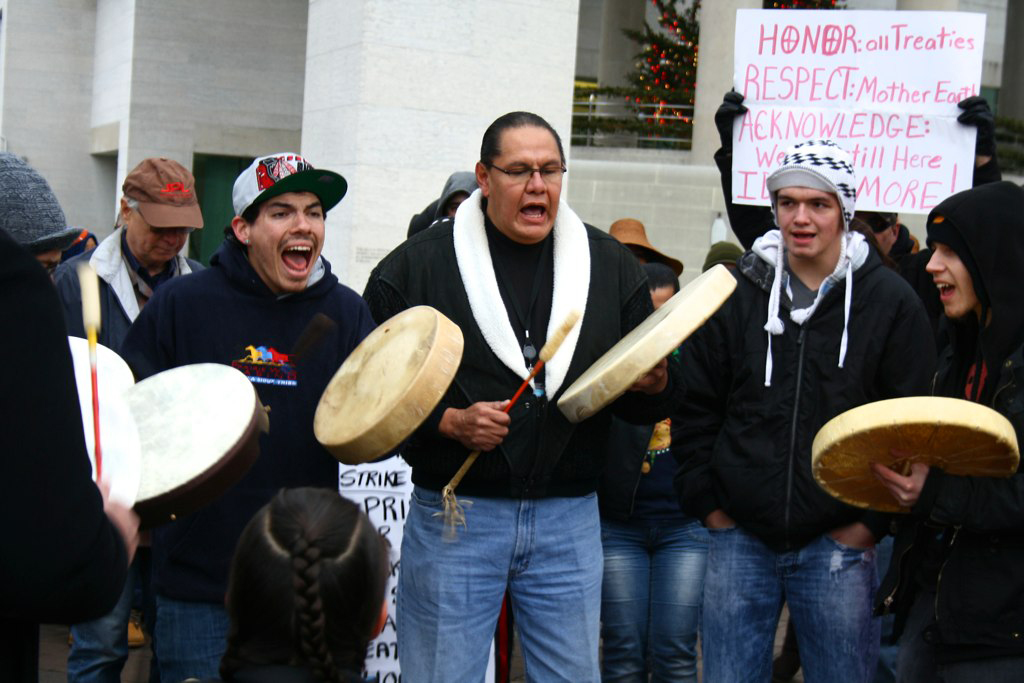 LADUKE: Because, I mean, first of all the border is really a colonial creation that is pretty recent. For people like the Anishanabe who are in the northern part of what is called five American states and on the Canadian side what is called four Canadian provinces, predating by 4,500 or 5,000 years or so, our territory. Predates the border. And so rivers don’t have a border, the toxic contamination, the 240 gigatons of carbon that’s going to be in the air out of the tar sands of Alberta, pretty much doesn’t have a border.

And frankly, native people in this country are looking at some pretty dire circumstances too. You’ve got widespread groundwater contamination from uranium mining in the southwestern United States. You have a sacred site, the San Francisco Peaks, being desecrated. You have Rio Tinto Zinc, huge mining corporation about to lay to waste the Upper Peninsula of Michigan where the Keweenaw Band of Ojibwe have been fighting for over a decade, so we have very similar circumstances.

CURWOOD: Where do you think the Idle No More movement is headed?

LADUKE: Well hopefully it’s headed for the repeal of Bill C45. Hopefully it’s headed for some dignity and some negotiations with the First Nations people for some clean… some security for land rights, for water rights, for ecosystems, some reparations for all that wealth which has been pilfered over the past 50 years by major mining corporations with the blessing of the Canadian government. And hopefully it’s going to educate some Canadians and some Americans so that these issues, which are Native issues, but really they aren’t making any new water. You know the water that’s contaminated by chemical companies or by tar sands, is water that is going to contaminate us all. So, hopefully it will get some action that means that people are Idle No More.

CURWOOD: Winona Laduke is a Native American activist, environmentalist and author. Thanks so much Winona!

LADUKE: Thank you for having me!