The Kilo is Gaining Weight 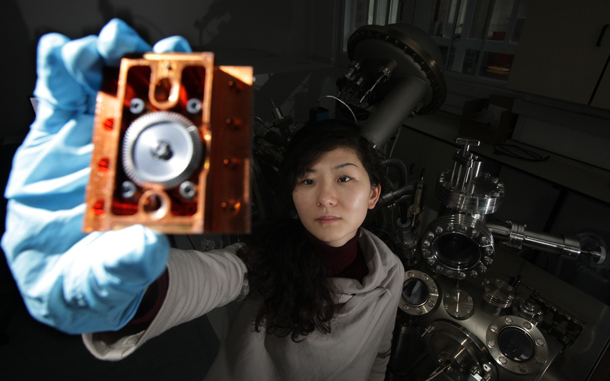 Dr Naoka Sano examining holding a platinum alloy kilogram that has been cleaned by the ozone wash. (photo: Newcastle United)

If you’re worried about putting on a few kilos over the holiday season, you are not alone. Scientists at the University of Newcastle in the UK say that the standard kilogram itself is getting a little pudgy as well. The university's mechanical engineering Professor Peter Cumpson joins host Steve Curwood to discuss the weight that gained weight.

CURWOOD: It's Living On Earth, I'm Steve Curwood. For those who put on a few pounds - or even a few kilos - over the holiday season, there may be some consolation. It looks like the kilogram itself may be gaining weight. That's right – scientists at Newcastle University in the UK have discovered that the original kilogram standard is ever-so-slightly heavier than it should be. Joining us now to discuss these findings is Dr. Peter Cumpson. He's a professor of Mechanical Engineering at Newcastle University. Welcome To Living On Earth!

CURWOOD: So where did the kilogram put on the weight, around the middle?

CUMPSON: I guess it does, it’s a cylinder so, that’s probably the best place for it. It’s a cylinder of an alloy of platinum and iridium and it was made in the late 19th century, and the surface of it, we think, has been gaining a bit of mass.

CURWOOD: Now, I have to ask you, Peter, we still have a single physical standard for the kilogram?

CUMPSON: That’s right, it’s the only one of the SI units that is still an artifact. It did used to be that the meter was defined by a physical artifact, but no longer. These days, a meter is defined in terms of wavelengths of light. To measure a meter, you have to count something on the order of a billion wavelengths of light. That’s not really a problem, you can count that many wavelengths. But to do the same to count a standard of mass, you would have to count a lot of atoms, orders of magnitude more atoms, 1026 or so, in order to make something about a kilogram. And that’s just really beyond any counting scheme, electronic or otherwise that we’ve got.

The ultimate aim, of course, is to have all of the measurement units realized in terms of atomic properties or fundamental constants like the speed of light, and unfortunately that hasn’t hitherto been possible with the standard of mass. 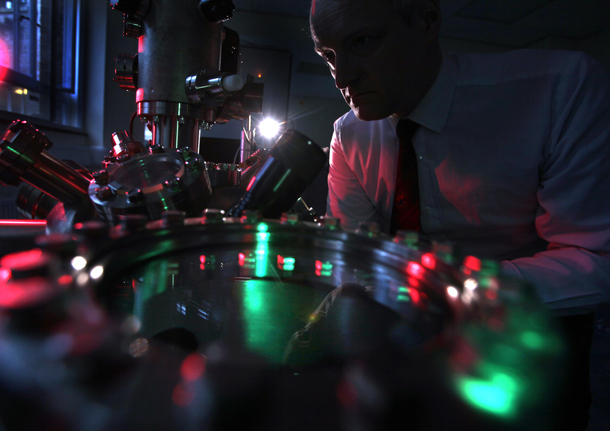 CURWOOD: So, we still need a standard kilo.

CUMPSON: We do. And we therefore have to keep a good eye on what’s happening at the surface and whether we’re exposing it to anything which might cause it to grow.

CURWOOD: How can you tell if the kilo has gotten too heavy if the only thing you can measure it against is itself?

CUMPSON: That’s an absolutely crucial point. We don’t really know what’s happening to it, we know what happens to it with respect to other kilogram artifacts made at about the same time. But, in principle, one can only measure the differences between them. What we’ve done is to take samples of platinum iridium alloys and place them in similar environments in similar laboratories, in fact in the same laboratory in some cases, and the result is that you pick up two kinds of contamination. And we think those two kinds must be present on at least a good fraction of the national standard prototypes which are held by all of the developed countries.

CURWOOD: Ahah! Carbohydrates for the kilo!

CUMPSON: Perhaps not very nutritious carbohydrates, but they are carbon based. The other form of contamination is in fact mercury, which is a bit of a surprise. But of course, in these laboratories where these kilograms are kept, often the scientists have to make careful measurements of temperature and pressure. Until recently it has all been done using mercury thermometers or barometers. So, probably over time, it’s quite likely that one or two of these have been broken and led to a certain background of mercury vapor. And mercury forms a nice alloy with platinum so that we’ve certainly found that very rapidly on clean pieces of platinum and platinum iridium alloy, a mercury layer forms.

CURWOOD: What’s the scale of this weight gain of the kilo. How serious a problem is this?

CUMPSON: It’s certainly in the rage of tens of micrograms, and probably of the order of 100 micrograms.

CURWOOD: So, it’s 100 millionths of a kilogram. If we were to imagine that we had 100 million kilos of gold in front of us, we’d be off by a single kilogram.

CUMPSON: That’s right. It’s very tiny. But there are one or two applications where it probably really is important to maintain something like that degree of accuracy. If you have a material where you really need to make sure that you’re receiving just as much material as was dispatched, then a good way of accounting for that is to weigh it before and after it’s sent. So, in particular, things like nuclear materials, very important to weigh them very accurately, so you can make absolutely certain that none of it has gone astray enroute.

CURWOOD: So, what’s been done to get the kilo on a weight loss program?

CURWOOD: In other words, sunbathing is what you’re saying.

CUMPSON: It’s a kind of sunbathing. Particularly sunbathing in an environment which is quite rich in ozone. I wouldn’t recommend it for humans, but it’s very good at removing carbonaceous contamination.

CURWOOD: Oh, I see. I was hoping that maybe I could get rid of a few kilos that way.

CUMPSON: Um…I can tell you, you really wouldn’t be happy to try that. It’s quite an aggressive way of removing carbonaceous contamination from surfaces.

CURWOOD: Peter Cumpson is professor of mechanical engineering at Newcastle University in the UK, thank you so much Professor!