A Bright Spot for Coral Reefs 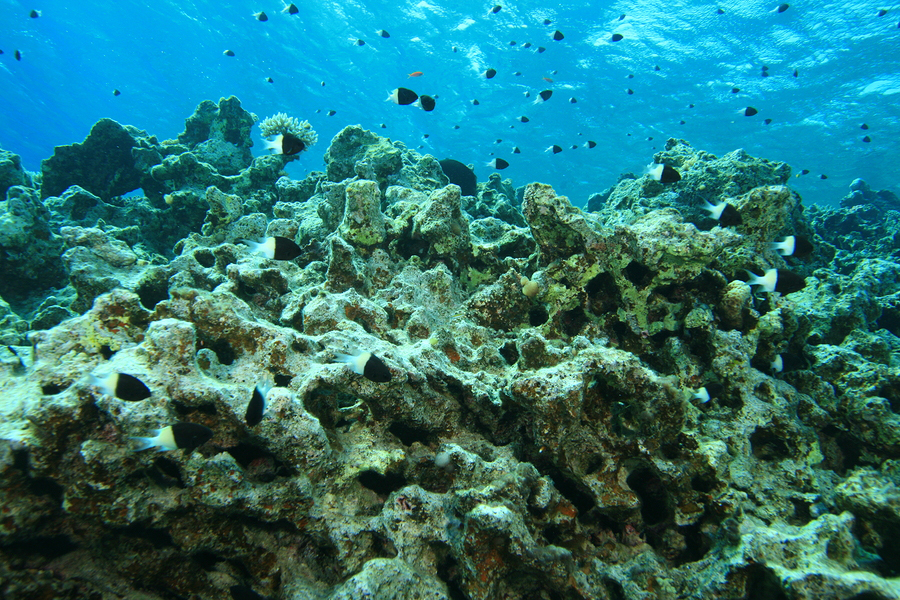 Coral bleeching causes corals to loose all their color and turn a pale white. (Bigstockphoto.com)

World wide, many coral reefs are dying as a result of increased sea temperatures and coral bleaching. But Stanford University professor of Marine Science, Steve Palumbi, tells host Steve Curwood that some populations of coral in the American Samoa are thriving in high ocean temperatures. These heat-adapted corals might provide hope that corals can adapt to a rapidly heating ocean.

But some corals in American Samoa are actually thriving despite the heat. At least that’s what researchers at Stanford University reported recently in the Proceedings of the National Academy of Science. Steve Palumbi is a professor of Marine Science at Stanford University and a lead author on the research. He explained how corals bleach and otherwise react to the stresses of heat. 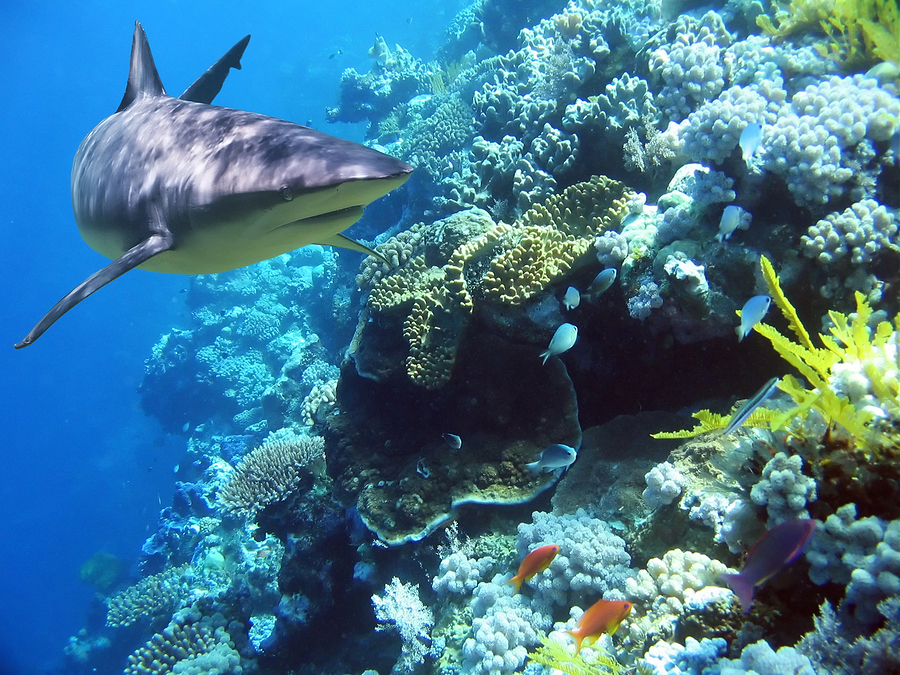 PALUMBI: Coral bleaching is an event that happens when the water temperature gets a little too high for the coral. It has naturally an internal symbiote, an alga, that it uses to photosynthesize and provide energy. And when that water temperature heats up, that algal interaction with coral breaks down and the coral spits the alga out. And as a consequence, most of them die, 80-90 percent of them die after bleaching. It’s called bleaching because they turn white before they die.

CURWOOD: Where do you see all these coral die-offs? 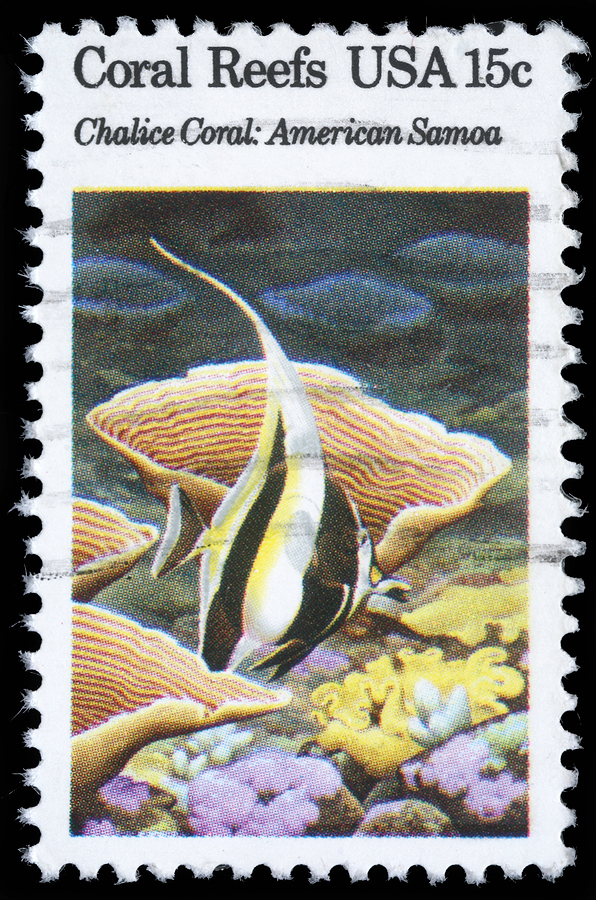 PALUMBI: You see them everywhere. The most recent ones, serious bleachings were in Southeast Asia, before that in the Caribbean, throughout the Pacific. There really hasn’t been any single reef in the world, which has been immune to at least one form or other of these problems.

CURWOOD: Your research team, though, found a population of coral that, well, they’re actually thriving, where other corals of the same species around it are struggling. Can you tell me about that please?

PALUMBI: This is in a US National Park - the only US National Park south of the equator– in American Samoa, and back reef lagoons in this park heated up during the summer to 33, 34, 35 degrees Centigrade and in Fahrenheit, that’s about 94, 95 degrees Fahrenheit, almost body temperature, and that’s just way too hot for most corals. They will bleach at much cooler temperatures than that. But the surprise was that in these back reef lagoons, in this very hot water, there were dozens of species of coral thriving and growing and seeming to do quite well. So, we began approaching this area with a simple question: How do these corals manage to live in such warm waters? And what would that tell us about the potential of corals to do better in future warming oceans?

CURWOOD: Yeah, I mean, that is the question, isn’t it? How do these corals survive when the very same species just down the beach don’t?

PALUMBI: What we think is going on here is that these back reef corals experience heat spikes just about every day. Turns out that low tide in this part of the world is mostly during the middle of the day. And at low tide the back reef lagoons quiet down, the water motion about ceases, the water becomes still and warm, and for those couple of hours of low tide the water stills and spikes, and then it cools off when the tide comes back up. And so we liken it to an exercise regime where a couple hours a day these corals have temperature exercise – they are exposed to high temperature. And our hypothesis is that this periodic heating is like a conditioning regime that conditions them to be able to withstand longer term heat events.

CURWOOD: What about the possibility of simply transplanting some of these heat resistant corals to other parts of the ocean to re-populate areas where their species brethren are dying off?

PALUMBI: So, that’s a possible tool that could be employed in the future if we got really desperate about coral. The way that I think about it, Steve, is that if this is happening and if it’s a broad phenomenon that most corals can do, it buys us a little more time, it buys us a few more decades to solve the global warming problem before corals are around the world way too hot to survive.

CURWOOD: And corals, of course, are so crucial in the marine ecosystem, providing habitat for fish that so many other marine species, and us humans for that matter, rely on. So, if we can’t figure this out, if we can’t help coral adapt or we can’t figure out how this works, what would the ocean look like, say, 50 or 100 years from now?

PALUMBI: If reef corals were dead all over the world, those reefs would look like rubble fields covered in algae, mostly devoid of the kinds of fish that are usually there. Fisheries in places around the world that would rely on them would collapse. There’s about a billion people that rely on coral reefs for fish and fisheries, either for income or for protein. Hundreds of millions of people get most of their animal protein directly from coral reefs.

They also provide an enormous amount of value for surge and storm protection. After Hurricane Sandy, the 60 billion dollars in aid that is flowing into the Northeast is to build storm protection. Well, coral reefs do this for free. They grow storm protection. Corals are going to be going through a pretty tough time in the future, but to be honest it’s the human species that’s going to be having a much harder time.

CURWOOD: So, I’m wondering, how old are corals in terms of biology and evolution and if they’ve been through different temperature regimes on the planet, might they have something to teach us?

PALUMBI: I think that’s an excellent perspective, Steve. Corals as a group have been around for a quarter of a billion years. They’ve seen a lot of change. And our approach to this has always been to say: Let’s look out there in the world at the variation in marine organisms, they have lived in our very diverse ocean for a very long time. Maybe they have some of the tools and some of the skills to react to changing climate that we could use, that we certainly know about. So, part of our mission here is to look for resilience in organisms to climate change, find out where wildlife is winning, and use that knowledge to map resilience, and hopefully use that to protect those areas that are more resilient in the future.

CURWOOD: Steve Palumbi is Professor of marine science at Stanford University, thank you so much, Steve!

PALUMBI: It's a pleasure, Steve. Thank you very much.