The US government has released its third National Climate Assessment for public comment. This comprehensive report finds humans unquestionably responsible for recent climate disruption, and warns that global temperatures could rise as much as ten degrees by 2100 if greenhouse gas emissions go unchecked. Host Steve Curwood talks about the climate report with Carol Browner, President Obama’s former director of the White House Office of Energy and Climate Change Policy.

CURWOOD: The U.S. government recently released a draft of its third National Climate Assessment, saying that human activity is the primary cause of climate change. The report warns that if emissions go unchecked global temperatures could rise as much as ten degrees by the end of the century. It also details the impacts global warming is expected to have, and has already had, on American lives.

Carol Browner is a distinguished senior fellow at the Center for American Progress. A former head of the EPA, she served President Obama for two years as the director of the White House Office of Energy and Climate Change Policy. Welcome to Living on Earth.

CURWOOD: So, Carol Browner, what’s most important about this assessment?

BROWNER: Well, I think what this assessment tells us, yet again, is that something is happening; something quite dramatic is happening, something that requires our attention. It’s getting hotter. The storms are getting worse. And there’s a huge amount of scientific consensus about the need for action. 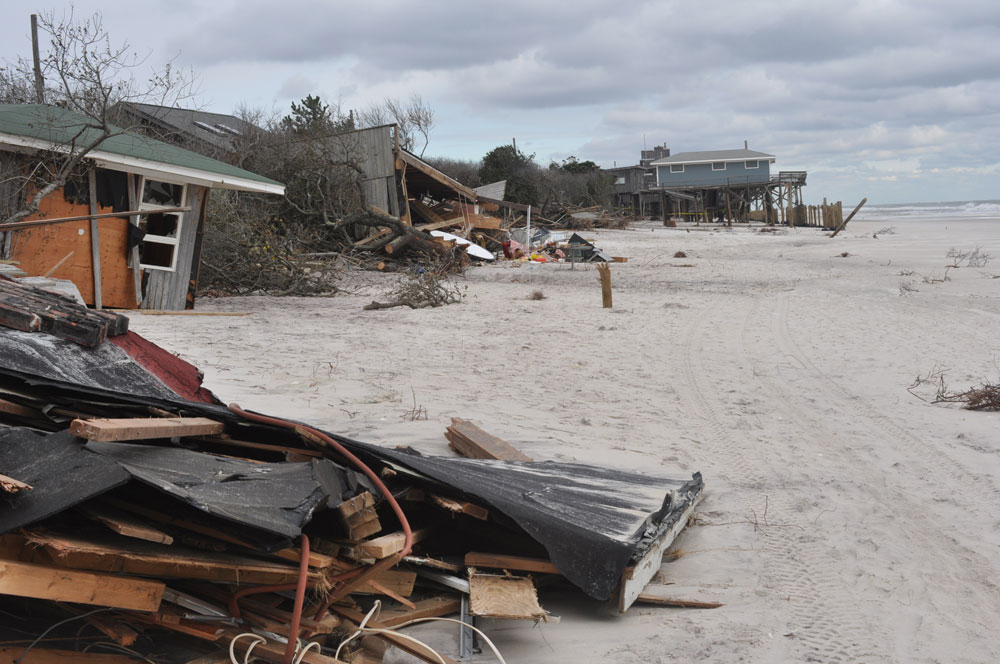 A number of ocean front homes were destroyed or severely damaged during Hurricane Sandy on Fire Island, NY. The photo shows what remains of houses in the community of Davis Park. (Photo: Cheryl Hapke, USGS)

CURWOOD: The report seemed to amp up the certainty though from earlier versions that talked about very likely to - to hey humans really are the principal cause. What do you make of that?

BROWNER: I think that’s right. I think that the scientists do what scientists do. They continue to study and this time what they’re saying to us is the science is even clearer that it is human activities that are contributing to these changes in the climate and that we need to do something. Now obviously, this is a draft assessment. It will be subjected to public comment, and then they’ll issue a final report. But it seems highly likely that the final report will take this very significant step up saying that science is just increasingly clear, and that we need to act.

CURWOOD: What immediate action do President Obama and the Congress need to take on climate change given the findings of this comprehensive report?

BROWNER: Well, I think it’s important to know the President has taken some action. Certainly the work he did with the car companies to establish the first ever greenhouse gas emission fuel efficiency standards. They’re hugely important in getting some reductions in that industry. I think the next step is obviously smoke stacks and there the administration has proposed standards for new smoke stacks, new power plants. I think the real issue is existing power plants, and I think we will see the administration propose something and the EPA take action. And to the degree in which we can achieve real and measurable reductions from fossil fuel burning power plants will be important in terms of starting to bend down, if you will, the level of emissions. 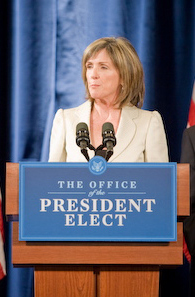 Carol Browner, a Distinguished Senior Fellow at the Center for American Progress and President Obama’s director of the White House Office of Energy and Climate Change Policy from 2009 to 2011. (Photo: wikipedia.org)

CURWOOD: There’s one call for action for the President from advocates who say that the Keystone XL Pipeline should not go forward. That would move the produce of tar sands into the market and into the atmosphere, and would, they say, have a strong effect on climate disruption. What sense does it make for the government to support this project, given this climate assessment’s predictions?

BROWNER: The question in front of the administration is the actual siting of the pipeline. I suspect that the State Department who has the ultimate decision-making will look very, very carefully at the sites that have been proposed. But, you know, the concerns that the activists raise are legitimate concerns, which is, we’re going to take a fuel that will only contribute to greenhouse gas emissions, and extract it, and ship it.

CURWOOD: The activists are pointing to the Keystone XL Pipeline controversy as a litmus test for the President. They say, if he’s really serious about addressing climate change, he won’t let his administration go forward with facilitating the extraction of tar sands.

BROWNER: I don’t know if one single decision is a litmus test. I think you have to look at what he’s done, what he is prepared to do. I think this is a president who has believed we have a real opportunity to change our energy, that we create a clean energy future. We’ve seen huge investments in renewables. We’ve seen growth in renewables. Obviously all of us would like to go more quickly. But we are starting to make measurable progress and I think the President will do more things in his second term.

CURWOOD: So if you were still at the White House, running energy and climate policy, what would you say the United States now has to do to protect its people and economy from what’s coming, in terms of climate disruption?

BROWNER: I think we have to do two things. One, we have to continue to reduce emissions. I think we also have to begin a very serious and thoughtful conversation about resiliency and adaptation. I would prefer we didn’t get to this place, but the reality is we need to begin to think through...and storms like Sandy are certainly reminders. How do we redevelop in the case of Sandy - rebuild. How do we develop into the future to ensure that what we now understand are likely to be a climate impact won’t cause us to invest poorly, but rather that we think about these challenges and we invest accordingly. So for example, you don’t build in a flood plain, you don’t destroy marshes in a flood plain, because those marshes actually do a really good job of absorbing a storm surge. Nature’s pretty good at helping itself out if we allow it to. 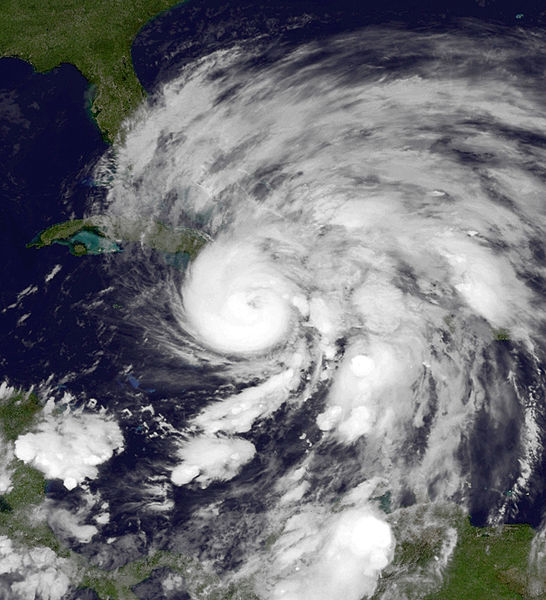 CURWOOD: The report points out there are synergies in dealing with these problems. For example, long term emissions reductions may not feel like it has an immediate payoff. But if it comes in the form of reducing pollution, say from power plants, there’s an immediate impact on human health. How do you think the administration should frame these choices, particularly in these times of tight budget constraints?

BROWNER: Well, I think that’s exactly right; that when we reduce emissions from smokestacks and reduce emissions from tailpipes not only will we see climate benefits, but we’ll also see public health benefits. So for example, one of the things the administration did, one of things Lisa Jackson did, was set a new fine particle standard. What we know as tiny fine particles are very dangerous, particularly for older Americans – they can contribute to premature deaths. They’re a byproduct of burning fossil fuels in many instances. So to the degree to which we’re reducing the use of fossil fuels, the degree to which we’re reducing emissions associated with fossil fuels, those reductions have immediate, real, and measurable consequences; in this case, particularly for older Americans.

CURWOOD: Lamar Smith, who is a Republican from Texas, he chairs the House Space, Science and Technology Committee, said after this report came out that he believes climate change is due to a combination of factors including natural cycles, sunspots, and human activity, but scientists still don’t know how much each of these factors contribute to climate change that the Earth is experiencing. In other words, we’re not certain that there’s a problem here. This is a political problem to go ahead. How do you deal with it?

BROWNER: Look, maybe you don’t believe climate change is real, OK? I think it’s real. The President thinks it’s real. But that doesn’t mean there aren’t other reasons to be doing this. There is a green energy revolution in the world. There’s no reason why the United States can’t be at the forefront of that. Why we can’t be making the best technologies, creating the jobs here in the United States and shipping that technology around the world?

CURWOOD: Carol Browner was the climate czar for the Obama administration, and is now a distinguished senior fellow at the Center for American Progress in Washington. Thank you so much, Carol.