A new twitter hashtag is pulling back the curtain on some of the truths that drive decisions in scientific labs around the world. It’s called #overlyhonestmethods and scientists can’t seem to get enough. Living on Earth's Emmett FitzGerald reports.

CURWOOD: When a scientific study first comes out, it’s all about results, results, results. But a new twitter hashtag is giving the twitterati an inside look at some of the methods and reasoning scientists employ to reach their conclusions. It's called #overlyhonestmethods, and it's inspired people in laboratories around the world to share insights into science that aren’t to be found so easily in the textbooks. For example:

MAN: We used enzymes from NEB because the sales rep was nice and gave me free samples.

WOMAN: Healthy control blood was taken from a donor with informed written consent. I know they were informed because it was me.

MAN: Incubation lasted three days because this is how long the undergrad forgot the experiment in the fridge. 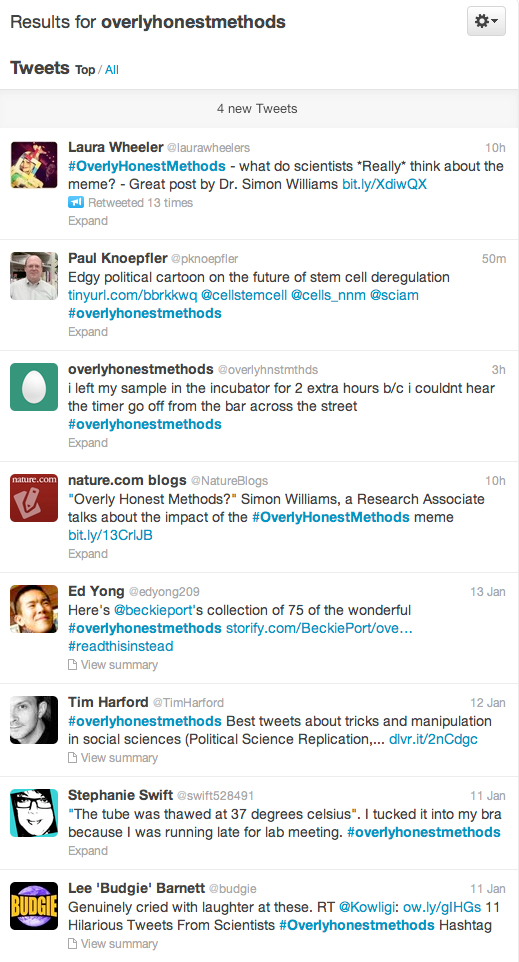 CURWOOD: We asked Living on Earth's Emmett Fitzgerald to investigate.

FITZGERALD: The very first overly honest tweet was written by a Twitter user who goes by Dr. Leigh. Since then, Dr. Leigh’s hashtag has taken off, giving scientists a platform to admit to all manner of experimental methods. Now, people throughout the scientific community are taking part, from medical students to chemistry professors.

MAN: Blood samples were spun at 1500rpm because the centrifuge made a scary noise at higher speeds.

WOMAN: The Eppendorf tubes were "shaken like a polaroid picture" until that part of the song ended.

[MUSIC: Outkast “Hey Ya” from Speakerboxxx/The Love Below (Arista Records 2003)]

FITZGERALD: We wanted to find someone to put the tweets in perspective, so we turned to Dr. Janet D. Stemwedel, a former chemist who now teaches philosophy at San Jose State University, and specializes in scientific ethics.

STEMWEDEL: I’ve gotta say my favorite was the one about shaking the Eppendorf like a Polaroid picture until that part of the song was done!

FITZGERALD: Dr. Stemwedel thinks that the tweets reveal genuine dilemmas that many scientists face in the lab. Music can help you pay attention, equipment sometimes does make scary noises, and the scientists themselves are only human.

STEMWEDEL: It’s not a robotic precise work force. It’s real human beings, they have attention spans that wander, they have stomachs that rumble, and being honest about that is kind of nice.

FITZGERALD: Although most of these confessions seem relatively harmless, some scientists are concerned that they may provide ammunition for critics to discredit sound research.

STEMWEDEL: Some scientists might actually worry that if they’re too honest with their methods, this is an opportunity for people with a reflexive distrust of science to come in and say “oh look, these horrible people are wasting our tax dollars doing silly things like dancing with their Eppendorf tubes in the lab.”

FITZGERALD: But Dr. Stemwedel says that certain people will have a bone to pick with science no matter what. At the end of the day, the tweets give us unique insights into the scientific process that we’d never be able to get from an academic article.

STEMWEDEL: They’re showing us a window into the human side of how the knowledge gets built. Scientists not only have a commitment to building reliable knowledge about the world, they have a sense of humor.

FITZGERALD: So the next time you read about a new discovery, remember, it may have taken a whole squad of scientists in a lab somewhere shaking test tubes along to their favorite song to make it all possible.

CURWOOD: You can find a link to #overlyhonestmethods at our website, LOE.org