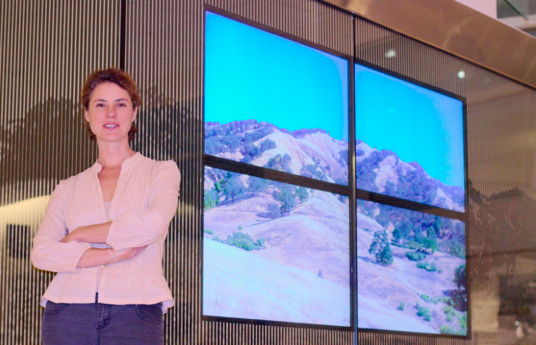 Artist Freya Bardell of Greenmeme with an image from the 'ridge cam' on the Blue Oak Ranch Reserve. (Josko Kirigin)

In a novel experiment, artists have set up cameras that beam images from a nature reserve to San Jose's airport. Adelaide Chen reports that over time, they hope to show climate change in action.

CURWOOD: Artists have long understood the power of the image to engage and demonstrate abstractions that can be hard to grasp. That's the idea behind a new public art installation at the San Jose airport in California. It's part Ansel Adams and part science experiment. Artists are taking real-time photos of natural landscapes to document the impacts of climate change on a private ecological reserve. From Silicon Valley, reporter Adelaide Chen has the story.

One of the display cases at the Mineta San Jose International Airport. (Adelaide Chen)

CHEN: Tucked away in the mountains on the outskirts of Silicon Valley is the newest University of California field station, the Blue Oak Ranch Reserve. But it’s not a public destination. It’s 3,300 acres of open space set aside for research.

CHEN: At the steering wheel of an old Dodge truck is Freya Bardell. She and partner Brian Howe are part of an artist duo known as Greenmeme, the first artists-in-residence at the reserve.

BARDELL: Now we can take a look at the cameras if you'd like.

CHEN: Yeah that would be great.

CHEN: Together with a scientist and software programmer, they’re building a public art project which aims to make climate change visible through the eyes of impartial observers–cameras.

CHEN: They’ve set up the cameras to capture high-resolution images of landscapes on the reserve which upload to a server every three minutes. These files are a visual dataset which can be studied later for patterns.

BARDELL: We wanted to look at biological systems and how nature is communicating climate change and how it's happening all around us and we just don't always necessarily know how to read the messages.

CHEN: They hope to find visual cues over time. For instance, global warming could cause trees to migrate up the mountain ridge, or cause a visible change in the fog that regulates coastal and inland temperatures.

BARDELL: Such an amazing resource. Sort of untapped in a way.

CHEN: To get to the cameras, the artists have to walk through a field of dry yellow grass towards a muddy pond. 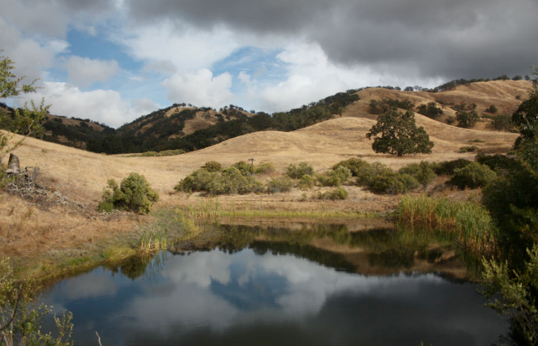 The 'pond cam' snaps a digital photo every three minutes to document the landscape particularly as it relates to climate change. (Greenmeme / Blue Oak Ranch Reserve.)

CHEN: It’s a calm natural setting until you spot the solar panel that powers a wireless modem and a microcomputer controlling the camera.

BARDELL: So we’re going down a little deer path.

CHEN: Bardell heads towards a towering bush that camouflages the camera. The pond cam sits on a wooden platform protected by a weatherproof case. It’s a perfect place for a year-round postcard view.

BARDELL: Seasonally it changes really dramatically. It goes from this gold in the summer to green grasslands and wildflowers. So it goes through this kind of cycle of color that will also be reflected in the pond. And then in the foreground is where we hope to capture some of the wildlife.

BARDELL: When I was walking along here I heard all these plops. Plop. Splash. Plop.

CHEN: Yet in five years of visiting the reserve, she has never seen this elusive frog. Now it’s the camera’s job to capture these images and bring them to the public’s attention.

[SOUND OF VOICES, PEOPLE INSIDE INDOOR FACILITY ON RESERVE]

CHEN: Few people get to visit this private reserve, but in this modern barn which serves as the main building, there’s a group having a close encounter with a rattlesnake.

CHEN: Its head is firmly secured in a tube and guests are stroking it. The tagged rattlesnake is one of 80 research projects conducted here since this land was donated to the University of California system five years ago. Reserve Director Mike Hamilton has been here for all of them but he says this first public art project is special.

HAMILTON: Well, I'd say it's Ansel Adams on steroids (LAUGHS). It's fixed images times an infinite amount of time. Because we're slicing the movement of time into three-minute chunks that then are captured permanently in an archive that now can be compressed and presented to us in a way we don't normally see nature.

CHEN: And while the public can’t set foot on the reserve, they’ll be able to see the images captured by the cameras day or night in a location that’s always open...the San Jose International Airport. 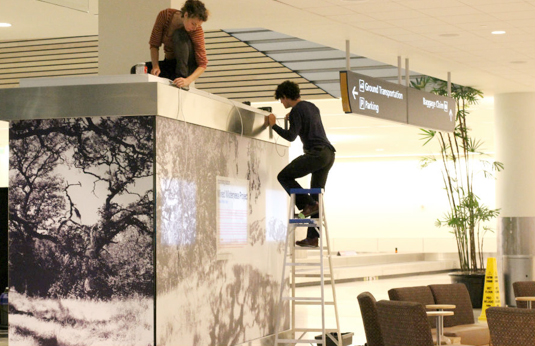 Freya Bardell and Josko Kirigin set up infrared cameras on an airport display case late into the night. (Adelaide Chen)

[AIRPLANES AND SLIDING DOORS TO THE BAGGAGE TERMINAL OPEN]

CHEN: The city of San Jose funded the first two years of the project with revenues from the airport. It’s set up LCD panels in display cases inside the baggage terminal where some five million passengers pass through each year. Brian Howe is Bardell’s partner in this artistic endeavor.

HOWE: The average person will have less than 30 seconds to give it, and if we're lucky, we might have someone for 4 or 5 minutes, you know, waiting around for their luggage. And then there's the occasional person who might be there for a few hours.

CHEN: Howe says they’ve paved the way for future artists to continue and develop their own versions of the project at the reserve for decades to come. But it took years for him to get the experiment off the ground. First there was the funding. Then came the technical part.

CHEN: For the final touch the artists install infrared sensors over the display cases. These will cause the images to move in reverse like a time capsule when they sense movement.

CHEN: One Saturday morning Kaila D’Sa is walking past the baggage carousel to pick up his mother. He stops to take a look at the display cases.

D’SA: It’s a beautiful thing to just see that not only the airport being this big obtrusive platform for big huge airplanes to come in also takes time to give back to the community to say...we also need to preserve certain areas where we just need to let nature do its thing and the birds and bees flourish.

CHEN: The airport prides itself on its certified green building, a clean natural gas fleet and most of its trash diverted from landfills. But most of these efforts aren’t as visible to the public as a display case, with live images that update every few minutes. Over time these images will have the most compelling story to tell about the biggest ecological issue of our generation, climate change.

CURWOOD: There are images of the installation and the Blue Oak Ranch Reserve at our website, LOE.org.