Right Whales in the Wrong Place

(Whale and Dolphin Conservation. WDC acquired images under the authorization of NOAA/NMFS, it is illegal to approach a North Atlantic right whale within 500 yards)

A Right Whale mother and newborn calf have been spotted in Cape Cod Bay. Whale and Dolphin Conservation Biologist Regina Asmutis-Silvia tells host Steve Curwood that Right Whales should travel to the balmy waters of Florida and Georgia to give birth at this time of year.

CURWOOD: Right whales are so called because they were the right whale to hunt, high in blubber and feeding near the surface, so easy to spot and harpoon. There are now thought to be less than 500 Northern Right whales alive, so scientists were excited to spot a mother and baby recently. But this pair was in the normally chilly waters of Cape Cod Bay, off the Massachusetts coast at a time of year when Northern Right whales give birth down south – off Florida or Georgia. Regina Asmutis-Silvia is senior biologist at Whale and Dolphin Conservation in Plymouth, Massachusetts and she joins us to explain what's going on with these wayward whales. 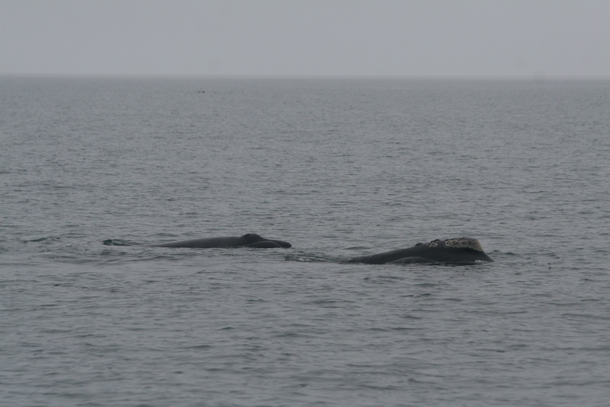 Wart with her newborn calf. (Whale and Dolphin Conservation. WDC acquired images under the authorization of NOAA/NMFS, it is illegal to approach a North Atlantic right whale within 500 yards) 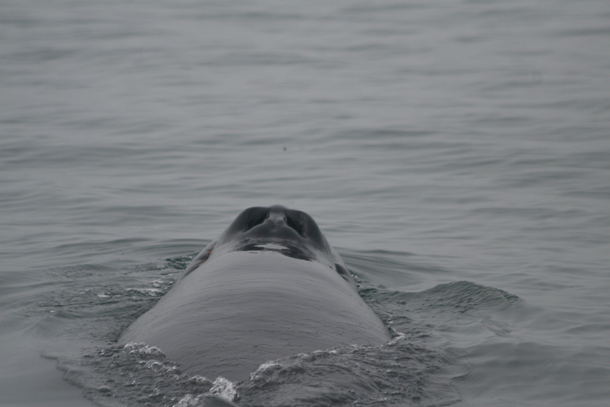 Wart’s calf won’t be named until it develops distinctive markings. (Whale and Dolphin Conservation. WDC acquired images under the authorization of NOAA/NMFS, it is illegal to approach a North Atlantic right whale within 500 yards) 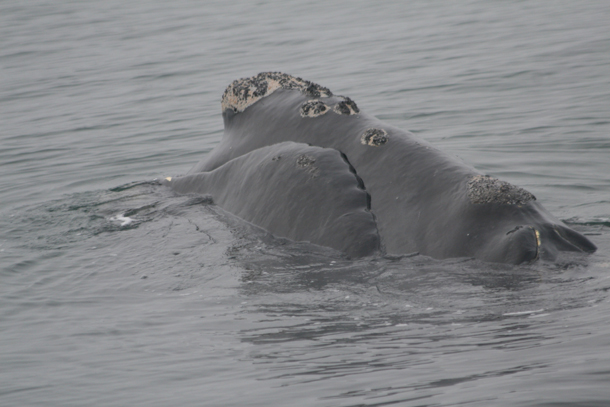 Wart has been known to scientists for several years. (Whale and Dolphin Conservation. WDC acquired images under the authorization of NOAA/NMFS, it is illegal to approach a North Atlantic right whale within 500 yards) 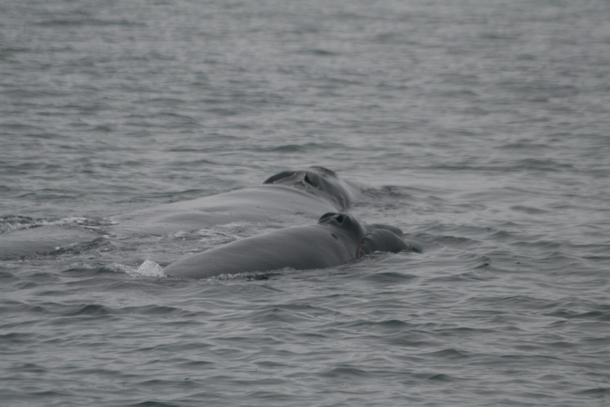 (Whale and Dolphin Conservation. WDC acquired images under the authorization of NOAA/NMFS; it is illegal to approach a North Atlantic right whale within 500 yards)

ASMUTIS-SILVIA: We don't normally see Right whale mothers and calves in Cape Cod Bay until April so this is the first confirmed sighting, I believe, we have of a mother and calf Right whale in the bay 27 years of data collection. We know they normally give birth in warmer waters off Florida and Georgia and maybe even the Carolinas, as far north as there. But we also know that the water temperature here is a lot warmer than we would expect this time of year. And it’s probably closer to April kind of water temperatures. So possibly, if there’s something triggered by water temperature and it’s a little warmer here, she might have thought it’s OK to have a calf here. 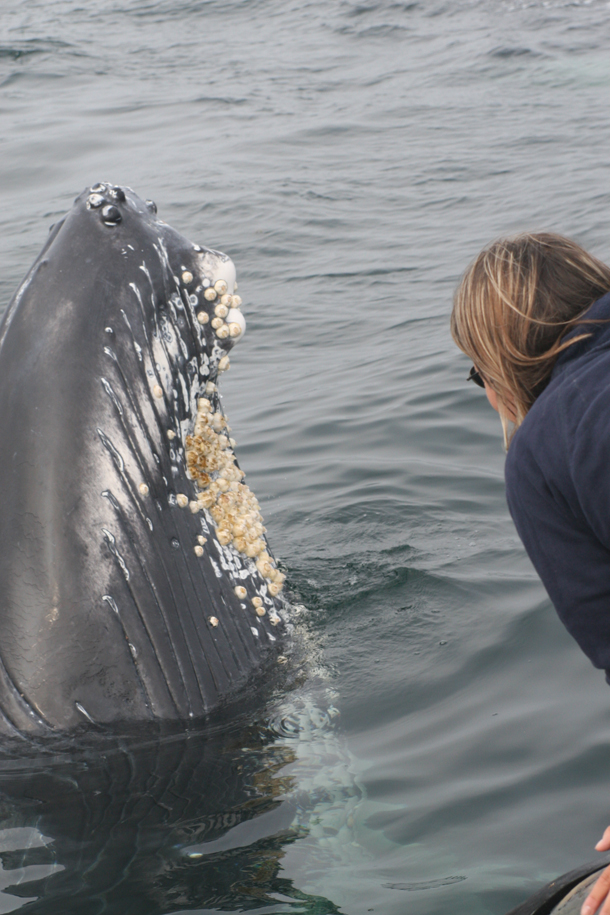 CURWOOD: Yes, this has certainly been a mild winter so far. And 2012 is now in the record books officially as the hottest year ever recorded. So how likely is it do you think that the climate has changed enough that Cape Cod Bay perhaps is now an appropriate maternity ward for Right whales this time of year?

ASMUTIS-SILVIA: I think that would be scary on a number of different levels because not only are Right whales critically endangered because of human impacts on them – vessel strikes, fishing gear entanglements, habitat degradation, noise pollution, chemical pollution – they have a whole lot of stuff that’s going against them. And we know they’re viable...they can calf, clearly...we just saw one. But they feed exclusively on zooplankton, these tiny little copepods, these tiny little animals that tend to be a very cold water species. And Cape Cod Bay is a place where they’re supposed to come and eat. So if the water temperature here is warm enough for them to calf, what that would probably mean is that it’s not going to be cold enough for them to come here and feed.

CURWOOD: Now what about the nuclear power plant there in Cape Cod Bay? The Pilgrim nuclear facility empties its wastewater into the bay, and that water comes out to be some 32 degrees warmer than the water in the bay as a whole. What effect might that have to the whales’ ability to calving in Cape Cod in January?

ASMUTIS-SILVIA: There’s certainly a lot of speculation. I think about what the impacts of the power plant are on the bay in general. There’s different kinds of chemicals they might use to clean aspects of the plant that are getting put out there. There’s some levels of radiation that are theoretically going out there. So I think the plant’s been operating for, I think, since the 70s...40 years or so. So I’m not sure that in itself is what would be attributed to this calving event because if it was the plant operating, it’s been there for so long that we would have seen this earlier.

Having said that though, because there’s a newborn calf there, and because the calves are exclusively feeding on the mom, and whatever toxins the mom builds up she dumps immediately into the calf through her milk, having a newborn calf in a place that has potential pollutants in the water is tremendously scary.

CURWOOD: Now this mother whale in question is known to scientists, I believe, by the name Wart, and at one point, she got all tangled up in fishing gear that scientists eventually freed her from. Can you tell me more about that?

ASMUTIS-SILVIA: Well, fishing gear entanglements are one of the two biggest threats to these animals, and it’s what we call fixed gear, fishing gear. So it’s things like lobster gear or crab gear, gillnet gear, whatever’s set to fish and stays in the water for some period of time before it’s hauled again out.

And the animals as mammals; they’re feeling very much the same kinds of things that we are. And the average time of death of an entangled animal is about six months. They typically die of some infection that they’ve acquired from the gear actually ripping into their skin, or starving to death because they can’t feed. And it’s a real long and slow and painful way to die.

They tried for a couple of years to get the gear off of Wart unsuccessfully. And their last attempt, and successful attempt, was in 2010, and they were able to remove the gear from her, but then they never saw her again. And so it’s a victory on a number of levels to have seen her here, not only because she’s obviously survived the entanglement, which is thrilling in itself, but also because she’s had a calf. So she’s healthy enough to have a calf and that’s another addition to this critically endangered population. So it’s a big deal sighting on lots of levels that it’s her.

CURWOOD: So what’s the name of Wart’s baby?

ASMUTIS-SILVIA: That whale won’t get named for a while. Right whales are individually identified by a unique pattern by what are called callosities, roughened patches of skin almost like callouses that are on their heads and on their chins and behind their blowholes. And it’s very similar to the places where we would grow facial hair.

And so they develop these big roughened patches of skin as they age a little bit. When they’re born, those patterns, those callosities, have not erupted yet. So this calf, less than two weeks old, doesn’t yet have those individually identifiable marks. Those callosities haven’t erupted. The calf’s going to stay with its mom probably for about 10 months to a year. So during that time, that pattern will erupt and be identifiable and be documented. And then, over a couple of years, once it’s stable and the whale can be identified on its own, that’s when it’s going to get to get named. Not quite yet.

CURWOOD: But no nickname yet, huh?

ASMUTIS-SILVIA: No, not allowed.

CURWOOD: (laughs) So how did you find this pair of whales? And what was your reaction when you discovered it was Wart, and she had a new baby?

ASMUTIS-SILVIA: I probably can’t say the reaction on the radio. The FCC won’t let me do that! But we went out to actually go see or find what we thought was potentially an injured or ill pilot whale. And based on the descriptions, we were told there was a 12-foot whale that was hanging around near some of the marker buoys in Plymouth Harbor.

When we saw something that was dark and at the surface and small, but it just didn’t seem like a pilot whale, I stopped the boat and kind of watched for a little while. And then said things that I can’t say on the radio. And then I called NOAA for authorization to approach it because there’s an approach distance that you’re not allowed to go near Right Whales. And I think they were equally as shocked that I would be calling about a mother-calf pair because that’s not where they’re supposed to be right now.

So we did approach for confirmation, and then we stayed with them, and we monitored.
The calf stayed at the surface for a long time. We monitored the mother’s respiration rates. We tried to look to make sure there wasn’t any gear on her, that she didn’t appear injured, and they sent a plane up and documented to tell us she was free of gear, and that she was fine. And then they were able to identify her as Wart. So it was very exciting.

CURWOOD: And just how big is Wart, by the way?

ASMUTIS-SILVIA: She’s a big girl, so probably somewhere between, you know, close to 50 feet long. And the calf is very, very small – probably is only about 12 feet long. So like I said, it’s a very, very young calf.

CURWOOD: How cute is this baby whale?

ASMUTIS-SILVIA: Oh my God, it’s adorable. To the point where it’s very vulnerable. It’s kind of one of those mixed feeling things where you look at it and you realize just how vulnerable that animal really is, and what a difficult road ahead that it has. So it’s mixed feelings of thinking, ‘Wow, it’s really really special and really cute’ to ‘I’m really nervous for this animal and I really really worry about its survival’.

CURWOOD: Regina Asmutis-Silvia is senior biologist at Whale and Dolphin Conservation. Thank you so much.

CURWOOD: And you can see Wart and her calf at our website, LOE..org.