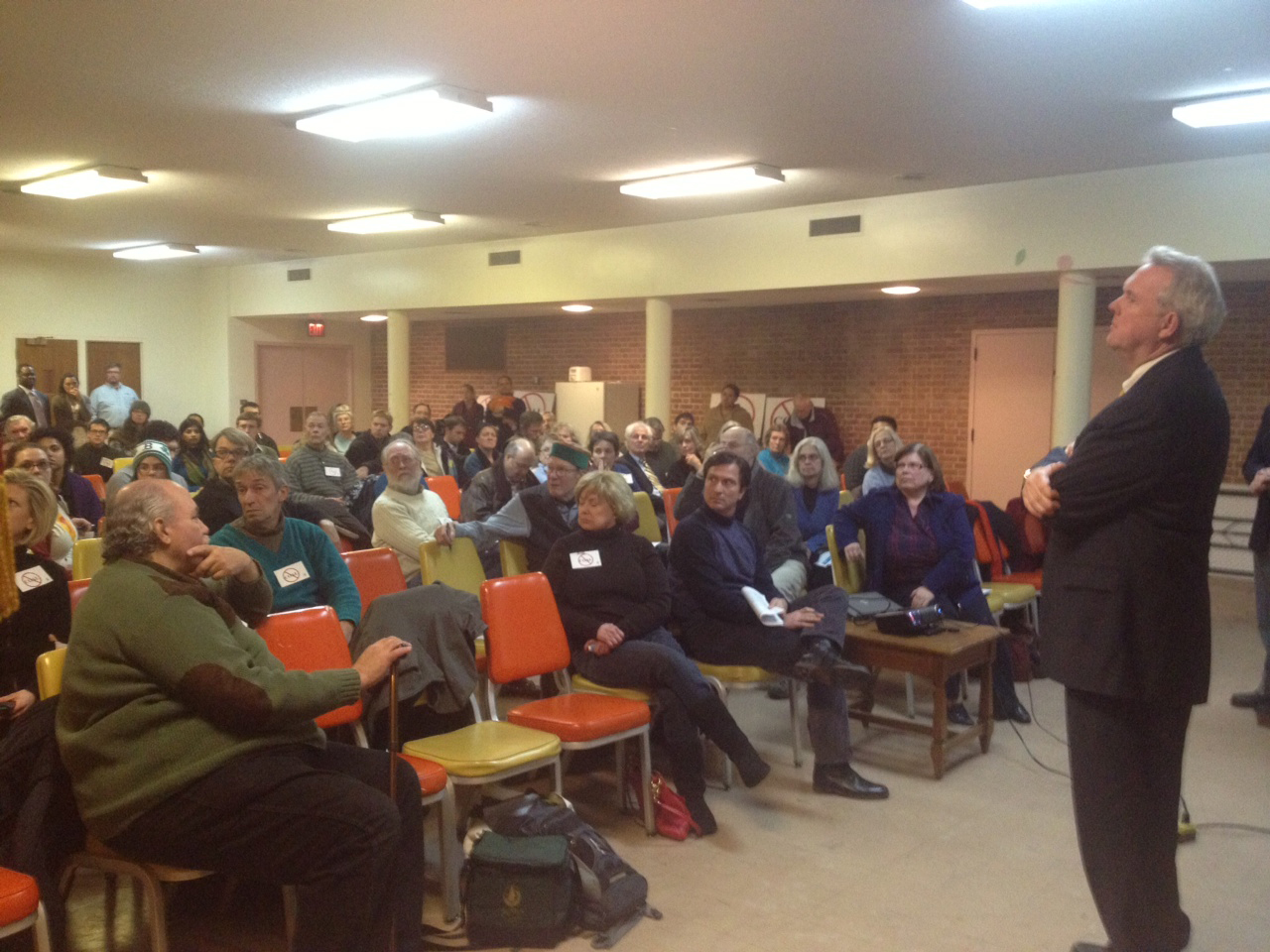 DC Councilman Tommy Wells speaking at a meeting of concerned residents of the neighborhood around the Capitol Hill Power Plant (photo: tommywells.org)

In 2009, Jeff Young reported on protests against the use of coal at the Capitol Power plant, which supplies energy to Capitol Hill. The plant has taken steps to transition towards natural gas, yet it still burns coal. Now DC City Councilman Tommy Wells wants to pass legislation that would prohibit the burning of coal inside the city forever. He joins host Steve Curwood to explain.

CURWOOD: Cheap and plentiful coal generates about 45 percent of global energy-related CO2 emissions, as well as dangerous particulates linked to thousands of deaths each year in the US alone. Coal use in the US has been dropping sharply over the past few years, but still, just a few blocks from where President Obama gave his inaugural address last month, the coal-burning boilers of the Capitol power plant continue to spew hazardous particulates into the air. And despite promises for many years to phase out coal completely there, the pollution continues—though it won't if a DC councilman has his say. But first, a bit of history.

CURWOOD: Back in 2009, 2500 hundred demonstrators took to the street to protest this plant - and coal use - and Living on Earth's Jeff Young went along.

YOUNG: NASA scientist James Hansen has been sounding the alarm on global warming for more than 20 years. But even for him, this was new. The renowned climatologist has risked his reputation at Congressional hearings and scientific gatherings, by pushing his view of what rising CO2 levels could bring. But now he’s risking something else. Arrest.

HANSEN: Well I can’t let these, I can’t talk about this problem and then let young people get arrested and I stand back, behind them.

YOUNG: Hansen shifted uneasily among a sea of young, scruffy demonstrators waving banners and banging makeshift bucket drums. In a few minutes they would march to block the gates of the US Capitol power station. Demonstrators see the nearly 100-year-old power plant as a symbol of an antiquated fuel that puts the future at risk. Coal contributes almost 40 percent of the country’s CO2 emissions. And Hansen says he simply does not see any way to avoid dangerous warming without turning away from coal.

HANSEN: I wouldn’t say I’m an activist. I’m trying to make clear what the connection is between the science and the policy implications. Somebody has to do it.

YOUNG: You know, you have a president in office who’s taking actions to address climate change, why protest now?

HANSEN: I think that’s a very good reason, because they’re going to take positions in the near future. So I initially didn’t like the idea, because Obama had not had time. But after thinking about it I decided this is the time to make clear what is needed in order to preserve species and the planet that’s existed for the last 10,000 years.

YOUNG: With that, Hansen joined the march to the smokestacks a few blocks to the south.

YOUNG: Chilly hours passed without any action by police. Roads and gates were blocked, federal property trespassed upon and still, Capitol police made no arrests. Eventually James Hansen and the other demonstrators declared victory and walked away.

HANSEN: Yes, I think this was a huge success and a step in the right direction. But it’s not the end. We can’t stop here.

YOUNG: Any disappointment at not getting arrested?

HANSEN: No! I have a lot of work to do. I would much rather get back to that!
[LAUGHS]

YOUNG: The Capitol power plant issue had already been settled, anyway, with a letter late last month from Congressional leaders Nancy Pelosi and Harry Reid. They instructed the power plant manager to phase out coal in favor of natural gas. A small, symbolic victory that anti-coal activists promise will not be the last.

CURWOOD: Since Jeff Young reported this story four years ago, the Capitol has begun to move away from coal power. And while it has reduced the amount of coal burned on the hill, it’s not enough for DC City Council member Tommy Wells. He says that it’s a mistake for the Architect of the Capitol, that’s the office that makes such decisions, to keep coal as a backup technology as it uses more natural gas. Councilor Wells is calling for a city ordinance that would prohibit the burning of coal in nation’s capital altogether.

WELLS: Burning coal is not appropriate in dense neighborhood areas. That plant is about three blocks away from three different neighborhood elementary schools – where children go out and play during the day. It’s about six blocks from my home as well. You can see the smoke billowing out from the plant, along with the steam. The neighbors report soot on their windowsills, in their house when their windows are open. We know that because it's a short smokestack the particulate pollution coming from the plant is right here in our neighborhood.

CURWOOD: We looked back at our archives. We saw that back in 2008 the national Capitol building was saying it would be carbon-neutral within a few years. 2009, when the Democrats controled both houses, they made the commitment to faze out the use of coal at the Capitol Hill power plant. What happened?

WELLS: Well, I am not sure what happened. I mean some would say that because there's a changeover in Congress that one party is more pro burning coal than another party. That really does lend itself to the fact that we need to just pass legislation that should not be subject to politics. It really needs to be subject to what’s best for the people that live around the plant. This is the last power plant of any kind in the District of Columbia, in the city, that burns coal. And certainly coal is one of the worst polluters. So we need for them to get on with their business of converting the plant to a state of the art co-generation gas plant and to really put a final point on that, I am proposing legislation to end the burning of coal altogether. It’s unsafe, and it really is unhealthy for the residents of DC.

CURWOOD: How supportive do think DC voters, DC residents, are going to be of this proposed change?

WELLS: I think DC voters would be pretty close to 100 percent. We really do not like burning coal in our city. Frankly, the number one pollution source in DC comes from coal-fired plants in neighboring states. And so if we can remove one more coal-fired plant from DC I believe that there's no question that the residents of the city will appreciate it. We have one of the highest rates of asthma in the country, in Washington, and we need to improve our air quality. Everybody wants to see that our children, and of course our seniors, who have worst outcomes from our air quality is bad, that everyone is taken care of.

CURWOOD: What's the timeframe for this, Councilman?

WELLS: I’m going to submit the legislation in a couple of weeks. I want to be sure that the legislation fully allows the Architect of the Capitol to convert the plant as they proposed to a modern plant, that is a co-generation plant with gas. They've applied to our permit office, the Department of Environment for DC, to convert it. But what they didn’t say is that they’ll end burning coal. But I want to give them enough time to convert, but then we put a final deadline saying no more coal after that date. And that’s what the legislation will do.

WELLS: Well, let's see exactly when the Architect of the Capitol will complete their conversion, but 2015 sounds great to me. It's really not soon enough, but we want to make it reasonable.

WELLS: You bet, thank you very much.

Info from the Architect of the Capitol about the power plant