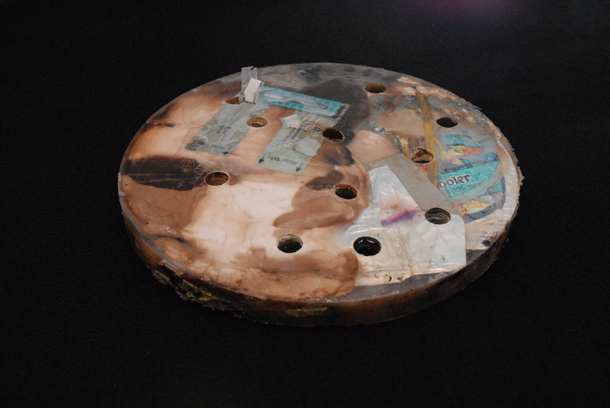 A prototype of the tiles made from space waste. The real thing will actually be square. (NASA)

Astronauts on extended missions in space create a lot of waste. John Fisher, a scientist with NASA's Bioengineering Branch tells host Steve Curwood that the agency has crafted a way to recycle the waste into tiles that can serve as radiation shields.

CURWOOD: When astronauts working in orbit around the Earth generate waste, they have little room to store it, and shipping it back to earth is costly. So NASA is working on a space station recycling program. Now that might bring to mind the scene in "Star Wars" when Luke Skywalker and his friends get trapped in the trash compactor on the Death Star.

[HAN SOLO: "I GOT A BAD FEELING ABOUT THIS.” CRUNCHING, SQUEAKS, WOOKIE MOANS. PRINCESS LEIA: "WELL, DON’T STAND THERE...TRY TO BRACE IT WITH SOMETHING!"]

CURWOOD: Well, in this case truth does mimic fiction. The NASA waste handling system crushes waste to a fraction of its original size, but fortunately the compactor is far too small to crush a person. That's according to John Fisher, a scientist with the Bioengineering Branch at NASA who listed the kinds of trash astronauts generate.

CURWOOD: So then, exactly how does it work?

FISHER: It's actually fairly simple. All that waste is collected from around the spacecraft. Then it's placed inside the heat melt compactor which on its inside is maybe about an 8-to-10 inch cube. And it's filled up, pushed in there as much as you can get in by hand, and then it crushes the waste. And during that time it starts heating it up to drive off the water content. Recycling water is one of the really important things they do as part of life support. So we continue heating and continue compacting it until you compact from maybe something about 10 inches deep to about one-tenth or slightly less than that of its volume. The temperature eventually goes up to something over 300, 400 Fahrenheit and the plastic that's in there melts and encapsulates the waste. And then we cool it down and we bring it out and what you have is kind of a hard plastic tile with most of the other waste materials embedded inside of it.

CURWOOD: So what do you do then with these hard tiles? What could they be used for?

FISHER: We get these tiles that are about eight inches square, by maybe one inch-thick, and we use these with cargo transfer bags. These are used for bringing up equipment and they're going to be designed to have pockets and such in them so that we can put these items up against the wall insert the tiles into it and then they can function as radiation protection for the crew. Radiation protection works best when the substance you're using contains a lot of hydrogen, and plastic contains a lot of hydrogen as well as carbon, which is still a relatively good material for radiation protection.

CURWOOD: So where does all the energy come from to do all these processes?

FISHER: Well, on a spacecraft like International Space Station, it mostly comes from solar panels.

CURWOOD: Some might say why go to all of this...I mean there’s a lot of space out there, literally, and its loaded with tons of junk, I mean, old satellites, spent rockets, even the paint chips from those rockets and such. What danger or harm would there be to adding to that? Why not just pitch the waste out of the window so to speak?

FISHER: Well, that's a good question except all of those objects are moving at orbital speed, which are in the neighborhood of tens of thousands of miles per hour maybe 20,000 miles an hour. Those kinds of objects if you're not moving the same direction they're moving, they’re coming at you - it’s like a high velocity bullet aimed at you so even though there is as you say, a fair amount of debris out there, its larger pieces are attracting and kept account of, at least at this point in time there's not enough of it in low Earth orbit, for instance, where the space station is located that it’s a threat to the station.

CURWOOD: I would guess that this idea of recycling in space is even more important for longer missions, say, getting outside the territory of the Earth and moon towards Mars.

FISHER: Well I think that is one of our objectives, that many people would like to see the agency mount a mission to go to Mars. The typical classic Mars mission is about three years long; it’s roughly about nine months out and stay there somewhere like a year and a half, and then nine months back. So for long duration missions like that, yes, it's extremely valuable to recycle as much as possible.

CURWOOD: John Fisher is a scientist with the Bioengineering Branch at NASA . Thank you so much, John.

More about the Bioengineering group at NASA