Amazon Deforestation on the Rise 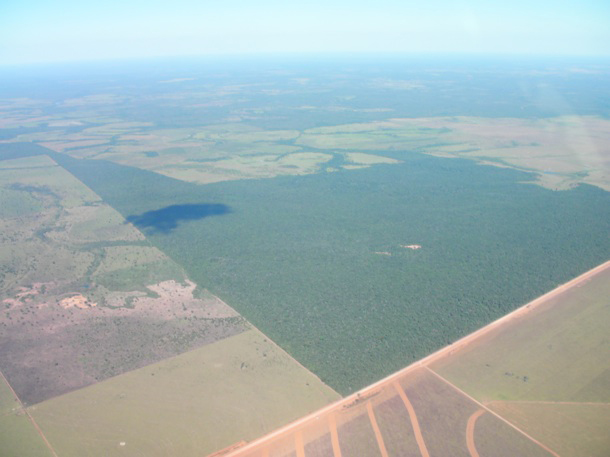 Amazon landowners must keep forest on 80% of their land. (Photo: Bobby Bascomb)

After more than 6 years of steady declines the deforestation rate in the Brazilian Amazon has more than doubled in the last six months. Observers blame the deforestation in part on changes that weakened Brazil’s Forest Code. Living on Earth’s Bobby Bascomb reports on that, and new citizen initiatives to monitor what's happening in the Amazon region.

CURWOOD: Tropical forests are vital lungs for the planet, but always at risk from deforestation and development. Brazil, though, has dramatically reduced deforestation; from 2005 to 2011 rates of destruction in the Brazilian Amazon dropped some 80 percent. But in the last half of 2012 the pace of deforestation more than doubled. Paulo Barreto is a Senior Researcher at the non-profit research institute Imazon.

BARRETO: Imazon uses satellite images to evaluate monthly the deforestation. From August 2012 up to January we have seen an increase in deforestation. It’s about 120 percent higher than the same period in the previous year.

CURWOOD: Now there are several possible reasons for the rise in deforestation and one principal factor relates to changes in Brazil’s Forest Code, which protects the rainforest by limiting how much land can be cleared and developed. In May of 2012 the Brazilian Congress proposed changes to the law that had been protecting the Amazon for more than 50 years, and Living on Earth’s Bobby Bascomb brought us that story.


Cattle and soybeans are by far the largest drivers of deforestation in the Amazon (Photo: Bobby Bascomb)

BASCOMB: In the 1950s and 60s the Brazilian government encouraged people to go to the Amazon and make it productive, grow food to feed an impoverished country.

[ARCHIVE DOCUMENTARY MUSIC UP THEN UNDER]

DOCUMENTARY: It is not enough to build roads. We must colonize for agriculture or for cattle. The land is good. There are green pastures in the forest made of milk and honey.

BASCOMB: 92-year-old Jospe Perrer de Brito was one of those early settlers.


Jospe Perrer de Brito and his wife inside their home. Jospe paddled here in a canoe to work in agriculture in 1958. (Photo: Bruce Gellerman)

DE BRITO: When I first came here I came by paddle in 1958. There were only wild Indians living here.

BASCOMB: De Brito paddled up the Rio des Mortes, in a dug out canoe. He came to farm and raise cows.

DE BRITO: When I first came here, there was a lot of free land. Now every piece of land has been grabbed up by people. There was a lot of forest, very big. Not anymore. The people chopped it down. I think things will be worse if they chop down all of the forest.


Since the government started collecting data in the 1970s an area of rainforest nearly the size of France has been deforested to make way for agricultural production. (Photo: Bobby Bascomb)

BASCOMB: Today, half a century since De Brito paddled up the river, 150 million acres of forest has been chopped down, in spite of the Forest Code that requires land owners to keep 80 percent of their property forested. It’s called the Legal Reserve and people that cut down their Legal Reserve must reforest it and pay fines. Yet 4.6 million agricultural producers are in violation of the law.

RIEDEL: It’s a very complex situation where it made 90 percent of the producers outlaws.

BASCOMB: Eduardo Riedel represents those producers as Vice President of the National Federation of Agriculture and Livestock. He says Brazil needs the new Forest Code Congress just passed because the current law is out of step with reality. The new code would create an amnesty for people that illegally deforested before 2008. People will not have to pay the fines as long as they reforest the degraded land.


Roads cut through the forest bring settlers to the Amazon and agricultural products out to ports. (Photo: Bobby Bascomb)

BASCOMB: But environmentalists and scientists see two problems with that rationale. First is the problem of enforcement. The Brazilian Amazon is roughly half the size of the continental United States, yet has just 400 environmental police to patrol the region and enforce laws. A second concern is that the amnesty clause could actually spur more deforestation. Daniel Brindis is a forests campaigner for Greenpeace, based in Brazil.

BRINDIS: The message is that you can violate the law with impunity. There might be another round of amnesty on the way or you don’t need to take the code seriously.

BASCOMB: A piece of land cleared and ready to grow soybeans or graze cows is far more valuable than the same piece of land with trees on it. So Brindis says that farmers and ranchers are choosing to deforest now, assuming another pardon will come along later.


Philip Fearnside is a research professor with the National Institute for Research in the Amazon. (Photo: Bobby Bascomb)

BASCOMB: Another change in the law directly encourages deforestation by allowing land owners to cut down trees closer to river banks. The Amazon Basin is full of meandering rivers with broad bands of dark green forest along them. The new code requires a narrower forest buffer along the rivers. That troubles Philip Fearnside, a research professor at the National Institute for Research in the Amazon.

FEARNSIDE: Those riverside forests are very important in terms of avoiding flooding and so forth and they’re also very important for biodiversity because those are the corridors that allow animals and plants to move between the different patches that are left after deforestation has advanced.

What keeps biodiversity viable is having some connection between those little patches that are left. By eliminating these areas of permanent protection you have a much greater impact on biodiversity than cutting the same area of forest somewhere else. It’s the worst place to have that extra clearing to be allowed.

BASCOMB: Most scientists agree that the new Forest Code will increase deforestation and reduce biodiversity. And Fearnside says the majority of the Brazilian public are against the changes as well.

FEARNSIDE: Brazil is now over 80 percent urban so most of the population has no direct economic stake in being allowed to deforest more. Opinion polls show most Brazilians are against this legislation but the lower house of Congress passed last May by a margin of 7 to 1 for something that’s basically against the interest of the majority of the Brazilian population.


Property owners are allowed to develop some land and must keep some as forest. From the sky the north of Brazil looks like a patchwork of forest and agricultural land. (Photo: Bobby Bascomb)

FEARNSIDE: That’s a good question. You have a very powerful ruralist lobby that has a tremendous amount of money. Big soy bean planters and ranchers contribute to this. It’s presented as favoring small farmers but money and influence comes from wealthy land owners. It shows very much the balance of power, which has shifted to be very anti-environmentalist.

BASCOMB: The fate of the new forest code rests on the pen of Brazilian President Dilma Rousseff. When she campaigned for the job she promised to balance economic development with environmental conservation. She has continued to say that she would veto any provision that allowed amnesty for illegal deforestation. The Brazilian public is holding her to that promise with a widespread campaign known as “Veta Dilma” – “Veto the forest code President Dilma”.

President Dilma Rousseff has the power to veto the new forest code but congress could overturn her veto. (Wikimedia Commons)

The slogan even made its way to an awards ceremony for the former president Lula, hosted by a famous Brazilian actress Camila Pitanga.

PITANGA: Mr. President I will break protocol for a moment, only to ask you one thing...Veta Dilma.

[CROUD ERUPTS WITH CLAPPING AND CHEERING]

CURWOOD: That’s Bobby Bascomb’s report from May of last year. And Bobby joins me in the studio now to talk about what’s happened since then. Hi, Bobby.

CURWOOD: So, what did president Dilma Rousseff decide in the end?

BASCOMB: Well, she used her line item veto to strike down 12 provisions proposed by Congress. That achieved more protection for the forest than the Congress wanted but far less than what the original law provided. And now, as predicted, deforestation is suddenly rising after years of decline. Paulo Barreto from Imazon says weakening the forest code is one of the principle reasons.

BASCOMB: On top of that there’s also been a rise in the market price of agricultural commodities like soy and cattle, which are the biggest drivers of deforestation in the Amazon. And then there’s another factor, hydroelectric dams…

BASCOMB: Yeah, there are about 60 hydroelectric dams in the works and the government has removed protection from the parts of the forest where they're planned. It’s not that much forest but the bigger issue is that farmers see the government developing in protected areas and think, why can’t I?

CURWOOD: So, all these factors together are causing deforestation rates in the Brazilian Amazon to double?

BASCOMB: Exactly, but it’s important to note that the deforestation data has not been confirmed by the government - officials stopped releasing monthly data a couple of months after the rate of deforestation started to increase. Observers I talked to think the decision to suddenly stop reporting that information is political. One of them is Gustavo Faleiros, he’s a Knight International Journalism Fellow.

FALEIROS: We start realizing that the Brazilian government is delaying a lot the release of new data on deforestation. And we realized that deforestation was increasing. So, it was impossible not to ask yourself why the government was delaying so much this data.

BASCOMB: Gustavo's set up a website, called InfoAmazonia to get the information out.

CURWOOD: And how does that work?

BASCOMB: Well, the website collects data from satellites and other sources and compiles it in one place where you can build your own maps of the Amazon, all nine countries. And there are layers of real time data on mining, oil concessions, cattle ranching, hydroelectric dams… all the biggest drivers of deforestation. And the results can be really powerful. When you overlay cattle ranching with deforestation, for instance, it becomes pretty obvious that there’s a close relationship there.

CURWOOD: So, the whole is greater than the sum of the parts here.

BASCOMB: Yes, but there’s one more really cool thing. There’s another map layer and that’s journalists’ stories from the Amazon.
So let’s say you’re looking at a map of gold mining in Peru, you can then click on icons that will take you to stories about Peruvian gold mining, and later this year InfoAmazonia plans to incorporate data collected by citizens. So, small NGO’s, scientists, or indigenous groups can collect data on water quality or wildlife for example and upload it to the website. Gustavo thinks this kind of information is important to the world, not just Amazonian countries.

FALEIROS: Well, the Amazon is for sure like the mirror of humanity in a way. A lot of people are looking, what are we going to do with the last pristine area in the world. Everyone wants to see if we’re going to be able to hold that thing for the future.