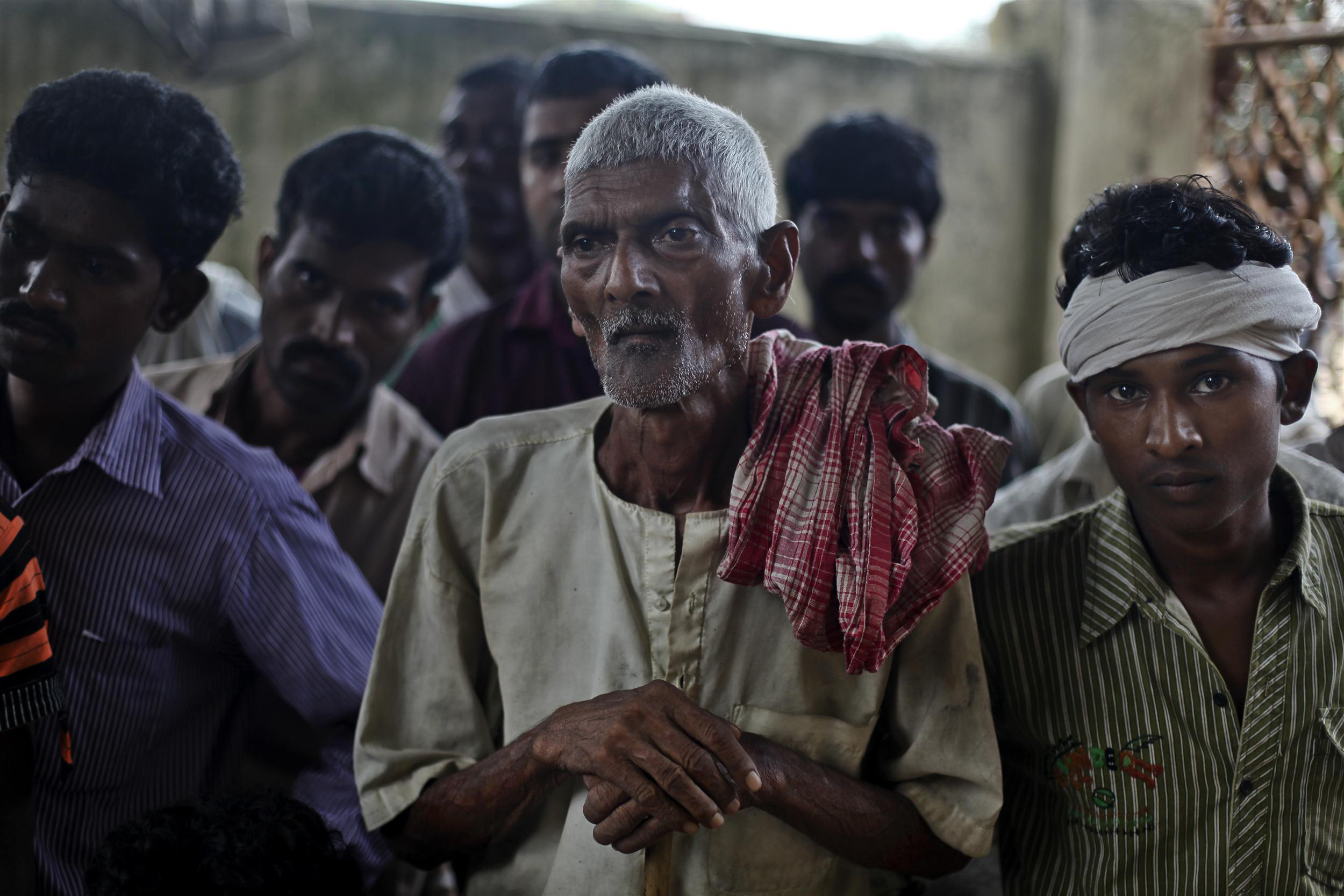 Local residents turned out in large numbers to attend public meetings about the impact coal mining has had on people, livelihoods and the ecology (photo: Greenpeace)

India is developing rapidly, and much of that growth is fueled by one of the dirtiest energy sources, coal. With even more coal plants planned, a new study shows that pollution from coal-fired power plants is killing up to 115,000 Indians every year. Report editor Ashish Fernades joins host Steve Curwood to discuss the state of coal in India.

CURWOOD: From the Jennifer and Ted Stanley Studios in Boston, this is Living on Earth. I’m Steve Curwood. India has posted spectacular growth rates over the past decade, but it's been fueled largely by one of the dirtiest energy sources, coal, and there's a price to pay in public health. A recent study in India calculated that last year alone, pollution from burning coal led to between 80,000 and 115,000 premature deaths. Ashish Fernandes is a Senior Campaigner for Greenpeace who edited the report, and he joins us in the studio now. Welcome to Living on Earth.

FERNANDES: Hi. Thanks a lot.

CURWOOD: So how surprised were you by these numbers?

FERNANDES: We were surprised by the numbers. We didn’t think they would be this high, but frankly we had no idea of how high they would be because this is the first time anyone has done such an exercise. The important things to remember with these numbers is that while it may seem like its a whole lot higher than what it might be in the U.S. or Europe, there are a number of reasons for that. 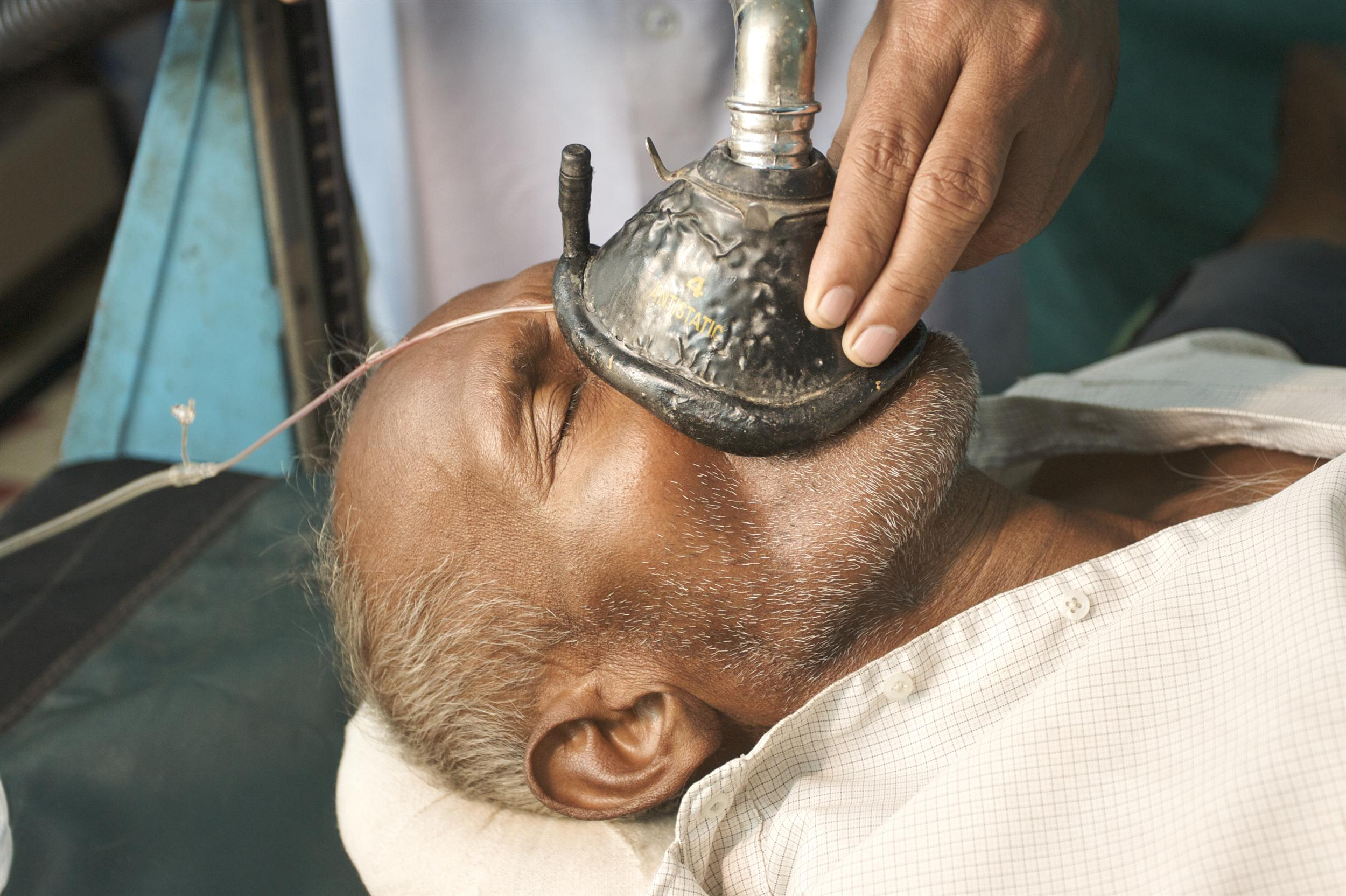 Bhagwat Saw, 69, in the emergency section at Life Line Hospital. Bhagwat has been working as a coal loader for over 40 years and was discovered to be suffering from pneumoconiosis before having hernia surgery. (Photo: Greenpeace) 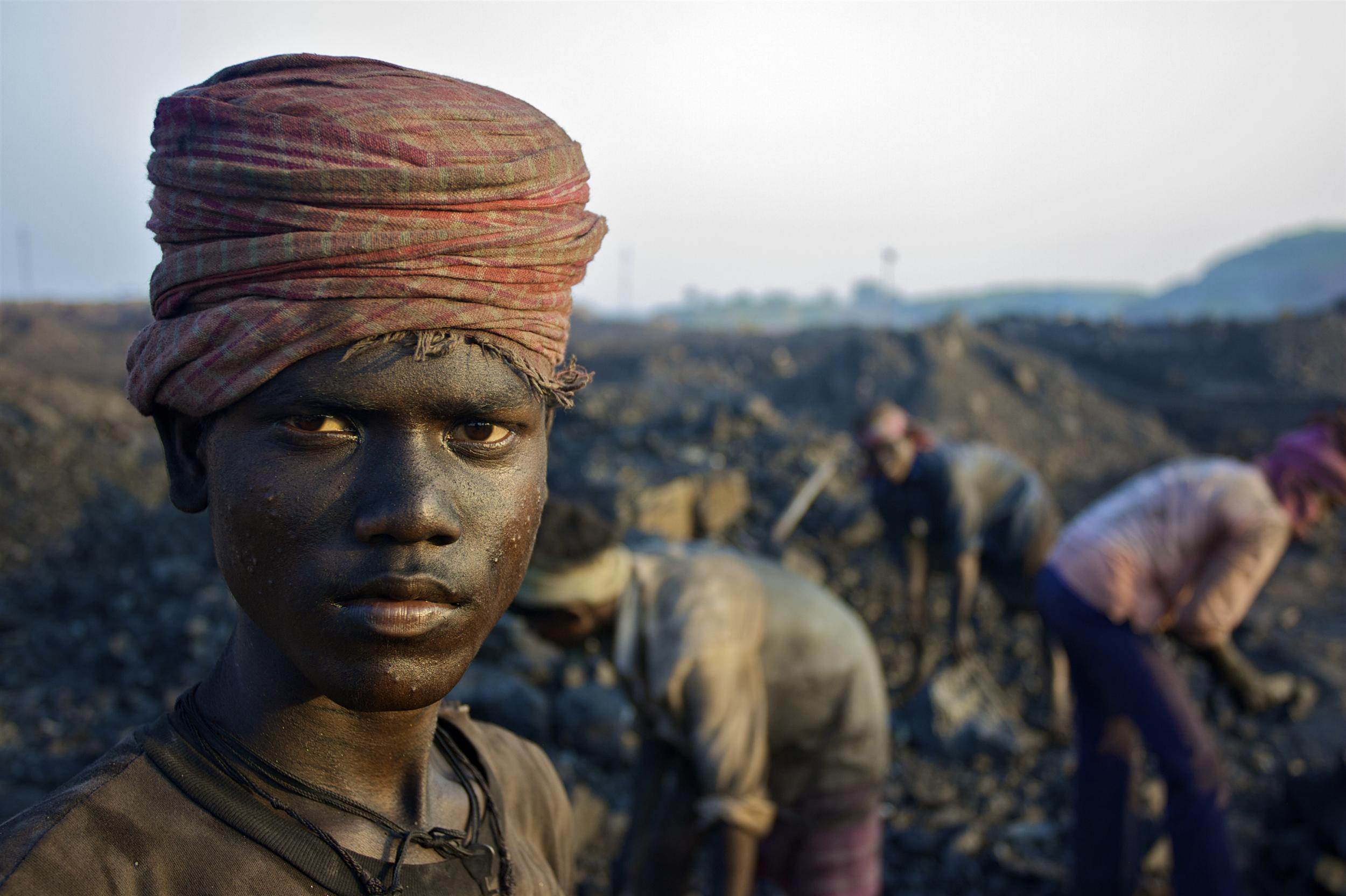 Coal worker, Ashiky, 22, in Jharia coal mine. Jharia is one of the most important coalmines in India and one of the largest in Asia. (Photo: Greenpeace) 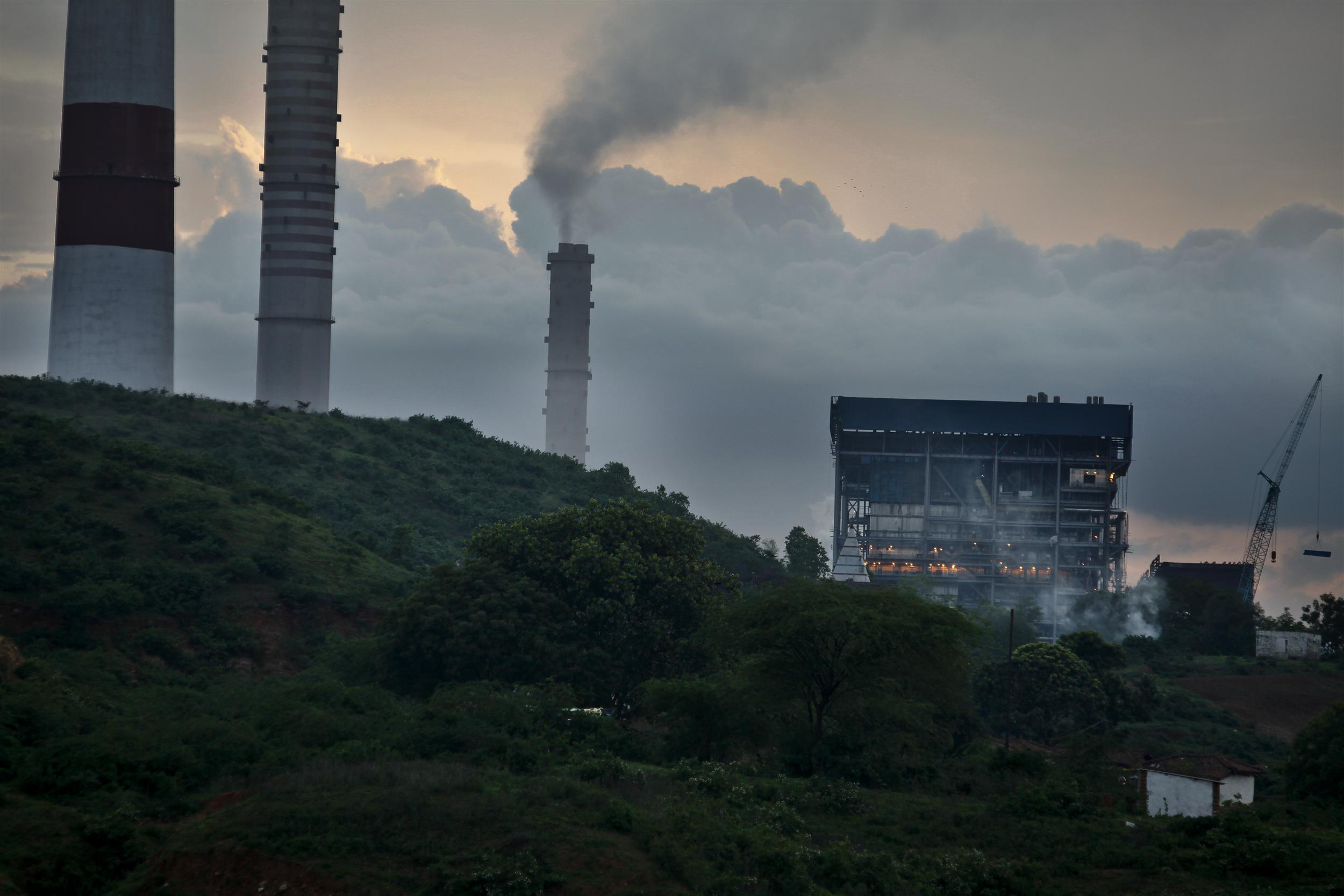 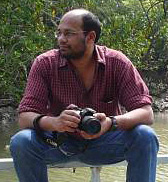 Secondly, the coal has very high ash content, 40, 45 percent ash. Therefore, you’re going to have higher particular emissions. Because of the high ash content there’s low calorific value, so you have to burn a lot more coal to get one unit of electricity. Therefore again higher emissions. And lastly, the standards in place in India are either very low or nonexistent. So for particulate emissions standards, they’re really low. For sulfur and nitrous oxides, emissions standards just don’t exist. We don’t have any limits on those. You’re talking about really high emissions and no one knows what the specific plant by plant emissions are because there is no daily monitoring.

CURWOOD: So how do India’s regulations for coal compare to that, say, of the United States and Europe?

CURWOOD: What exactly are people dying of?

CURWOOD: The study says as many as 10,000 children under the age of five are dying from this air pollution. What might be killing them?

FERNANDES: Well, asthma is extremely common in most urban and semi-urban areas of India now. Partly because of coal-powered emissions, but in general air quality is mostly low in big Indian cities. So asthma among children is really really common.

CURWOOD: So, how are these health problems felt throughout the country, equally spread or some folks are more affected than others?

FERNANDES: Actually, that’s a great question. It’s not equally spread for a number of reasons. One is of course, the concentrations of where those plants exist. So if you look at a map of India, there’s a large number of these power plants located toward the eastern section of the country, in the center, and in the north. Secondly, you have to take in account wind patterns. And we have the monsoons different times of the year. The wind patterns are different. And the wind patterns take the emissions over different populations. Those plants that are located in less urban areas, or not close to big cities, are usually surrounded by low-income neighborhoods. So you have disproportionate impact felt by low-income residents.

CURWOOD: Now the United States is beginning to transition away from coal as a source of electricity generation, but India is going through such intense industrialization. What does the future hold for coal in India right now?

FERNANDES: It’s funny that you say that because you’re right - the Indian government is currently putting all its eggs in coal’s basket, if you like. They see coal as being the major delivery mechanism for electricity in India for the next 20, 30, or 40 years. That is really kind of misplaced.

Coal is not really going to be able to deliver India’s energy security. And the reason I say that is, one, our reserves in terms of how much coal we actually have left is probably overstated. The fact that Coal India Ltd., that’s the state owned coal miner, has missed its production targets for the last three years in a row is an indicator of that.

We cannot really import large amounts of coal because it’s simply too expensive to generate power by importing coal. Most of the coal we import is low quality coal from Indonesia. I know there’s talk in the US of India importing coal from the US coal mines as they shut down, as they stop their domestic supplies, but that’s just fool’s talk really, because coal from the US is going to be way too expensive for India to afford. Remember, most of the country lives on less than $2 a day. They’re not going to be able to afford coal from the US. So imports are not really a major option. And that’s why you’re seeing India currently has a power shortage of 10 percent, nine or 10 percent. And that’s because coal is not delivering.

CURWOOD: How concerned are Indian citizens about the health risks associated with coal-fired power plants?

What has not really happened is there hasn’t been much opposition on the health ground so far. And that’s why this report is actually quite important because it sets up the perspective to say this is not something we can ignore. This is a serious issue. You’re talking about thousands of people dying. And it’s something that the Indian government really needs to wake up to. Health needs to become an issue because India currently continues to plan thousands of gigawatts of new coal. And at the moment those new plans don’t include state-of-the-art pollution control limits. At the very least, any new plants being proposed need to have state of the art pollution control limits. Existing sources need to be regulated properly and monitored, and the old most inefficient power plants can be fazed out right now.

CURWOOD: What about alternatives to coal? What’s India doing along those lines?

FERNANDES: The bright spot I would stay on the horizon is that India’s renewable energy success stories are really coming out. So we still have about 400 million Indians who don’t have access to electricity around the clock. They’re not connected to the grid. They can’t flick on a switch and have light in the night.

Decentralized renewable energy is actually much cheaper to get them power as opposed to extending the grid 100 kilometers to the most remote village. The renewable industry has been going as a much faster pace over the last two or three years, both wind and solar now especially. And the Indian government has set fairly ambitious targets for solar for the next five years after 2017. But in terms of policy incentives, there’s probably still a lot more to benefit those two sectors. A combination of renewables, whether it’s solar or wind or biomass, that has potential to get power to people who so far have not gotten power from the grid.

CURWOOD: Ashish Fernandes is a Senior Campaigner for Greenpeace. Thanks for coming in.

FERNANDES: Thank you. Pleasure to be here.