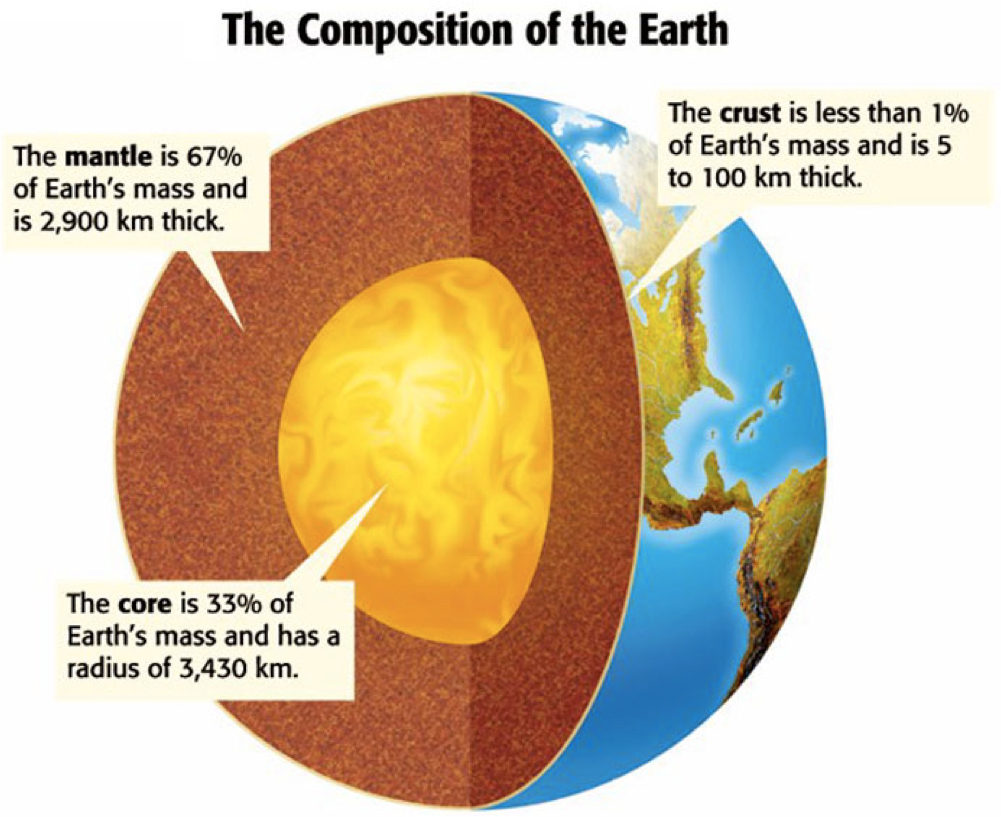 Most of Earth’s carbon lies below the crust. (Wikimedia Common)

Researchers at the Deep Carbon Observatory are probing the biosphere deep underground, which could give a clue to the origin of life on Earth. DCO Executive Director Robert Hazen tells host Steve Curwood about the exploration of the diverse and abundant forms of carbon below the surface.

CURWOOD: It’s Living on Earth, I'm Steve Curwood. NASA just came up with some provocative news – more evidence that life could have existed on the Red Planet before it arose on Earth. Scientists announced that a drill sample brought up by the Mars Rover contained carbon as well as other elements necessary for life. And here on the blue planet, researchers have discovered tiny organisms deep underground that could be kin to those martian discoveries. The Deep Carbon Observatory has just published this finding, along with many others, in a compendium, called “Carbon On Earth.” Robert Hazen is its Executive Director of the Deep Carbon Observatory.

HAZEN: Yes, the Deep Carbon Observatory is a 10 year effort, we have 1000 investigators in 40 countries. This is an amazing adventure, and by bringing scientists from all over the world, physicists and chemists, geologists and biologists; in an integrated way we’re tackling this fundamental question in new ways.

CURWOOD: Help me with a little bit of basic chemistry. What's really cool about carbon as an element?

HAZEN: Carbon’s different from all the other elements because it bonds to itself so easily and in so many different ways. So you can start with a single carbon atom, and then start adding other atoms to it. You can add hydrogen, oxygen, nitrogen, sulfur and phosphorus or you can add more carbons to make a chain of carbon. You can make a ring of carbon. You can make branching structures that grow larger and larger. So, for example, polymers; everything from your hair and muscle fibers to the fabrics that make up your clothes and the plastics that we use all around us. Those are carbon-based molecules that are incredibly flexible.

You know, carbon is fundamentally the most important chemical element there is. It’s the element of life. Every biomolecule is based on carbon. It’s the element associated with most of our energy resources, and, of course, then it’s tied to environment and climate, but also new materials and all of the economic benefits that come from carbon-based materials. This is fundamentally important. Carbon is different from all other elements in that regard.

CURWOOD: Talk to me about microbes. I understand you've found evidence of deep microbial life, and not just a few feet under the surface of the Earth, but way down there.

HAZEN: Go down a mile, two miles, maybe five or six miles, and you'll find microbial life. Now this is very different from the kinds of microbes you see at the surface because they're sparse; they live very slowly; some of them hunker down and don't do anything perhaps for 1,000, 10,000, 100,000 years. And yet they’re persisting down there. And if you take all those microbes that live underground it's a significant fraction of all the biomass on Earth, but it's hidden from us. We really don't it understand yet. That's an exciting frontier.

CURWOOD: Now how do these microbes operate? It’s kind of hot, isn’t it?

HAZEN: Think about early Earth where the microbes first evolved. It was incredibly dangerous at the surface. You had harsh ultraviolet radiation. You had volcanoes. You had meteors and asteroids impacting the surface. The surface is a nasty place. If you could find a nice safe haven deeper underground, maybe that was the benign, not extreme place. So we know these microbes survive. They learn to live with very very little energy, and it's the energy that comes from rocks and minerals that chemically interact with water and other fluids deep underground. 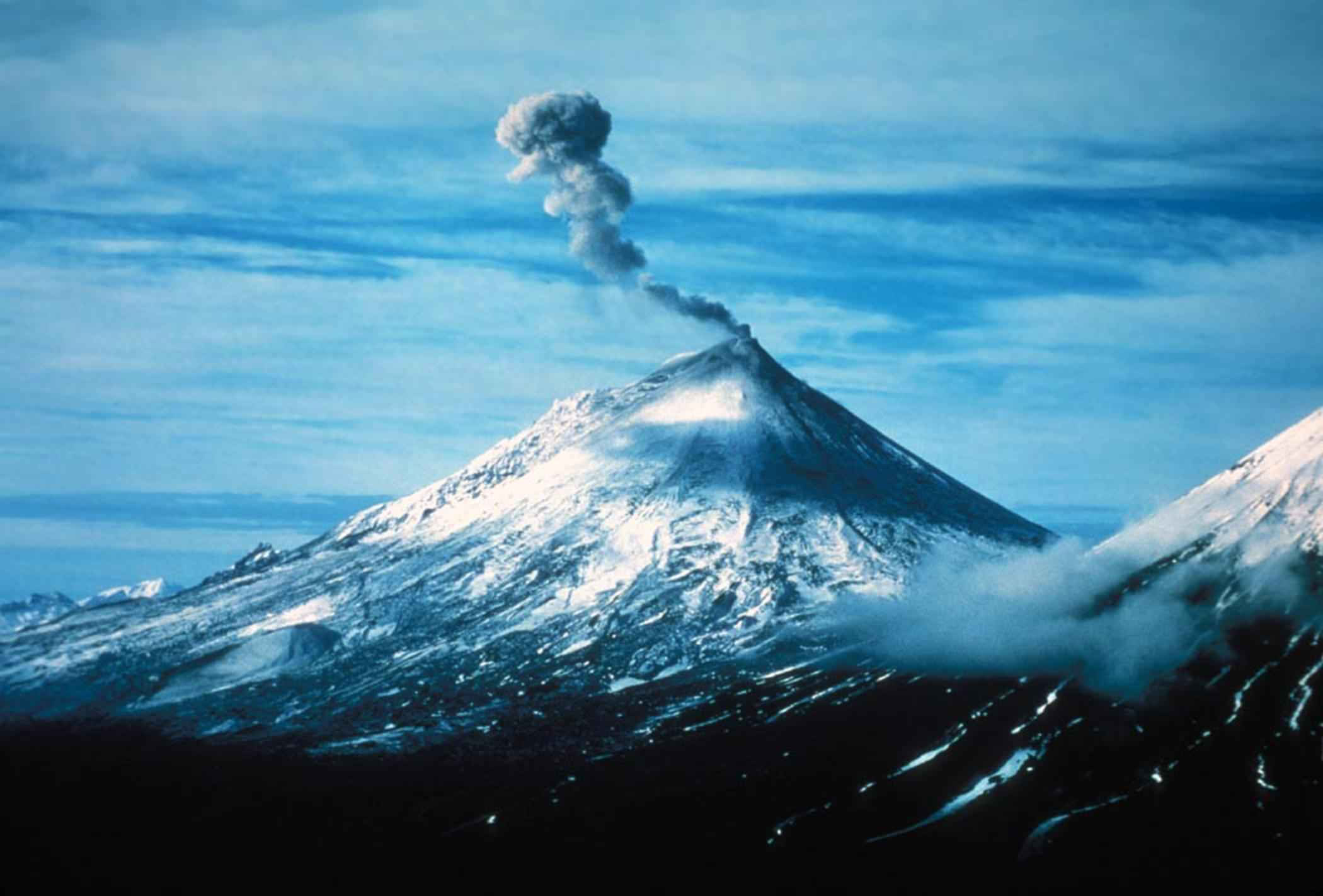 Volcanic activity is one area of the Deep Carbon Observatory investigation. (Wikimedia Commons)

CURWOOD: So, this might be the life that we would find on Mars?

HAZEN: Exactly. The idea of Martian life is the idea of deep microbial life. And here's a really amazing thing. You know Mars was warm and wet before Earth, and so many NASA scientists and members of the Deep Carbon Observatory as well are looking at Mars as possibly the place where life originated and then meteorites get blasted from the surface of Mars. They come to Earth, they may very well have delivered those deep microbes billions of years ago, and that microbial life may be what seeded life on Earth. This is a real plausible idea that life originated on Mars and, therefore, we are all Martians.

CURWOOD: I understand that there may be viruses way down there?

HAZEN: Wow, this such an exciting thing! There's another whole realm that I don't think any of us ever even thought about. Viruses, which give us the flu which gives you chickenpox - these viruses also live many miles beneath the surface.

Viruses common among human life could have ancestors below Earth’s crust. (Wikimedia Commons)

But there's a difference. The deep “virusphere” as it's called, infect cells not by killing them, not by giving you, you know, where a virus infects a cell and kills it and makes more copies of the virus. But deep down there are not enough cells; you don't want to kill them. So the virus takes its DNA, it inserts its DNA into cells, that DNA can stay there for tens of thousands, maybe hundreds of thousands or even millions of years, just being passed from one generation of cells to the next, without the virus itself ever making copies of itself. And only when there's a flood of new nutrients and the cells start dividing might the viruses release themselves. So these deep viruses are everywhere, extremely abundant, and yet they’re very passive in the way they behave.

CURWOOD: So what findings have you made, you think might get made, in this process that might change our current climate models?

HAZEN: Of course, atmospheric and ocean compositions are fundamentally important, but we think that also understanding the fundamental way that carbon interacts with rocks and minerals may provide the baseline of knowledge that will allow us to tackle potential climate change problems. Are there ways, for example, of sequestering carbon efficiently underground? Are there ways that you could take microbes - living things are very good in precipitating limestone in coral reefs, for example. Could we take microbes, perhaps engineer them and alter them so that they could then more rapidly sequester carbon? Rocks, minerals, life. They’re all so closely connected together that you can't change one system without changing the others. And even as life and humans in particular are changing global environment, so Earth can change and ameliorate those effects if we understand how it works. That’s what the Deep Carbon Observatory is all about, understanding how Earth works as a planet.

CURWOOD: So what implications for energy production does your research have?

HAZEN: The Deep Carbon Observatory is not looking for new energy resources per se, but making fundamental discoveries about where hydrocarbons come from, about how they're distributed in the deep Earth interior, finding new deposits and new ways of forming hydrocarbons, much much deeper suggests there may be resources that we haven't tapped yet, and that there may be mechanisms for forming and processing hydrocarbons that we haven't yet realized.

CURWOOD: So at the end of the day what's really going to come out of this research, do you think? 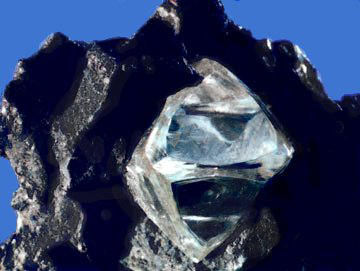 HAZEN: There are lots of things we know we don't know. We don't know how much carbon is coming out of volcanoes and so we’re going to be measuring that. We’re going to be measuring and detecting these deep microbial communities. We’re going to learn new things about how diamonds form. There’s lots of things we know we don't know, and we’re going to make progress on those. What really excites me, what keeps me awake at night is discovering things that right now we can't even anticipate. But I'll tell you one thing where there's a hint of discovery, which just I find so extraordinarily exciting.

We’ve talked about deep life, but that deep microbial life can only persist to about 130 degrees Celsius. Any hotter and we don't find cells. But it looks like we're finding something. And since the origin of life, there have been places on Earth where 130 Celsius and above have persisted. It's persisted more than four billion years in Earth history. So we may be glimpsing some kind of stage in the origin of life that’s still on Earth today, is still reproducing in its very slow methodical flat way on mineral services. That's a possible discovery. I won't make any claims, but stay tuned over the next seven years. You may be getting some really big headlines.

Robert Hazen’s page at the Carnegie Institution for Science site

“Carbon In Earth” page at the Deep Carbon Observatory site