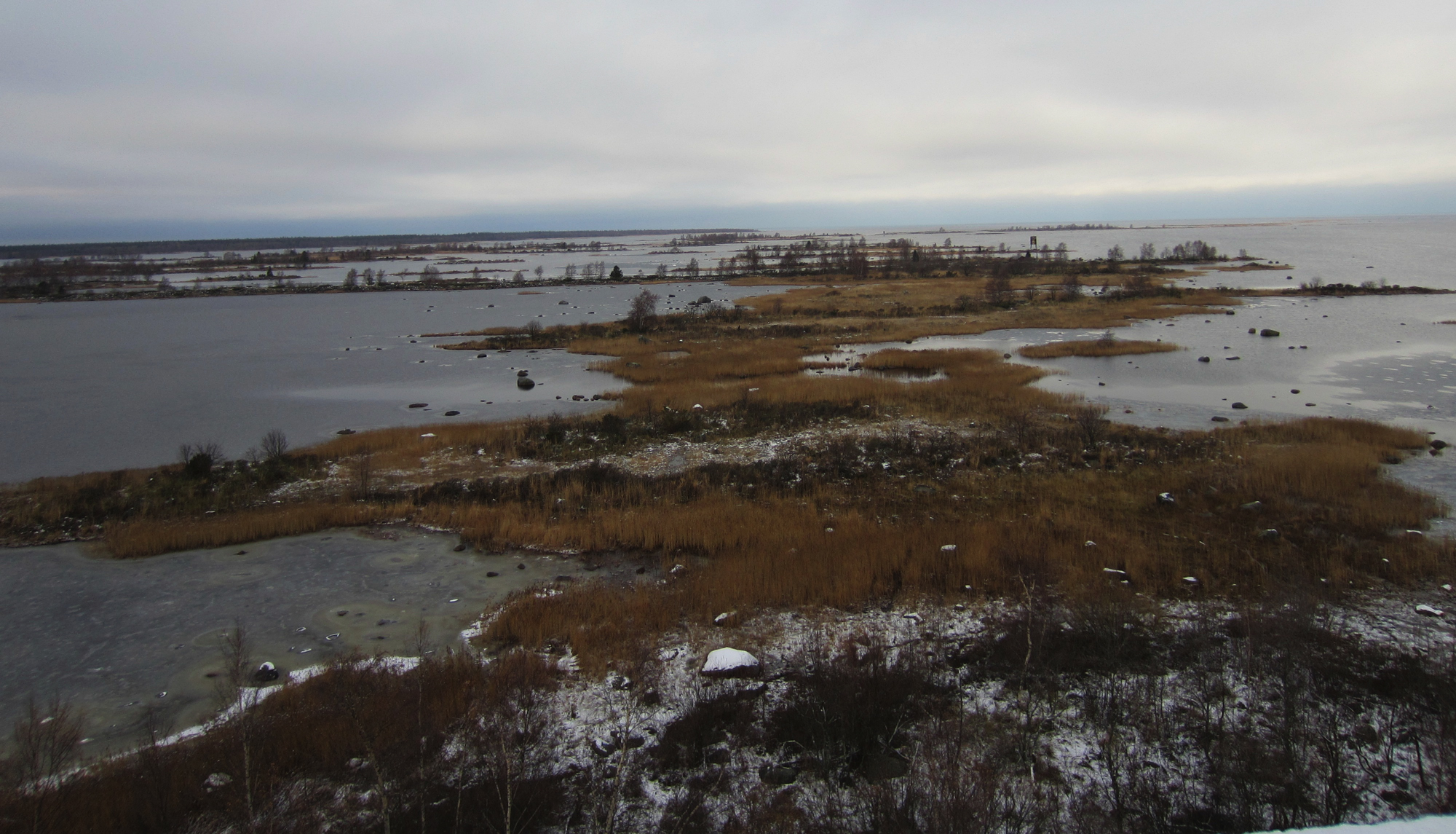 Sea levels are rising around the world, swamping coastal areas as the climate changes and ice cover shrinks. Yet in some parts of Scandinavia the land is rising even faster than the sea, at least for now. From Finland, Rae Ellen Bichell reports.

CURWOOD: The mean global sea level is now rising about 3 millimeters per year, or about an inch every decade. And even if that rate stays steady, the oceans will eventually flood coastal areas and displace millions. But there are a few places in the world where, at the moment at least, the land is actually rising faster than the swelling seas. From Finland, Rae Ellen Bichell has our story. 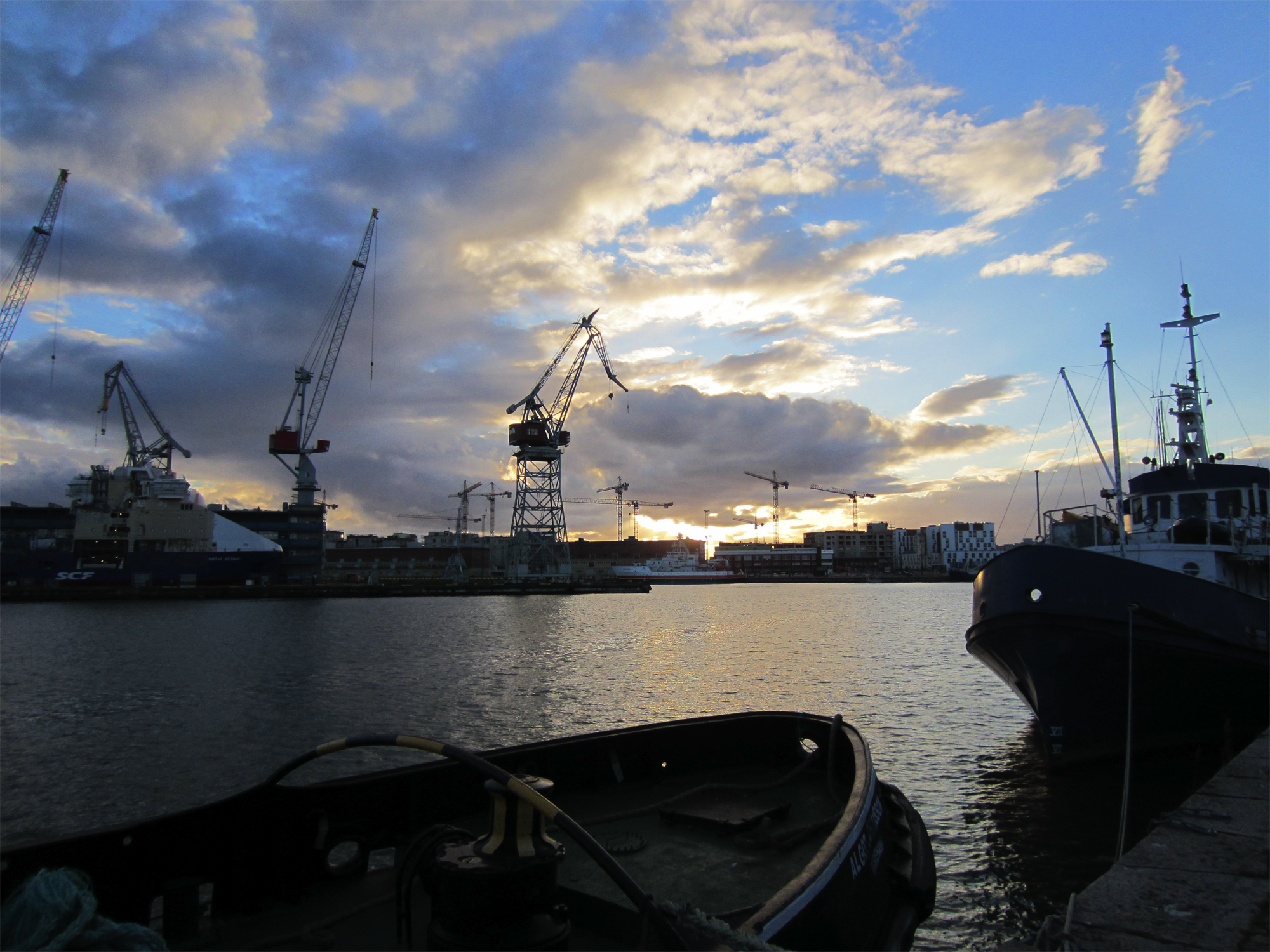 On the coast of Helsinki Finland, the land and the sea are rising at about the same pace, between 3 to 4 millimeters per year. (Rae Ellen Bichell)

EHRS: You’ve probably heard this, what Mark Twain said to his son: ‘Buy land, my son because it’s the only thing not made anymore. It’s a good investment.’ But here, in Ostrobothnia, land is actually made. 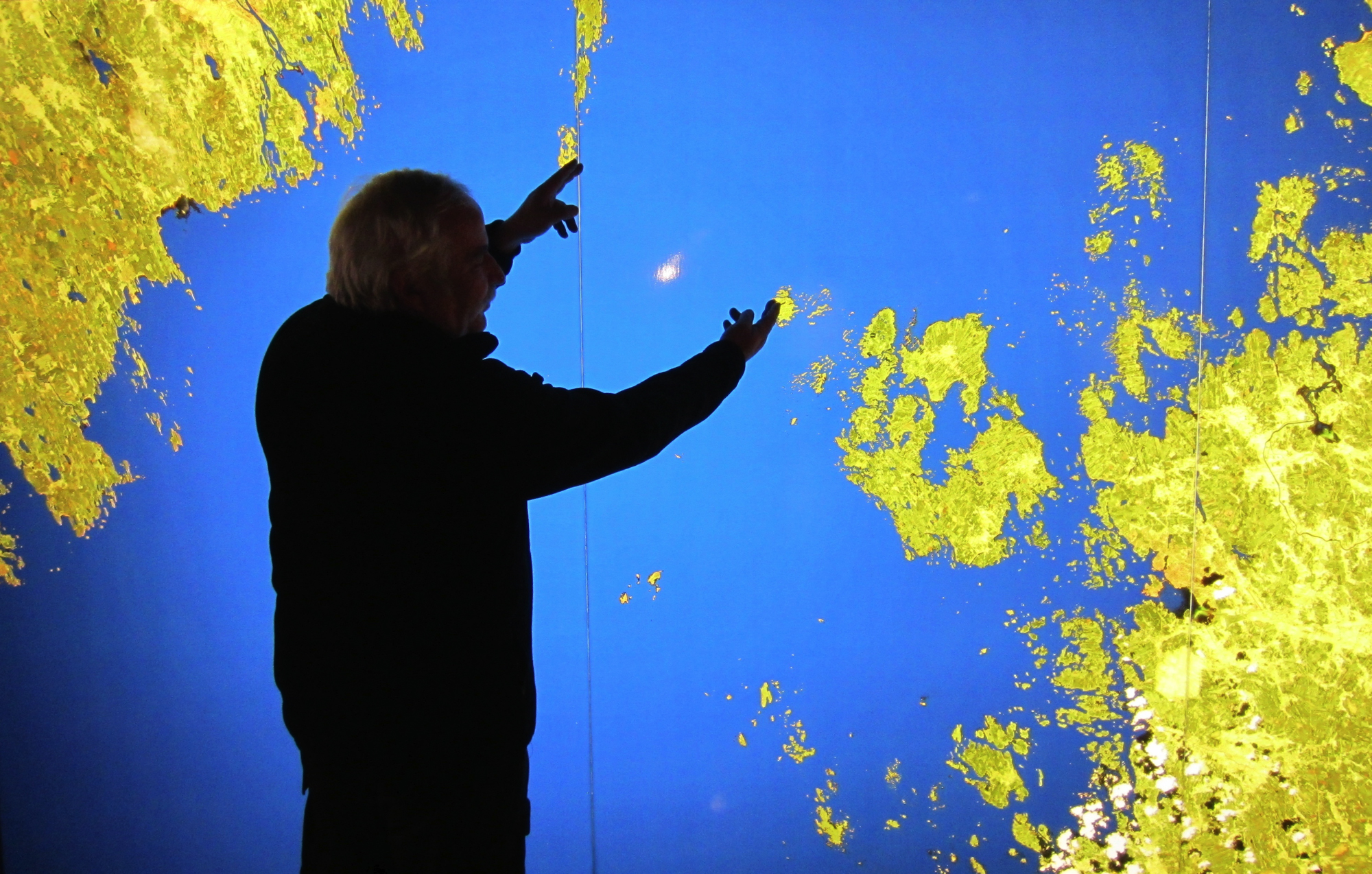 10 miles of open water now separates Sweden and Finland. In 2,000 years, the countries may be connected by a land bridge- if the swelling seas don’t outpace the rising land. (Rae Ellen Bichell)

BICHELL: That’s Susanna Ehrs, who lives in Vaasa, a city located about halfway up Finland’s western coast, in an area called Ostrobothnia. For the past 20,000 years, the land she now stands on has been rising out of the sea, fast enough for her to notice newly emerged patches of rocks and marsh reeds.

EHRS: Where my parents have their summer cottage, where I used to go and swim and we had our boat, it’s dry land today. So it’s, like, a bit over 10 inches in just thirty years, the land uplift. So it’s actually visible, yes.

BICHELL: Here’s why. During the last Ice Age, a heavy glacier weighed down this area, thicker here than anywhere else on the Eurasian plate. Ever since the mile-high slab of ice melted away, the region has steadily bounced back up—it’s now rising vertically between eight and nine millimeters per year, about as fast as fingernails grow. But because the ground is so flat, Finland is growing in size by an area equal to about 200 football fields per year. 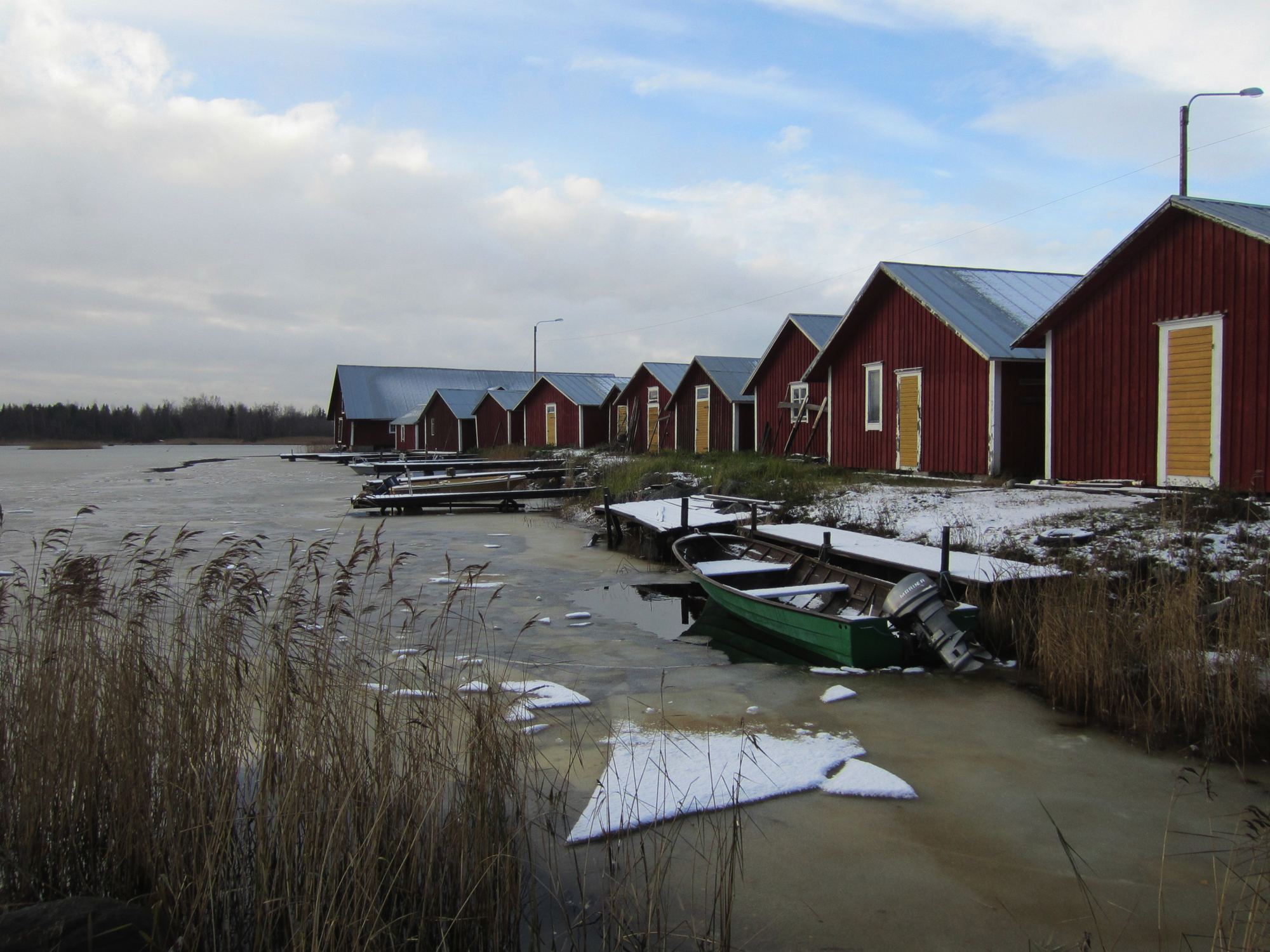 At the Svedjehamn harbor, fishermen’s boats started scraping bottom in the 1920’s. Like many larger harbors on Finland’s western coast, it has had to migrate with the expanding shoreline. (Rae Ellen Bichell)

Anita Storm runs a small museum on the island of Replot in the Kvarken Archipelago. She says the only place to observe land uplift is from 60 feet above it, from a lookout tower facing the UNESCO World Heritage site that honors this geologic rarity.

STORM: We have no high points, no viewpoints. So this is a really important thing to get up in the air to get a clue about what the land looks like.

BICHELL: So, we have some little rocks that are scattered out in the ocean there. And those will probably be, in the next, I don’t know, 10 years? They’ll be on little tiny islands.

BICHELL: The appearance of a scraggly new island creates a problem—who owns it? For a long time, nobody cared. They were just a bunch of rocks—useless for agriculture. Now, though, the Finnish Land Survey has an entire office that deals with landowners who want to lay claim to their expanding properties. Jan-Erik Mouts says there’s also an older, local system in place for the same reason.

MOUTS: The, what we call samfällighet, and that is this community taking care of this common land, common water. 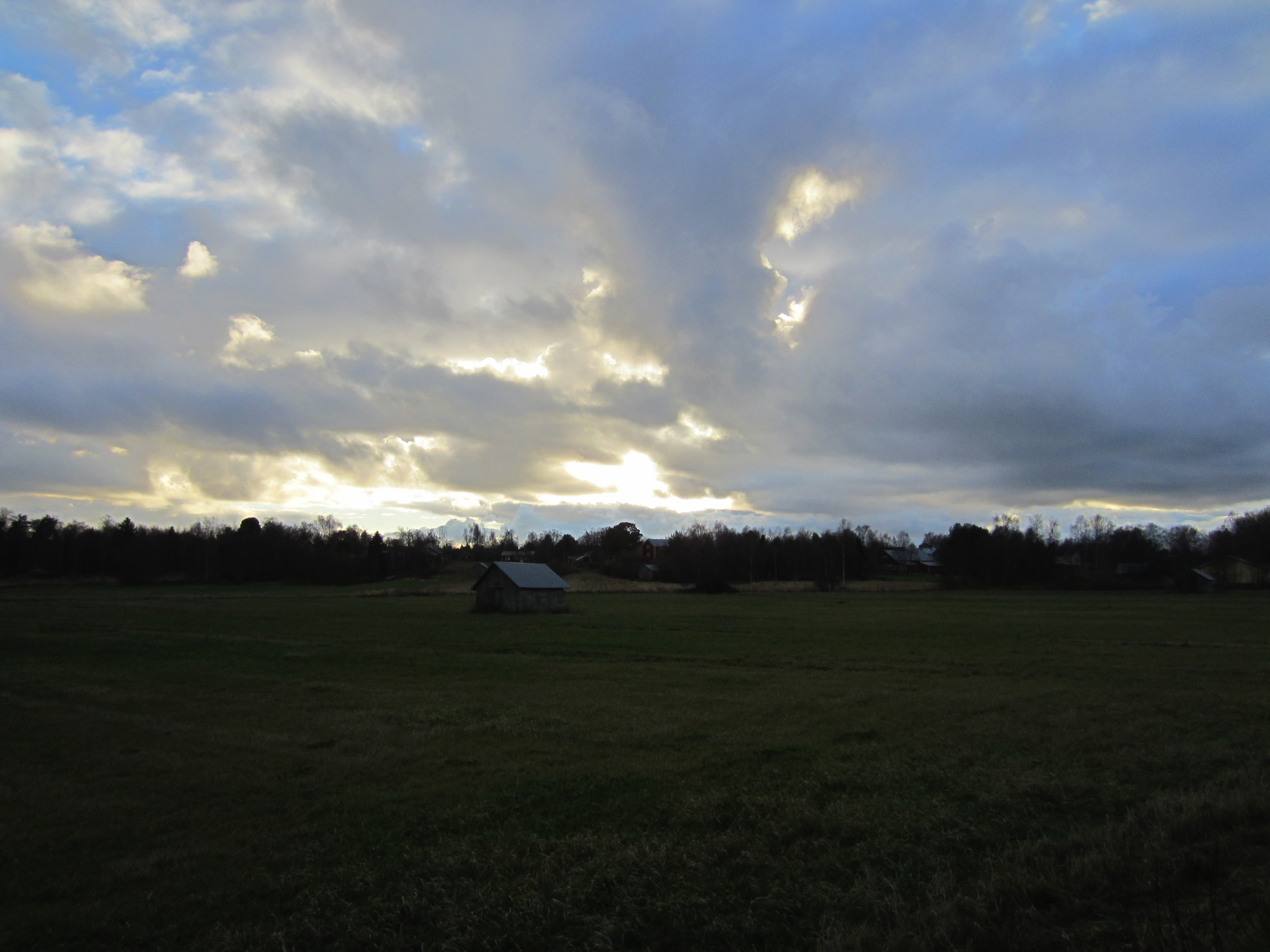 Just a couple centuries ago this field was covered in water. (Rae Ellen Bichell)

BICHELL: By day, Mouts works at an energy company, but he’s also the leader of his village’s samfällighet, or ‘village commons,’ an organization set up 200 years ago to handle the question of just who owns this extra land. The system varies village by village.

MOUTS: In our village in Vestervik, we have decided that we will sell that to the one that is owning land from before and his shoreline is receding. So, he can buy that for himself. But in another village next to us, they have decided that any new island that is coming up is kept by the samfällighet, and that is common, common land for everyone in the village. So, they have not sold those islands. Instead, if somebody would like to build a summer cottage, they can rent that island.

BICHELL: For summer cottage owner Mikko Vesaaja, there are a few reasons to dislike about emerging land.

VESAAJA: It’s quite big problem if you want to warm, for example, sauna and go to swim and you have no water in front of you. And you have to swim in the mud.

BICHELL: Finns take vacation homes and saunas very seriously. The country has about one sauna for every two people. And in Ostrobothnia alone, there are over 21,000 summer homes, about one for every three families living in the region. Locals and vacationers tend to have trouble with their boats running aground.

VESAAJA: I had a boat, [LAUGHS] but it was too often in the stones. So I sold my boat [LAUGHS]. I don’t have boat anymore.

BICHELL: The rising coastline can be a headache for Vaasa’s city planners, too. The harbor has been moved at least seven times since 1600, and the city now has to decide whether to move back closer to the shoreline, as they’ve done before. Susanna Ehrs again.

EHRS: The whole city, it was located a few miles further east, like in the inland. Because that was then the coast, back then. Then, a decision was taken to move the city farther west to the waterfront, where it’s located today. And now we’re noticing the same problem, that was that the harbor—the port of Vaasa—it’s getting a bit shallow. Dredging has to be made every now and then, just so the great big cargo ships can come into the port. So, the land uplift is starting to, like, again take its toll.

BICHELL: Climate change has brought more severe storms and floods, and globally most coastal cities face an uncertain future. Even though land here is rising, that doesn’t mean Finns are safe from the sea. Kimmo Kahma is a senior researcher at the Marine Research Division of the Finnish Meteorological Institute.

[SOUND OF GAUGES AT THE FINNISH METEOROLOGICAL INSTITUTE]

BICHELL: Kahma and his colleagues manage a network of tide gauges that measures the height of the sea relative to land about once per minute. In Helsinki, Finland’s capital, there’s a tight race between the rising land and the warming sea—they’re both swelling at about the same rate.

KAHMA: Here, the land is rising only 3 to 4 millimeters per year, which means that it’s almost the same as the global sea level rise now, which is about 3 millimeters. So, it’s a very tight competition.

BICHELL: Do Finns still need to worry about changes in the global sea level?

KAHMA: Everybody has to worry about it, but we’re not really in the most vulnerable place.

BICHELL: Though it may seem painfully slow, the competition between the sea and the land is the geologic equivalent of an Olympic sprint. Climate modelers expect the sea to rise a foot or more by the end of the century, so some of Finland’s newfound land may slide back under the water. Still, if humans somehow manage to roll back carbon emissions and slow global warming, in a mere 2,000 years, Finns and Swedes may be able to walk across a freshly risen land bridge connecting their countries.