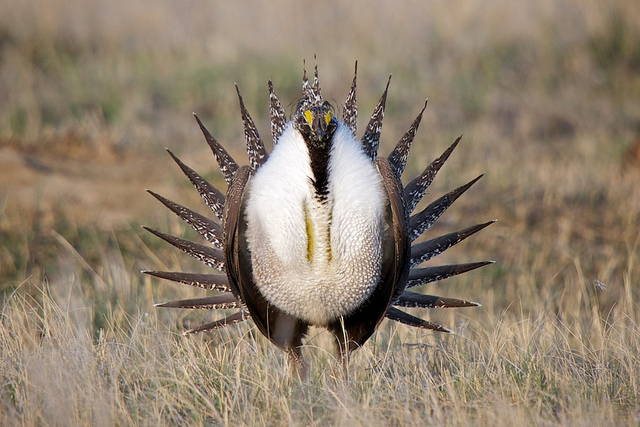 In spring, male Greater Sage-Grouse go to traditional areas, called leks and compete to lure females to mate with elaborate and noisy displays. But as Michael Stein reports, the birds are endangered.

CURWOOD: Well, as Sarah Uhlemann noted, habitat loss is a major threat to many creatures - including one of our very own - the Greater Sage-Grouse. The US Fish and Wildlife Service has concluded the birds do need Endangered Species Act protection, but other creatures are even more threatened, so they'll have to wait. Meantime, as Michael Stein explains in today's BirdNote®, Sage-Grouse put on a wonderful show.

STEIN: Dawn breaks across the sagebrush country of the West on a brisk March morning. 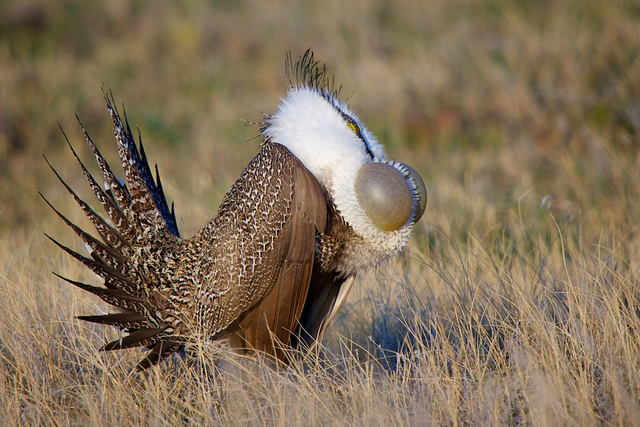 As the sun rises, meadowlarks begin to sing.

And we can now see the Sage-Grouse clearly. The enormous males are over two feet long, and weigh six pounds. They stand bolt upright, their long tails fanned like a turkey’s tail, the dark backs and bellies contrasting sharply with their white breasts. When they display, the sage-grouse simultaneously scrape their wings back and forth against their flanks, expel air from twin, fleshy chest-sacs the size of tennis balls, and call softly. The resulting sound combines swishing, popping, and cooing.

At the display area, known as a lek, the male Sage-Grouse perform for mating rights with the smaller females looking on.

As lands formerly covered in sage are converted to agriculture, so goes the fate of the magnificent Sage-Grouse. In some areas, the grouse have less than ten percent of their historical range. 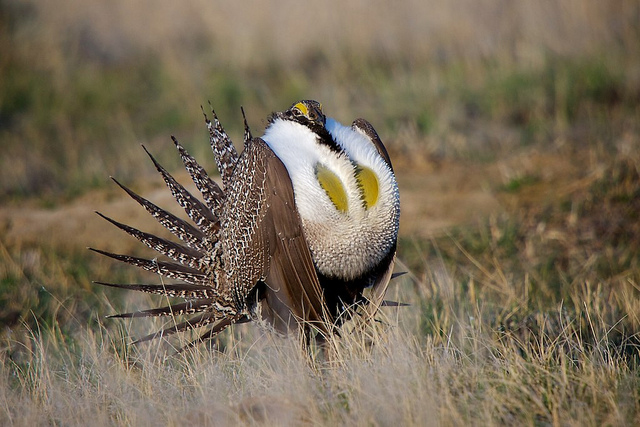 I’m Michal Stein
CURWOOD: To see some photos of the Sage-Gouse and leks, strut on over to our website loe.org.