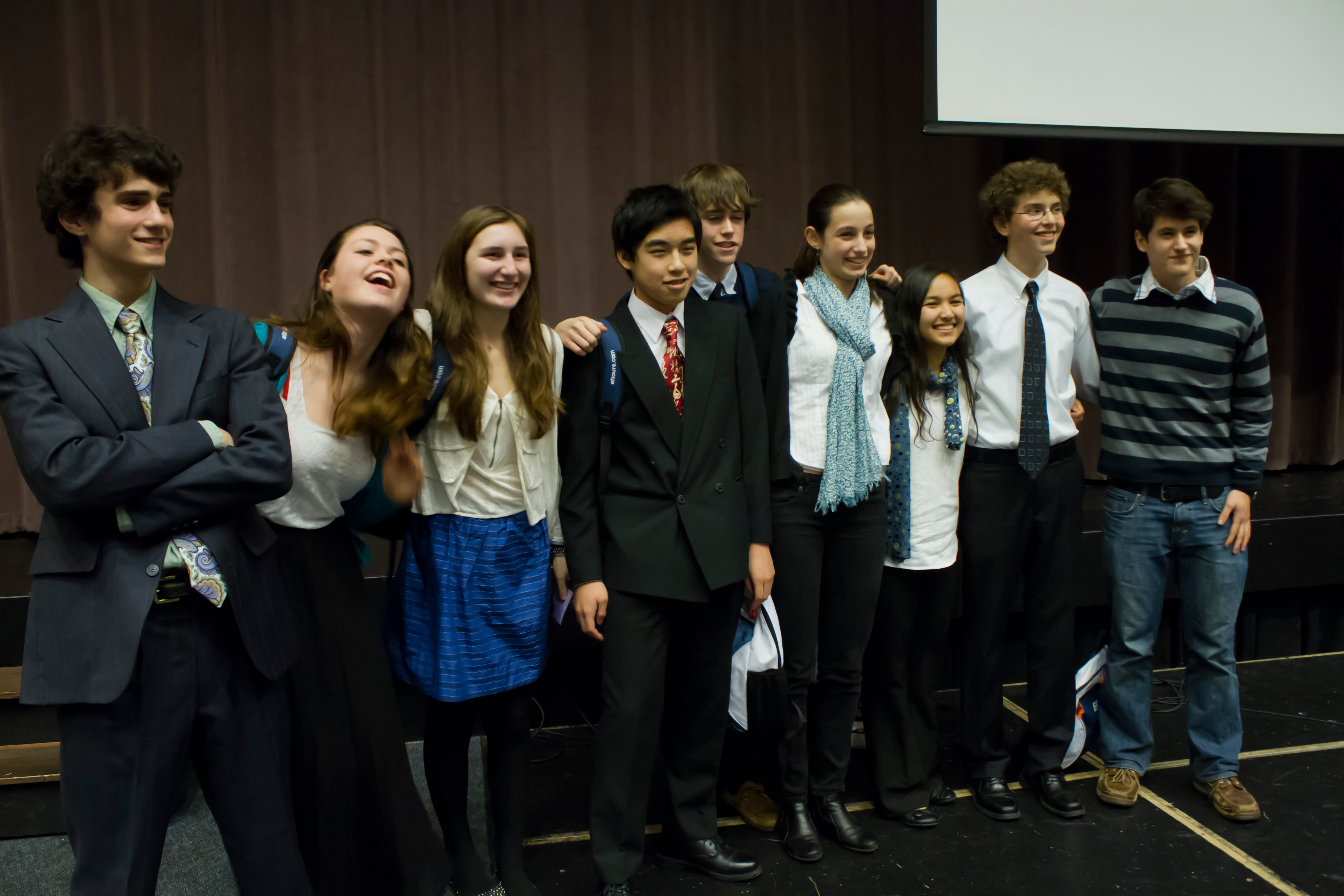 500 students from across the US and Canada are competing in a challenge to find practical solutions to environmental problems in their community. Living on Earth’s Bobby Bascomb went to an awards competition for students in Cambridge, Massachusetts.

CURWOOD: It’s Living on Earth, I'm Steve Curwood.  More than 500 high school students from across North America have taken up the challenge to find practical solutions to ecological problems in their communities.

Participants get to go to the Global Student Leaders Summit in Costa Rica and get to meet Al Gore. Living on Earth’s Bobby Bascomb checked out what's called the "Glocal Competition" at Cambridge Rindge and Latin School in Massachusetts.

BASCOMB: The high energy high school step team entertains an audience of students, teachers, and parents as they take their seats. Two student MCs, Julia Leonardos and Callum Nelson ham it up for the crowd.

LEONARDOS: Callum, did you come up with an environmental issue?

NELSON: Well, yeah my team did, but you gotta keep it a secret, OK?

NELSON: They’re cutting down the rainforest, don’t tell anyone alright?

BASCOMB: Of course, since there are no rainforests in Cambridge, Massachusetts, that project wouldn’t qualify. The challenge for these high schoolers was to identify an environmental problem in their community and find realistic, actionable solutions. The students just had one month to research a problem, find solutions, and present the idea to their teachers, peers, and a panel of judges.

LEONARDOS: Today we’re here to announce the final four finalists who will present to you today, right now, and then we’ll announce the two winners who get a trip to Costa Rica.

NELSON: What? Do we get to go?

LEONARDOS: I don’t think so.

BASCOMB: The students took on a range of environmental issues from wasting electricity to recycling school milk containers. Chris Desnoyers is a member of a team called the Invasive Rangers. They examined the problem of invasive species like purple loosetrife and water chestnuts.

DESNOYERS: So here in Massachusetts the Department of Conservation and Recreation has a $10 million dollar budget for combating these invasive species; however this isn’t enough to eradicate them. They’ve been combating pepperweed, a salt marsh invasive. This has taken 2,000 volunteer hours in the last year just to get it somewhat under control, and a full third of these are spent mapping the plant before they can even try and get out to remove it.

BASCOMB: Their solution is to create an education campaign for citizen scientists to take photos of invasives and tag them using existing map technology. It would free up government scientists to do work that requires more skill or training. 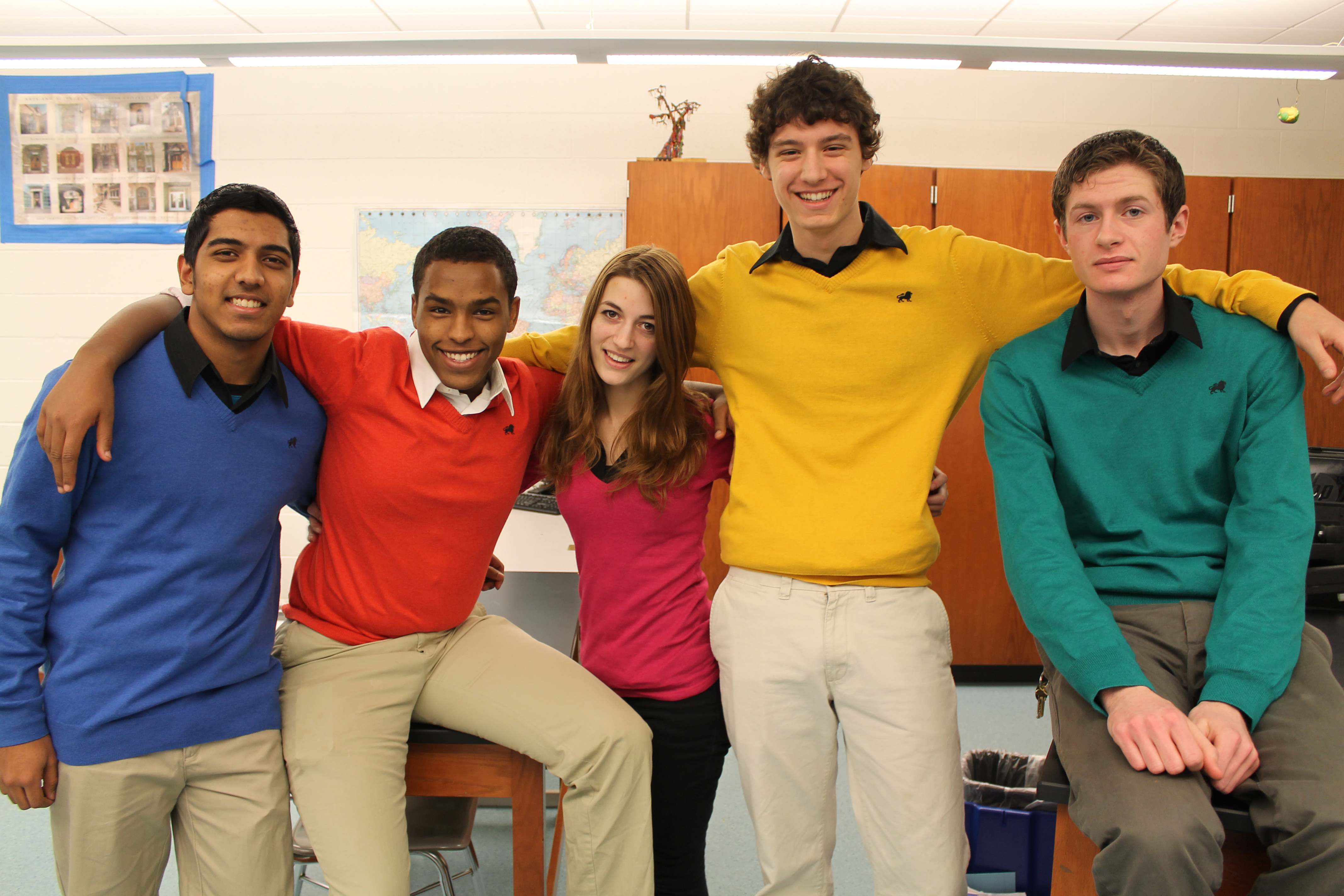 Another student group calls themselves the EPA, Environmental Paper Assault. They’re concerned with how much paper their school uses in a year.

STUDENT: Every day, the CRLS copy center uses about 28,800 sheets of paper. The annual paper usage would stack to 1,867 feet, several hundred feet taller than the Empire State building. In total, we are on track to use 5.6 million sheets of paper this year.

BASCOMB: Instead of paper, they suggest investing in inexpensive laptops so students would no longer need paper hand-outs from teachers. All the teams had to canvass the community to get support for their plans. The Environmental Paper Assault wraps up their pitch with a direct appeal to school officials.

STUDENTS: If not now, then when? If not us, who? If not here at CRLS, then where? Because the world is in our hands. 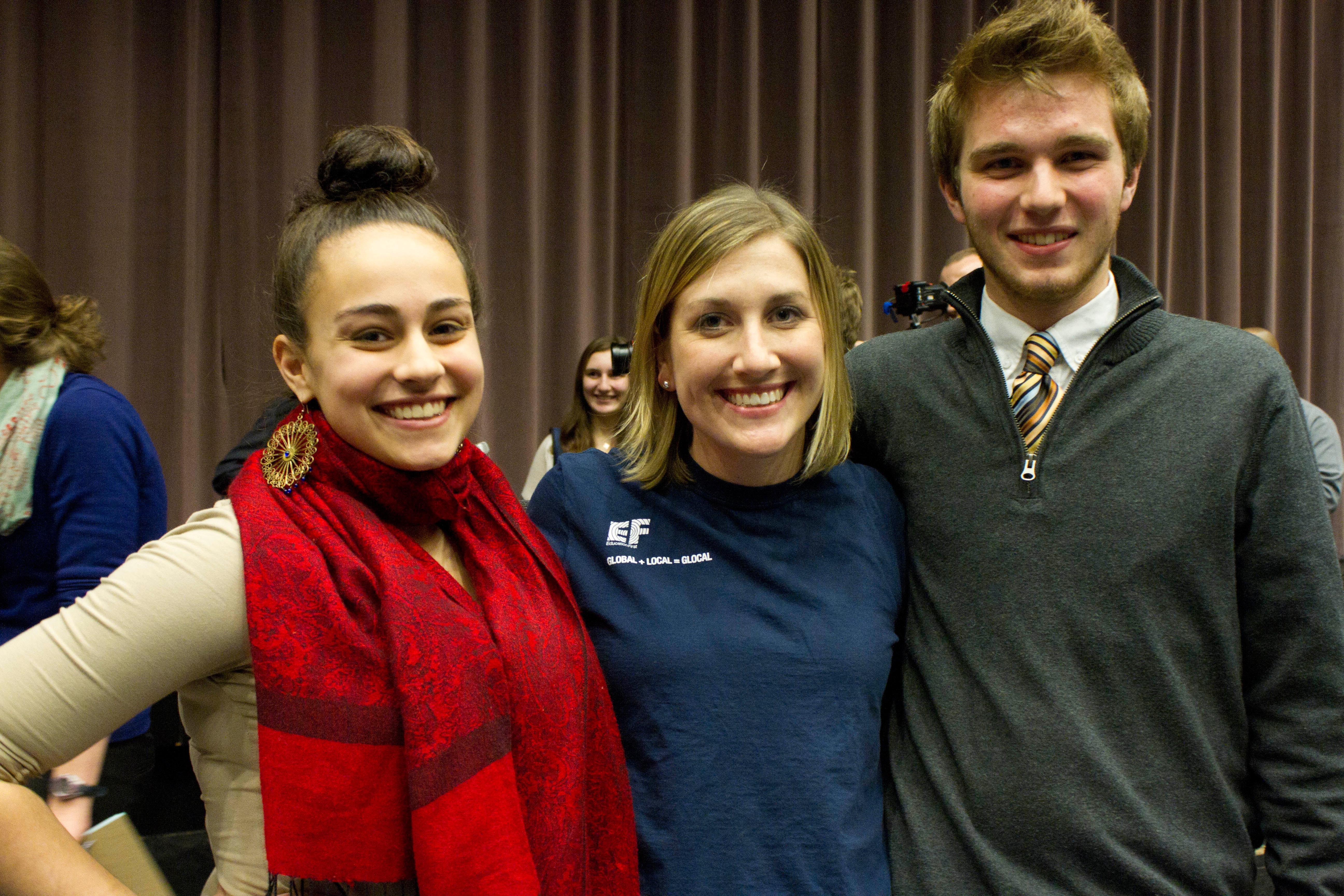 BASCOMB: The school a cappella group performs for the crowd while judges decide on the two winning teams who will get a free trip to Costa Rica.

BASCOMB: Altogether, 500 students from across the US and Canada submitted projects on line. One group, from West Potomac High School in Alexandria, Virginia, is worried about pollution running into the Potomac River. Max Leonard is a senior.

LEONARD: I row crew and from experience I know that the water can get very oily on top. It’s not always safe to swim in all the time, especially if you have cuts because they can be very easily infected. So, I know that this impacts a lot of people around it. So I think it would be nice for us to make the river cleaner.

BASCOMB: Much of the pollution is caused by run-off from parks and golf courses, so the students plan to build buffers to keep it out of the river. Lee Orleans is another member of the team.

ORLEANS: We want to build up a bidi buffer is what we’re calling it, which is our take on a riparian buffer. And we’re going to make them smaller so they fit in our area and we can make more of them and they’re more cost effective than a large buffer but hopefully they’ll have the same effect.

BASCOMB: The “Glocal Challenge” was created by the for-profit organization EF Education First. Their mission is to facilitate student learning through travel abroad. Kate Burseth, the executive vice-president of EF Education First, says she’s surprised by the response she has seen from the students participating in the challenge.

BURSETH: It’s interesting. I thought the draw would be a trip to Costa Rica and I think the draw is very much a chance to have their voices heard and a chance to come up with creative solutions to challenges that they see. And a way for them to have an impact on making the world a better place, and sort of figuring out how they can have a mark on the world they’re inheriting.

BASCOMB: That’s certainly what Cambridge student Andreas Hoffman feels. He’s a member of a team that calls themselves the Swagger Ducks.

HOFFMAN: The environment is the place where we’re going to grow up and live out the rest of our lives. So, it’s important not only for the present, like the baby boom generation, but it’s really important for us because we’re the ones that are going to be inheriting this planet and we need to make sure it’s a nice place to live.

BASCOMB: When the judges at the Cambridge high school finish their deliberations, the MCs announce the winners.

LEONARDOS: Alright so there is one more winner.

LEONARDOS: The second winner of a free trip to Costa Rica is… Environmental Action Club. 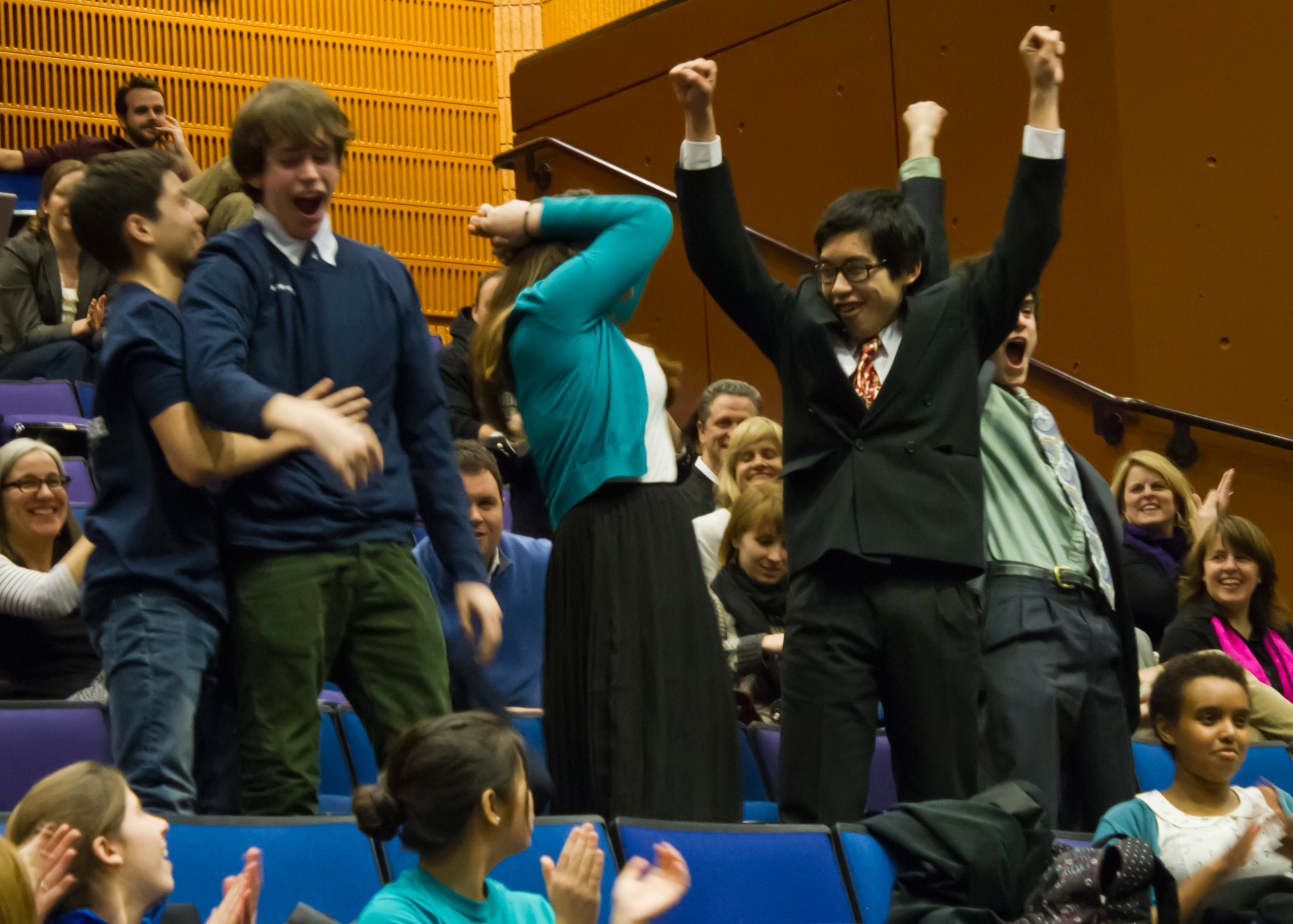 CRLS Students hear their team name announced and know they have a chance to win a free trip to Costa Rica. (photo: EF Education First)

BASCOMB: Aida Muratoglu is a freshman and a member of the second winning team, which is an existing environmental club at the school. They want to work with the city of Cambridge to invest in green roofs and walls to reduce the urban heat island effect.

MURATOGLU: We were actually planning on continuing our project if we won or not. So, I’ve actually been into these environmental issues my whole life really, so, it’s just a next step.

BASCOMB: And around Earth Day all these environmentally active students will get the chance to meet Al Gore, see some wildlife, and soak up some sun in Costa Rica. For Living on Earth, I’m Bobby Bascomb.