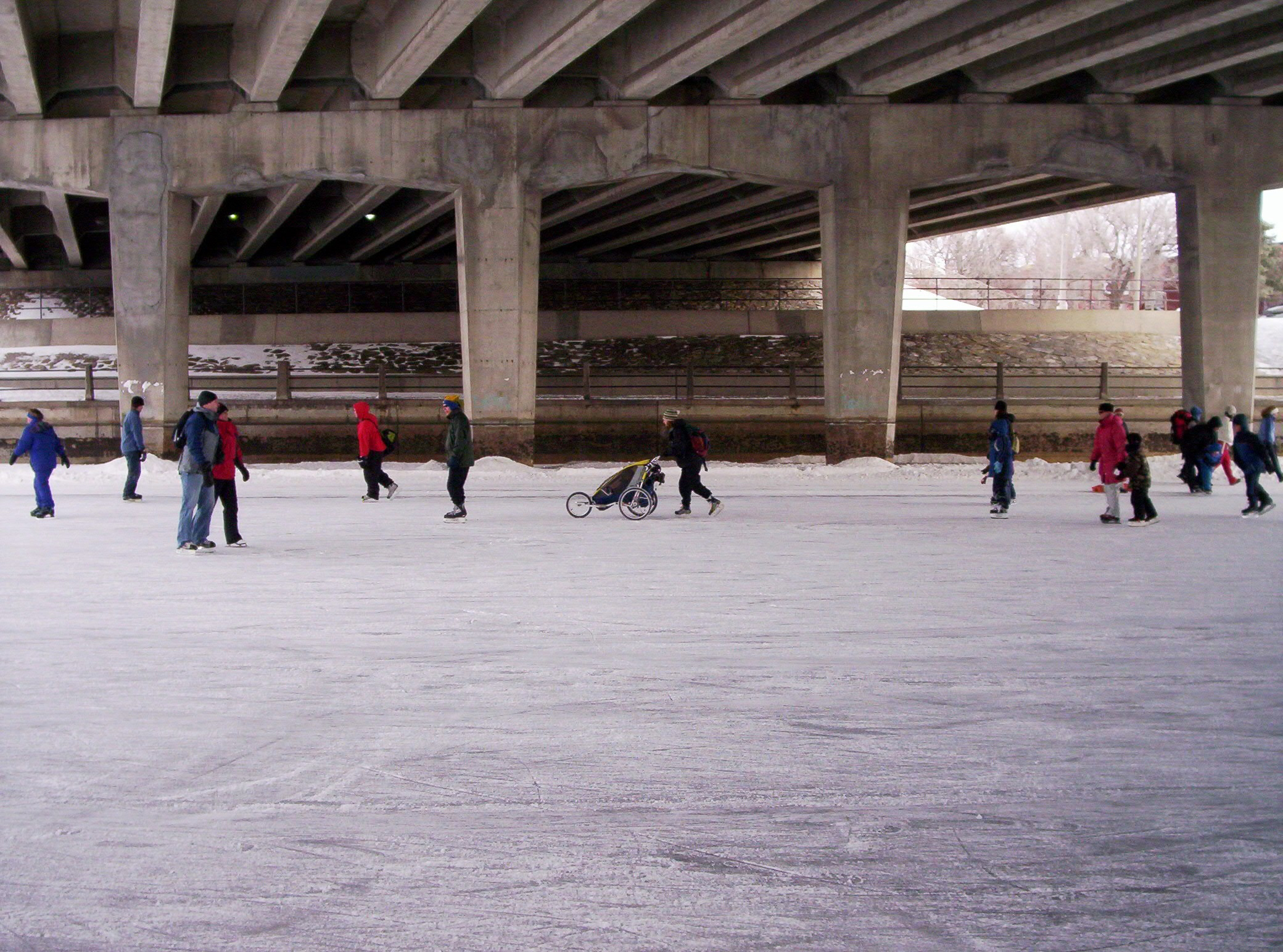 Winterlude Festival on the canal in Ottawa (photo: bigstockphoto.com)

In Ottawa the solution to a long commute is a slick one, don your skates and glide to work. For two and a half months of the year, a canal in the Canadian capital becomes one of the world's largest skating rinks, complete with on-ice cafes that serve up sizzling, hot beaver tails. Bob Carty has our story in this reporter's notebook.

CURWOOD: As we noted earlier in the show, North America is moving into Spring. And the warming weather means the end to a winter ritual up north - skating season on Ottawa's canals. As Bob Carty reports from the capital city of Canada, those canals can even create a healthy, eco-friendly way to get to work.

CARTY: Rush hour in Ottawa on a cold March morning. So cold you have to scrape the frost off the inside of the car windows. So cold your tires have frozen flat on the bottom, and until they warm up you get a bumpy ride, what Canadians call having square tires. And then there's the slippery streets, the snow banks, and the slush.

CARTY: In Ottawa, where winter is a five-month affair, there is at least an alternative to the morning madness of rush hour. Instead of the expressway, you can take the skateway.

MAN 1: Early in the morning, when the sun comes up, and there's hardly anybody on the canal and you can just hear your skates, it's about the only thing you can hear. It's wonderful.

WOMAN 1: I haven't skated for years. I skated when I was a kid, and it's great to be able to skate again, and it's just so much fun skating to work. I just think it's incredible. This frozen Rideau Canal is like a wonder of the world. 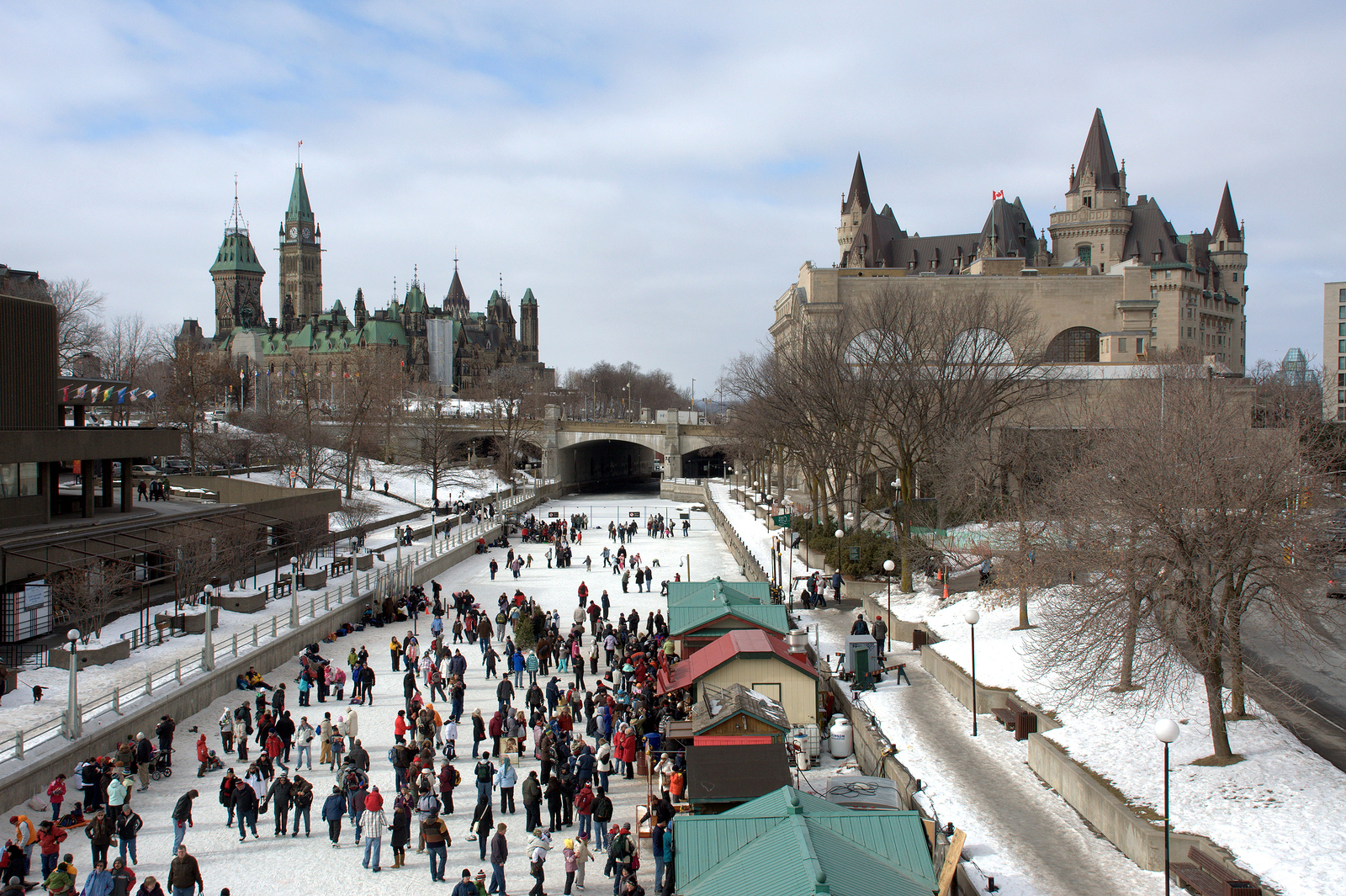 Winterlude Festival on the canal in Ottawa (photo: bigstockphoto.com)

CARTY: For two-and-a-half months, from late December to the usual mid-March thaw, an old canal running through Ottawa becomes the world's largest skating rink. It's 15 yards wide in most places. On one side students head south toward the University. On the other side, some neighbors and I are heading downtown with backpacks and briefcases. It's a three and a half mile commute for me, a 20-minute skate on a good day.

MAN 2: There's a few little bumps, but otherwise it's just really smooth and clear. The best part would be just at the beginning here, when you're sort of on the ice, just between the two walls of the canal.

WOMAN 2: What's interesting for me, being able to look at the sides of the canal, is that my ancestors were Irish stone masons who were brought over to work on the canal. The canal was built by Colonel By in 1832, and it was to give Canadians a route so they could avoid being ambushed by Americans on the St. Lawrence River. It's an amazing engineering feat.

CARTY: And there's another engineering feat just in keeping the skateway in operation every day. It takes 40 full-time employees, and a fleet of snow blowers, plows, and tractor-mounted sweepers, to clean off the snow and the ice shavings. Then, every other night, workers drill holes through the ice to pump up water to flood the surface. It's the equivalent of flooding 125 end-to-end hockey rinks. It takes eight hours. The result is a clean, smooth surface. Almost. You do have to watch out for the occasional rut. And the choice of skates is critical.

WOMAN 3: This took me a long time to get it straight about what kind of skates. I tried the new plastic molded skates that have velcro snaps, and they're supposed to be really quick to put on. But I hated the feel of them. Then I tried the traditional women's fancy skates with the picks. Didn't like them, and so I now am the proud owner of my first pair of men's hockey skates, and they're great.

CARTY: Hockey skates are my choice, too. Though the new fad on the skateway are speed skates, the ones with long 14-inch blades, worn by men and women in spandex outfits who torque by you as you're struggling against the headwind. [GASPS] Did I mention the wind? It can turn a pleasant, just below freezing temperature into a wind chill that feels like 15 degrees below zero. Doesn't seem to bother some skateway commuters, though I have a personal rule of thumb: If your nostril hair freezes in the first minute, maybe it's too cold to skate today, even if you do have the appropriate apparel, such as some or all of the following.

MAN 3: Fairly light shell jacket and a sweater. Shirt and tie. And the trick is not to get too sweaty on the way to work.

WOMAN 5: I, for one, need knee pads. [LAUGHS] As you can see, I got on a really ugly hat that keeps me warm. And you need Kleenex in your pocket.

WOMAN 6: You need to have Kleenex in your pocket for two reasons. One, you need to be able to blow your nose, because it gets cold and then you go into the warmth. The second reason is to wipe off your skate blades when you're finished.

CARTY: After the morning rush hour, the skateway is taken over by others - children and their teachers on a school outing, pairs of mothers, on skates, pushing strollers, reckless teenagers bobbing in between tentative tourists who are trying not to break any bones.

CARTY: Although the skateway costs $300,000 a year to operate, it pays off by attracting almost a million tourists every winter.

WOMAN 7: The amazing thing is, on a beautiful Saturday or Sunday, to see thousands and thousands of people on this canal walking, pushing their kids in these little sleighs. And you see people who are new to Canada, who are valiantly trying to skate and kind of staggering along, and it's great.

CARTY: At the end of the day, the commuters reappear on the skateway, a bit rubbery in the legs. Which sometimes requires a brief stop for rest and refreshment at one of the outdoor eateries on the canal.

CLERK AT COUNTER: How are you? What can I get for you?

CUSTOMER: One orange juice, one hot chocolate, and a famous beaver tail.

CUSTOMER 2: It's really a flat, long dough-like pastry thing, and this one has garlic butter and cheese on it, so it's almost like a mini-pizza. But you can get just plain cinnamon and sugar, and even if you want some jams on top, you can do that, too. 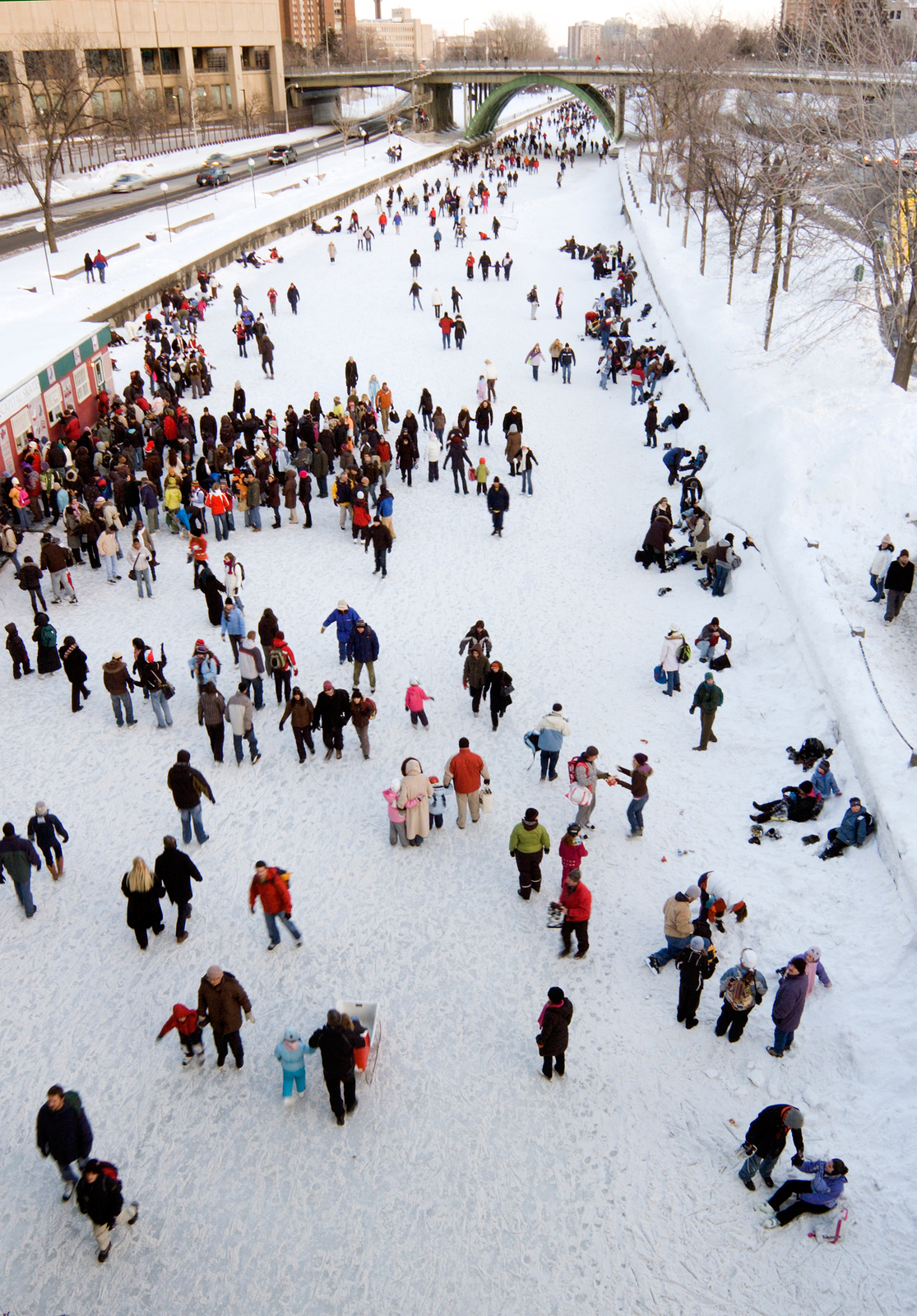 CARTY: Recharged and refreshed, the final mile home is like skating downhill. The wind is gone. The stars are coming out. Skateway commuters can give you sound ecological arguments for doing this: it saves fossil fuels, it reduces pollution, it lessens the risk of climate change. But frankly, the real reason is that it just feels good. As one 7-year-old put it, you don't have to go around in circles. It's fun to skate straight. For Living on Earth, I'm Bob Carty skating straight on the Rideau Canal in Ottawa, Canada.

More about Bob Carty and his music