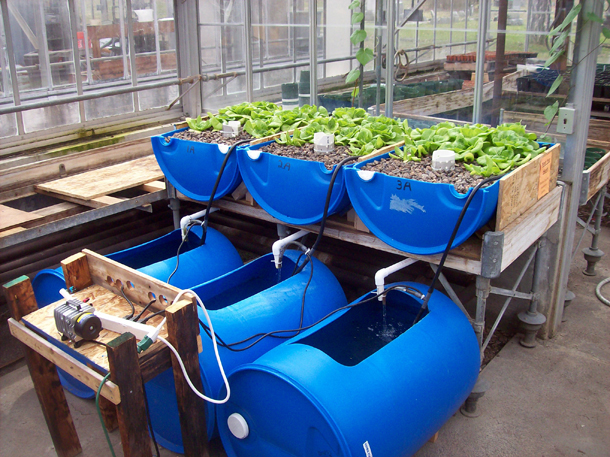 Living on Earth celebrates Earth month in April by taking a look back at a Living on Earth story, then catching up with our sources for an update. This week we hear Bobby Bascomb’s report about using leftovers from a college cafeteria as a source of food for fish grown in an aquaponic system, and hear how the project has developed.

CURWOOD: Here’s an example of how the DC Circuit court of Appeals can operate. Just last year, the court reversed a Federal Energy Regulatory Commission decision regarding that Exxon Pegasus pipeline that just ruptured in Arkansas. Since the pipeline is the only one to carry tar sands crude to refineries on the Gulf coast, the Commission ruled that the Exxon pipeline should be regulated to keep it from overcharging. The three judge panel of the appeals court assigned to the case - all Republicans, including a former staff secretary to President George W. Bush - disagreed and ruled that Exxon could charge whatever the market would bear.

CURWOOD:
When fair April with his showers sweet,
Has pierced the drought of March to the root's feet
And bathed each vein in liquid of such power,
Its strength creates the newly springing flower….

Well, you can tell some of the Living on Earth staff studied English Literature, and, appropriately enough for poetry month in April, they like to pull out their Chaucer. And to also mark the Earth month of April, we have made it a feature of our programs to go on a pilgrimage into our archives, and bring some of our stories up to date.

Today, we update a story Living on Earth's Bobby Bascomb reported a couple of years ago. It featured Michael Amadori, then a student at the State University of New York's College of Environmental Science and Forestry in Syracuse. For his thesis project, he was collecting leftovers from the school's cafeteria to turn into food for fish farming, and he took Bobby along with him.

AMADORI: This corn and bean salsa, that’s like gold right there. If I get some of that I’ll put all that in the food. The corn, beans.

BASCOMB: All the food he collects…. accept dairy… goes into a grinder to make a mush the consistency of playdough. Then he squeezes it through an extruder to make spaghetti shaped strands that are baked, dried, and broken into bite sized fish pellets.

BASCOMB: Amadori leads the way across campus to a small greenhouse where his thesis experiment is growing and eating.

AMADORI: In each fish tank there’s 50 gallons of water and 19 tilapia fish.

BASCOMB: There are 6 tanks in all and above each one is a 50 gallon drum cut in half and filled with gravel. That’s where Amadori cultivates the other half of his experiment.

AMADORI: Aquaponics is the combination of aquaculture and hydroponics. You raise fish in your standard fish tank like many people have at home. But instead of using those commercial filters to clean the water you pump the water up into a hydroponic grow bed which cleans the water just like the commercial filters but you also get value added produce out of it. 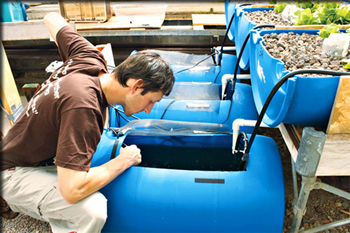 BASCOMB: The fish deposit their waste in the water. That waste acts as fertilizer for Bibb lettuce plants, and the water filters through the gravel to drip back to the fish.

BASCOMB: Tilapia are omnivorous. Amadori feeds the cafeteria diet to the fish in three tanks. Fish in the other three tanks get the industry standard corn-based fish food. 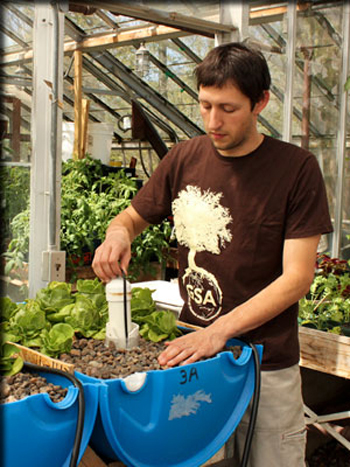 AMADORI: I like to say that there are three main ingredients, ground corn, ground fish and ground up Flintstone vitamins. So, it’s a vitamin and mineral pre-mix and just a corn based feed and a lot of fish.

BASCOMB: It’s all that fish in aquaculture feed that worries Amadori. He says it’s not sustainable.

AMADORI: We’ve pretty much outfished all of the main commercial fish in the ocean so what we’re doing now is harvesting their food. The smaller based fish that is feed for the haddock, feed for the tuna, feed for the salmon. We’re taking their feed and grinding it up just so we can grow fish in an aquaculture setting so it’s not the most sustainable practice.

BASCOMB: Sustainable or not, fish love it. Amadori takes out a plastic container of food…

[PELLETS SHAKING IN BOX UNDER TRACK]

BASCOMB: And shakes some into the tanks. The fish immediately come to the surface and gobble it up.

AMADORI: The commercial food has been catered for decades to be exactly what the fish want to eat. It’s like they get to eat their favorite cereal every day.

CURWOOD: Well, Michael Amadori has now finished his thesis project and graduated, so we checked in with him to see how it finally worked out.

CURWOOD: It was like feeding them porridge instead of Fruit Loops, huh?

AMADORI: [LAUGHS] Yes, I guess it might have been a little bland for their taste and not quite what they were hoping for. Because we had a nutritionist analyze both feeds, and it’s not so much that the pellets were deficient in nutrition, it was that the fishes weren’t eating enough to get their nutrition. So it’s more like feeding them porridge instead of a full, five-course meal.

CURWOOD: What kind of ideas do you have on how you can improve on this experiment...get the fish to like your pellets a bit better?

AMADORI: One, was the selection of adding fish oil. If you’ve ever cooked with it, a very small amount is very potent. That would add more flavor, make it more palatable to fish, so the fish pellets might be used in a commercial setting.

CURWOOD: Well, how do you feel about that? Because as soon as you add commercial fish products, you’re getting away from your original idea of reducing stress on the world’s oceans.

AMADORI: Yes, I know. It’s kind of...it’s tough. But at the same time, if I’m able to offer feed that is able to produce fish just as quick as a commercial feed, that uses 80 percent less feed from the world’s oceans, it’s still a win for the world’s oceans. Is it as a big of a win as I wanted? No. Does it help reduce our demand on the wild fish populations? Absolutely.

CURWOOD: What if you sat those tilapia down and had a little chat with them and said, “hey, look, guys...what is it that did go by in the cafeteria stuff that did taste good?” 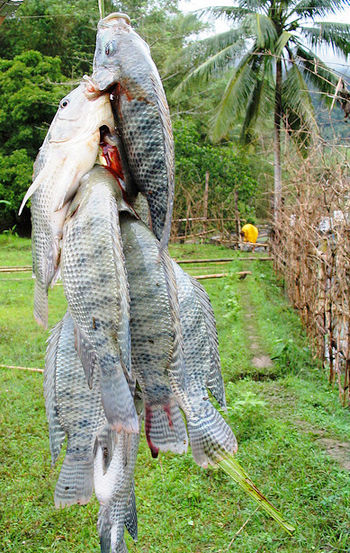 Tilapia fed on cafeteria leftovers are the other half of the experiment. (Photo: Southeast Asian Fisheries Development Center)

AMADORI: Yes, I guess that’s one option...more of a presorting, maybe specifically sorting out the fish based products would be one option to consider. The problem with that is we’re at a university dining hall. There’s maybe not enough seafood being served to produce the pellets on a large scale.

CURWOOD: I was actually thinking of a fish house. What is it...you know the Red Lobster or Jack’s Clamshack. Their compost would have a lot of fish in it.

AMADORI: Yes, that’s actually a great idea. Red Lobsters are all over the country, which would work great. One of the other ideas is the shipping, the transportation...where you’d kind of want it to be local. Every major city probably has at least 20 Red Lobster stores and other types of seafood based Long John Silver’s, things like that. We’d be partnering with them to use their food based on – quote - scraps or leftovers to make the pellets would be definitely an option.

CURWOOD: So how many of the fish you grew did you eat yourself? And how did those fish tacos taste?

AMADORI: [LAUGHS] They tasted just like the other ones. We were able to cut up a couple of them, and fry it up with some lemon and some butter. And you couldn’t taste any difference with either the commercially fed fish or the experimentally fed fish.

CURWOOD: When you were filleting the fish, there wasn’t any more fat or any difference in the fillet, visually, or taste? So how many fish are you growing now?

AMADORI: So, we’re no longer growing fish. The experiment ended in the beginning of 2012, and I defended my thesis in May of 2012 and graduated from college. And before I graduated, I was able to win a student business plan competition on the idea of my thesis - that we were going to take food from an urban setting and use it to produce food in an urban setting. So since I graduated, I ended up founding a company called Full Circle Feed. And we’ve made a slight pivot. When you’re making a feed, it’s regulated very specifically, not only with its fat, fiber, protein and starch, but we’re looking at amino acids, carbohydrates, caloric content, vitamins and minerals - much more highly regulated than say a tree. So instead of producing fish feed, but producing dog treats to start.

CURWOOD: Ah ha. And what does your dog think?

CURWOOD: Yes, I was going to say, this is what every kid who didn’t want to eat those peas lived for. Slide the plate under the table, Rover comes over, and your plate is miraculously clean.

AMADORI: [LAUGHS] It’s funny because someone had sent me an email. It goes, “My wife and I always bicker about me feeding the dog table scraps.” So we’re helping save relationships too!

CURWOOD: Michael Amadori is a graduate now, of the State University of New York College of Environmental Science and Forestry in Syracuse, and founder of Full Circle Feed. Thanks so much, Michael.

AMADORI: Thank you so much for having me. I appreciate it.

URWOOD: And so we thought we'd better do a taste test of his new treats. And he sent a doggie bag to Bobby Bascomb, who tried them out on Byron.

BASCOMB: Can you sit? OK. We have two kinds here. We have a bark, and something that looks like a bone. You want a bone?

BASCOMB: Can you speak? Speak!

BASCOMB: Oh, there you go! 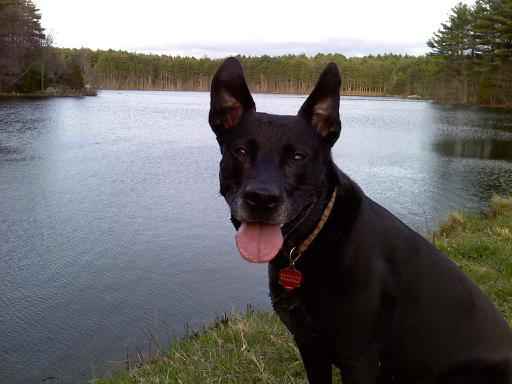 
Listen to the original story