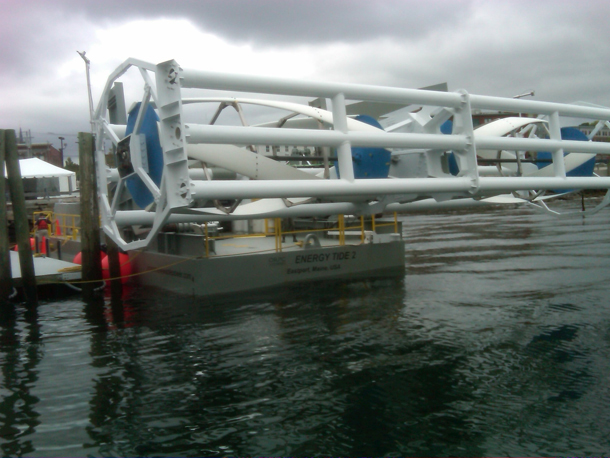 In honor of Earth Month, we are updating some of our favorite stories. This week, Jeff Young reports on the potential of ocean tides to create electricity to power the grid. Then host Steve Curwood learns from Ocean Renewable Power Company founder Chris Sauer how the tidal power experiment is working out.

CURWOOD: In honor of earth month which we celebrate for the whole of April, we're bringing you updates of some of our favorite stories. Back in July of 2011, we looked at harnessing the power of ocean tides to generate electricity. Jeff Young went to Maine to bring us this report.

YOUNG: The barge-like craft moored to a dock in Portland, Maine, looks like some modern version of a sternwheel paddleboat. Hydraulic arms hold a massive cylinder of blades ready to go in the water. But this boat isn’t built for speed, it’s built for power—tidal power. It’s the creation of Chris Sauer and his Ocean Renewable Power Company.

SAUER: This is our baby, this is the Energy Tide 2. This is the largest ocean energy device ever deployed in U.S. waters.

YOUNG: Let’s have a look.

YOUNG: The Energy Tide 2 is normally anchored near Eastport, in an arm of the Bay of Fundy called Cobscook Bay. Sauer towed it to Portland for a national convention on ocean energy. He shows me to the boat’s business end, the high tech composite blades curved inside a turbine generator unit, or TGU.

SAUER: When it’s fully deployed it’s directly under this axle right here. And it’s about 15 feet from the top of the water to top of the TGU, and then it’s locked into position and it just sits there. And as the tidal currents come it starts to generate electricity. And then of course the tide reverses and comes the other way and does same thing. On ac average basis we’re generating about 18 to 20 hours a day.

YOUNG: A small cabin crowded with electronics and monitors converts the power and keeps track of what’s happening underwater. The unit can generate 60 kilowatts of power and that’s been going to a coast guard station, the country’s first federal facility to use tidal power. But primarily, this is a research project. Sauer says in a year of operation it’s shown virtually no impact to fish or other marine life, and it’s proved that the tides can predictably generate power that could be plugged into the grid. Now Sauer wants to scale up.

SAUER: The next step is our turbine generator unit is going to get a little bigger, instead of two turbines it’s going to have four turbines. It’s going to be about twice as long but it’s going to put out three times the power. So instead of a design capacity of 60 kilowatts it will be 180 kilowatts. And we hope to get that in the water and connected to the grid by the end of the year. That’s our plan.

YOUNG: Sauer says the project also proved tidal power can generate jobs. The company has provided jobs for 100 people in Maine, people like Darrell Speed who had been laid off.

SPEED: Honestly I was at the stage where I was going to have to look to go outside of Maine. I was born and raised here, wanted to stay here, but you know it was coming down to that.

YOUNG: That’s when Speed saw an ad for ocean renewable power. He had no idea what it was about.

SPEED: Well quite frankly I didn’t care at the time I needed a job. Like I said, I wanted to stay in Maine. But since I’ve gotten here this company, you know, it’s a company about creating jobs but also a company about creating a sustainable energy resource for the United States. And it’s renewable. The tides go, ebb and flood every day you can set your watch by it. Now will we be 100 percent able to replace all our energy resources? No. But we’re part of the answer. A big part of the answer.

CURWOOD: Well, it's a couple of years later - and that's about when the company hoped it would be feeding tide-generated power to the grid. So we contacted Chris Sauer, the President of Ocean Renewable Power Company again, to find out if he made his deadline of getting plugged in by the end of 2011.

SAUER: Well, we didn't quite make that schedule, but we did get it connected to the grid. In fact, September 5 of 2012 we delivered the first power into the grid from any kind of ocean energy project, whether offshore wind, wave or tidal anywhere in the Americas other than a project in Nova Scotia that involved a dam.

CURWOOD: So a tidal cycle is about 24 hours. How much of that period of time are you able to generate power?

SAUER: We're actually generating on an average basis maybe 16 to 18 of the hours in a day.

CURWOOD: Now, I understand that you've got plans to expand and put more title generators in the Bay of Fundy in Maine. Tell me about that please.

SAUER: We were able to negotiate a long term 20 year power purchase agreement, which means we secured the market at a attractive price for our power to build out the project in Downeast Maine - eventually up to five megawatts which we intend to do over the next four, five years.

CURWOOD: How many units will you have?

CURWOOD: Now, of course the tides are one source. What about tidal rivers?

SAUER: Well, rivers...any kind of moving water...we have a...what's called RivGen power system which is a much smaller version and it's really designed to be installed in remote communities that have what they call microgrids, typically powered by diesel generators and this is a system that we essentially can tow up river that deploys itself. We simply ballast it. Our first project is going in a year from this summer in a little village in Alaska called Igiugig. So that's very exciting.

CURWOOD: And for folks wondering what's novel, of course, no dam required. 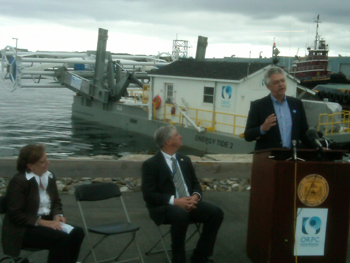 Chris Sauer and his company’s Energy Tide 2, which was developed with some help from the federal government. Sauer hopes the Dept. of Energy will continue its modest support of tidal power. (Photo: Jeff Young)

SAUER: No dam required, and nothing visible from the surface. Everything is below the water so we like to tell people the view before we install the project is exactly the same view you see after.

CURWOOD: Chris, back in 2011 you were concerned about the funding for tidal energy projects. How's that going in, and what's going on in terms of federal backing for your research installation?

SAUER: First of all, the project we have installed now could not have been done without significant involvement of the US Department of Energy. We were able to secure on a competitive basis a $10 million dollar grant for this project, which really allowed us then to raise the private capital. But in general, the mood in Washington, DC, is to defund R&D, particularly for new things like tidal or wave. And so we've been battling that, the amount of money that is made available, for instance, DOE to bid out on a competitive basis is a pittance. It's a few million bucks compared the money made available for other things like nuclear or “clean coal”. It's really miniscule.

CURWOOD: When do you get to break even on this?

SAUER: Assuming the growth scenario where we're able to attract capital, we as a company will be at a break even point in about three years. In terms of cost of electricity, our projections are showing by 2020 or so, we are going to be competitive with virtually any new sources of power. If you look out into that timeframe it looks very good. The issue is how do we get from here to there.

CURWOOD: So give me the back of the envelope calculation as to what the potential for tidal power is in United States? If we were to tap, you know, the obvious and sort of the easier places to do, how much of our power could we get from tidal energy?

SAUER: There's estimates that say it could be ultimately 15 or 20 percent of the total demand for electricity in United States.

CURWOOD: Let me guess there are other countries around the world that are grabbing this technology and running with it? Do I have that right?

SAUER: You're right. In fact, our competition is really for the most part over in Europe. One of the things that's happened there was early on there was significant government involvement in terms of subsidies to get people going. And then some of the European industrial companies people like Siemens and ABB and others have now invested in those European companies that have projects in the water. Although honestly, we've kind of caught up with them, but the problem is now they've gained a significant capital and human resources and this is not happening in the US. We're in a David and Goliath dilemma here because we're going up against the big boys and we're not that big.

CURWOOD: You know, I think I've heard this story before. I think it's called wind energy. I mean we develop the turbines, but the Germans make and sell them now.

SAUER: Yes. We started out in the 70s pioneering and in the end we kind of lost patience and interest. Next thing you know the wind industry comes back in the 90s and it's...most of it is being built by companies from Europe. So I hope this doesn't happen, but it looks like that maybe where this all headed, which is unfortunate.

CURWOOD: Did you ever think when you were a boy playing at the seashore that you would be harnessing all those waves?

SAUER: Well, it's funny. I'm from Illinois, central Illinois, Peoria, Illinois. I didn't even see an ocean until I was in my 20s. So I didn't dream about that because I had a hard time conjuring up what the heck the seashore looked like. But the thing that was compelling at first was almost 70 percent of the world is covered in water. And what I didn't know at the time, is 70 percent of the electricity in the world was within 200 miles of an ocean. And so, if you can somehow put those two things together - excuse the bad pun – but it could be a sea change in how electricity is generated and distributed.

CURWOOD: Perhaps it will play in Peoria.

SAUER: It will play in Peoria.

CURWOOD: Chris Sauer is the President of Ocean Renewable Power Company. Thank you so much, Chris.

SAUER: Thank you. It was a pleasure.


Watch a Video About TidGen

Listen to the Original Story