BirdNote® How Birds Sing So Loud 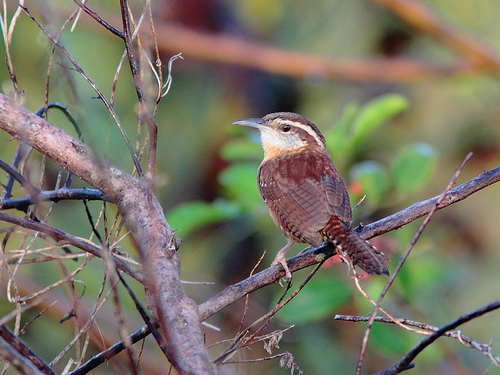 Evolution has given the Carolina Wren one of the most impressive songs in the forest. BIRDNOTE®’s Michael Stein explains how this tiny bird can sing so loud.

CURWOOD: Evolution is a wonderful thing - creating the most weirdly beautiful, ingenious and unlikely creatures. In the beautiful camp there are, of course, many, many birds. But don’t look for showy feathers or glorious colors to distinguish the subject of today's BirdNote®. Here's Michael Stein to explain.

STEIN: When a Carolina Wren tips back its head and sings, something remarkable happens. A Carolina Wren can sing so loudly that you almost have to shout to be heard over its song.

Wrens aren’t the only small birds with big voices, but they are the best known for this ability. How can a bird like a Carolina Wren, all of five-and-a-half inches long and weighing only as much as four nickels, produce so much sound? 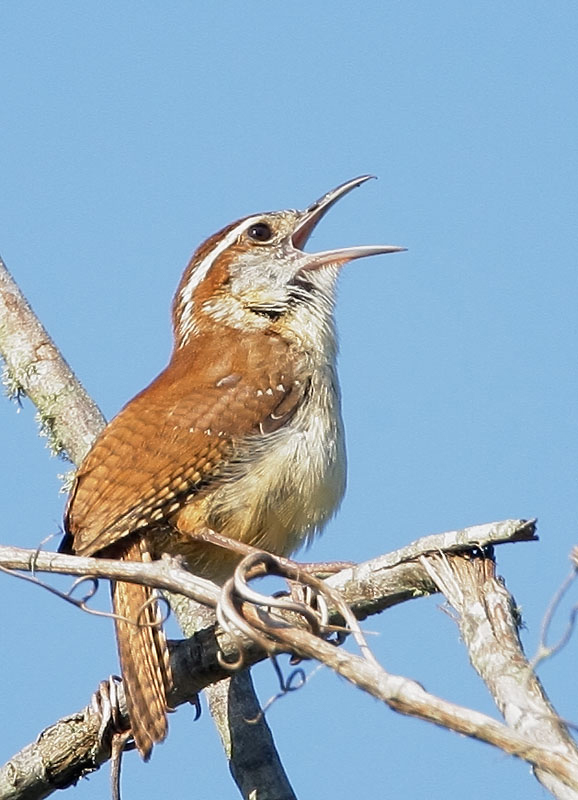 The Carolina Wren has one of the loudest songs out there (photograph: Ken C Schneider)

The answer lies in the songbird’s vocal anatomy. Unlike you and I, who create sound from the larynx way up at the top of our windpipe, a bird’s song comes from deep within its body. Birds produce song in a structure called the syrinx, located at the bottom of the windpipe where the bronchial tubes diverge to the lungs. The syrinx is surrounded by an air sac, and the combination works like a resonating chamber to maintain or amplify sound.

Evolution has given birds a far more elaborate sound mechanism than it’s given humans. Where we wound up with a flute, songbirds got bagpipes.

CURWOOD: To see some photos of those shrill Carolina Wrens singing their hearts out, flit on over to our website LOE.org.

[Bird songs for BirdNote come from The Macaulay Library at the Cornell Lab of Ornithology. Today’s show brought to you by The Bobolink Foundation. For BirdNote, I’m Michael Stein.

BirdNote's theme music was composed and played by Nancy Rumbel and John Kessler.