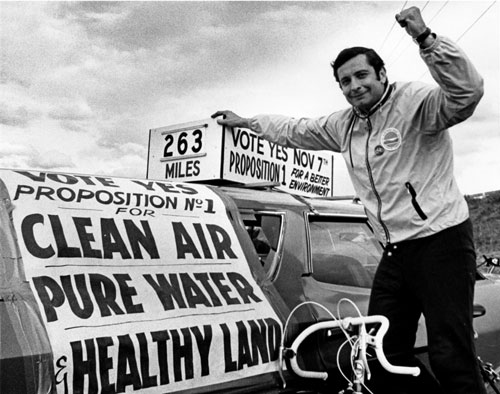 April 22nd 1970 was the very first Earth Day. Denis Hayes, its coordinator, talks with host Steve Curwood about what Earth Day achieved in the early days, and how it might recreate that success today in the face of global challenges like climate change.

CURWOOD: From the Jennifer and Ted Stanley Studios in Boston, this is Living on Earth. I’m Steve Curwood. Earth Day. It began in the style of the Vietnam War protests back in 1970 as a “teach-in” about America’s - and the world’s - badly polluted air and water. And on the CBS Evening News of April 22nd, Walter Cronkite explained its significance.

CRONKITE: Good evening. A unique day in American history is ending. A day set aside for a nationwide outpouring of mankind seeking its own survival. Earth Day. A day dedicated to enlisting all the citizens of a bountiful country in a common cause of saving life from the deadly byproducts of that bounty. The fouled skies, the filthy waters, the littered earth. 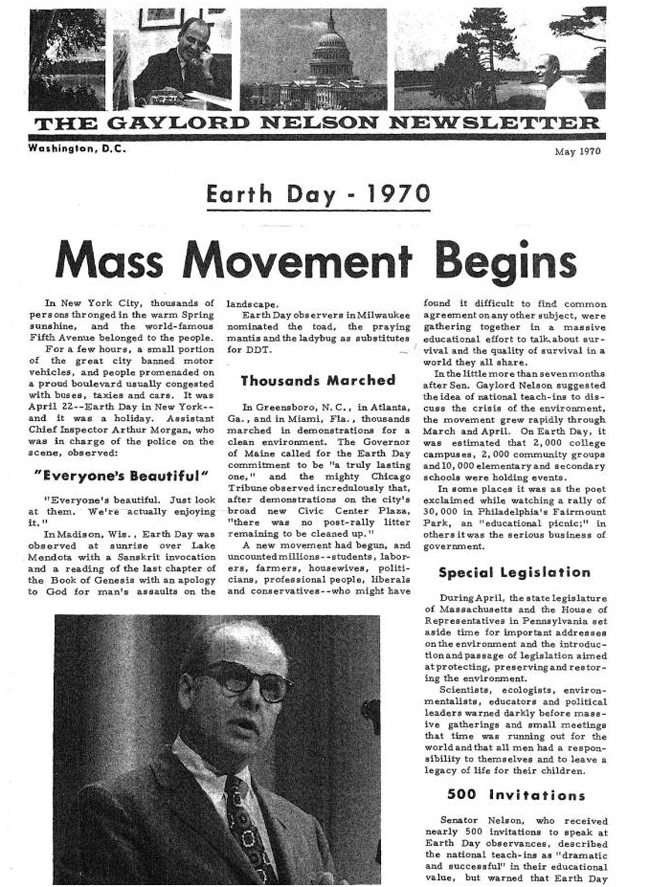 CURWOOD: By some estimates, 1 in 10 Americans participated in that first Earth Day. They were mostly young and white. Some were decorous and serious while others were more whimsical and eccentric. Again, Walter Cronkite.

CRONKITE: The gravity of the message of Earth Day still came through. Act or die.

CURWOOD: Denis Hayes, the coordinator of that first Earth Day, gave a call to action at the first rally in Washington, DC.

HAYES: We are systematically destroying our land, our streams, and our seas. We foul our air, deaden our senses and pollute our bodies. That's what America's become. That's what we have to
challenge.

CURWOOD: Well, 43 years later, Denis Hayes is still going strong - and he joins me now from KUOW in Seattle to assess how Earth Day is standing up to being middle-aged. Welcome to Living on Earth, Denis.

HAYES: Steve, it's always a pleasure to be here.

CURWOOD: So back in 1970, you were worried about air pollution in our environment and our bodies. How did we rise to that challenge? How are we better off today? Or are we worse? the same?

HAYES: Well, we're both. We did a wonderful job with the things that are visible. And there was this period between 1970 and 1974 where we passed the Clean Air Act, the Clean Water Act, Safe Drinking Water Act, Marine Mammal Protection Act, Endangered Species Act, Environmental Education Act and on and on. And where President Nixon felt political pressure, that he succumbed to, to set up the Environmental Protection Agency through an executive order. And all of that stuff took care of those clouds of smoke that were pouring out of our smoke stacks and the really ugly crud that was fouling our rivers. And now we are wrestling with a whole bunch of things that are much more nuanced and sophisticated, many of them things that you can't smell or taste - most of them things that you can't see. But they're every bit as dangerous and now we need to rise to this new set of challenges.

CURWOOD: As I understand it, Earth Day is the world's most widely observed secular holiday with 170 or more countries celebrating. Please give me some examples of how people celebrate Earth Day around the world.

HAYES: It's all over the place. We've had collections of more than 20,000 saffron-robed monks from Southeast Asia coming together for a massive celebration of the Earth in Thailand. We've had things in the most remote villages where Peace Corps volunteers have taken photographs of these things where they're working on environmental projects – sanitation projects and things.

CURWOOD: So, Denis, what is the focus of Earth Day today? In America, one thinks people are planting trees and picking up litter or...do you see Earth Day now as a force to take on the concerns of today such as climate change? 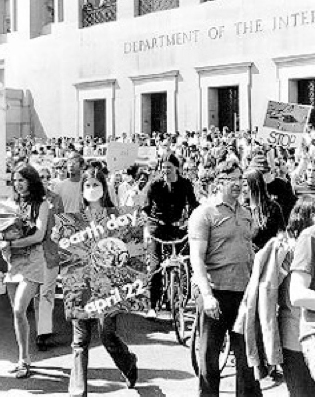 HAYES: What the power of Earth Day historically has been on those occasions when it really did have some enduring impacts – the most impressive of them I think being 1970 and 1990 – was to articulate a pretty strong set of values, but almost no restrictions upon how people chose to address this. So in the first one we had folks who were pounding apart automobiles with sledgehammers to protest air pollution from automobiles. We had people who were donning gas masks and marching down Fifth Avenue. In 1990, where the theme was in essence, who says you can't save the world, individual behavior is important. You can protest the Exxon Valdez, but Americans who dump their used motor oil down the storm sewer are dumping more than 12 Exxon Valdezes into our most vulnerable waterways every year. Whenever we've tried to do something that is more narrowly tailored, it has diminished in size spectacularly. So I think that its power in the future is going to be one of, once again, creating this framework and then encouraging vast amounts of creativity out in the hinterland as people chose to do what they wish.

CURWOOD: What was the inspiration that led you to become a national coordinator of the first Earth Day?

HAYES: I graduated from Stanford, went off to Harvard, and saw this piece in the New York Times about Senator Gaylord Nelson advocating the creation of a national environmental teach-in. I thought that I might be able to persuade him to let me organize Harvard, or conceivably even Cambridge, or maybe even Boston.

So I, with the arrogance of youth, flew down to Washington, DC and got a 15 minute meeting set up with the senator – and it turned into about a three hour meeting as we discussed what one might do to pull together this event. And I went back with a charter to organize Massachusetts. And two days later, I got a phone call asking me if I'd drop out of college and come and organize the United States. For people at Harvard University, it probably seems like it's not a big step to move from Harvard University to the United States. But for me, it was truly a life-changing experience.

CURWOOD: Later in the show, we're going to walk around with you at the Bullitt Center. That's the building your organization, the Bullitt Foundation, touts as the greenest building in the world today. Can you tell me, what does it look like? What would I know from the outside looking at it that it's a special building?

HAYES: From the outside, probably the dominant characteristics are a huge solar array that sticks out on all sides like a mortar board at a graduation ceremony. Remember, this is a building that in Seattle, where there isn't a lot of sunlight, generates as much energy over the course of the year from sunbeams hitting its roof as it uses. And the second really dominant characteristic are super efficient, very large, self-operable windows that are four feet by ten feet, weigh 700 pounds a piece and provide an internal atmosphere that encourages productivity, general happiness, much greater health, and makes our tenants people who want to remain in the building.

CURWOOD: Well, we'll be back to tell more about your building later in the program. Denis Hayes is President of the Bullitt Foundation, and was national coordinator of the first Earth Day, and is chair of the Earth Day Network. Thank you so much, Denis.

HAYES: A pleasure as always, Steve.