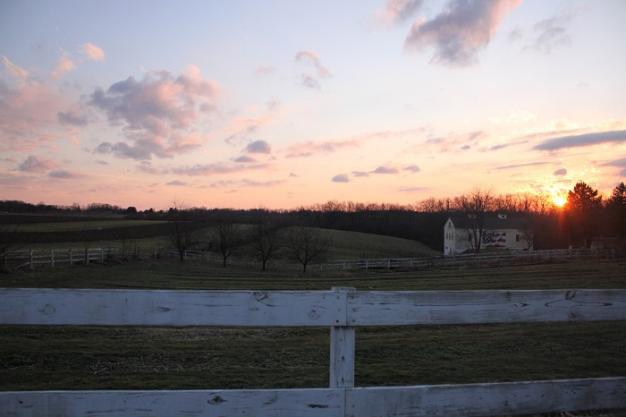 Supporters of natural gas say it can serve as a bridge fuel to help us transition from dirty energy sources like coal to renewable power. Now some Pennsylvania farmers who allowed gas companies to drill on their land are using the lease payments to purchase solar panels.

CURWOOD: Supporters of hydraulic fracturing - or fracking - say the increasing availability of natural gas gives the US a way to replace coal and oil and provides a bridge fuel to renewable energy sources, and a cleaner energy future. In Marcellus shale country, some farmers with gas leases are using this bridge fuel to get right into solar. From the Allegheny Front, Margaret Krauss has the story.

KRAUSS: Dwayne Bauknight drives me onto his Washington County property in a golf cart. He pulls a U-turn to park between two rows of 15-foot tall solar panels and shows me how they work.

BAUKNIGHT: When it’s producing it’ll go through all those inverters, all those yellow things,
and then come out of that straight meter right there. 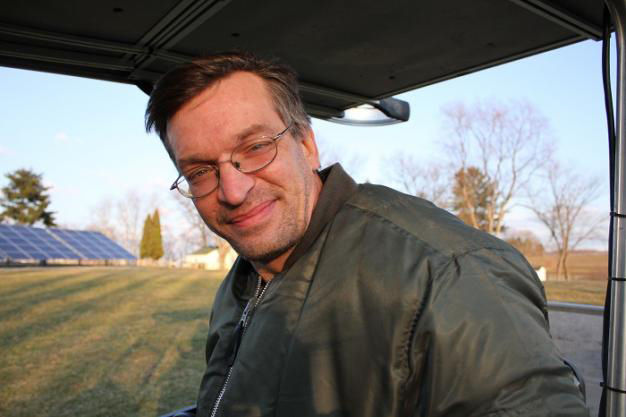 Dwayne Bauknight says he installed solar arrays on his farm to do something good for the environment. (Photo: Margaret J. Krauss)

KRAUSS: Bauknight and his family signed a gas lease with Range Resources in October and used the money to install a 38.4 kilowatt solar array on their farm, Shared Acres. Seven years ago Bauknight decided to leave a job as a financial advisor and become a farmer. He says his two careers aren’t so different - now he grows food instead of money. He does a lot of the same kind of decision-making, he said, using the same math, analyzing risk. Bauknight is conflicted about drilling for environmental reasons. But for his family’s sake, weighing the risks, he couldn’t not take the money. So if he was going to lease, he figured he could use the gas money to do something good for the environment.

KRAUSS: In looking to the future, Bauknight had a new risk to factor in. The golf cart helps Bauknight get around the property because he’s still having trouble walking. Last summer, while trying to remove a tree from the property with a backhoe, it fell - on him, leaving him with a plate and eight screws in his lower back. Driving back toward his house in the golf cart, I asked Bauknight what he thinks about when he looks out at the solar panels.

KRAUSS: Just two miles down the road is another Duane. Duane Miller’s family has been farming this land for five generations. Miller has no qualms about drilling for shale gas. He sees it as a boon for farmers like him who were just getting by.

MILLER: If someone offered to give you a bunch of money, what would it mean to you? [LAUGHS] I got out of debt. I hadn’t been out of debt since I was 18 when I started farming, when I took over from my dad. 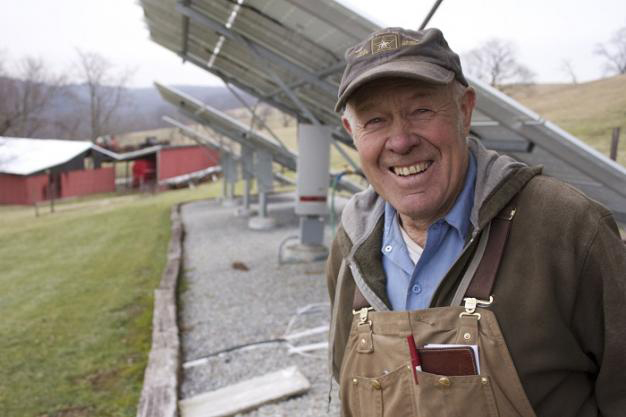 Duane Miller in front of the solar array he installed to reduce and stabilize his energy bills. (Photo: Margaret J. Krauss)

KRAUSS: Miller’s no environmentalist. He installed solar panels so he’d be free of energy bills. It also let him quit milking cows and raise beef cattle instead. It’s a lot less work, and he can still afford to farm. What farmers like these two Duanes choose to do with their gas money has been a question for Tim Kelsey, an agricultural economist at Penn State University. He’s not surprised some are taking gas money and investing it in solar.

KELSEY: The nature of farming involves kind of long-term investments.

KRAUSS: The state doesn’t keep track of how many farmers have used gas money to buy solar panels. But Joe Morinville, who owns Energy Independent Solutions, a solar company near Pittsburgh, has done some research of his own. He estimates that 25 percent of his customers are farmers and that of those number, many have turned to solar thanks to gas.

KRAUSS: Solar arrays can come with a six-figure price tag. So while investing in solar might be out of reach for a typical farmer, shale money makes it possible. Back to Dwayne and Duane. Duane Miller says solar panels are a lot like a gas well. Both are domestic energy sources right there on his land.

MILLER: There’s an awful lot of energy that we’re not using in this country that’s here. It’s just a matter of harnessing it, getting the technology to use it. It’s not free energy, but it comes close.

KRAUSS: Dwayne Bauknight isn’t sure he’d sign another lease. He thinks we’re effectively roasting the planet with our use of fossil fuels like natural gas, and that drilling has to stop. So for now, he contents himself with building the bridge between fossil fuels and renewable energies, doing what he thinks is best.

BAUKNIGHT: Everybody's got to make up their own private decision. It’s between you and your farm.

CURWOOD: Margaret’s story comes to us from the Pennsylvania radio program, The Allegheny Front.


Check out the Allegheny Front, an environmental radio program based out of Pennsylvania