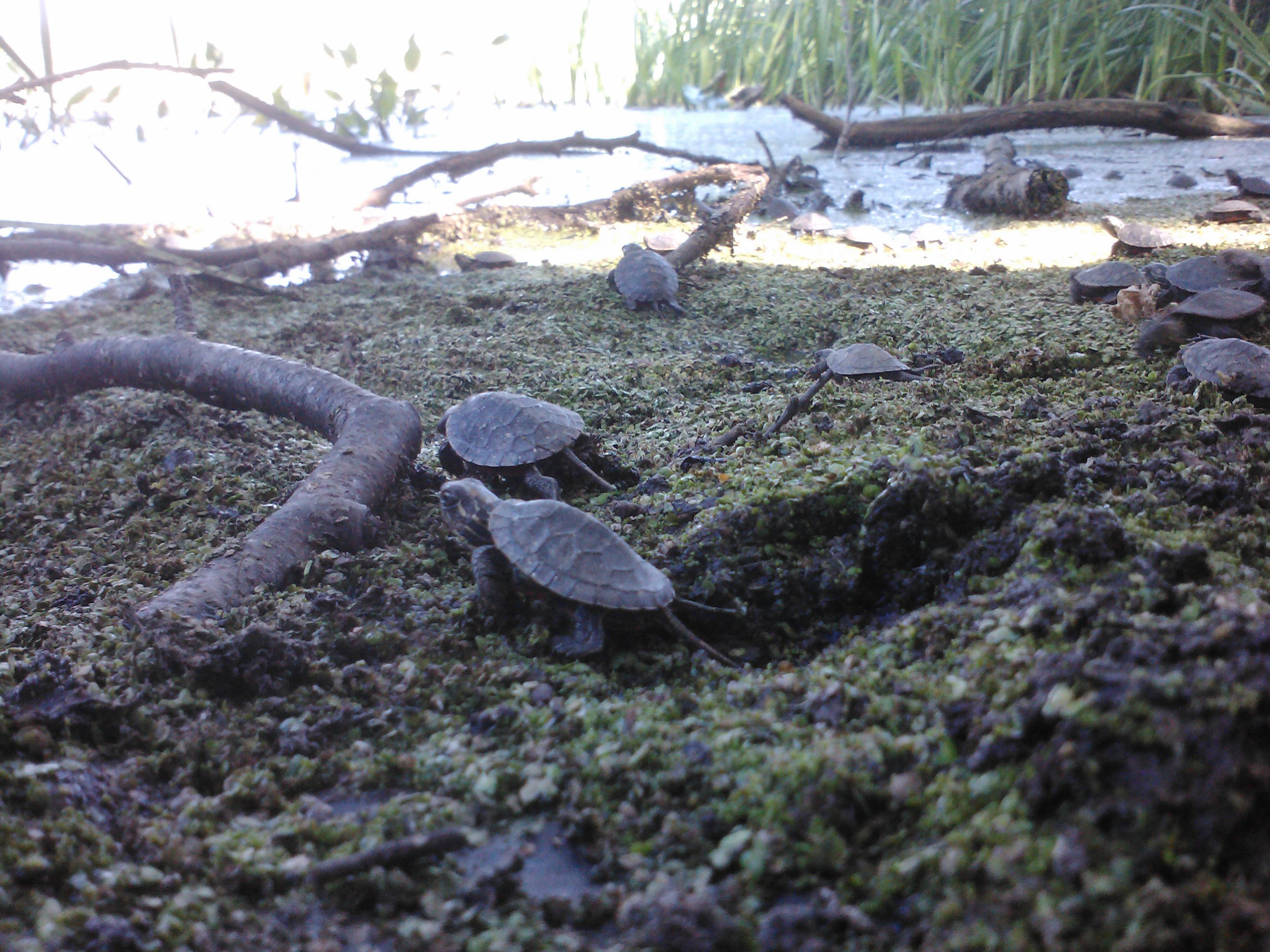 CURWOOD: Now, climate disruption affects different species in a variety of ways. And scientists at the Iowa State University have discovered that Painted turtles may be facing one of strangest threats of all; in places the population is at risk of becoming all female. Rory Telemeco is a biologist at Iowa State University. He says it has to do with how the sex of turtles is determined. 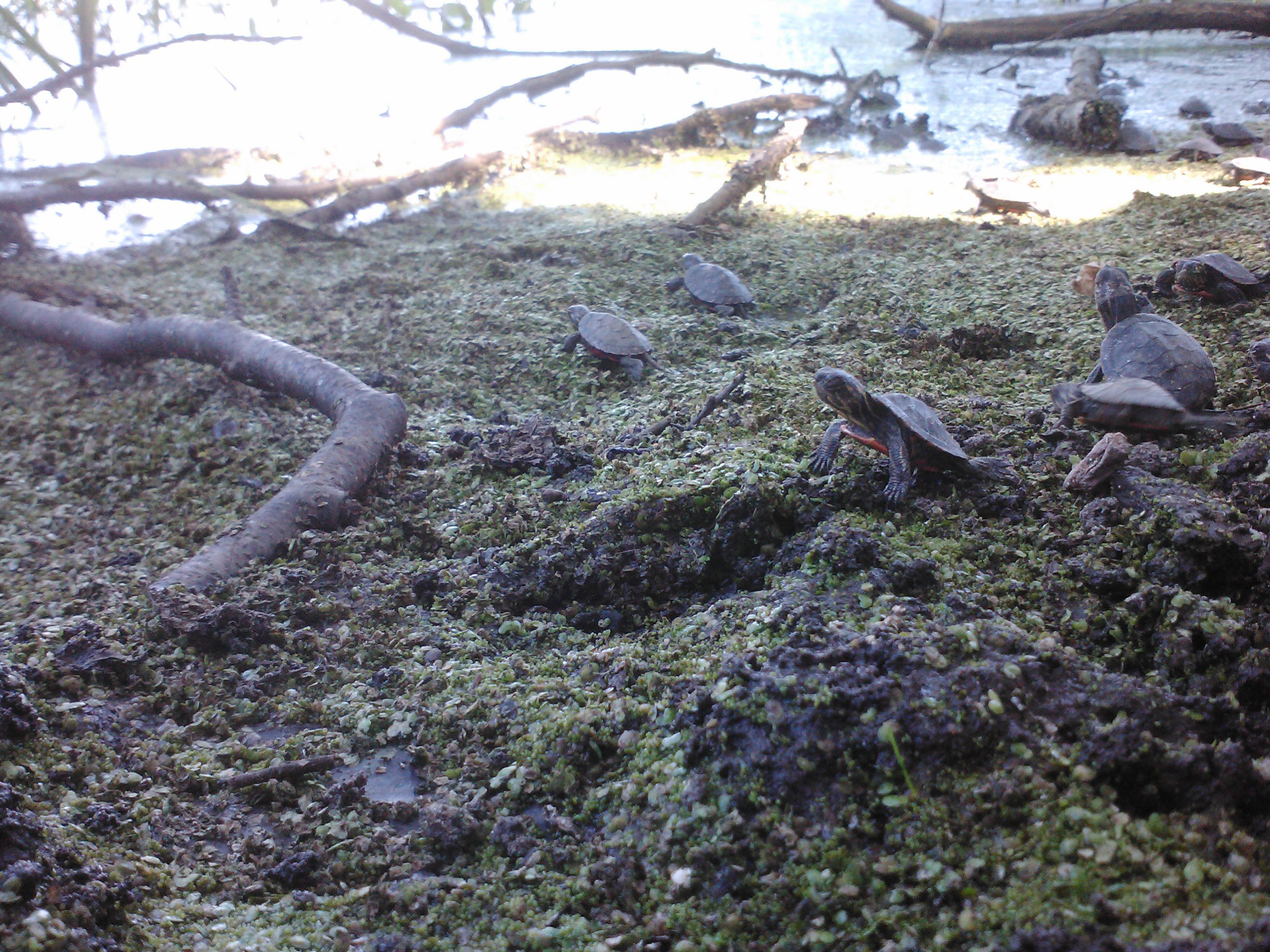 TELEMECO: Painted turtles, along with many other reptiles, and some fishes and a few other things, have a different form of sex determination than what we generally think of in mammals. Mammals have their genotypes, their chromosomes determine whether they are male or female. We have XYs produce males, XX produces females. However in many of these reptiles, such as these turtles, the temperature during development, during a fairly short window of about a month, during the middle third of development, determines whether or not the offspring will be male or female. Cool nests producing males and warm nests producing females.

CURWOOD: So what you’re saying is that warmer temperatures produce more females.

TELEMECO: Potentially, though there are a number of ways that turtles could potentially buffer themselves from changing climate. We know these turtles have been around for a very long time. As a group, turtles have been on earth for 200 million years. The earth's changed a lot over that period. So they have some potential to respond to environmental changes. The question is, what avenues might work, and what avenues might not.

CURWOOD: So what did you do to determine the impact that climate change could have on the Painted turtles sex ratio?

TELEMECO: Well, the primary thing we were trying to get at was we wanted to know, will nesting earlier in the year be a mechanism that could buffer these populations from climate change? We know that shifts in the onset of reproductive events, really any major event in the life of an animal - these are called phenological changes - are changing really really rapidly. That's what we typically see when we go out to try to measure how is climate change affecting organisms. We see flowers blooming earlier. We see leaves bursting earlier on trees. Birds and butterflies are migrating earlier. Frogs are singing earlier, and things like turtles and lizards are nesting earlier in the year. It’s a really common response. And this leads to the question, are these organisms buffering themselves from climate change by nesting and doing their things earlier in the year when it’s a little cooler. We really wanted to know whether or not that was going to work. And so, we looked at these turtles, we have 25 years of research on a single population of Painted turtles in the Mississippi River. We took all that information. We put it into a mathematical model, and what we actually found is that nesting earlier in the year by itself does very little good. If it’s the only thing that the turtles have at their disposal, have you, to sort of protect themselves from climate change. It would only buffer them to about a degree increase in temperature. Any more than that, it would have no buffering effect. We’d expect to see complete 100 percent female sex ratios in these populations, and potentially even really high mortality in the nests of these populations as well. 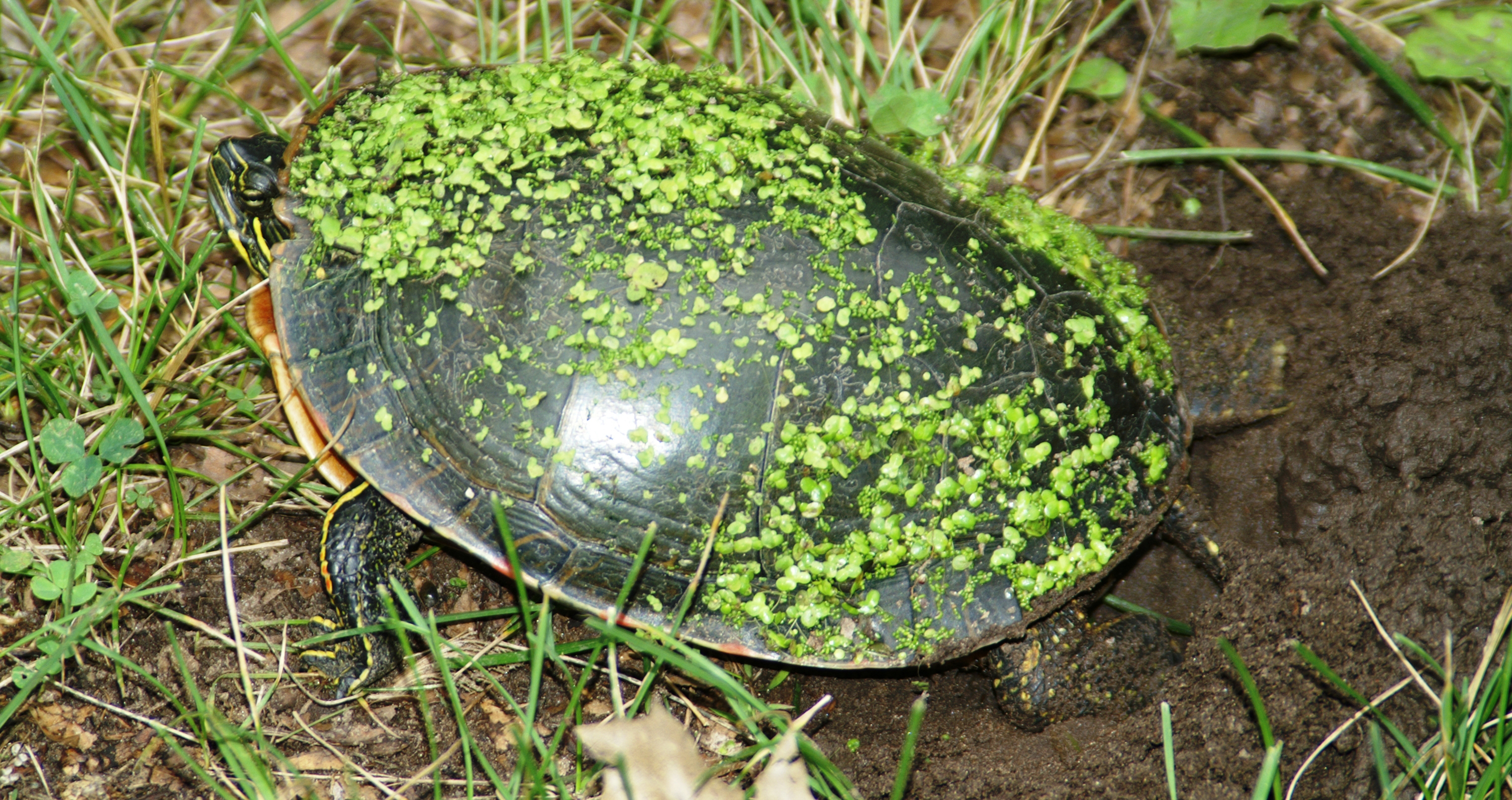 CURWOOD: So you’re talking about one degree Centigrade?

TELEMECO: Yes. We’re actually expecting four or more degrees Centigrade in the midwest over the next century. This mechanism by itself really seems like it’s going to be ineffective.

TELEMECO: Well, if you think about how temperature changes over the course of a year - it gets warmer in the spring and then levels off in the summer and gets cooler in the fall. You can think of a week in spring, temperature changes pretty rapidly, from Monday to Friday, you might have a big difference in temperature. In mid-July, from Monday to Friday, it might be pretty much exactly the same, it’s much more stable in mid-summer. So if say a female turtle, lays her eggs in the ground, at say, June 1st is the historic nesting date for our Painted turtles, she really wants that temperature to be predicting temperature throughout the nest, especially when the eggs are actually sensitive to temperature as far as determining their sex, and that generally is the middle third of development. For our turtles historically, that would be July. If they advance their nesting date, so say they’re advancing a week or two - now they’re nesting in mid-May. The nest’s temperatures are warming a lot more rapidly. While they might plant the eggs in the nest at the exact same temperature, on June 1 and May 15, because of climate change, the actual temperature the eggs experience by that middle-third of development, which is now mid-to-late June, is actually quite a bit higher than they historically were in July. What it basically means is that the females might be nesting at the exact same temperature year after year while nesting earlier, but because of this more rapid increase in temperature early spring, later in the development, the nests are actually warmer than they were before climate change, even with these barely massive shifts in female nesting behavior.

CURWOOD: Because no one has told the turtles that, “by the way, maybe your eggs are going to be a lot hotter in the middle of July, so maybe you ought to lay them even earlier.”

CURWOOD: What about evolution? Turtles have been around for over 200 million years surely there must be a way they can adapt. 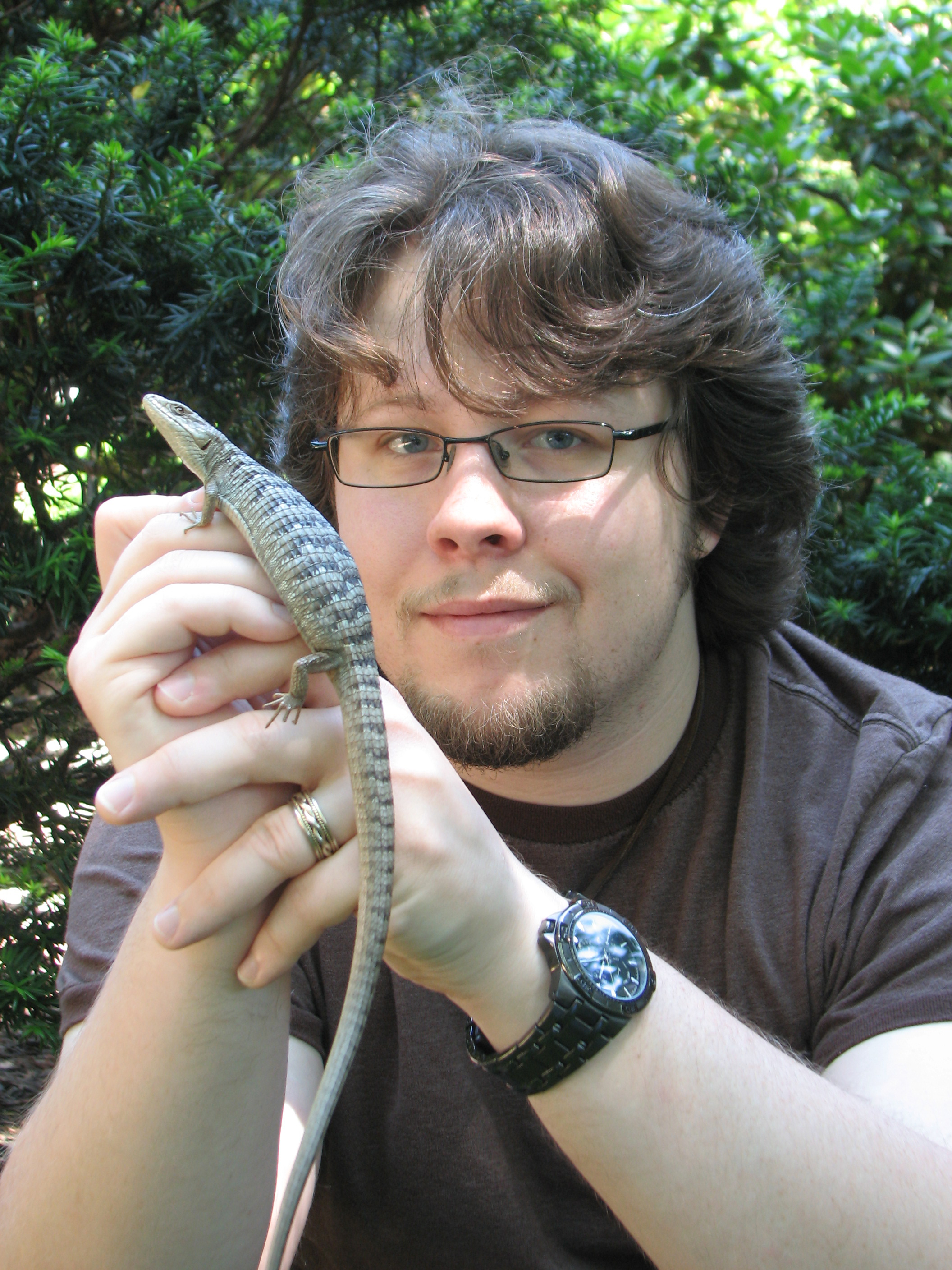 TELEMECO: There are many ways turtles can evolve and adapt to a changing environment. The challenge is going to be that climate change is occurring so very rapidly. We’re expecting changes of four to eight degrees C within 100 years. And these turtles are fairly long lived. It takes them five years to be reproductive, and they can continue to survive and be reproducing every year, for another 20 to 25 years, and that rate of generation time really slows the ability of populations to evolve. It means that you would need dramatic evolutionary changes within just a few generations for them to be able to cope with the types of environmental change we’re predicting over the next century.

CURWOOD: Rory, what if anything, can we do to prevent this?

TELEMECO: Ideally, we would cut back emissions, and do all the things that numerous political activist groups have defined. We’re not going to be able to completely stop climate change, but pull it back and keep the climate from changing so much. Short of that, the things we can do to help support these organisms, or to keep them from going extinct at least, are the same things we would do under any other circumstances. But it’s going to be really difficult and sadly, I really don’t think we’re going to be able to save all of them.

CURWOOD: Rory Telemeco is a biologist at Iowa State University. Thanks for taking the time.

TELEMECO: Thank you very much for having me.