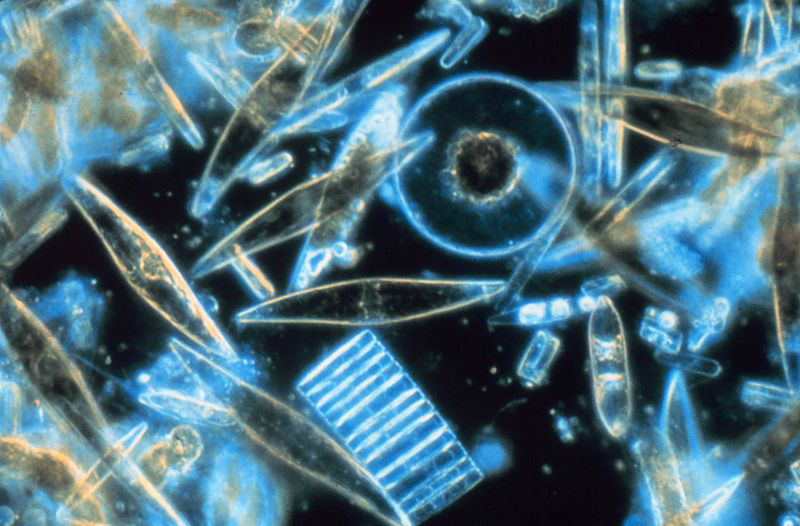 Diatoms are a common form of phytoplankton. (Wikimedia Commons)

Three years after the BP oil well disaster, scientists are struggling to understand the effects on the Gulf ecosystem. From Mind Open Media, David Levin (le-VINN) reports on the oil's impact on the tiny creatures that form the base of the food chain.

CURWOOD: It’s Living on Earth, I'm Steve Curwood. Three years after the catastrophic Deepwater Horizon oil spill in the Gulf of Mexico, scientists are still piecing together the extent of the disaster. Much of the visible oil from the nearly five million barrel spill has been scrubbed from beaches, but there is troubling news from researchers who study some of the smallest creatures that form the bottom link in the food chain. Biologists and ocean scientists from the Center for Integrated Modeling and Analysis of the Gulf Ecosystem, or C-IMAGE, have been gathering data about those tiny creatures, and reporter David Levin has been listening in.

LEVIN: For people on shore, the effects of the Deepwater Horizon spill in April 2010 were pretty easy to see. Oil washed up on pristine beaches and wetlands. Ocean life lay dying, covered in sticky brown stuff.

DALY: There was a large mortality of dolphins, sea-turtles, sea-birds—on TV, when you watch those oiled sea-birds, it's just heart-rending.

LEVIN: That’s Kendra Daly, a biological oceanographer at the University of South Florida. When the spill happened, Kendra Daly saw plenty of images like those. But she says her first thought wasn’t about the animals on TV. It was about the tiny organisms in the Gulf called phytoplankton and zooplankton.

LEVIN: They’re often smaller than sand grains, and even under the best of circumstances, they don’t live very long. Their entire lifespan might be weeks, days, sometimes hours. And after the Deepwater Horizon disaster, Daly says those plankton started dying off fast, in record numbers.

DALY: So something obviously stressed the phytoplankton and zooplankton during that time period, and of course the big suspect is the oil spill.

LEVIN: The mere fact that plankton died wasn’t too surprising, she says - some laboratory studies have already shown that certain species are sensitive to oil. But she says scientists weren’t expecting what happened next. When phytoplankton are sick or near death, they start releasing a sticky, mucous-y substance…

DALY: And so when currents and turbulence push these smaller particles together, they stick together and form larger particles. So you might have a mass of different types of dead organisms that are all glued together with this sticky substance, and so they ultimately become heavier than seawater and then can sink out quite rapidly.

LEVIN: Those sinking particles are called “marine snow.” And it’s natural in the ocean, at least in small amounts. But after the spill, the level of marine snow in some parts of the Gulf went from a flurry to a blizzard. Huge clumps of dead and dying phytoplankton stuck together, mixed with oil in the water, and formed balls of oily, mucous-y goop.

DALY: Yes, [LAUGHS] Long, stringy pieces of goop might be a better way to describe it. What we observed was much higher density of these particles than we typically observe.  And the fact that they were oiled - we could see oiled, dark brown particles - that was unusual.

LEVIN: As it sank, that marine blizzard brought oil down with it to the ocean floor, where it slowly collected on the bottom. Less than six months after the spill was officially over, the blizzard had deposited a slimy layer more than eight inches thick in some places.

SCHWING: You get this gelatinous ooze on the sea floor. It’s got the consistency of snot. I mean, it’s really gross stuff. 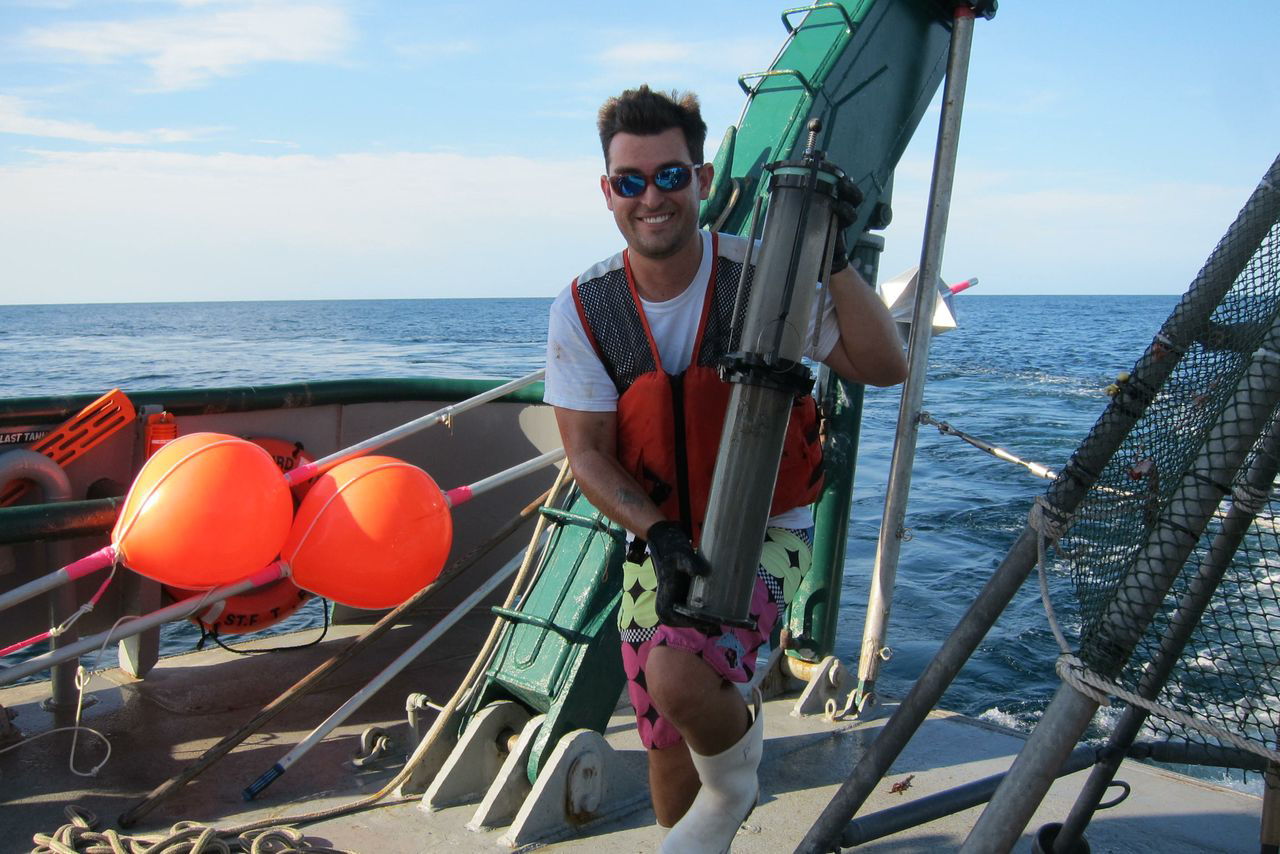 LEVIN: Patrick Schwing is a Postdoctoral Researcher at USF. The ocean floor is his domain - he studies tiny shelled animals that live in and around the sediments on the bottom. They’re called Foramanifera, or “forams” for short.

LEVIN: As the pulse of oily marine snow drifted to the bottom, Schwing says it settled right on top of where those forams live, putting them in direct contact with the oil - and with all the chemicals inside it. Even dangerous ones.

SCHWING: Yeah, essentially poison to the forams living in the sediments.

LEVIN: In other words, Schwing says, wherever there were thick deposits of marine snow, there were lots of dead forams.

LEVIN: In his lab, Schwing shows me just how bad things got. On the table, he points to tiny dishes filled with forams he collected from the seafloor in the Gulf.

SCHWING: What we've been doing lately with the forams is looking at them under a microscope, counting how many are there, who's there, those kinds of questions.

LEVIN: The first dish he shows me is from December 2010, when the layer of marine snow on the ocean floor was still thin. The forams are easy to see even without a microscope. There are hundreds of them in the dish - they look like a tiny pile of sand. But the next dish is totally different. It’s from a sample collected in the same spot three months later, once that oily marine snow had really started to pile up. By then, it was a few inches deep.

SCHWING: Moving to February of 2011, you can see with your naked eye that there's virtually no forams. Six of them in the entire sample.

LEVIN: Six, compared to the hundreds in the other dish.

SCHWING: And that says a lot. You'd expect these guys to be pretty ubiquitous on the sea floor of the Gulf of Mexico.

LEVIN: Schwing says that in some areas, those forams still haven’t come back. And that’s a big problem, because they’re the main food source for a lot of other animals on the ocean floor.
Take out forams, and you starve some species of snails and worms. But the effects don’t stop there.

WETZEL: Well, if you knock out a level of the food chain, it's a cascade effect.

LEVIN: Dana Wetzel is a senior scientist at the Mote Marine Laboratory in Sarasota, Florida. She’s investigating how fish from the Gulf were affected by the spill. Wetzel studies oil toxicity in marine life, and says it’s possible that fish feeding near the bottom weren’t just being starved as their food sources died. They were also being exposed to dangerous chemicals as they rooted around for food in the oily muck on the ocean floor. 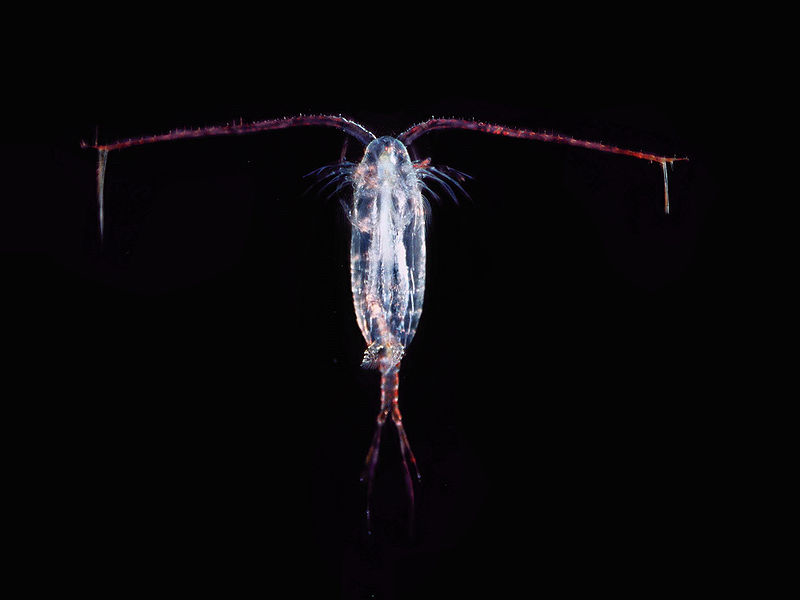 Tiny copepods are just one example of zooplankton. (Wikimedia Common)

LEVIN: She says it’s too early to tell exactly what the oil - or oily food - is doing to those fish. But in many places in the Gulf, the slimy mix of dead plankton, forams, and oil at the bottom doesn’t seem to be going away.

WETZEL: What we’re wondering is if this continued presence of oil is going to have a long-term effect on a fish's immune system and ability to reproduce, and perhaps some DNA damage effects? And is that short-term, is it long-term? These are the real serious questions.

LEVIN: In the end, wiping out the tiny creatures isn’t just an ecological disaster, it’s an economic one. When ocean life suffers, so does the Gulf’s multi-million dollar fishing industry, which has taken a big hit. And that means Gulf residents will be feeling the ripple effects of the spill for years to come.

CURWOOD: David's story comes to us from Mind Open Media. To learn more, dive into our website, LOE.org.