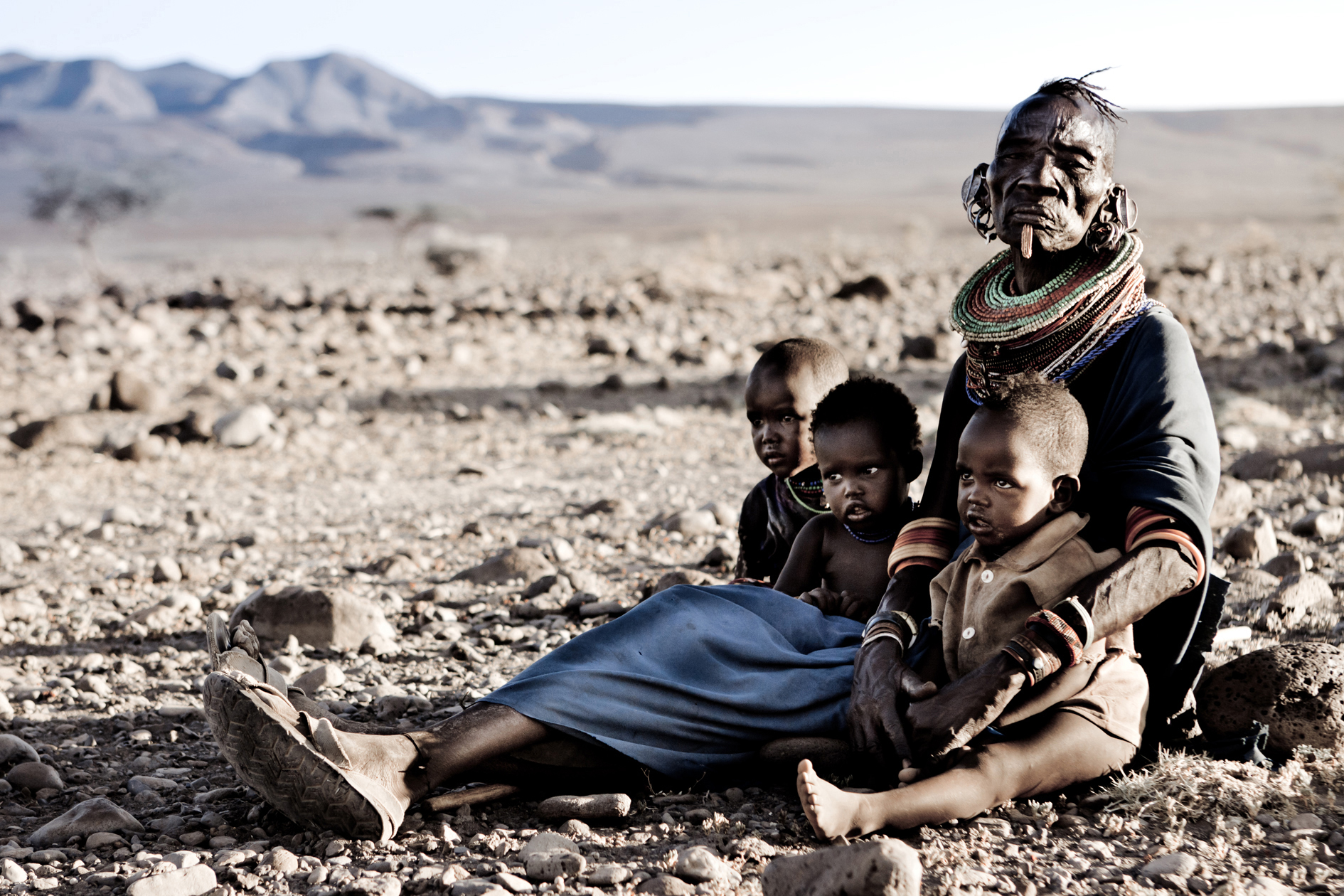 The Turkana people live around lake Turkana in Kenya and Ethiopia. The Gibe dam would seriously affect them. (photo: Survival International)

The Gibe dam in Ethiopia, under construction since 2006, could become the 4th biggest dam in the world. But Philemon Loyeli, a local activist tells host Steve Curwood that the free-flowing river is vital to local people's livelihood and Elizabeth Hunter, from human rights group Survival International, explains that the project would disrupt the annual flooding of the Omo River, and the government is ignoring their plight.

CURWOOD: One of the oldest alternatives to fossil fuels is hydro-electricity. The Hoover dam, Egypt's Aswan dam, China's Three Gorges dam - these massive facilities control flooding and generate power. They can create economic opportunity but also destroy livelihoods and ecosystems. Case in point - the Gibe dam, on the Omo river in Ethiopia, under construction since 2006, and potentially the fourth largest dam in the world. It's hugely controversial, in part because it would disrupt the Omo seasonal floods that hundreds of thousands of indigenous people have depended on for centuries. Phillemon Loyeli, a local activist, told us why the river’s so vital.

LOYELI: These communities depend on this river, it’s really part of their life. They have thousands years of fishing grounds, and also farming land. This river, it’s like - I remember one of the leaders saying it’s like our cow – you know when they depend on the cow milk? So this river is like our cow that we milk every time and this never gets old, so the government is trying to take our cow and use (it) for itself and now we will be starving.

CURWOOD: What reports have you heard from people you trust at home in Ethiopia about the violence?

LOYELI: The army has been deployed everywhere. You can’t talk anything about the dam. You can’t talk anything against the government. One of my friends whom I know was confiscated of all his electronics, his computers by the state government, and his documents and files were taken out. He’s probably in trouble anyway, and he’s scared even to talk to me because they monitor every step - even his Facebook is under them.

CURWOOD: Well, environmental activists have taken up the cause, among them Survival International. The organization’s Elizabeth Hunter explained that it’s not just the dam that’s a problem, it’s also other actions of the Ethiopian government.

HUNTER: A few years ago, the then Prime Minister Melas Zenawi announced that the government was going to literally take over a whole lot of land in the lower Omo, which is home to several tribal people, and turn it into vast sugarcane plantations. Simultaneously, we also discovered that quite a lot of land down towards the Kenyan border has been earmarked and leased out to private companies where they are embarking on growing things like cotton, biofuels like oil palm, etc. 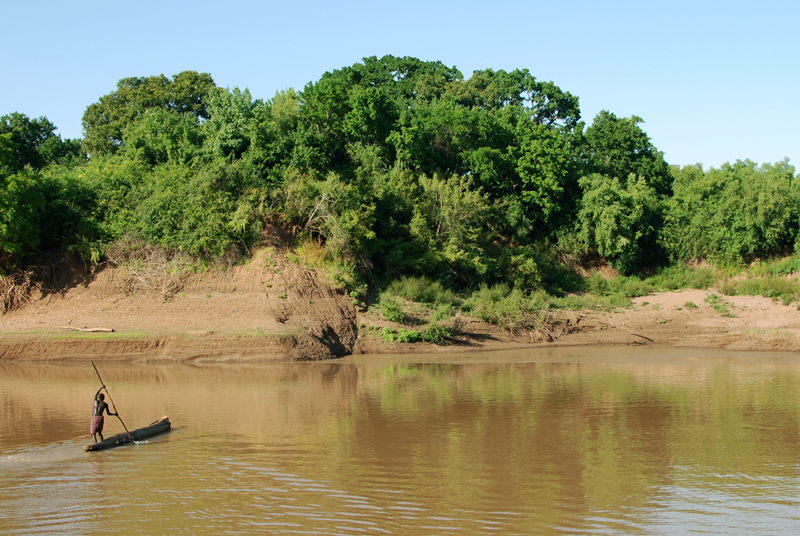 Now the only way these plantations are viable is by irrigation from the Omo. And what the function of the dam, one of the main functions, is selling electricity is going to be to regulate the flow, which will enable them to pump water to irrigate these plantations. They will also do away with the natural flood, which the tribal people depended on to plant crops - they call flood retreat cultivation. So it is effectively a double whammy. The plantations, plus irrigation, is simply going to destroy the livelihood of all the tribal people that depend on the Omo. 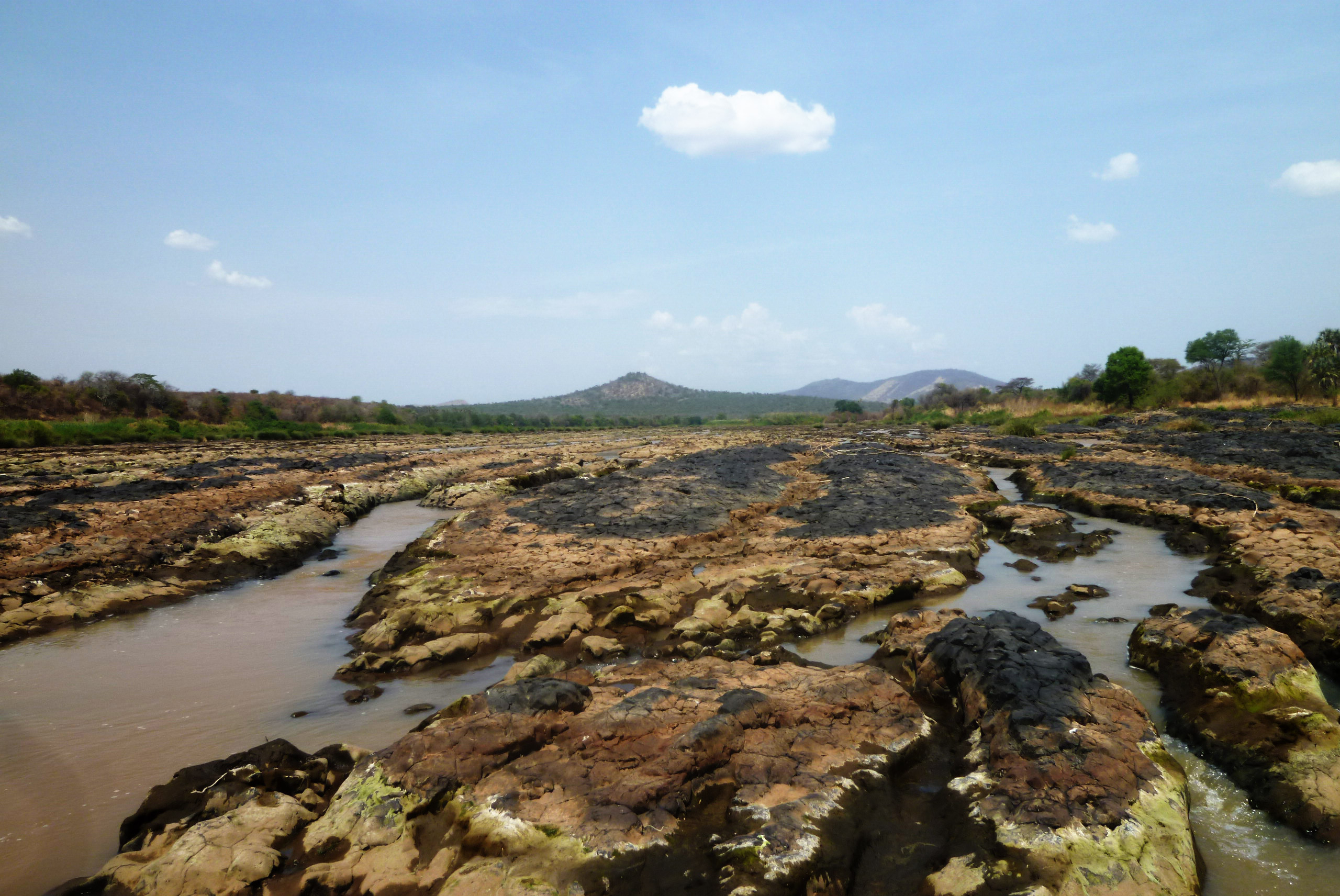 What is left of parts of Ethiopia's Omo Valley, as efforts begin to redirect the river for irrigation plans. (photo: Survival International)

CURWOOD: What is the projected economic benefit of this dam? What does the government say?

HUNTER: Well, the government has touted this as bringing immense benefit to poor Ethiopians, and it’s also enabling them to make money by selling surplus electricity to neighboring countries such as Kenya. I think the reality is what the dam is doing is enabling a land grab. The government is grabbing land that belongs to tribal people - and they are saying we’re planting sugar with all these biofuels, and this is what’s going to make money. And then the question really is, a lot of private companies stand to make a lot of money on the backs of indigenous peoples and indeed eight to 12 tribes, whole tribes of people again are affected. Can one really call this viable and is it development? I think not. Not without human cost.

CURWOOD: Now how does this fit into indigenous rights there in Ethiopia?

HUNTER: Well, the Ethiopian constitution has several articles; for example, one article guarantees that Ethiopian pastoralists have the right to free land for grazing and cultivation - as well as the right not to be displaced from their own land. There’s another article that says the peoples have the right to full consultation and expression of views in the planning and implementations of environmental policies and projects that affect them directly. 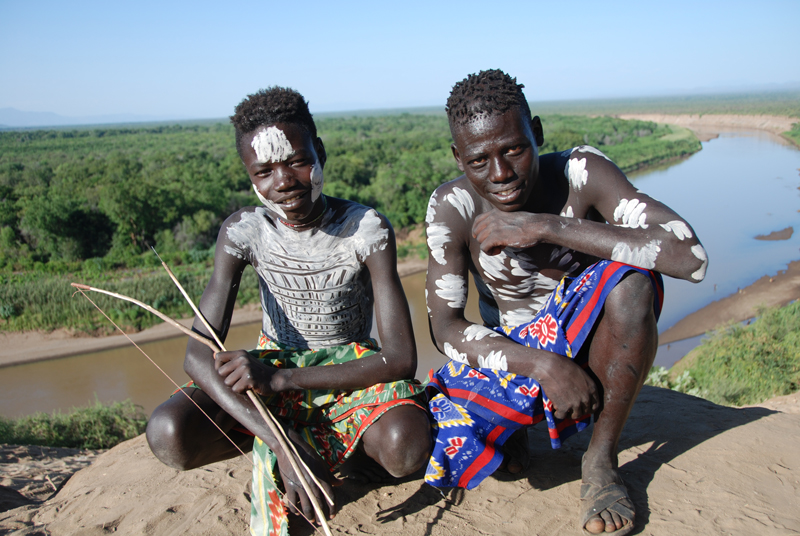 Now the Ethiopian government has simply ridden roughshod over their own constitution as well as such as the United Nations Declaration on the Rights of Indigenous Peoples on the African Charter on Human Rights. And now what is happening because of this program and turnover so much of the land along the Omo into plantations, they have simply gone in there and said, “well, we’re consulting the people.” They’ve held one or two meetings, and people have very clearly said, “we want to remain on our land.”

And where they have met opposition, the government has been incredibly heavy-handed. We’re getting reports of terrible human rights violations. I’ve interviewed and talked to people on the ground who’ve given graphic descriptions of arbitrary arrests, people being thrown into jail, being beaten up. Some people, we got reports of rapes. This is purely because people are standing up, saying, “we don’t want this on our land.” 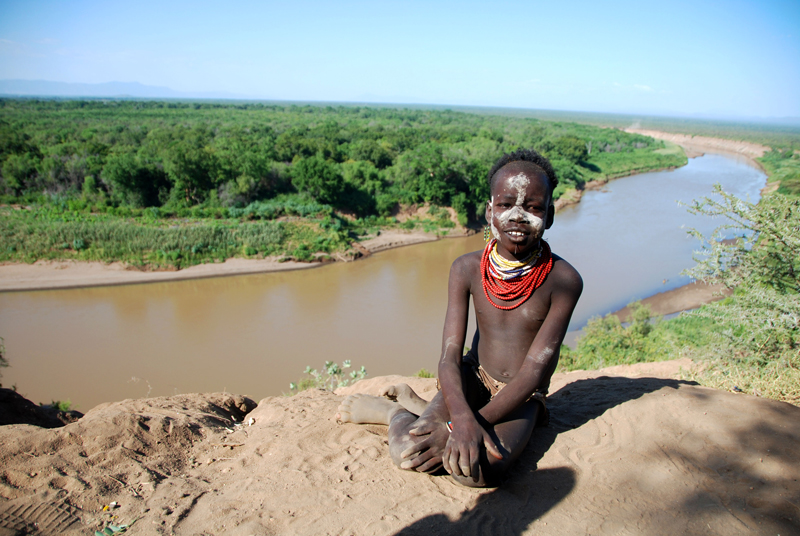 CURWOOD: What are the ecological consequences of the dam?

HUNTER: They will be very considerable. First of all, because you’ve got the plantations, the government is at this moment destroying the wildlife, destroying the environment to build these monocultures. So it’s going to be catastrophic for wildlife, as of course for the tribal peoples. In fact, the area was declared a UNESCO Heritage Site on both sides of the border of the Omo and Lake Turkana in northern Kenya.

CURWOOD: Who is paying for the construction of this dam?

HUNTER: Well, that’s an interesting question. We know that Salini, this construction company, is building the dam, and that one of the Chinese investment banks is funding the turbine. The World Bank recently announced it was going to fund the power lines, and sort of rather ducked the issue, was economical with the truth, saying it’s not funding the dam, but it’s funding the power lines. Obviously the power lines are an essential part of the dam. So the Ethiopian government has got funding from the international communities. Although it’s interesting to note, both the African development bank and the European investment bank declined to fund the Gibe dam for a number of reasons, and one of them I think was because there was a recognition this is going to be extremely serious for the peoples who live in this area.

CURWOOD: What are the avenues to take this on in court? 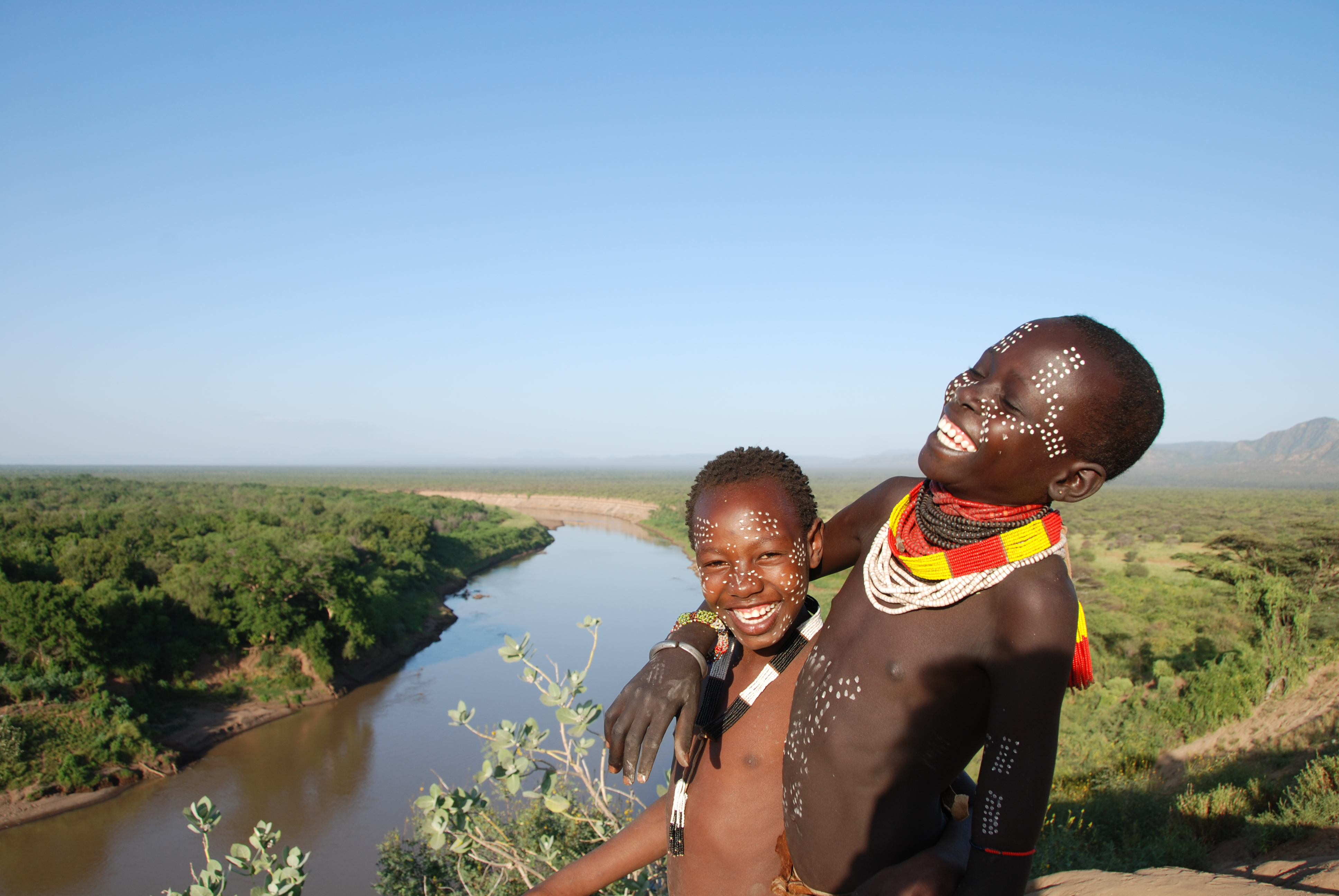 HUNTER: Well, Survival [International] has made a submission to the African Commission on Human and People’s Rights because we felt the chances of really getting any justice in Ethiopia was zero. The courts work very slowly, and there are question marks about the independence of judges. And we felt it had reached a stage where this situation is so serious that we’ll soon reach a point of no return. So we’ve gone to the Africa commission. They’re considering that petition now.

CURWOOD: You make it sound like there’s nothing to be done; this is just going to go ahead, these people are going to be displaced. Doesn’t seem like anything’s going to stop them. Or do I have that wrong?

HUNTER: No, actually I don’t agree with you. I know it sounds very bleak. But I do think there is a lot that can be done. And I think a very key point in all of this is public opinion. If enough people put pressure on their governments and the European government, I think we can see some change. For example, I did get news that this very big sugar plantation, which is known as the Couras sugar project, is not as big as it was originally envisioned, that they’ve made a smaller concession. And I think that has been...it’s just an example that they have responded, albeit slightly, to public pressure and international concern. So it is possible to change things.

CURWOOD: Elizabeth Hunter is with Survival International in London. Thank you so much, Elizabeth.

HUNTER: Thank you very much.

CURWOOD: We contacted the Ethiopian embassy in Washington. You can find its statement in full on our website LOE.org. It reads, in part: "Far from a social and environmental disaster in the making, all the evidence suggests a major and controlled social and beneficial transformation is in process. Certainly, it will impact on the local population and, yes, it will mean changes, but these will provide major improvements in living conditions and the environment."

Check out Survival’s commentary against the Gibe Dam project

Statement from the Ethiopian Government on Gibe Dam