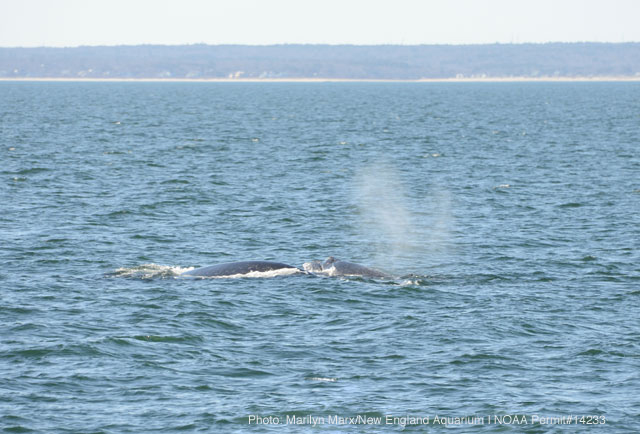 North Atlantic right whales ordinarily give birth in the balmy waters of Florida and Georgia but in January a whale named Wart gave birth in the cold waters of Cape Cod Bay. We check in to see how Wart and her baby fared since then.

CURWOOD: Back in January we reported on the right whale in the wrong place. In the winter, Northern Right whales typically give birth in the warm waters of Florida and Georgia. But this winter a whale named Wart had a calf in the chilly waters of Cape Cod Bay - the first time in 27 years of data collection that scientists had ever seen a baby Right whale that far north in the winter. And scientists at the New England Aquarium and Whale and Dolphin Conservation were very concerned that the baby might not survive. Regina Asmutis-Silvia is senior biologist at Whale and Dolphin Conservation in Plymouth, Massachusetts, and we called her to get an update on the wayward whales. Regina, welcome to Living on Earth!

CURWOOD: So, I’m on the edge of my seat here! What happened to Wart and her baby?

ASMUTIS-SILVIA: Well. I am very, very happy to tell you Wart and her baby are doing well. The aquarium reported a sighting of them on April 18. So the calf was about three months old and it looked really healthy, it looked fat. Mom was feeding so it’s a really good sign that at least while they face other threats, she’s over the hump, I think mom is...Wart is with caring for this calf and having had it in colder waters. And so it looks very, very positive.

CURWOOD: So by April 18, the calf is good to go in terms of surviving the northern winter.

ASMUTIS-SILVIA: I hope so, yes, I mean, I think that at three months old and seeing that the calf looked healthy and getting confirmation that it's still with mom and feeding - it’s very, very hopeful. There's always issues with all Right whales and all calves, particularly moms and calves, because they spend so much time at the surface, that ship strikes continue to be a concern, entanglements continue to be a concern for this species in general. But I think our concerns are a little bit elevated about the fact that it was born here [at this time of year] - that's not the problem now. It’s the problem that the population and species face in general that we’ll remain concerned about for all them.

CURWOOD: By the way, is this boy whale? Girl whale?

ASMUTIS-SILVIA: We don't know. You can't really tell by looking at them. You can do it genetically if you get a skin sample. You can do DNA testing or if they roll over, their genital slits are on the underside of the tail stalk, and there’s little slits that the moms have that are mammary slits from where the calves nurse from that are absent from the males. So unless they roll over and we get a good look at the underside of the tale stalk, you can't tell. Or obviously if you see an adult whale mom with a calf, you’ll always know Wart’s a female because she’s had calves so it's not an easy thing to visually do.

CURWOOD: How much milk does a mother Right whale give in a day to its baby?

ASMUTIS-SILVIA: The calf will drink about 40-60 gallons of milk a day, and it’s a really rich and fatty milk so while it might not seem appetizing to picture or want to consume, it's kind of...thinking like a mixture of sour cream and cottage cheese and yogurt together. And it's very rich and fatty like that.

CURWOOD: So now it’s the middle of May, and I'm wondering if Wart and her baby have been joined by the rest of the Right whales ordinarily around?

ASMUTIS-SILVIA: We did have in April a huge amount of Right whales in Cape Cod Bay, unusually on the west side of the bay - it’s not where we typically see them. Most of them have left the bay now, and we think that what they usually do is leave the bay in mid-May - end of April, mid-May - and they head out east of Cape Cod to the Great South Channel. That’s what we think they do, but I think as Wart and her calf surprised us here, there’s always potential surprises of how things are going to change. Now I think we’re all waiting to see where they’re going to show up.

CURWOOD: Now you say you saw the whales on the west side of the Cape Cod Bay - of the arm of the Cape - what does that do for them in terms of being in marine protected area?

ASMUTIS-SILVIA: It's a big concern for us because the west side of Cape Cod Bay is not protected - just the middle and east side is. In part, that’s because historic sitings have shown that they prefer to feed in the late winter, early spring. But we had not only Wart and her calf on the west side, we have probably third of the Right whale population that was on the west side of the bay at the end of April and beginning of May, and the food was very thick. I actually got a call from a harbormaster in Duxbury who told me they thought they had a Pilot whale stranded in 10 feet of water. And I went down to check it out and it was a Right whale skim feeding probably 100 yards off the beach just going back and forth - very unusual to be able to stand on a beach - the west side of the bay - and watch these animals. And we probably had at one point maybe 130 Right whales between the Cape Cod canal and Green Harbor, which is a little bit north of Plymouth. So I think that that's just really important for the government agencies to recognize that these animals do use the west side of the bay, and that area does need to be protected.

CURWOOD: So if the animals with there, then whatever they eat must be there. 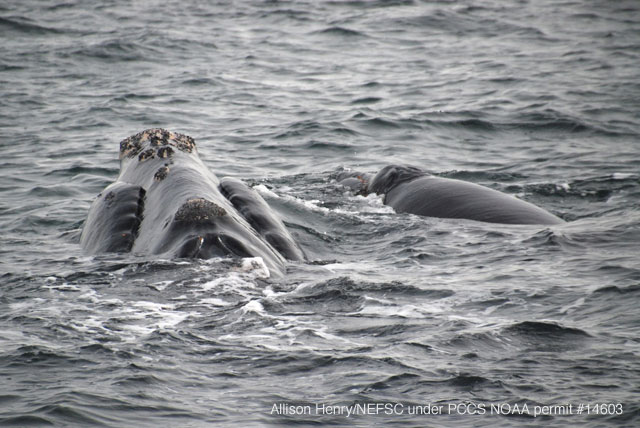 Wart and her baby shortly after it was born. (Allison Henry)

ASMUTIS-SILVIA: Yes, they’re feeding on tiny little crustaceans that are zooplankton - they’re tiny microscopic animals called copepods. And the copepods were very, very thick on the west side of the bay. We don't know how they find their food - we have no idea. Clearly, they're good at it, and they basically graze it out. And they spend as much time feeding on it as they could to a point where they had diminished the copepod population. And they take off for - in this case it’s not greener pastures, the copepods are red, so they’re looking out for redder pastures in parts of the ocean now.

CURWOOD: Where will they feed come summer do you think?

ASMUTIS-SILVIA: Usually they go from the Great South channel in early summer and then mid-to-late summer to early fall they’ll head out to Bay of Fundy in Canada and around northern Maine, going up into Canada. And again, I say usually because nothing has been usual about this year, so we're just going to kind of watch and see what happens.

CURWOOD: When we talked to you last it was too early for Wart’s baby to have a name, he hadn't yet developed the markings some scientists use to identify a whale, but has that changed anyway?

ASMUTIS-SILVIA: No, officially that calf won’t get named for probably for a year or so. Unofficially we’ve all come up with all kinds of nicknames, but no official name yet.

CURWOOD: What’s your favorite one?

ASMUTIS-SILVIA: One of the ones we were definitely kicking around, just because Wart’s the mom, is Blister. So we’ve got Wart and Blister. You know, we don't have any real official name and we’re just, name’s aside we don't...aren’t worried about the names so much as we are worried about the well-being of animals. So we're looking forward to the calf actually getting to be a year or two old so it can officially be named because that obviously will be a great celebration itself.

CURWOOD: Regina Asmutis-Silvia is a senior biologist at Whale and Dolphin Conservation. Thank you so much.

CURWOOD: And next time you see Wart, give her a hug for me, would you?