Invasive Beetles and Moths On the March 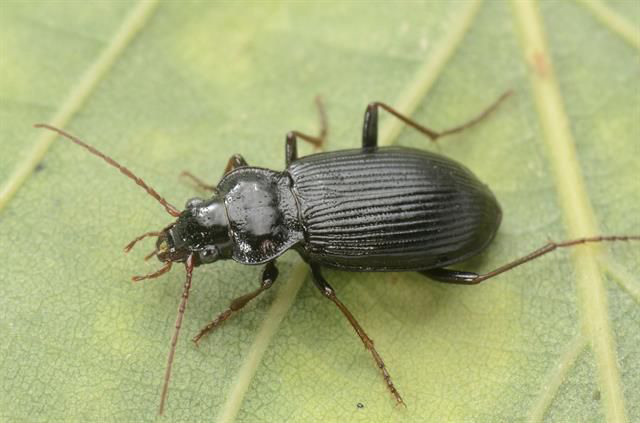 Some people find beetles creepy, with their many legs and scaly carapaces, but others, especially scientists, find them fascinating. Ari Daniel Shapiro reports on a husband and wife team that studies invasive beetles and the ecological chaos they can cause.

CURWOOD: Now many people find insects creepy and scary, with their many legs and waggling antennae, which is probably why they feature in some spectacular B horror movies. But some scientists find them totally fascinating, even though, as Ari Daniei Shapiro reports, there are good reasons to find some of them threatening.

SHAPIRO: This is the sound of a dozen black beetles, each the size of my fingernail, scampering about in a plastic baggie. They came from a single fistful of Oregon soil. The person holding that bag is Jim Labonte, an entomologist with the Oregon Department of Agriculture.

LABONTE: The beetles that you hear are an exotic European species called Nebria brevicollis, the European gazelle beetle. And they were found just a few years ago in Oregon, and that was the first detection in North America. And they have become so abundant that we are concerned that they might be starting to compete with and exclude other native species.

SHAPIRO: That’s Labonte’s beat these days. He works with exotic species. Exotic because they’re from somewhere else. And it’s not just Nebria brevicollis that Labonte’s on the lookout for. In the past few years, he’s found one new foreign species every month, and those are just the ones he’s detected.

On this particular day, Labonte’s searching for bugs in traps in a lush vineyard in Hillsboro, Oregon, outside Portland. He’s crouched down close to the ground.

LABONTE: This is called a pitfall trap. It’s set in the ground, and it’s used for catching insects that will crawl over the ground.

SHAPIRO: Labonte holds up the clear cup and eyes its contents. A mix of native and exotic bugs speckle the green liquid at the bottom. The same goes for the other traps scattered about the vineyard; some local bugs, some foreign ones. Labonte doesn’t welcome the ones from some place else.

LABONTE: It’s a type of ecological pollution, if you will. They don’t belong there.

LABONTE: So, for instance, gypsy moth looove oak trees. So where you have heavy infestations of gypsy moth, oak trees tend to diminish after a while. And they’re replaced by other trees for instance, maple trees. Asian longhorn beetle...

LABONTE: ...loves maple trees. So if that gets well-established, you can pretty much kiss off maple trees. So when you lose one species, you don’t normally lose just one species. You lose the species that are dependent on it or associated with it.

KIMBERLING: Last year we were dealing with eradicating gypsy moth here in Oregon. If it did become established, a lot of the native moths that are dependent on oaks could be outcompeted. So when those native species decline and you just have a single dominant exotic, it really does have this whole cascade of effects.

SHAPIRO: The real culprit here is global trade. Insects can burrow into packing crates, or stow away on cargo ships, and end up on a different coast, like in Oregon, where they can ravage native ecosystems.

LABONTE: So if we can detect them early, then it gives us the best chance for being able to either restrict their subsequent expansion of range or to maybe even eradicate them.

SHAPIRO: Labonte told me one story about a time he helped out with an eradication effort in Chicago of the Asian Longhorn beetle, scientific name Anoplophora glabripennis.

LABONTE: This is a species of beetle whose larvae bore in live trees. At that time, there was no recourse when you found an infested tree except you cut it down, burn it or chip it into pieces so small that no larva could survive inside of it. So I happened to go into this one yard, which had a magnificent maple tree: the canopy of the tree filled the entire backyard, and I found evidence of the Asian Longhorn beetle. And one of the most distressing things that I’ve had to do in my career was to tell the homeowner that this wonderful, beautiful tree was going to have to be destroyed. And she was clearly heartbroken, and understandably so - this tree had been part of her life. She had grown up in this house, but she understood the need to do this so that Chicago would not have such a widespread infestation of these that every tree of this type would be destroyed. And this demonstrates on a very small scale the impact of exotic invasive species.

CURWOOD: Our story on invasive beetles is part of the series, One Species at a Time, produced by Atlantic Public Media, with support from the Encyclopedia of Life.