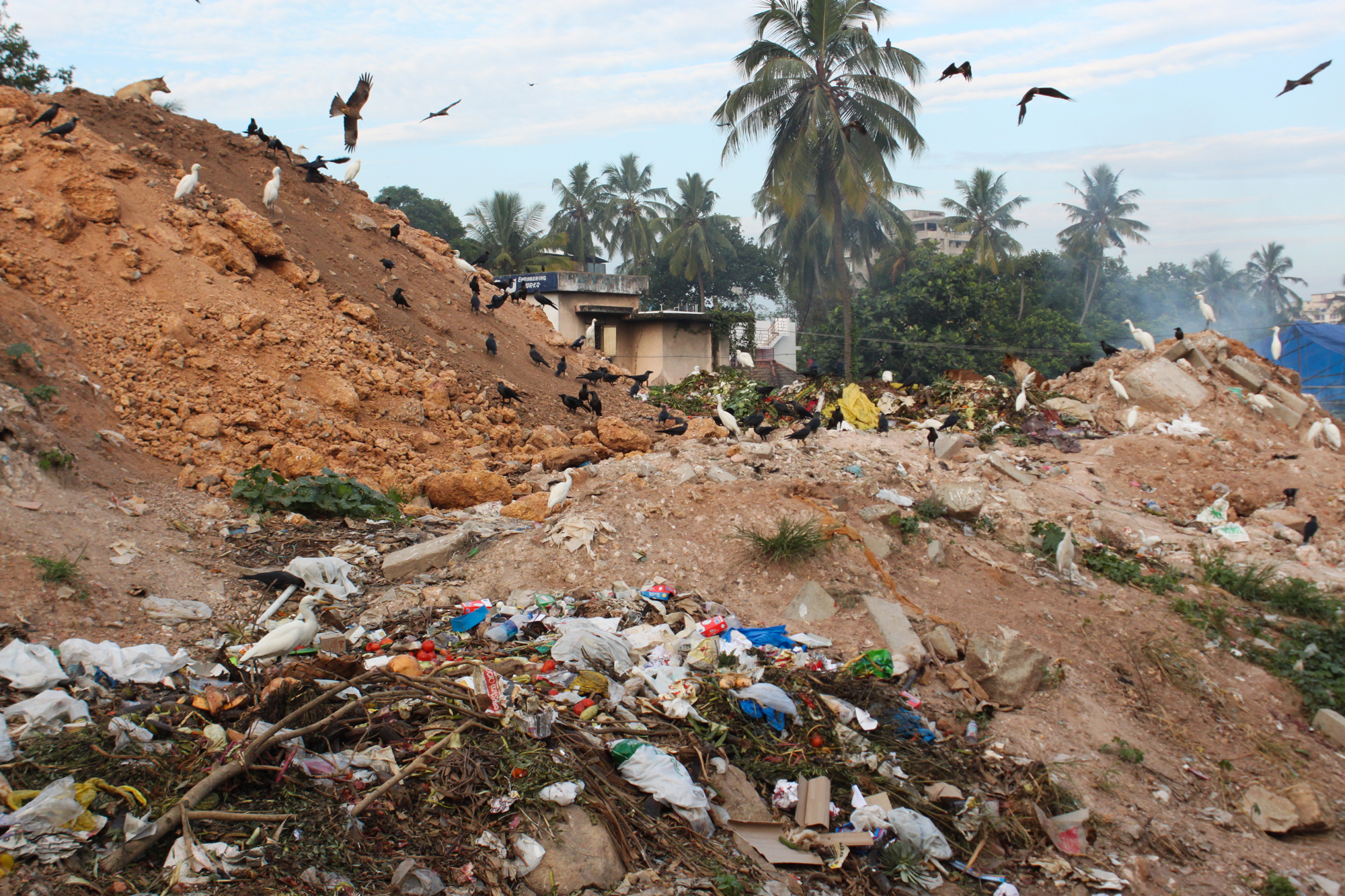 Uncollected trash piles up all over the city of Trivandrum. (Meara Sharma)

India is developing fast and rising salaries bring more consumption, and much more trash. In south India, a village chosen as the site of a trash disposal facility has rebelled. As Meara Sharma reports, it refuses to accept any more garbage from a nearby city.

CURWOOD: India was once on track to achieve enormous economic growth, and with a population of more than a billion, the world’s largest democracy was expected to become the world’s third largest economy by the middle of the century. But the promised economic growth has slowed markedly, and surveys show India is now one of the worst places to start or run a business, and infrastructure is woefully inadequate for its growing population. Among the symptoms of India’s failure to manage its leap into the 21st century are the villages near major cities that have become dumping grounds for urban waste - often with little planning and disastrous effects. But in the southern state of Kerala, one trash-burdened village is fighting back, as Meara Sharma reports.

SHARMA: There’s a funny smell in the air in Vilappilsala. It has the same whiff of sulfur you get in rotten eggs, mixed with decaying fruit, spoiled meat, and a hint of something chemical. It’s like that school painting class when you mixed all the colors together, and no matter how much red or yellow you added, it always turned out sludgy brown. This foul stench is the result of all the pungent rubbish a big city produces, thrown into one big pile in the village of Vilappilsala. And the villagers don’t mince words about their home.

VILLAGER 1: It is the most dirty place in the Kerala state. They are a dumping yard. 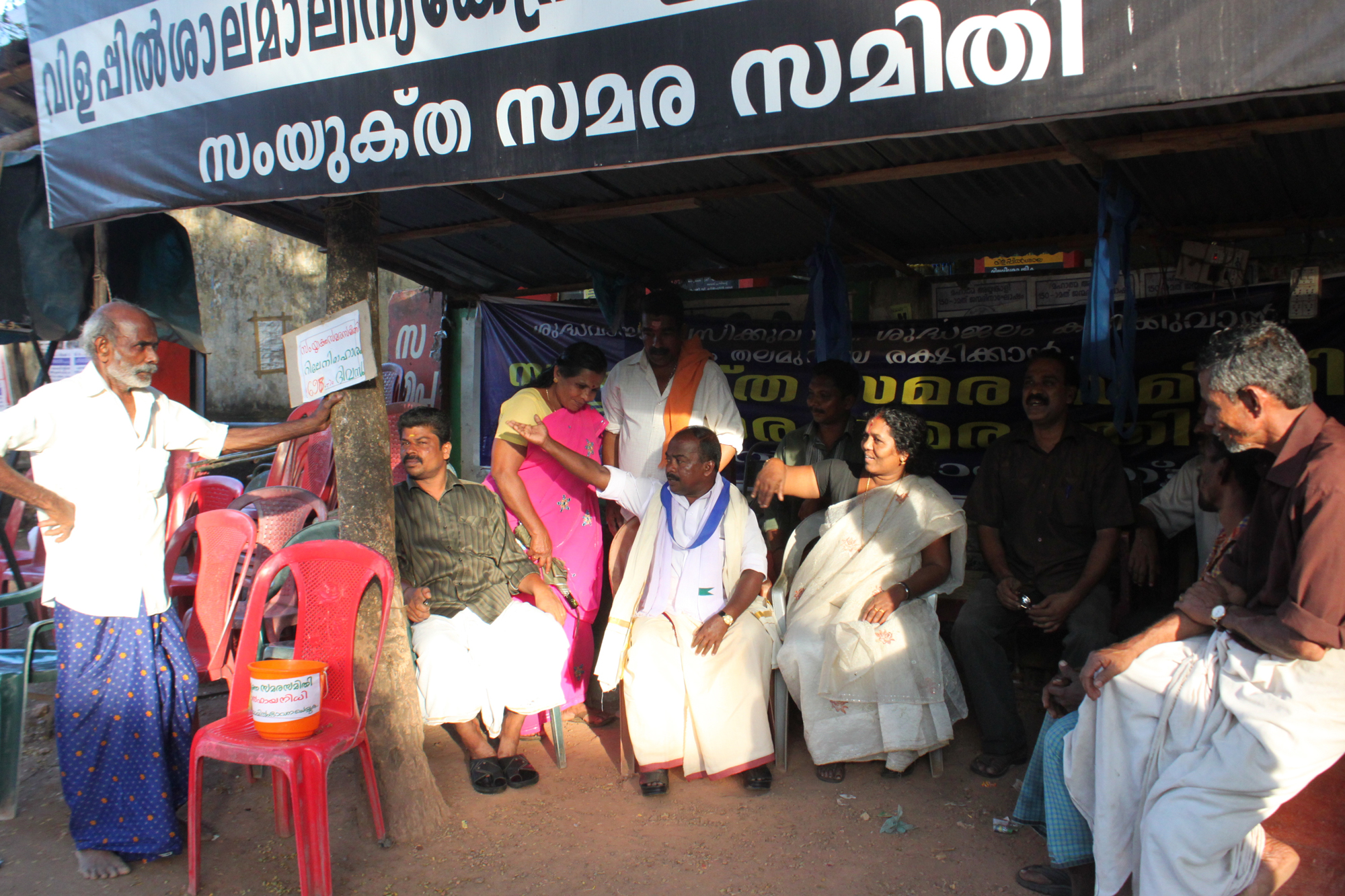 Members of the Vilappilsala panchayat (village council). To protest the garbage they've kept an ongoing hunger strike for over two years. (Meara Sharma)

SHARMA: 13 years ago, the corporation of Trivandrum - the capital of Kerala - chose the nearby village of Vilappilsala as the site of a new disposal facility to process the waste of the growing city. They commissioned a private company to build and operate it. The company planned a state of the art plant that would transform some of the wet waste into compost, or bio manure, that could be sold for profit. 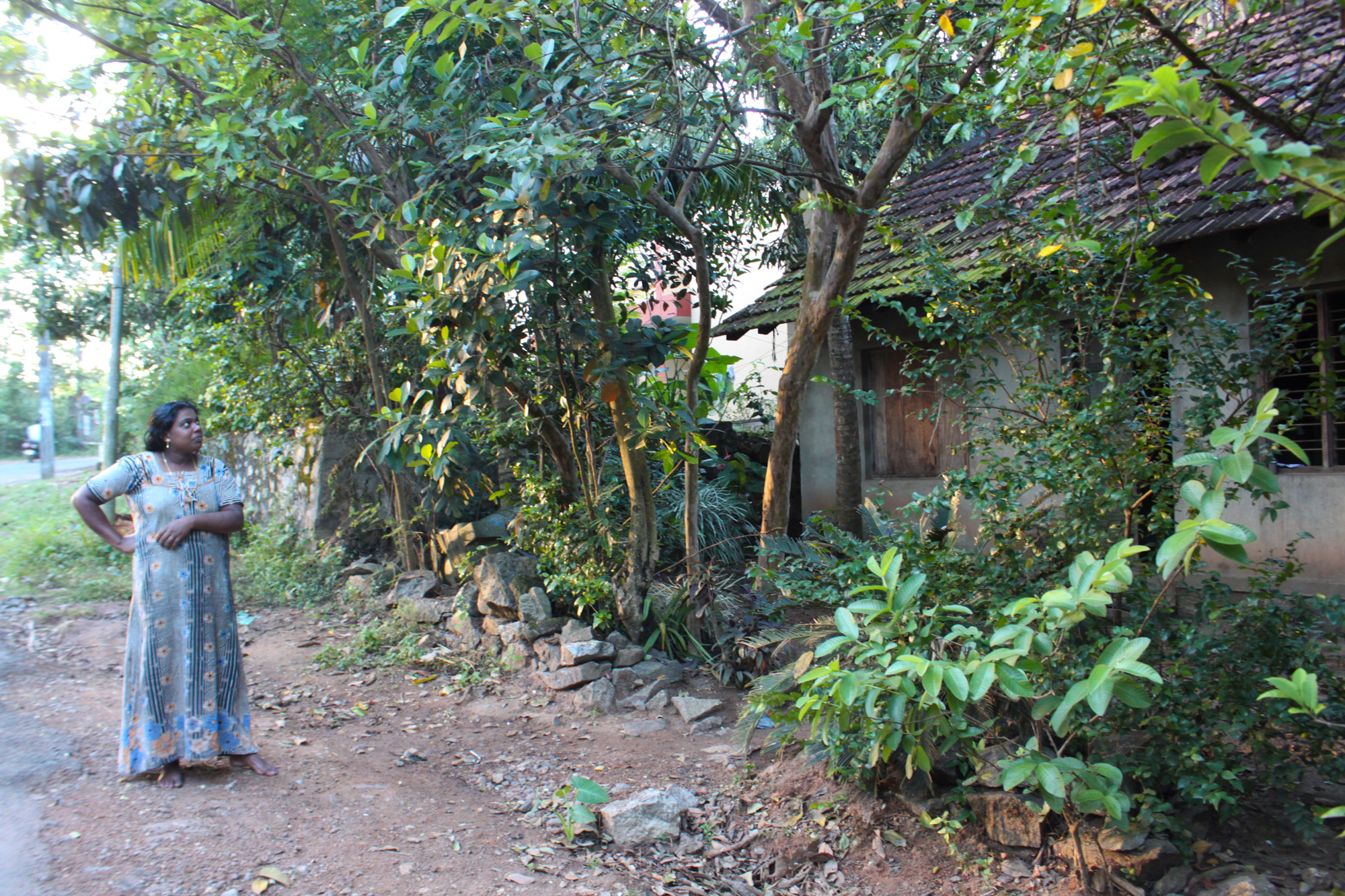 A woman beside her house in Vilappilsala. She lives across the street from the garbage facility. Most of her neighbors have fled their homes. (Meara Sharma)

As construction began, the residents of Vilappilsala were unaware of what exactly was planned. But Trivandrum-based sociologist Devika Jayakumari says they welcomed the prospect of development.

JAYAKUMARI: People in Vilippilsala, let me tell you, were also eager about growth, and things like that.

SHARMA: RVG Menon is an engineering professor and local environmentalist from Trivandrum. He’s kept an eye on Vilippilsala and the private company’s trash facility for years.

MENON: The private party had made calculations that if they convert 300 tons into bio manure, they could get enough revenue from it.

SHARMA: However, things didn’t exactly go according to plan.

MENON: Then they realized the manure that was produced by the plant did not have that much demand in the market, and then the private parties decided to process only that much quantity of waste which will produce sellable amount of manure. 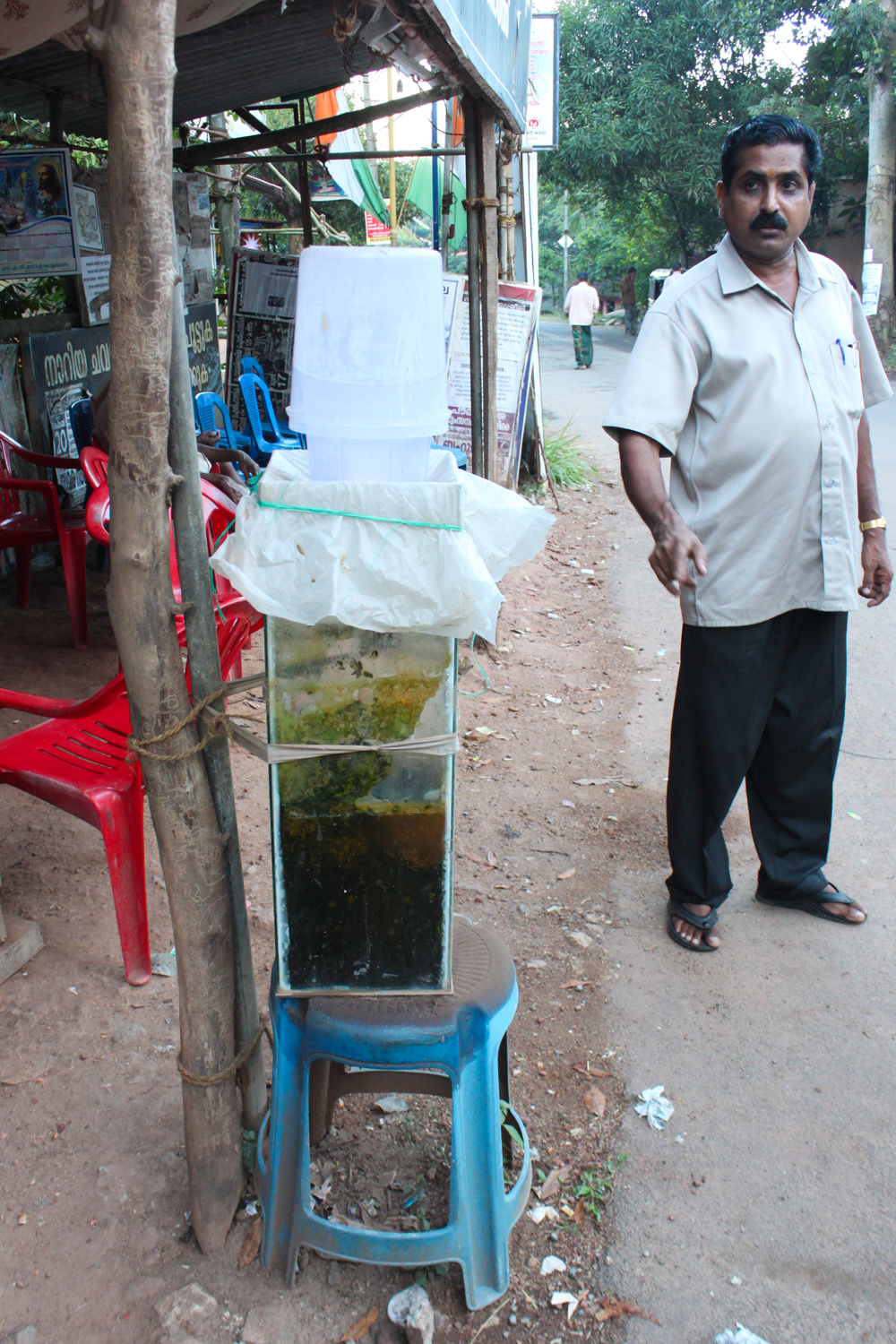 A villager showcases leachate-polluted water from the river in Vilappilsala. (Meara Sharma)

SHARMA: But though officials at the garbage facility planned to limit the amount of waste they processed, trash from the city still came in by the truckload, day after day. The company processed a fraction of the waste, and just dumped the rest - much to the dismay of the villagers.

VILLAGER 2: Gradually after 12 years it was like a huge mountain.

SHARMA: A noxious mountain that oozed black sludge and poisoned the river. After a few years, the green, coconut palm-fringed village of Vilappilsala – and its inhabitants – began to feel the physical toll of the waste.

VILLAGER 3: In 2005, the dumping yard created so many problems - air pollution, water pollution, and everything. They have so many diseases, skin diseases, some asthmatic problems, breathing problems. Because the waste smell is creating asthma.

JAYAKUMARI: The dirt was just pushed into a local stream. I remember seeing that stream before the plant – it was a beautiful silver rivulet. Turned into, dark thick, black thick, ugly, horrible smelling waste stream is what you see now.

SHARMA: Kerala is warm, rainy, and very humid. In a climate where nothing dries, it’s extremely difficult to deal with wet waste. Not only does it not compost easily, it also releases a toxic liquid called leachate. Engineer RVG Menon says the processing plant didn’t quite take these facts into account when they let the pile of trash build up, untreated.

MENON: The waste produced in Trivandrum or any part of Kerala for that matter, has about 75 to 80 percent moisture. Especially when it is raining, rainwater also falls in it, because of the drizzle, and that increases the quantity of leachate, and they had no facility for treating this much quantity of leachate. So it was overflowing and mixing with the groundwater and then coming into the stream. It was an open stream there, and that stream ends up in the Karamanah river, from which we get our drinking water. So we are also sufferers of pollution - the polluted water is distributed as drinking water and distributed in the city.

SHARMA: Word spread about the dump in Vilappilsala, and soon the village was infamous for its stench. The mountain of trash began to taint every aspect of the villagers’ lives – from land value to marriage prospects.

VILLAGER 4: You cannot sell the land because the factory nearby is creating problems. So no selling and no buying is going on. It’s the first problem. The second problem is the wedding in the near area. Bride and bridegroom - both of them, difficult to marry a girl . They say "where are you living?" "I'm living nearest the factory." "Oh that is very difficult to stay there…" So the wedding is stopped on the way.

SHARMA: Now, the importance of marriage in India can't be overstated - it’s perhaps the single most significant custom for all levels of society. But the trash issue soon became bigger than dashed marriages, and the villagers had had enough of what they call “their suffering.”

So in December 2011, they fought back. Thousands of villagers joined together and completely blocked the roads to the garbage plant. When the garbage trucks trundled in from the city, they had nowhere to go. This went on for days. When the city sent the police, the villagers refused to budge, and the plant was forced to close.

It’s been over two years since garbage has entered Vilappilsala. The city isn’t willing to abandon the plant just yet, but the villagers say they won’t rest until it’s closed for good.

VILLAGER 5: We have only one idea. That the factory is not existing here. We close it, that chapter. One time or two times, no compromise. The countryside people’s are in strong decision. We will not allow the vehicles in Vilappilsala.

SHARMA: While this gridlock festers, the city of Trivandrum has ceased all trash collection – there’s nowhere to put the garbage. Trash piles up in corners around the city. People slyly toss bags off the side of highways, or burn their waste on small streets. The current Mayor of Trivandrum, K. Chandrika, recognizes the plant cannot cope with the scale of waste produced in the city, and proposes shifting some of the burden away from the plant.

CHANDRIKA: We need process only 90 tons of the garbage there. And we are trying to decentralise our garbage to the household level itself.

SHARMA: But she insists that the plant has to reopen and has gone to the courts to force the villagers to stop their blockade.

CHANDRIKA: It is up to the court to consider, the high court considers all the matters. The people should obey the law.

SHARMA: While the villagers of Vilappilsala are firmly opposed to bearing the burden of trash they didn’t produce, the challenges facing the village and city are larger than a blame game.

No one in the country is impervious to India’s mounting waste. But reducing the amount of trash that ends up in the dump would involve serious government intervention through recycling programs, packaging regulations, and innovative approaches to trash management. One new effort in Kerala uses trash as a construction material to build railway platforms. So cities around India are trying, but it’s not working smoothly anywhere, yet.

Engineer RVG Menon treats the little waste he produces in his own yard, but he knows this isn’t possible for everyone.

MENON: So I think a centralized treatment facility is unavoidable in a city like Trivandrum, or in any city for that matter. You have waste collected from the marketplaces, street cleaning and government offices where they don’t have facilities for disposing of waste, so this is the responsibility of the corporation - they have to collect it and they have to have central facilities.

But unfortunately nothing is possible in Vilappilsala now. The people won’t listen to anything. And until Vilappilsala is no longer like this, no other neighborhood will allow this facility in their backyard. So the way out is for the government to find some location reasonably big and in the control of the government, where they operate a model plant with no anxiety and convince the people it is possible to do it this way.

SHARMA: At the moment, India produces 115 million tons of solid waste every day. And by 2030, there'll be 1.5 billion Indians, and half of them will live in cities. So how India tackles its trash is critical. And with population levels rising across the world, this is an issue for all cities that send their garbage away from urban areas. For the sake of the natural and built environment, trash disposal can’t remain out of sight, out of mind for long.

[This report was produced by Meara Sharma and Henry Peck]