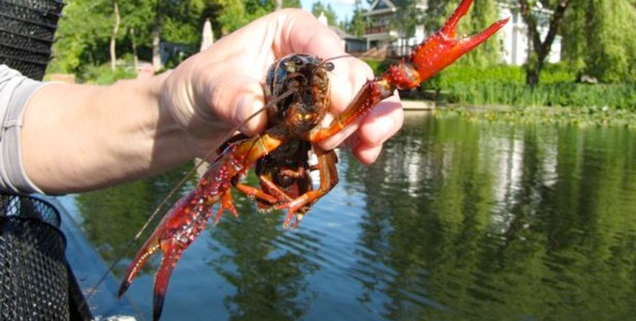 The Red Swamp crayfish, native to the US south-east, are now firmly established in the Pacific north-west, and as Ashley Ahearn reports, they threaten to outcompete the local blue Signal crayfish.

CURWOOD: It's Living on Earth, I'm Steve Curwood. If you're a fan of Gulf Coast cooking, you probably love gumbo and jambalaya. But those spicy delights are hardly the first thing you'd expect to find on menus in the temperate Pacific northwest. That could be about to change though, as the invasive red swamp crayfish is now being found in some lakes in the northwest. The crayfish, or crawfish, or crawdad, is a native of the southeastern US and the Gulf coast, and notably delicious. Ashley Ahearn of the public media collaborative EarthFix, has been investigating.

AHEARN: About 20 miles east of Seattle you'll find Pine Lake. It's a small body of water, only about 40 feet deep and lined with well-kept homes. Yellow labs patrol green lawns and sunny docks. Bass and trout fishermen share the water with laughing kids on paddleboards.

AHEARN: But beneath the surface‚ down in the depths of Pine Lake.

OK. OK. No sharks here. But there's a new creature on the block‚ with really big claws.

OLDEN: This is called the red swamp crayfish.

AHEARN: Julian Olden sits in a canoe on Pine Lake. He pulls a flailing red crustacean out of a trap and holds it gingerly as it waves its claws around.

OLDEN: If they pinch you they hang on for a little while.

AHEARN: This spoken from experience?

OLDEN: Yeah you have to convince them to let go but you can grab them right under their arms like that‚

AHEARN: Olden is a freshwater ecologist with the University of Washington. Over the past several years he’s been setting traps around this lake to monitor the advance of these aggressive intruders. He puts the red crayfish down and it scuttles around the bottom of the canoe, dangerously close to his bare toes.

OLDEN: It's about 4-5 inches length total, so that's what you'd expect to see.

AHEARN: Olden says these intruders could be changing the native ecosystem. The red swamp crayfish eat tadpoles, bass and trout eggs. They also munch through the plants that line the bottoms of lakes like this one.

OLDEN: And by basically being an underwater lawnmower they're removing the home and cover for a lot of those native fish.

AHEARN: You might call Pine Lake ground zero for the red swamp crayfish invasion. A biologist discovered them here in 2000. They've since shown up in nine other lakes in Washington. Wildlife managers have also reported them in a few places in Idaho and the Willamette River.

OLDEN: So we're just going to head over to this bay.

AHEARN: This wasn't natural colonization. In at least one instance, these crayfish were intentionally released after being used for research or as classroom pets. But on this lake anyway, the red swamp crayfish have been met with some local opposition. Olden pulls up another trap and out plops a member of the home town team‚ a Signal crayfish.

OLDEN: Take a look at the blue color on that. So these are olive brown on the top of them and then you flip them over and they all have this blue tinge and a red on the underside of their claws. Just a gorgeous color.

AHEARN: Signal crayfish have lived in this region for the past 10,000 years or so. But Olden's research has found that at Pine Lake anyway, they've been overtaken by the red swamp crayfish.
The blue-shelled locals don't breed as often as their crimson competition, and when they do, they don't produce as many offspring. They also prefer cooler temperatures so in the future, things may not look good for them. For now anyway, they're getting some help in the fight.

OLDEN: Hey Renee how are you?

AHEARN: Renee Henderson and her daughter Solana are among 40 or so homeowners on Pine Lake who are working with Julian Olden to trap the invasive crayfish. At eight-years-old, Solana is one of the lead trappers. She crouches down on the dock and hugs her knees as she talks to us.

OLDEN: You were just telling me about the big whopper of a crawfish that you caught. How big was it?

AHEARN: Do you know how many you've caught?

SOLANA: I pretty much don't know because we’ve got a lot and that’s all.

HENDERSON: We've done a lot of googling recipes for crawfish pie, crawfish boil. It’s been good for her just learning about the environment and how to protect it. She’s obviously into science.

AHEARN: All the participants in Olden's study keep data sheets tallying up how many crayfish they catch, and what the breakdown is between red swamp crayfish and the native Signal crayfish. So far this year Pine Lake residents have trapped and removed around 500 red swamp crayfish. Olden says some years they’ll catch upwards of 800 of them.

OLDEN: You know on days like this with all these people with traps in the water you’re pretty inspired, knowing that hey we might have a chance - not to remove them‚ eradicating them is pretty much impossible - but controlling them to low enough level where their impacts are minimized, that's what we hope will happen over the next couple years.

AHEARN: Olden also hopes that this model of local engagement can be replicated in other lakes where the invasive red swamp crayfish has staked its claim. I'm Ashley Ahearn on Pine Lake.

CURWOOD: Ashley reports from the public media collaborative EarthFix. For photos, scuttle off to our website, LOE.org.