Hip Hop Born in the Parks 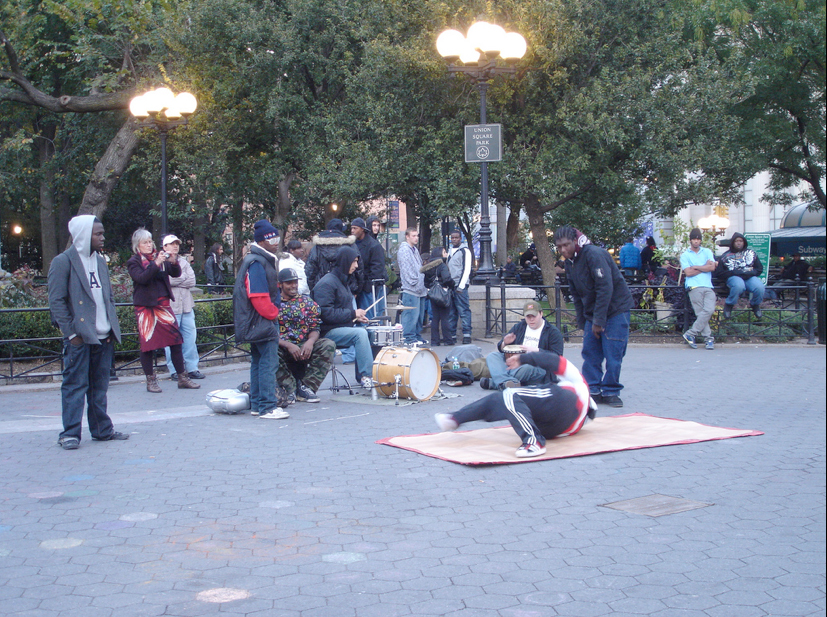 It’s summer time, and for city folks that can mean heading to the park to get together with friends. Grist contributor Ben Adler tells host Steve Curwood that open spaces like Manhattan’s Union Square park saw the emergence of the musical genre hip hop.

CURWOOD: Ahhh, summertime! For people in the country or suburbs that might mean heading to the lake or a barbecue in the back yard. But for folks that live in urban areas, the city park is often the best place to get together.

CURWOOD: Now the biophilia hypothesis argues that people become more creative in green spaces, and one bit of evidence may be the combination of spoken poetry and infectious beat known as hip hop music. Hip hop got its start as a genre in urban parks, as Will Smith’s 1992 hit Summertime reflects. At least, that’s the take of Grist magazine contributor Ben Adler.

ADLER: Will Smith is from West Philladelphia and of course Philly has some great parks, Fairmont Park being the most famous. I mean, Summertime really is a classic. He’s talking about the positive sides of the urban experience of parks. People in cities, they don’t go away for the whole summer, they don’t go to sleepaway camp with their children, they go to the parks. He’s presenting that in this very joyful way. These are the joys of summer, playing ball, having barbecues. It’s a place to meet girls and it’s sort of the epitome of the summer jam.

CURWOOD: So tell me, what are the roots of hip hop?

ADLER: Well, hip hop was born in the South Bronx in public housing projects. It’s party music. Parties and deejays - if you’ve ever been to a Bar Mitzvah, you’ve observed that parties often have deejays - and the deejays often act as emcees, masters of ceremonies, with a microphone. And they encourage people to get out on the dance floor, right? Hip hop came out of those kinds of parties. There was immigration from Jamaica, and there were Jamaican deejays who brought some of the deejaying traditions from there to the African American community in New York City. And they started mixing records, and the master of ceremonies, the emcee, would sort of joke around, and talk gibberish on the microphone, you know, ‘hip to the hop, you don’t stop’, kind of thing. And hip hop came out of those kinds of parties. Big parties held in like a rec room of a public housing project and parks where people could gather, people who didn’t have money, people who weren’t of age to go to a place where you have to pay to get into, like a bar, or have an ID to get into. Mostly famously, Manhattan’s Union Square Park, that is really where hip hop was invented and developed and came up.

CURWOOD: Yes. Let’s listen to hip hop song that talks about that early scene. This is MC Shan from 1988.

ADLER: One of the really interesting thing about hip hop from the late ’80s is that that’s what we call old school now. It sounds so primitive. It was already, you know, a decade after it started to break out. And already you had nostalgia, songs about how the heyday of park jams was already over. The park was where hip hop was made. MC Shan was a really important figure in the development of hip hop; he was the main emcee in the Queens-based Juice Crew, and he had a rivalry with KRS-One. At the time, MC Shan was bigger, but KRS-One really went out to eclipse him to become a hugely legendary figure.

CURWOOD: KRS-One; tell me more about his story.

ADLER: KRS-One grew up partly in Brooklyn and partly in the Bronx. When his family was living in Brooklyn, as a teenager, he ran away from home. He was homeless, and he slept in public parks. He ended up in a homeless shelter in the Bronx where DJ Scott La Rock was a youth counselor. And the two of them got together and started making hip hop music. But after Scott La Rock was killed, KRS-One adopted a socially conscious, progressive world view. He went on to embrace feminism and vegetarianism. KRS-One, because he was sleeping out in the parks, that’s where the park jams were happening.

CURWOOD: Hey. The last song I want you to talk about, Ben, is Arrested Development’s People Everyday. This song takes place entirely in a park.

CURWOOD: What’s the message behind this song?

ADLER: Arrested Development had this style that was, you know, they wore this sort of African inspired clothes and Speech the emcee wore glasses. And it was very overtly Afro-centric and overtly intellectual, and they make this song about just a sort of typical day which Speech describes himself as a fashion misfit. He’s hanging out at the park. It’s a beautiful day. He sees his girlfriend, and then a group of men who are drinking, they start harassing his girlfriend, and it ends in a fight between him and one of the men, but it’s not celebrating that’s what happens, it’s decrying it. It’s an overt plea for mutual respect in the community.

CURWOOD: So what do you expect going forward now in terms of music inspired by parks and public space?

ADLER: Unfortunately, I think mainstream hip hop for the last maybe 15 years has been dominated by corporate commercial acts, that they’re often from these really kind of suburban cities where parks play less of a role. So the setting for songs is in cars. You could say it’s not as ecologically friendly of a sort of setting. The connection between hip hop and parks had a lot to do early on with its roots in New York City. Commercial mainstream hip hop has sort of been taken over and ruined by the suburbs, like most everything else in this country.

CURWOOD: Thanks so much, Ben.

CURWOOD: Ben Adler is Managing Editor of YearsOfLivingDangerously.com and a frequent contributor to Grist.


(Content and language may not be appropriate for young listners)