Working Woodlands for Carbon and Cash

The Nature Conservancy's Mike Eckley uses a prism to identify trees to include in an inventory of the Lock Haven forest. 1000's of small plots will be documented in the 22,000 acre forest. (Photo: Ann Murray)

Nearly three-quarters of Pennsylvania's woodlands are still in private hands. As Ann Murray reports, the Nature Conservancy has helped develop a program to persuade land-owners to preserve forests by rewarding them for the carbon the trees sequester.

CURWOOD: It’s Living on Earth, I'm Steve Curwood. When it comes to fighting climate disruption, trees are some of the most effective front line soldiers. An acre of healthy forest can pull as much as 3 or more tons of carbon out of the air each year, and the bigger the tree the more carbon it can store or sequester in its trunk. The state named after founder William Penn’s woods---Pennsylvania—has plenty of forests, about 70 percent in private hands. These woods are the subject of a value-added program developed by the Nature Conservancy that is designed make money for forest owners while still sequestering carbon and keeping the air and water clean.
The Allegheny Front’s Ann Murray has our story .

MURRAY: A Pennsylvania forest has a new, surprising ally. You might even call it a sponsor.

MURRAY: Chevy Equinox is not just a smallish SUV the auto giant is marketing to the young and hip, it’s also paying to keep a forest a forest. Bethlehem, Pennsylvania Water Authority gets paid by Chevrolet for each ton of CO2 that the trees in its 22,000 acre forest pull out of the air and store in their trunks and roots. That’s according to Steve Repach, the authority’s director.

MURRAY: Bethlehem is the first partner in The Nature Conservancy’s Working Woodlands program. A model project that the Conservancy has put together with Blue Source, a carbon credit developer in California.

Working Woodlands is one example of  what you might call value-added forestry. That is, a way to keep forests healthy while also making money off them.

WILLIAMS: For the landowner they get kind of a one-two punch.

MURRAY: Roger Williams is the president of Blue Source, the carbon brokerage.

WILLIAMS: Several years ago, we began conversations with the Nature Conservancy and the intent was to combine FSC forest certification with the creation of carbon credits for landowners that wanted to participate in that market.

MURRAY: FSC is the Forest Stewardship Council. Timber with an FSC certification can be sold for more than regular wood, kind of like organic for trees. Carbon markets let companies and others pay forest owners to store CO2 to compensate for their own greenhouse gas emissions.

With that in mind, the city of Lock Haven in north central Pennsylvania has just signed on with the Conservancy. Their next step is to take a really close look at their 5000 acre property.

[POUNDING REBAR INTO THE GROUND]

MURRAY: The look begins with an inventory of trees. Forester Mark Banker pounds rebar into the ground to mark one of a 1,000 or so small plots that will be documented. The Nature Conservancy’s Mike Eckley calls out the trees he wants to be measured.

ECKLEY: Let’s start with that white pine, right ahead of you.

MURRAY: Banker loops a tape measure around the trunk of the tree.

MURRAY: Eckley records the diameter of the tree and other notes about the tree’s health and timber value into a hand-held device. An independent auditor will come in later to verify the numbers, and will do it again every five or ten years on permanent plots.

MURRAY: The information will help the team decide things like what trees to cut, and when. Computer models will predict how much carbon the forest can store. This is key for the carbon markets this forest is tied to.

You can’t just rent out your woodlot to qualify for these programs. You have to prove that you’re increasing the amount of carbon absorbed by actively managing these woods. And you only get paid for the increased amount of carbon your trees store. 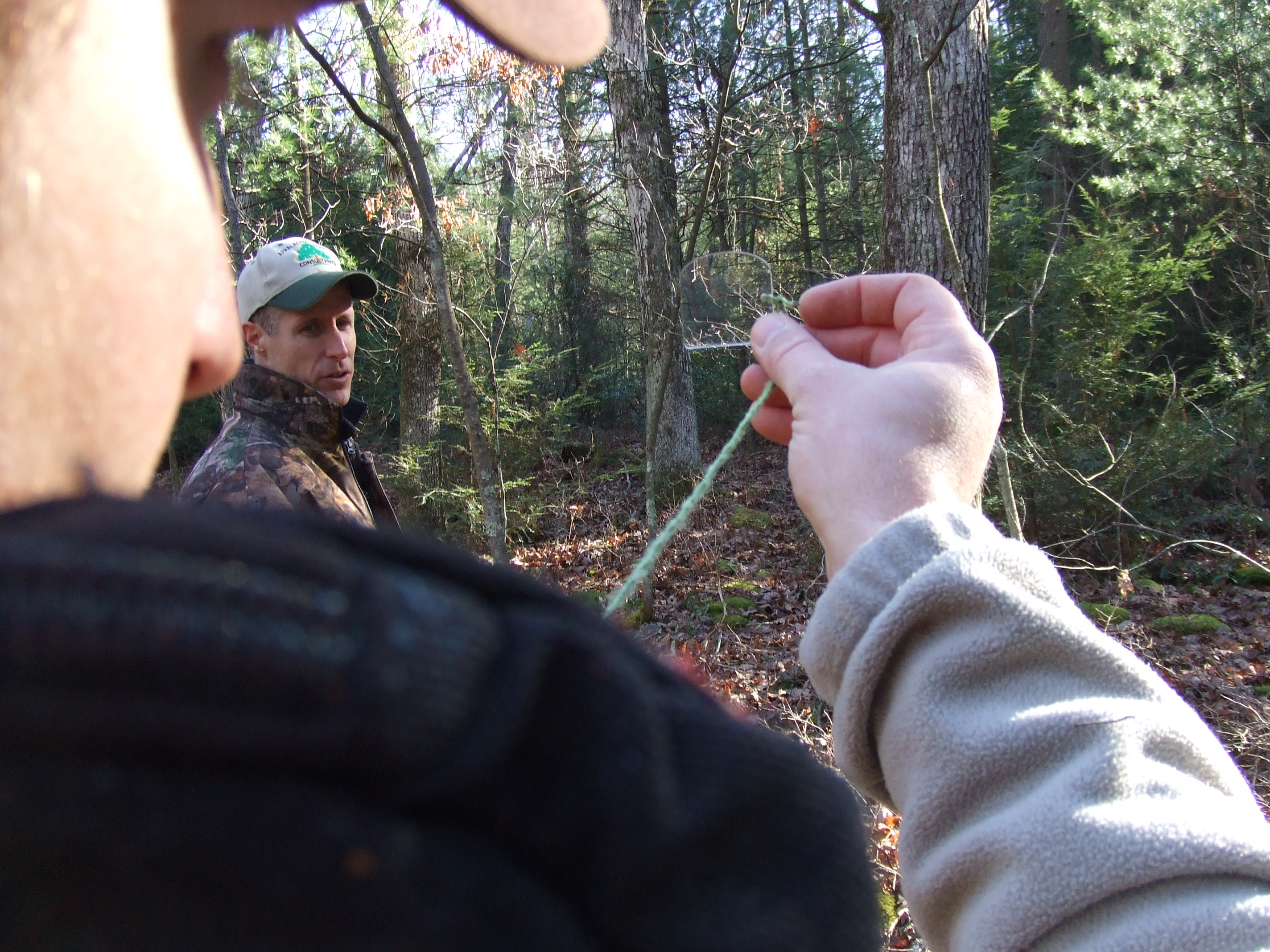 The Nature Conservancy's Mike Eckley uses a prism to identify trees to include in an inventory of the Lock Haven forest. 1000's of small plots will be documented in the 22,000 acre forest. (Photo: Ann Murray)

PARRISH: I tell them that there is money in them there trees! They can be rewarded by sustainably managing their property for quality and for quantity. The higher quality trees you have, the faster typically they grow. Growing bigger and older trees will sequester more carbon.

MURRAY: Like Bethlehem, Lock Haven is happy about the chance to make money in the carbon market and sell the higher-priced FSC-certified timber. But in both cases their real priority is protecting their watershed. Healthy forests filter and cool streams that pass through them. That’s why the Lock Haven authority has been buying woodlands in their watershed since 1850. There are of course, other benefits to keeping woods around.

MURRAY: Walk on recreation will be allowed under Lock Haven’s new agreement along with hunting, timbering, possibly deep shale drilling. Josh Parrish of the Nature Conservancy says after all, this is the Working Woodlands program.

PARRISH: Conservation has been moving from set-asides to sustainable management, and that’s where our conservation easements are moving; from being “thou-shall-nots” to working with landowners and to manage lands for sustainable harvest, carbon for climate.

The Spring Run Hemlock Biological Diversity area is in one of the plots that will be documented as part of the Lock Haven forest inventory. The run is part of the water supply for the city. (Photo: Ann Murray)

MURRAY: The Conservancy hopes to expand Working Woodlands to other Appalachian states and is currently in China in Szechwan Province. There’s a temporal forest there that looks a lot like the Appalachian woods.

CURWOOD: Our story on forests comes to us by way of the Pennsylvania public radio program, The Allegheny Front.