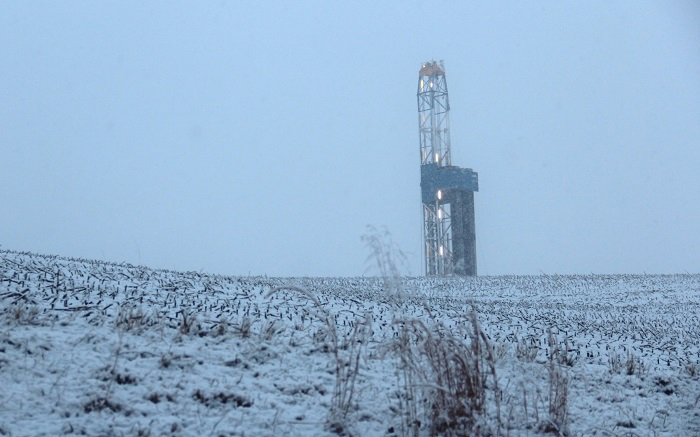 Amish communities live a simple life, and mostly shun modern technology. But in Carroll County, Ohio, many Amish farms sit on top of rich gas shale beds, and most Amish there welcome fracking, and its rewards. Reid Frazier reports.

CURWOOD: It’s Living on Earth, I'm Steve Curwood. Electricity, TV, the internet. The Amish generally live without these technologies, preserving a traditional way of life. But some Amish are saying yes to one very modern, very industrial technology: hydraulic fracturing or fracking for natural gas. In Ohio, some of the best pockets of oil and gas in the East run right under Amish country. The Allegheny Front’s Reid Frazier found the drilling is already changing the way some Amish there live.

FRAZIER: It’s an overcast day in Carroll County, Ohio, in the Southeast part of the state. An Amish farmer - dark wide brimmed hat, long beard, buttonless overcoat - is at work on his hillside farm. He mans the seat of what he calls his ‘hired hand’. It’s a skid steer loader, a kind of mini bulldozer he uses to haul huge piles of feed corn around his dairy farm.

FRAZIER: The Amish stay away from modern technology - but they do make some exceptions, and this diesel powered machine is one example. He was able to buy the machine with a new source of money - royalties. He leased his land for drilling a few years ago - he only got $15 an acre back then. But two years ago, Chesapeake Energy drilled a well on a neighbor’s farm. At around 7,000 feet down, the drill bit turned sideways, and went underneath his farm, following an oil and gas rich rock called the Utica shale. Soon after, he began receiving royalties - he won’t say how much.

The farmer, following the beliefs of most Amish, wouldn’t allow his voice or name to be used on the radio. But off tape, he said he saw no problem leasing his land for drilling. In his slight German accent, he says, The land was made for people to use. 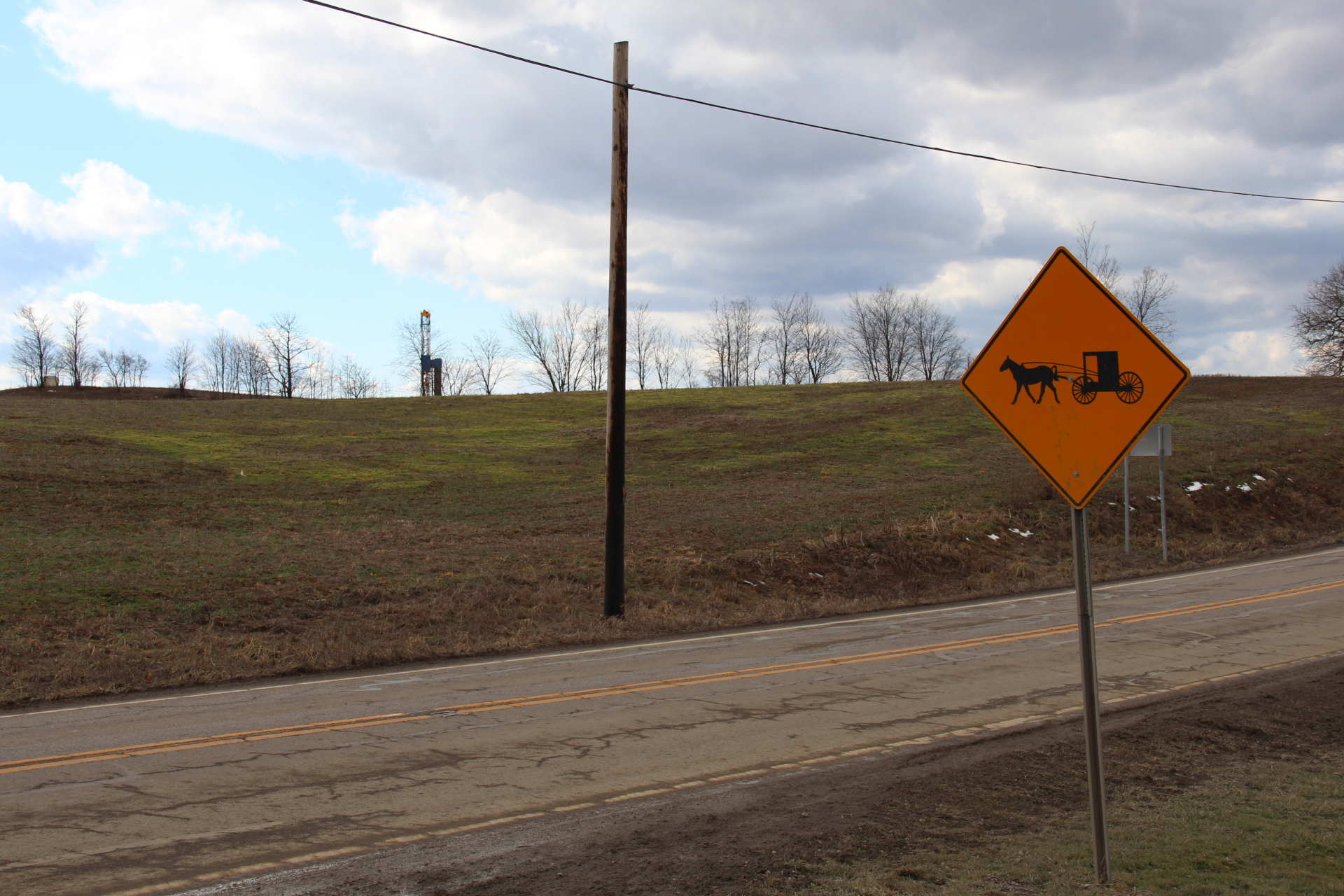 Many of his Amish neighbors feel the same way, and have leased their land for drilling. Rigs continue to migrate into this rural county - there are no four lane highways here, hardly any water and sewer services, and you can forget about most cell phone coverage. Drilling represents a whole new source of income for the Amish here, says Tom Wheaton. He’s a Carroll County commissioner.

WHEATON: I’d like to see how they’re going to handle it because it makes a major change for peoples’ lives.

FRAZIER: Case in point, one Amish dairy farmer. He’d been making $40,000 a year from farming.

FRAZIER: There is worry this kind of money could have a corrupting influence. As the Amish farmer with the new skid steerer says, The love of money is the root of all evil. And even if you didn’t want it, Ohio law makes it very hard to keep the industry from drilling under your land, if your neighbors want to drill on theirs. In those cases, the state can mandate your land be included in a drilling unit.

Because of this, and simple economics, drilling is here to stay in Carroll County. It’s got the most drilling permits of any county in Ohio. Everyday, it seems, more and more trucks hauling sand, water, and equipment crowd into the streets of the county seat, Carollton.

It’s music to the ears of Amy Rutledge. She’s the director of the county’s Chamber of Commerce and visitors bureau. It’s been good for her, personally - she was working part time before the drilling started in 2011. Now she’s full time.

RUTLEDGE: You see hope in people’s eyes again, where it had gotten pretty depressed around here.

FRAZIER: Rutledge has seen the small Amish community grow since it started coming here in the 1980s. Many had come from Geauga County, east of Cleveland, which had experienced rapid growth in that decade.

RUTLEDGE: So they’re moving to areas that are not quite as built up.

FRAZIER: But in a twist of irony, these areas are now on top of some of the most lucrative rock formations in the East. One nearby well produced 30 million dollars in oil and gas. To capture this bounty, companies like Chesapeake use hydraulic fracturing, or fracking. This is a process in which millions of gallons of pressurized water, sand and chemicals are forced down a well to break up the fuel-rich rock.

This is a 24-7 industrial process in which thousands of trucks are needed to bring one well into production. It has been linked with groundwater contamination and methane migration in some states, though the industry says that if it’s done right, it’s safe. Fracking might seem at odds with Amish life. The Amish came to America beginning in the 18th century, and they abstain from some of the technologies that Americans take for granted. But don’t judge them by their horse and buggy, says David McConnell. He’s an anthropologist at Wooster College in Ohio who’s studied local Amish communities.

MCCONNELL: We tend to idealize the Amish and see them as all natural and organic.

FRAZIER: But that’s just not the case.

MCCONNELL: They are not Luddites, they are not stuck in the past with respect to technology use. The Amish believe that any decision about technology needs to be balanced with a discussion about the impacts of those technologies on community life.

FRAZIER: And sometimes that means embracing new technologies. That’s why some Amish choose to plant genetically modified crops, and use pesticides. Amish generally don’t feel a need to preserve the environment for the environment’s sake, either. McConnell says this can be traced to a basic tenet of Amish life - religion.

MCCONNELL: Most Amish would believe in a literal view of Genesis, they would believe that the earth was made by God and that humans have dominion over the earth.

FRAZIER: And that the earth is there for the benefit of humans, to use as they see fit. At the same time, McConnell says, this dominion requires the Amish to be good stewards of the land. Many Amish are aware of the environmental debates over fracking, but so far there have been no reported cases of contamination in Carroll County.

[VOICE OF AUCTIONEER AT WORK]

FRAZIER: At the Carroll County auction, Amish farmers mingle around huge stacks of hay that are getting sold off. The Amish here have almost all leased their land to oil and gas drillers. A young Amish carpenter says his father-in-law built a new barn with his lease money.

I ask one Amish man if he’s worried at all about his water. He says, “You worry about water. But what are we going to do about it?” He’d leased his land to Chesapeake, and said he would take the company at its word - that if anything happened to his well, the company would come back in and fix it, or provide him with additional sources of water.

Among those milling about the auction was Kathy Garczyk.

GARCZYK: Well, I came to look at hay and I love to buy baby calves.

FRAZIER: She’s English...that’s how the Amish refer to those outside their community. She lives in the nearby town of Scio. She works at a grocery store, and has been able to live a little more comfortably because of leases on her land. In conversations with her Amish neighbors, she’s learned that oil and gas money has helped them out too.

GARCZYK: They’re allowing this to go on because it benefits them too. They have bills just like we do and they’ve got mortgages and they’re paying their bills and farming with the money that they’ve received from the oil and gas business.”

FRAZIER: The Amish talk about not wanting to let the outside world in. That’s why they live the way they do. But to keep that way of life, some are starting to let the energy industry, one very modern aspect of our outside world, onto their farms and into their communities. They are hoping it’s a good gamble to take.

CURWOOD: Reid's report came to us by way of the public radio program, The Allegheny Front.

Mother Jones report on fracking and the Amish