Pink Salmon In Trouble on the White River 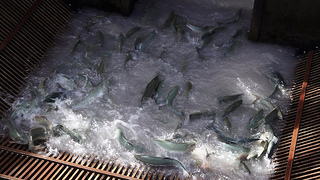 The fish trap at Buckley Dam has not been updated since the 1940s. With the massive influx of pink salmon, managers can’t separate out the endangered chinook,steelhead and bulltrout from the pinks. (Resource Media)

In the Pacific north-west, stocks of pink salmon have rebounded strongly. But on the White River, thanks to tight federal budgets, many fish get stuck at an old dam, and are dying in the attempt. From the public media collaborative EarthFix, Ashley Ahearn reports.

CURWOOD: The National Academy of Sciences just released a report detailing the results of federal efforts to rebuild depleted fish stocks - and found mixed results. But in the Pacific Northwest, scientists have seen a considerable recovery of stocks of pink salmon. Just now hundreds of thousands of pink salmon are swimming back to spawn in the rivers and streams there, but it's not always a happy outcome for many fish that choose the White River east of Tacoma. Thousands of them are dying, due to an outdated dam, and the inability of federal officials to transport the salmon round the obstacle to safe spawning grounds upriver. From the public media collaborative EarthFix, Ashley Ahearn has the story.

AHEARN: If you follow the Puyallup river inland from Commencement Bay and hang a left up the White River, you will eventually come to the Buckley diversion dam. It's a small dam, only about 15 feet high, but it's very old and very dangerous for fish. Russ Ladley stands in the shallows below the dam with a haunted look in his eye. He's a fisheries biologist with the Puyallup Indian Tribe. Pink salmon carcasses litter the rocks around his feet. He nudges one with his boot.

LADLEY: This is a female, right here. Full of eggs.

AHEARN: The silty waters writhe with fish, still fighting. Some of them are visibly battered and lethargic. Others continue to heave themselves onto the lower section of the dam‚ their bodies scraping over old exposed nails.

LADLEY: But yeah, this goes on 24 hours a day, 7 days a week until the fish are just depleted of all their energy reserves, then the current and the color of the water hides the bodies and they will be scattered downstream. 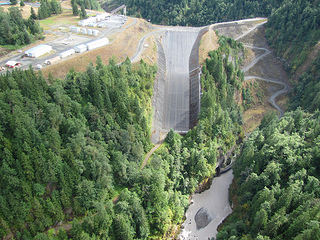 AHEARN: Ladley estimates that up to 200,000 fish will die here in the next month, during the height of the pink salmon run. There is no hydropower being generated at this small dam. The Army Corps traps fish here and then loads them into trucks and drives them around a much larger dam 6 miles upriver.

That dam was built in the early 1940s for flood protection, without any way for fish to get around it. The recovery of salmon in this river depends on their ability to get above these dams to spawn.

But the Buckley dam hasn't been updated since the 40s and the fish kills have gotten worse in the last decade as pink salmon have started coming up the White River by the hundreds of thousands.

Scientists aren't exactly sure why these fish are rebounding in Puget Sound, as other types of salmon suffer, but Russ Ladley says this old trap and haul facility can't handle all the pink salmon, nor can it sort out the endangered Chinook, steelhead and bull trout that also come up this river.

LADLEY: It is no longer effective. These pink runs have come out of nowhere and they've overwhelmed the system. There are more fish here now than the Corps can effectively move.

AHEARN: 12 miles upriver from where Russ Ladley was standing, a truck backs up to a long metal chute and opens its rear hatch.

AHEARN: These fish were trapped down at the Buckley Dam. Now they're being released into the upper reaches of the White River, free to spawn anywhere from here up to the foothills of Mt. Rainier. It's a critical part of their lifecycle.

The Army Corps spends an extra 600,000 dollars moving the massive influx of pink salmon around these dams. They've added 4 more fish trucks that operate around the clock. That's allowed them to move up to 20,000 fish a day but the tribes estimate there are more than double that arriving right now.

GOETZ: We're at our capacity. If there are more we're going to do our best to move that backlog.

AHEARN: Fred Goetz is a biologist with the Army Corps of Engineers. He acknowledges that the trap and haul facility isn't up to the task of moving all the fish that get stuck below the dam.

Fully replacing the Buckley Dam would cost close to 80 million dollars. Goetz says the Corps doesn't have that kind of money right now. Instead it hopes to spend about half that amount and replace the old dam, but not improve the fish trap there.

GOETZ: We're doing everything we can right now, especially when we don't have a lot of funding and we may not see very much in the future as well.

AHEARN: The Muckleshoot and Puyallup tribes say replacing the dam isn't enough. The old fish trap also needs to be replaced. That way the tribes can focus recovery efforts on endangered Chinook and bull trout that get mixed in with the hundreds of thousands of pink salmon in the river.

Don Gerry is a member of the Muckleshoot tribe and serves on the tribal fish commission. He's standing next to the Buckley dam, where salmon are dying as they wait to be transported upriver.

GERRY: We need to take care of them, and the federal government isn't doing their part. They're the ones that caused the problems with the decline of the salmon. We're left with the burden of trying to rebuild it.

AHEARN: The Army Corps expects that it could take up to 8 years for this dam to be replaced, and right now they're not planning on building a new fish trap.

CURWOOD: Ashley reports for the Pacific Northwest public media collaborative, EarthFix. There are photos and video at our website LOE.org.