Why Fish Have Different Amounts of Mercury 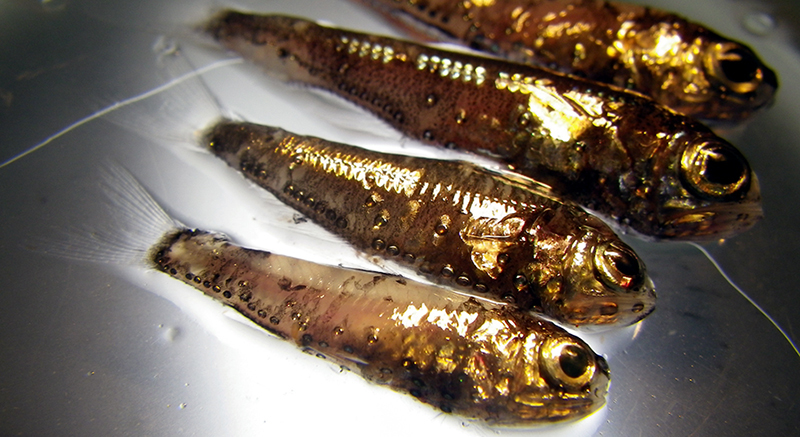 Lanternfish, the deepest of the species measured, bioluminesce on their undersides for camouflage. To deeper sea predators, the lanternfish blends in with the sunlight scattering through the shallower ocean waters. (Photo: C. Anela Choy)

Deep sea fish tend to accumulate more mercury than those that swim in shallower waters. A recent study from the University of Michigan explains that sunlight plays a major role in detoxifying the mercury found in fish tissue. Lead author Joel Blum joins host Steve Curwood to discuss how he traced mercury from the atmosphere into Pacific fish.

CURWOOD: Now eating fish can be beneficial to your health, as long as the fish you choose isn't laced with contaminants such as mercury. The body can metabolize small amounts of mercury, but too much is toxic to the brain and nervous system, and children and fetuses are most vulnerable. For years, scientists have noticed that deep sea fish contain more mercury than fish from shallower waters. Now, a paper published in Nature Geoscience explains why different fish have different amounts of mercury. Joel Blum is a professor of geochemistry at the University of Michigan, and co-author of the paper. Welcome to Living on Earth.

BLUM: Well thank you. Great to be here. 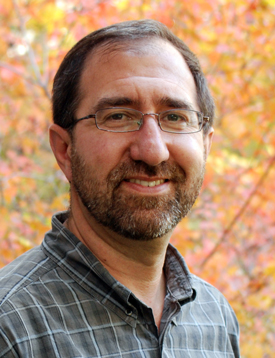 Joel Blum, geochemistry professor at the University of Michigan, studies how trace elements and toxic chemicals move from one source to the next. (Photo: Joel Blum).

CURWOOD: So, your most recent study was about the toxic mercury found in fish. What did you notice about the different fish found in your study?

BLUM: Well, prior to this particular study, a colleague of mine had noticed that the deeper the fish lived in the ocean, the higher the concentrations of mercury were in their tissues. So we wanted to understand why that was, and the study we’ve just done was focused on that problem. 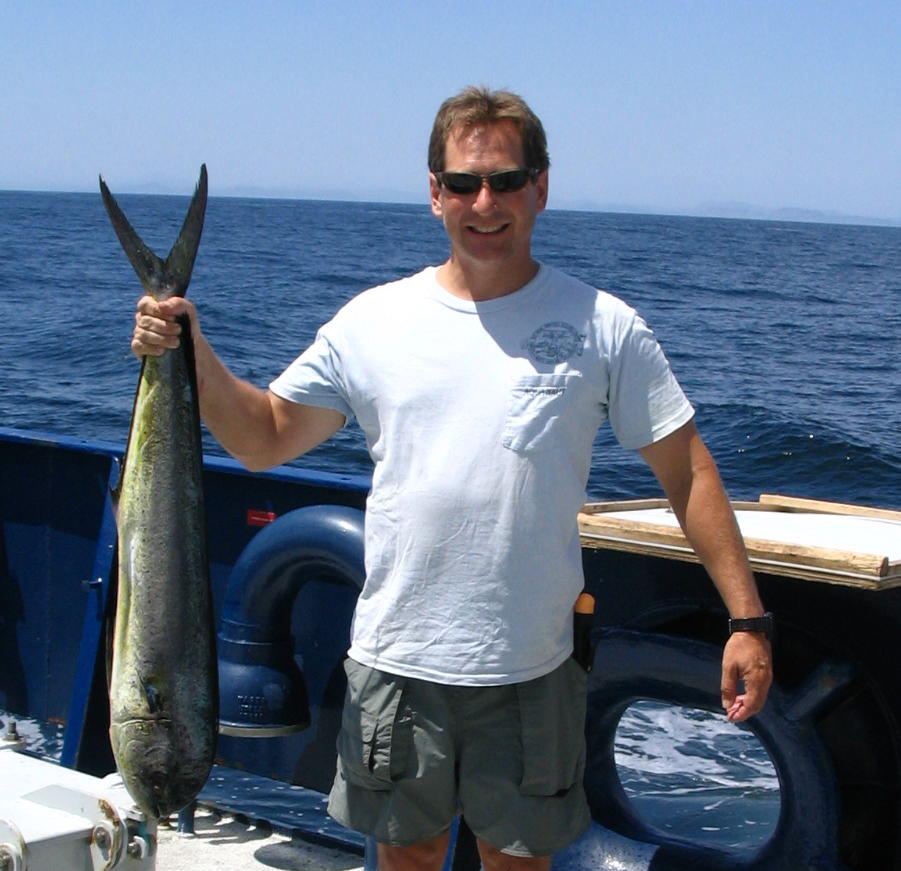 CURWOOD: So why is it that these fish have different amounts of mercury depending on deep they swim in the ocean?

BLUM: So the key to understanding mercury is that there are several different forms of mercury in the environment, and there’s one form that is taken up into fish and is most toxic, and that is called methyl mercury. And what we found in our study is that methyl mercury is formed in the ocean, in a variety of different depths in the ocean. But when it forms near the surface of the ocean, sunlight breaks down the methyl mercury back to its common form, and therefore essentially detoxifies it. But deeper in the ocean, where there is no sunlight, this process doesn’t take place, and so the toxic form of mercury can build up, and can be incorporated into the food web and ultimately into fish. 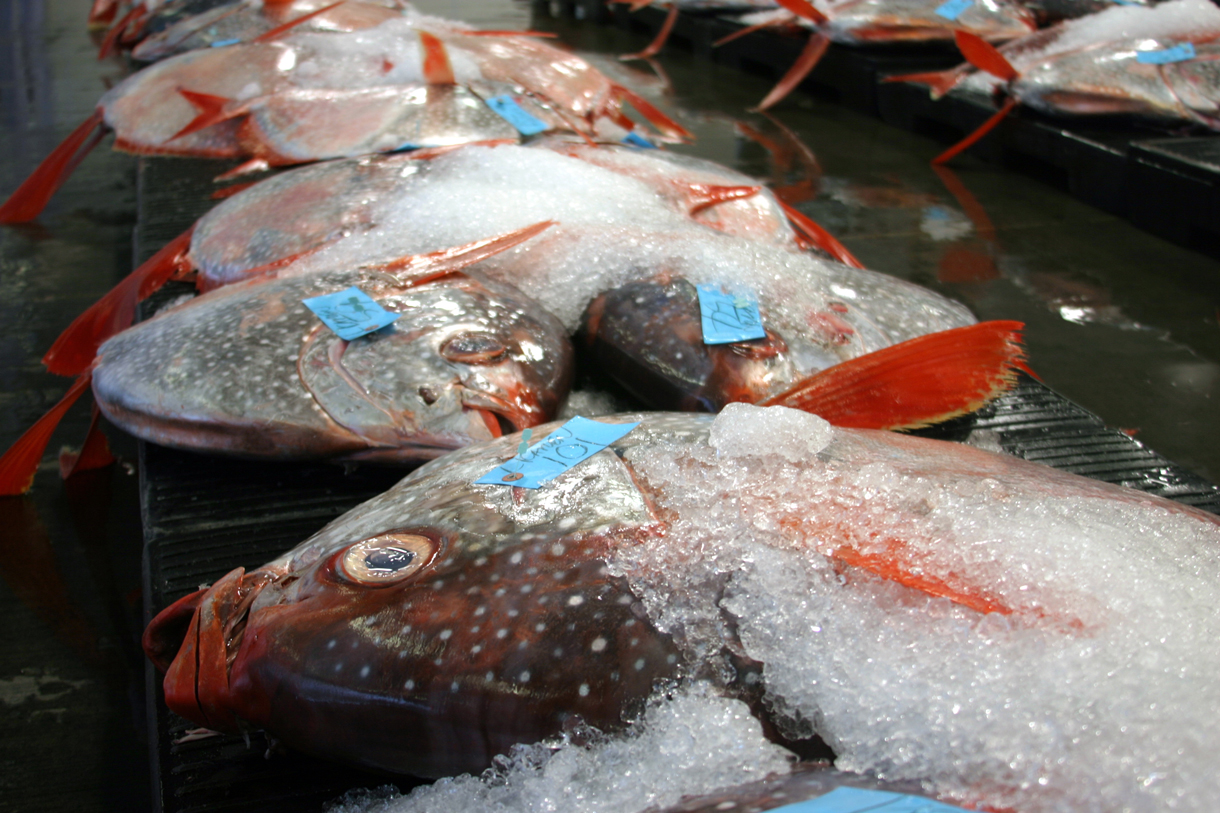 CURWOOD: So most of the mercury in the atmosphere is not this toxic methyl mercury. How does it get that way?

BLUM: The inorganic mercury that’s in the atmosphere is processed by bacteria, which turn it into methyl mercury. One of the things we found in our study is this processing, or this methylation, can happen in the open ocean, which we didn’t previously realize.

CURWOOD: How does the mercury affect the fish?

BLUM: As far as we know, the mercury doesn’t have a direct effect on the fishes’ behavior or health. At the levels, it’s found in fish, it certainly can affect humans who eat the fish, but the fish themselves don’t seem to be affected by the mercury.

CURWOOD: And these fish that you’ve done your research on are fish we’re likely to eat, right? 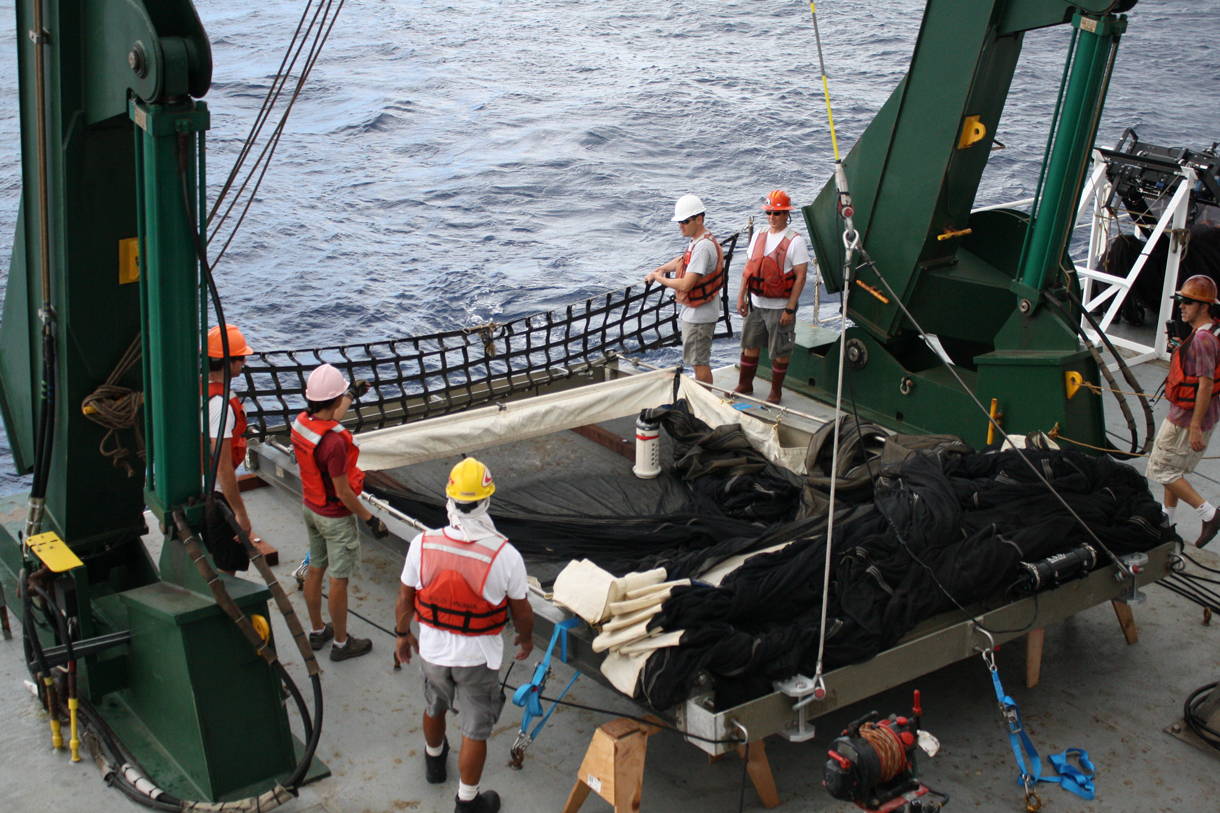 Researchers used a large net to catch the nine species of fish tested for mercury in the study. The net weighs 2000 pounds dry. (Photo: Jeff Drazen). 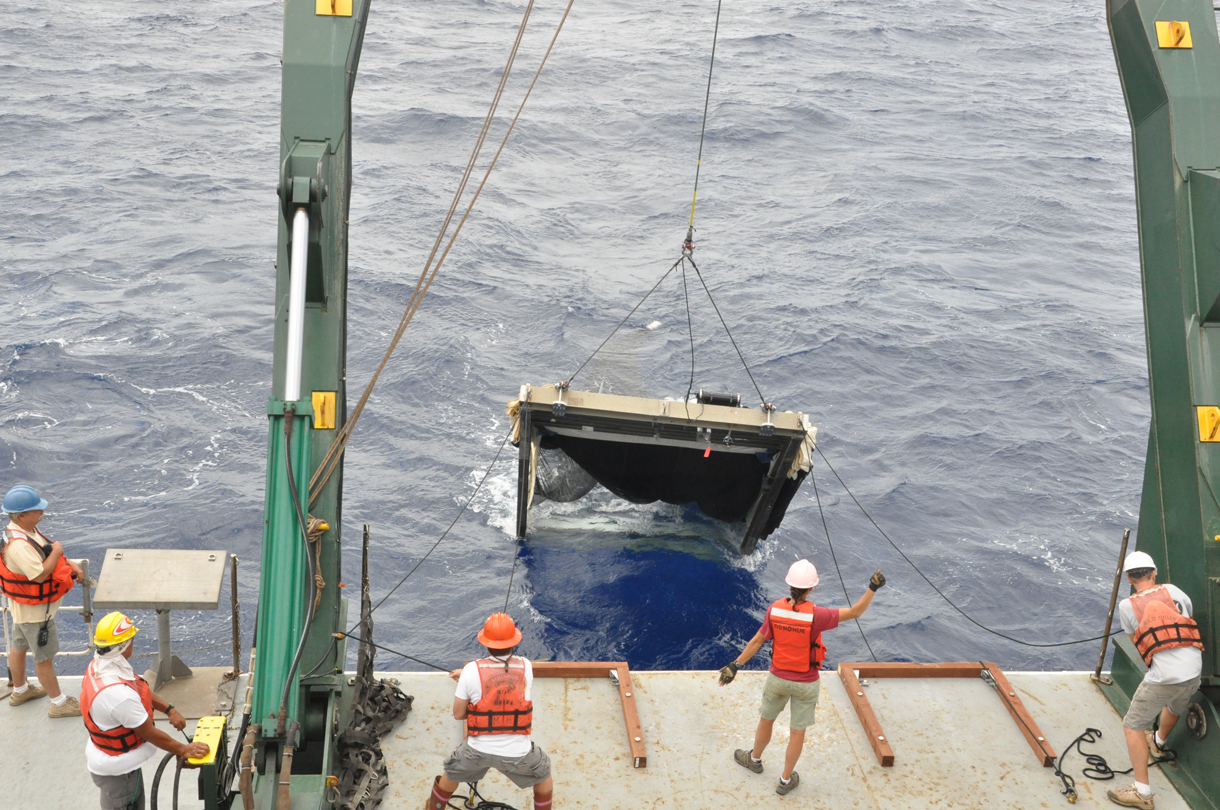 Marine Technician Meghan Donohue carefully directs the launch of the net. The net consists of different bundles that can be selectively opened to catch fish at specific depths. (Photo: Jeff Drazen).

BLUM: Yes, we looked at a whole range of fish. We looked at nine different species of fish, and among those are several different types of tuna, swordfish, a number of commonly eaten fish from the Pacific Ocean.

CURWOOD: You studied fish in the Pacific. How do mercury levels in the Atlantic fish compare to that?

CURWOOD: And that would be burning of coal then?

BLUM: Exactly. That’s the main source of mercury that’s coming to the atmosphere from Asia.

CURWOOD: So by the way, Joel, from your research, which fish were the most loaded with mercury? 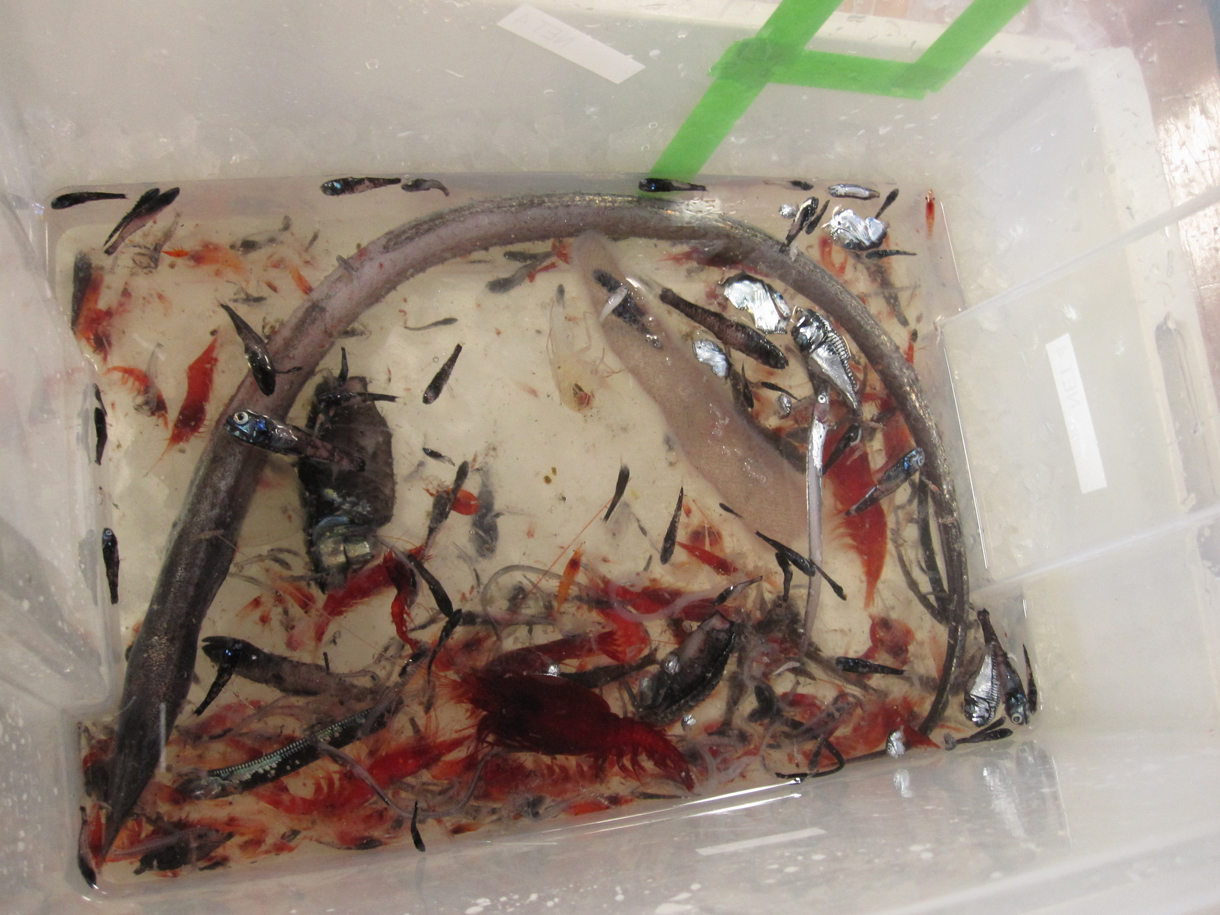 A typical haul from one of the nets consists of fin fish, jelly fish, pelagic eels, and crustaceans. (Photo: Jeff Drazen).

BLUM: The fish that had the highest level that we studied were swordfish. And swordfish are top predators, and they also live deep in the ocean, and that kind of double whammy gives you the highest levels, and those are fish that one really has to consider how much they eat because the exposure to mercury is really quite significant.

CURWOOD: What do you hope comes of this study, Joel?

BLUM: Well, what we’ve really done is improved our understanding of the whole cycle of mercury, of how it gets into the marine environment, how it becomes toxic and where it gets taken up in the food chain. And so by having a better understanding of this process, we hope that we can inform people about which fish should be avoided and which fish have lower levels of mercury and would be better choices for consumption.

CURWOOD: Joel Blum is a geochemistry professor at the University of Michigan who traces toxic metals through the environment. Joel, thanks for taking the time with me today.

BLUM: You're very welcome. It was a pleasure.


Details of the fish mercury study