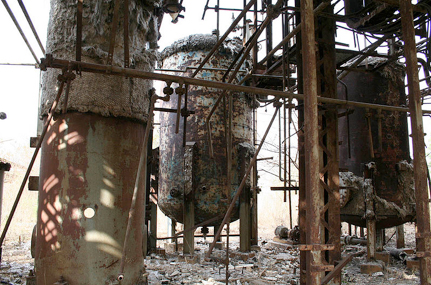 An explosion at a chemical fertilizer plant in West, Texas earlier this year killed 15 people and injured more than 150. Daniel Lathrop, a staff reporter for the Dallas Morning News, tells host Steve Curwood that no one really knows how often accidents like the one in Texas occur, because nobody's keeping track.

CURWOOD: It's Living on Earth, I'm Steve Curwood. On April 17, a chemical fertilizer plant in the town of West, Texas, blew up. The explosion killed 15 people, wounded over 150, and prompted nationwide questions about the hazards of chemical plants, particularly those that handle fertilizers. But when a team of reporters at the Dallas Morning News tried to find out how often accidents like the one in Texas occur, they discovered that no regulators are keeping track. Daniel Lathrop is a Staff Reporter and data specialist at the Dallas Morning News.

LATHROP: Initially we had a simple question, how often do things like what happened in West happen elsewhere? What have been the warnings leading up to it? How could this have been prevented? What do we know? And so the most basic question of that was how often has this happened before? And we couldn’t find out. And we talked to agencies, and we gathered data, and we increasingly realized that no one knew.

CURWOOD: So is there any government agency at any level that’s tasked specifically with collection and analysis of data of chemical storage or processing facilities?

LATHROP: No. No, there isn’t, which seems shocking, but it’s split between OSHA, the EPA, the Department of Homeland Security, state agencies of various kinds, and often simply left in the hands of local fire marshals and local fire departments. 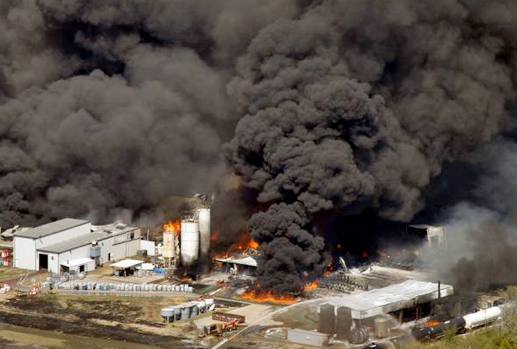 Noxious smoke billowing from the Magnablend chemical plant in Waxahachie, TX, prompted the evacuation of nearby neighborhoods and schools in October 2011. (Dallas Morning News)

CURWOOD: So do potential regulators of companies want to know what’s going on?

LATHROP: We had trouble answering that question. The environmental groups that we asked suggested that it’s pressure from industry, other experts that we’ve talked to have said that industry certainly has no interest in promoting this, but hasn’t necessarily opposed it either. One of the things an EPA official who’d been involved in that effort in the mid-1980s said was essentially different people come in, they lose interest in what somebody else was doing and it’s not necessarily their priority.

CURWOOD: Well, back in 1986, the Emergency Planning and Community Right to Know Act was passed in the wake of a huge chemical disaster that killed thousands of people in Bhopal, India, when a Union-Carbide plant exploded. And that legislation, as I understand it, requires companies to disclose information about dangerous chemicals that they store, and to calculate worst case scenarios so that nearby communities can plan for disaster. That law’s on the books. What’s happening with it?

LATHROP: Well, since then there’s been a lot of rollbacks. There’s been a concerted effort from a variety of sources to make that information hard to get, hard to access. There’s no real data verification or confirmation that goes on with any of what gets reported. Most of it is reported only to state agencies, and again, a state agency here in Texas told us, well, we collect it, but we don’t have the authority to do anything with it.

CURWOOD: One of the things that we found that was interesting about the Emergency Planning and Right to Know Act is that only certain chemicals are regulated under that, and the list doesn’t include fertilizer, the ammonium nitrate that blew up at the West fertilizer company.

LATHROP: Yes, in fact, the ammonium nitrate in federal law and regulation has a very special status, it’s one of a small number of chemicals that not just isn’t regulated, but has special sort of anti-regulatory status where the EPA is prevented from regulating it under some circumstances. For example, it’s illegal for federal and state and environmental agencies to regulate ammonium nitrate when it is for direct sale to the consumer, in this case, generally farmers. So ammonium nitrate fertilizer, like the kind that was mixed and sold at West, is, in fact, not required to be dealt with under EPCRA, if it is for direct sale to consumers. In the case of West, they chose to disclose it anyway. It’s not clear to us whether they actually had to.

CURWOOD: Now ammonium nitrate, of course, it’s a fertilizer, but famously it’s quite explosive. Oklahoma City bombers, for example, used it. Seems kind of amazing that there’s no record being kept of where the stuff is stored or what’s happened in terms of accidents.

LATHROP: It is amazing. We can’t understand why this particular chemical has sort of had regulatory cryptonite. There have been major disasters involving this, either deliberate terrorist attacks or major accidents that have happened - quite a few going back 70 years in the United States.

CURWOOD: In your story, you wrote, I believe you quoted Sam Mammon, he’s a nationally recognized chemical safety expert, who told you, “We can track the Gross National Product to the second and third decimal, but there’s no reliable way of tracking simple things like how many chemical accidents happen.” He recently testified on Capitol Hill. What appetite do you detect in Washington to take on this issue?

LATHROP: We’ve detected no appetite in Washington to take on this issue. It’s a kind of boring issue. It’s something as simple as knowing what has happened so that you can make intelligent decisions about it. In the mid-80s the EPA took a stab at this. They created a pilot program to track these, and that was basically not very successful and not renewed afterwards.

CURWOOD: You said this is boring, but the disaster in West, Texas, was far from boring.

LATHROP: I agree. I think it’s incredibly important. I don’t think we can make good decisions as a public. I don’t think that we can set proper regulations on companies. I don’t think that we can make any real decisions if we don’t know what it is that we’re making decisions about. The things that are not being collected as data are frequently horrifying accidents that kill people, that maim people, that destroy property, that lead to neighborhoods and cities being evacuated. But no one in Washington wants to talk about how to keep track of it.

CURWOOD: Daniel Lathrop is a Staff Reporter and Data Specialist with the Dallas Morning News. Thanks for taking the time with me today, Dan.

LATHROP: Pleasure to be here, Steve.

Explosions: How They Work