Alaska’s Pebble Mine Loses a Partner 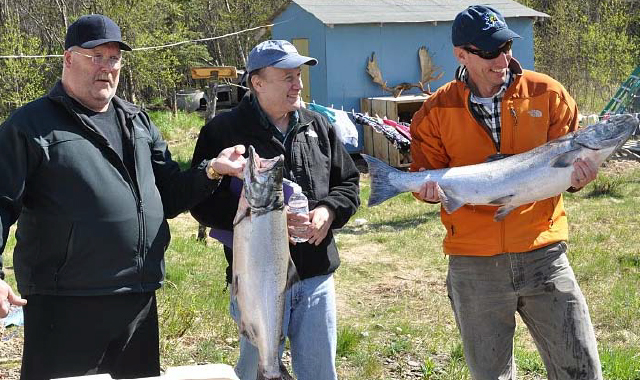 Mining giant Anglo American has pulled out of a partnership to develop the massive Pebble Mine in Southeast Alaska. Conservation groups are pleased, as the mine would stand at the headwaters of the most productive salmon run in the country. But the mine could produce some $300 billion worth of minerals, so Mike Mason, news director at KDLG in Bristol Bay, Alaska tells host Steve Curwood the proposal may not be dead.

CURWOOD: The proposed Pebble Mine in Southeast Alaska would be located at the headwaters of some of the most productive salmon rivers in the world. The potential threat there prompted conservation groups, fishermen, and native tribes to oppose the mine. And recently, the international mining giant Anglo American decided to pull out of the partnership to develop the site.

But as the mine could produce some $300 billion worth of minerals including gold and copper, Mike Mason, the news director at public radio station KDLG in Bristol Bay, says that might not be the end of the story. It's a classic case of the riches of mining versus the riches of nature.

MASON: Well it is basically a very pristine environment. There’s very little population up there, and it is basically at the headwaters of the Bristol Bay drainages, or at least two of the major drainages, the Nushagak and Kvichak river drainages, which are two of the largest salmon producing rivers on Earth and definitely very vital to the environment here in Bristol Bay, and the mine potentially would be located just north of Lake Iliamna which is considered the largest salmon producing lake on Earth. 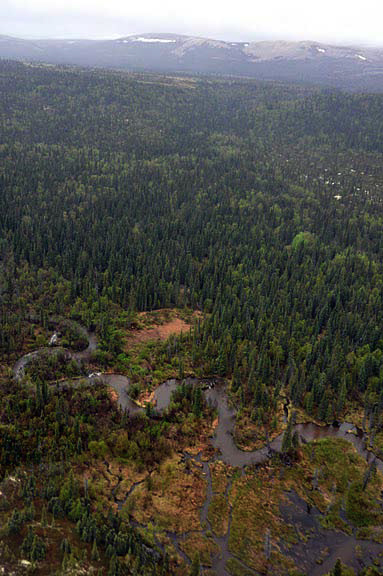 Upper Talarik Creek near the proposed Pebble Mine. (David Allnutt, US EPA Region 10)

CURWOOD: Describe the proposed mine for me. They call it Pebble Mine, but I don’t think they’re mining pebbles! And tell me about the concerns locally about the possible environmental impact.

MASON: Well, perhaps we should start on what we don’t know, and what we don’t know is the size and the scope of the proposed mine. Many people believe that it would be massive, likely the largest mine in Alaska, and likely one of the largest mines in North America. The plan potentially would include a massive open pit, but like I said, much of that is unknown because the developer, now Northern Dynasty Minerals, has not released a mine plan, nor have they filed for the necessary permits that would start the NEPA [National Environmental Protection Act] permitting process.

So what we know is a little bit, but we don’t know the full scope of it. We were hoping we would get the mine plan later this year, and with the goal they were saying of potentially going into permitting by the end of this year or early next year, but all of that appears to be on hold with the recent decision by Anglo American to pull out of the project.

CURWOOD: Now, why did the mining company decide to pull out of this project?

MASON: Well, that’s the big question. They were undergoing a review of all of the projects that were basically in their pipeline, and Anglo American is a mining giant worldwide - they’ve got projects all over the world - and they did an assessment of all their projects as part of their budget process and they came up with the decision that basically there were other projects it seemed like that were further along in development and would not be as risky as this project. So they basically looked like they cut their losses, and walked away from it. Looks like they invested about $500 million so far, and it’s anticipated the company’s going to take a loss of another $300 million to get out of the Pebble Limited Partnership that was formed in 2007 between Anglo American and now the lone company involved here, Northern Dynasty Minerals.

CURWOOD: I gather that Northern Dynasty really doesn’t have that much experience in terms of mining on a scale like this. What are their plans going forward? Who might be the potential partners?

MASON: Well, that also is another big question mark. Northern Dynasty Minerals itself has never itself done a mine. One of the obvious potential partners is the giant mining company Rio Tinto, which owns basically nearly a 20 percent stake in Northern Dynasty Minerals, however Rio Tinto has said repeatedly that they will only support the project if it were developed using underground mining techniques instead of utilizing an open pit.

It looks like to many people that Northern Dynasty Minerals are basically trying to shop this around to another mining company, or perhaps a partnership of several mining companies or smelting companies. They held a conference call, I believe it was the day of the Anglo American announcement, and one of the questions that was posed near the end of that conference call was about interest from overseas investors, like the Chinese, and the person that was leading the conference call, the CEO of Northern Dynasty Minerals confirmed that over the years they have had conversations with several Chinese mining companies, and that is very concerning to a lot of people here in the region just based on some of the environmental records of some of the Chinese companies, and the fact that a very aggressive new company could come in here and kind of revitalize this project that many people celebrated as left for dead when Anglo American pulled out on September 16.

CURWOOD: Now I understand that this project is also at risk from the review by the Environmental Protection Agency. Can you tell me about that?

MASON: That’s one of the most fascinating aspects of this. Back in 2010, a number of tribal entities here in the Bristol Bay region and some other opponents basically went to the EPA and asked them to use their 404(c) veto authority under the Clean Water Act to prevent the issuance of necessary permits that would allow this mine to go forward with development. The catch is that the tribal entities and many of the others are asking the EPA to step in preemptively and use that veto authority before the issuance of permits, before we go into the NEPA permitting process, before we write the EIS [Environmental Impact Statement] and all of that, and that has never been done before.

There is some thought here in the region that allowing the EPA to step in and use that veto authority could be a legacy move by President Obama, in the last couple of years of his term is basically to allow the EPA to set this precedent, preemptively come in and veto this project in this very sensitive area, and that that would be kind of a nice legacy move by President Obama. Many people do not believe that is going to happen next year because our junior senator is up for election. He’s a Democrat in a very Republican state. Many people believe that they would not make this move until after the midterm elections to kind of protect Senator Mark Begich from some of the fallout if such a move were made.

CURWOOD: Is there a political divide over this or are Alaskans on a bipartisan basis very concerned about this?

MASON: The project is widely unpopular here in the Bristol Bay region, and especially where I am in Dillingham which sits along the Nushagak River. Some recent polling done by the regional native corporation put the opposition 80 percent or more. It’s believed that it is also opposed by a very large percent of the population in the state of Alaska, though if you know anything about Alaska, it is a resource development state. There’s a large number of people that believe in oil and gas and mining as well, and the state of Alaska seems to be committed to allowing this project to go through the permitting process, to see if it can actually be done and meet all of the standards out there, and since the mining plains are on state land, there is the thought out there that the state of Alaska, wanting this to go forward, or at least into the permitting phase, it actually could happen at some point.

CURWOOD: Mike Mason is the news director at KDLG, that’s the public radio station in Alaska’s Bristol Bay. Mike, thanks for taking the time with us today.

MASON: Thank you so much.