Counting Down the Planet 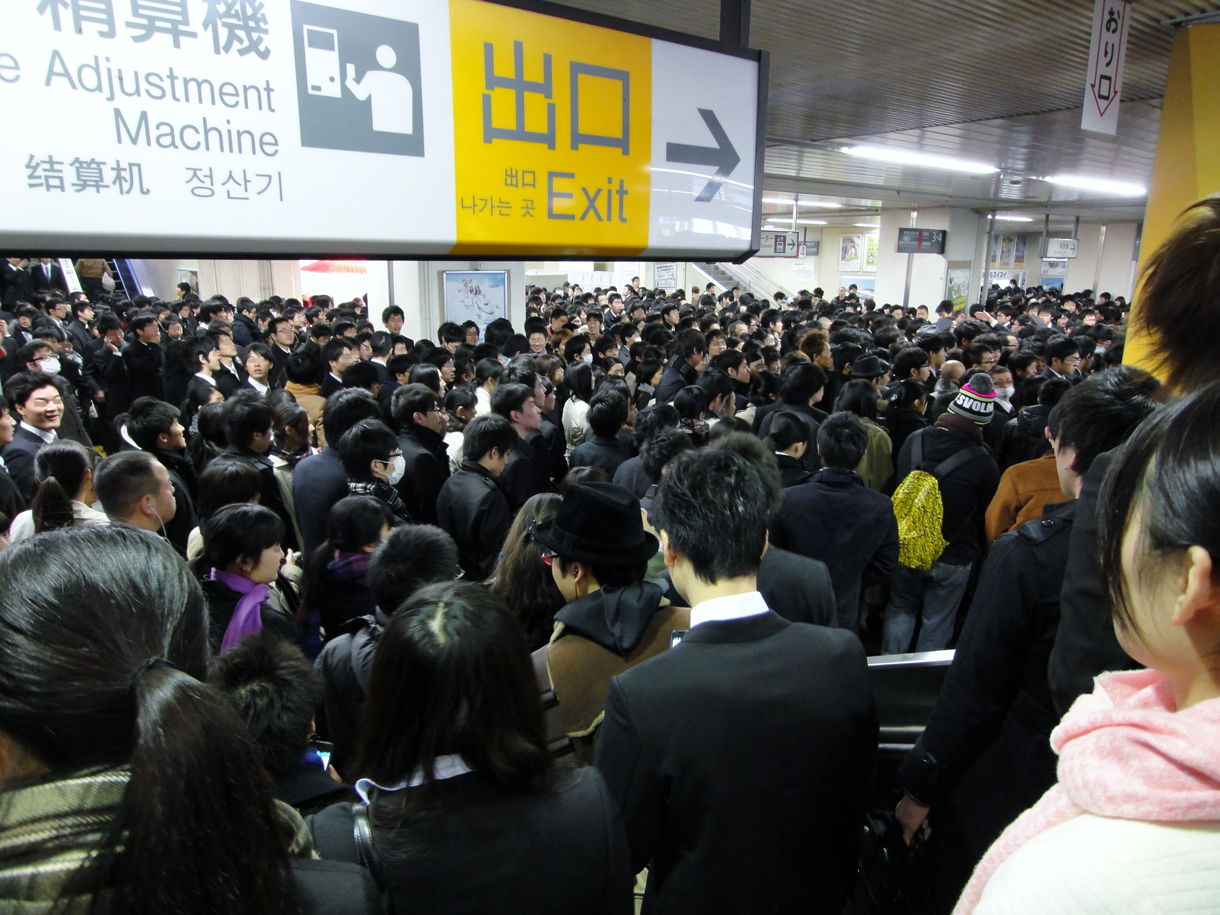 Rush hour in Tokyo. Despite its densely populated cities, Japan’s population is decreasing, forcing it to consider how to design an economy around shrinking, rather than growth. (Photo: Dick Johnson)

Alan Weisman’s bestselling book The World Without Us imagined our world if humans suddenly vanished from the planet. Weisman’s new book, Countdown, looks at an opposite reality; the earth with potentially far too many of us. Host Steve Curwood discusses the new book and the hot-button issue of reducing population with Alan Weisman.

CURWOOD: Author Alan Weisman’s last book, the bestseller ‘The World Without Us’, imagines what the world might be like if there were no humans. Well, his new book, ‘Countdown’, examines a vastly different reality - a world with what might be way too many humans. Those seem like two dark futures, so we called him up to ask him about this latest work. Alan, welcome back to Living on Earth.

WEISMAN: Thanks, Steve, it's great to be back.

CURWOOD: Alan, your previous book, ‘The World Without Us’, was, well, let’s face it, very dark. How fair is it to characterize this work as hopeful?

WEISMAN: Well, Steve, I didn’t consider ‘The World Without Us’ as dark. To me, it was very hopeful to realize that nothing that we do to this planet ultimately is going to harm it. In this book, I really show a way, that we can continue to have a world with us, that gradually, not coercively, we can bring our numbers back down to a much more reasonable balance with the rest of nature, we can curb the amount of people who are emitting carbon into the atmosphere. 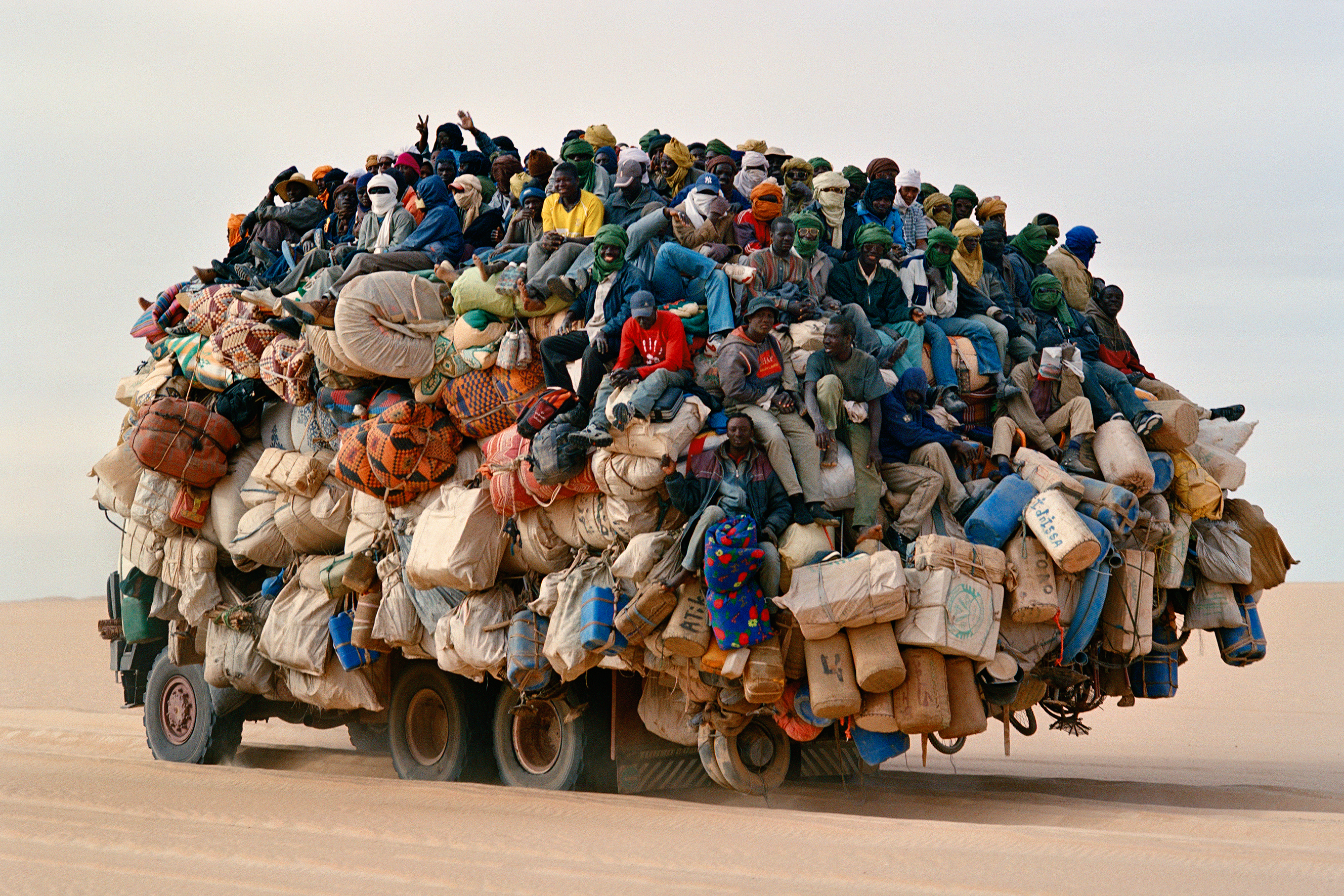 Transport in the Sahel, Africa. Population is growing quickly in this impoverished region of Africa, and rural subsistence farmers are increasingly migrating to cities. (Photo: Roberto Neumiller)

That’s really one of the most hopeful things we can possibly be doing right now. Plus, it doesn’t cost very much. We could provide contraception worldwide for everybody for the same amount every year, about $8.5 billion, that your country and mine was spending in Iraq and Afghanistan every month.

CURWOOD: At one point, you outline four questions in the book as the most important questions on earth. One of the four questions you investigate is what is the planet’s carrying capacity? Can you speak to that for me please?

WEISMAN: Well, a lot of experts who have kind of made a stab at what might be a reasonable number for us, some of them have looked at energy, trying to figure out how much carbon the atmosphere really can bear. Divide all that stuff up, and you start coming out with numbers in the two to three billion range. It turns out that it’s hard to know exactly what the optimum number is because we’re at the number that we’re at right now.

CURWOOD: Which is about seven billionish or so.

WEISMAN: It’s about 7.2 billion right now, and it’s one of these things that sort of creeps up on us gradually, you know, every few days, there’s a million more, and you don’t really notice until suddenly you turn around, you say, “Oh my God, there’s all this carbon dioxide in the air. Look what it’s starting to do.”

CUTWOOD: The first question’s about the Earth’s carrying capacity. Tell us about the other three and just briefly sum up the answer for each.

WEISMAN: The second one, the converse, is how much nature do we need? Are there any species that are absolutely essential? And the answer to that one turns out to be, we really won’t know until it’s too late if we push something off the planet that, “Ooops. We probably should have saved that.” You don’t notice that one species is gone. You don’t notice that a second species is gone. Suddenly, when there are a thousand species gone then we start to have a real problem.

CURWOOD: So that’s the second question - what’s the third question? 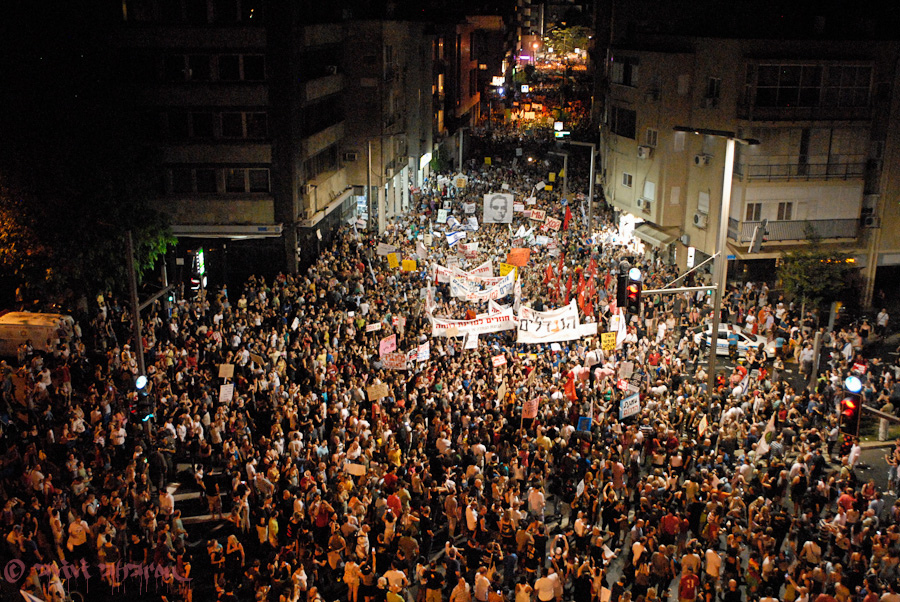 Crowds of demonstrators protest housing shortage in Tel Aviv in August 2011. Parts of Israel are some of the most densely populated regions on Earth, and growing. (Photo: Avivi Aharon)

WEISMAN: The third question was, OK suppose we could determine what would be an optimum population, or we decided at least the 7.2 billion that we have right now is just way too many because we’re really bursting at the seams. Would the great range of the world’s cultures and religions and nationalities embrace the idea that this would be in their self interests? And if the Chinese draconian policy is not going to fly almost anywhere else.

So I ended up going to 21 countries for this book to sort of take the pulse of the world’s cultures, and to see if there is something in their histories, and it turns out I found something everywhere. I was in lots of Muslim countries, I was in the Vatican, I was in Israel, and here’s one example.

Let’s go back to Genesis, there is a charge to be fruitful and multiply and fill the Earth. But then you get to Joseph who was one of 13 children - you know the son of Jacob. He was very observant, and he realized that the world was moving into a cycle of scarcity. He had only one wife, he held himself to only two children, and he convinced the pharaoh of Egypt in that order to save his country that they literally had to refrain from embracing for a while to conserve. As a result, Egypt got through the famine.

CURWOOD: And the fourth question?

CURWOOD: Why is population control still such a reviled notion? Even with so many red flags that however you do the math the human population is outweighing the planet’s carrying capacity for humans?

WEISMAN: Well, making copies of ourselves is something that every organism on the planet does, it’s doing what comes naturally, and the idea of having to limit it is sort of an unnatural act. There is something instinctively reflexive that finds the idea of having to control that, or worse, being told what you have to control it utterly repellant. No species is created with an idea of limitations. You make not just copies of yourself, but you make extra copies of yourself and hope that some of them will survive.

The human race, like every other species, used to lose an awful lot of those extra copies. In the 19th century, we suddenly changed the game. We invented all kinds of medical advances, from vaccinations to eradication of pests, to pasteurization of milk, and then we came up with food technology that greatly increased the amount of plant life that the Earth could produce by itself. The fact is, we have really manipulated nature when it comes to human survival.

CURWOOD: Now why do you think it’s going to be easier to get a balance here by curbing births rather than using technology - cleaner energy or food, that sort of thing?

WEISMAN: The fact is, we’re not developing solar, wind and other kinds of clean technologies to the point where they can usurp the more conventional ways of producing energy.

CURWOOD: What about the prospect of consuming less?

WEISMAN: There’s also the question of consumption. Everybody says, “Well, if only we consumed less, then the world would be much better and cleaner and much more sustainable.” I think it was Paul Eherlich who said to me, “It’s a great idea, but I’ve never found a condom for consumption.” The quickest way we can deal with environmental issues right now is simply to curb the number of consumers who are pumping out all that carbon. 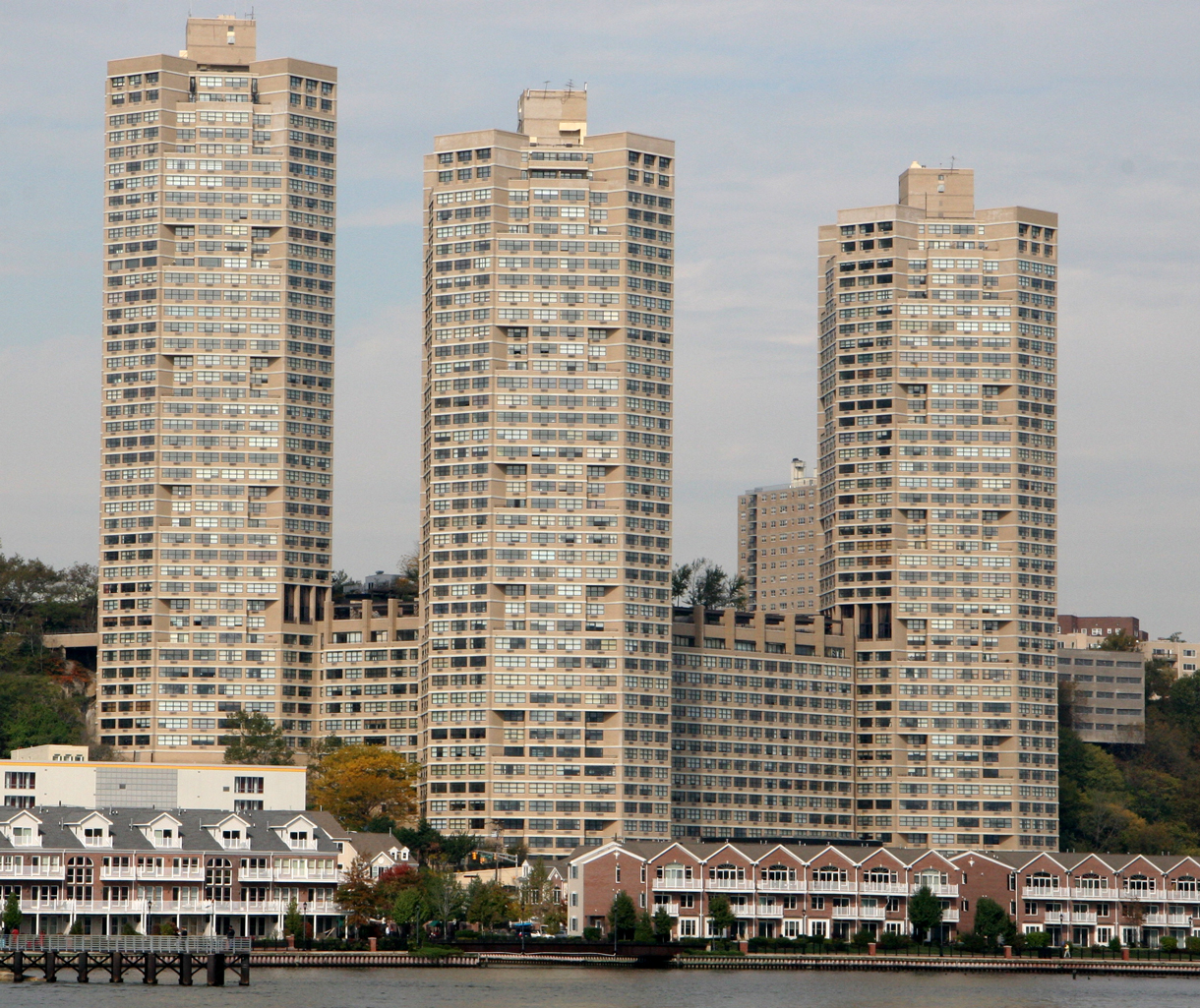 CURWOOD: If the Earth can’t hold the 10 billion we’re on track for, or for that matter, the seven billion we have now, how do you build an economy around a shrinking population?

WEISMAN: Well, one of the places I went to in this book is Japan which is the first country on Earth really that is facing the fact that its population is shrinking. At the end of World War II, they had to cut off their baby boom because people were starving. So they legalized abortion. This was before modern contraception, and that was the fastest way to do it, and as a result, they’re going to be back to their post World War II population by around the middle of this century, a little bit after.

I found a Japanese economist who’s been thinking about this a lot. His name is Akihito Matsutani. He says it’s really an opportunity for Japan to reorient itself. Instead of depending on heavy export industries that load people into these port cities, it’s going to be a time of lighter consumer industries - a cheaper place to live, labor will actually become very valuable.

CURWOOD: But Japan right now is in an economic funk! It had this great expansion in the 80s, but then it’s been in stagnation for almost two decades now.

WEISMAN: Well, Japan is kind of in denial over what it’s facing. But frankly, economic stagnation in Japan would look really good to most of the people on Earth. You still go to Japan and people are prosperous, people are living well. 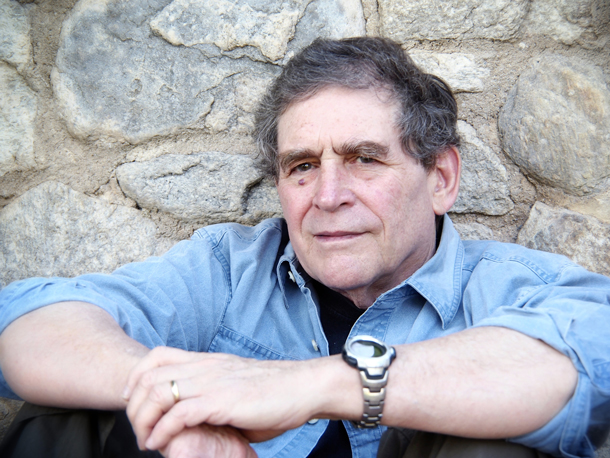 CURWOOD: Alan, this is a very thoughtful and almost exhaustive study of these questions. What do you hope comes out of your book?

WEISMAN: Well, there’s something inexpensive that is a win-win, or a triple or quadruple win situation for everybody that can help turn around population growth significantly in this century - encourage women to get educated. Turns out, education is the best contraceptive of all. A girl who gets into high school worldwide on the average is going to have two children. If she gets a degree, she’s going to delay her childbearing until her college is over. She’s going to have something very useful to both her family and her society. The idea that educating women can help solve this environmental problem, and at the same time bring equality. You know, population, as one of my sources explained to me, is where social science and natural science come together. Right now, they’re colliding. We can really make them mesh the way that everything in an ecosystem ought to do. 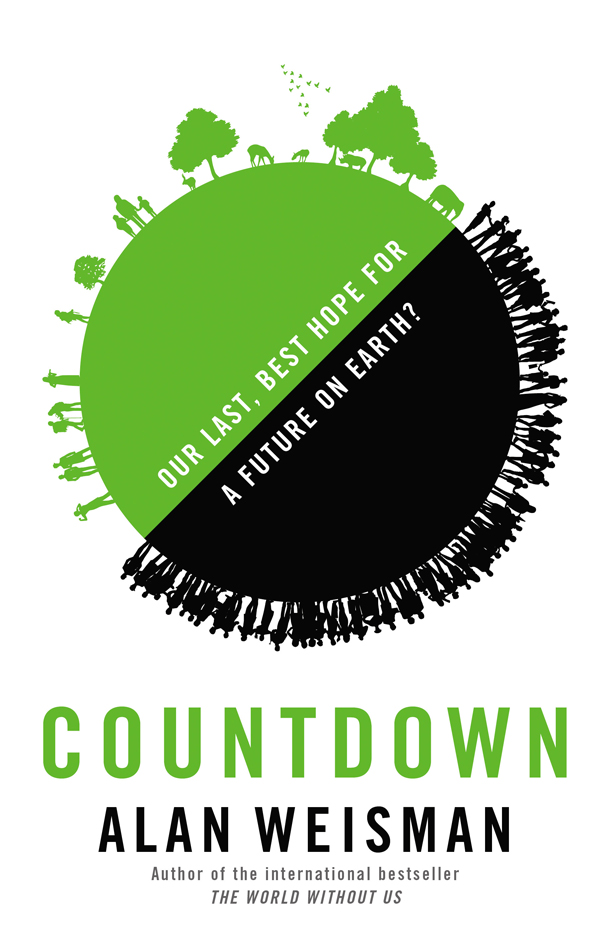 CURWOOD: Alan Weisman’s book ‘Countdown’ is out now from Little Brown. Alan, thanks so much for taking the time to talk with me today.

WEISMAN: You're welcome, Steve, it's been a pleasure.