Climate and the Health Risks of Urban Heat Islands 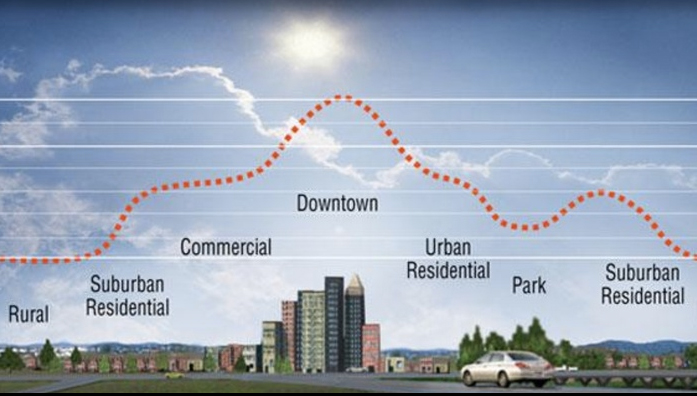 An urban heat island is a part of the city where dark pavement and rooftops absorb sunlight and make the air around them hotter than the air surrounding areas. (image: the Heat Island Group)

CURWOOD: As global warming kicks in, scientists predict hotter summers, and the risks from increasing temperatures are higher in places known as urban heat islands. Pavement and buildings in cities hold the heat and can make hot spells more hazardous to human health. From Portland, Oregon and the public broadcasting collaborative EarthFix, Cassandra Profita reports for our series, “Symptoms of Climate Change”.

STEPHENS: Oh, kitty you’ll have to get down. Come on. Shoo.

PROFITA: 74-year old HelenRuth Stephens lives with her cat Chessie in a public housing complex near downtown Portland. Her building is surrounded by a black asphalt parking lot and a dense network of city streets lined with more apartments. Traffic whirs by on highway 405, three blocks away.

STEPHENS: I live in what scientists call an urban heat island. It's a part of the city that soaks up more of the sun's heat because it has a lot of buildings, pavement and vehicle traffic.

PROFITA: That means when it gets hot outside, it's even hotter in her neighborhood. And for Stephens, hot weather makes it hard to breathe. 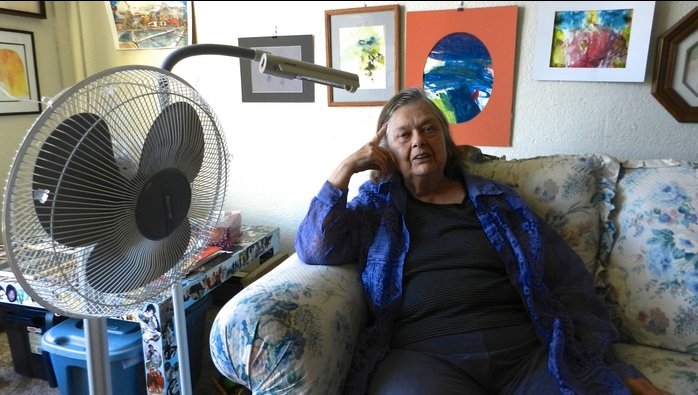 PROFITA: Stephens suffers from asthma and chronic obstructive pulmonary disease. Both affect her lungs. On hot days, she says, she doesn’t dare go outside. Not to get the mail or to take out the trash.

STEPHENS: You don't do it because you'll be breathless by the time you get back.

PROFITA: She’s the type of person public health officials worry about as they prepare for climate change. Climate models predict hotter summers and a higher likelihood of extreme heat events in the coming decades. And experts say that poses health risks – even in the milder climates of Oregon and Washington.

LUBER: Areas that don’t experience extreme heat are the ones that need to be thinking about it the most.

PROFITA: That’s George Luber, associate director of the climate change and health program at the Centers for Disease Control in Atlanta. Luber says climate models show cities like Portland and Seattle have every reason to prepare for hotter summers.

LUBER: While the Pacific Northwest doesn’t experience many extreme heat days, the potential of those are greatly increased – more so than other areas of the country.

PROFITA: The prospect of hotter summers has health officials taking a close look at urban heat islands. In Portland, studies show some parts of the city can get up to 9 degrees hotter than nearby rural areas. The heat alone poses health risks to the elderly, people with heart disease and diabetes. But it also creates another problem: It cooks air pollution into ground-level ozone, or smog.

DENNY: Ozone doesn’t do well with our lungs.

DENNY: When that sun mixes with all the soup of pollution in the community from being in an urban environment, what happens is you create this ozone, which is a bi-product. If you have asthma or emphysema, you will find it more difficult to breathe.

PROFITA: The way Denny sees it, urban heat islands are a double-whammy for people’s health. The hottest places in the city are also more polluted. Add climate change to the mix, and the health risks of heart attacks, strokes and asthma attacks are even higher.

DENNY: You will take a person who’s not that healthy to begin with and push them to where they require medications and hospitalization and push people who are healthy into developing conditions like asthma.

PROFITA: Denny’s agency is developing a plan for responding to the health risks of climate change. The plan uses census data and maps of Portland’s urban heat islands. Its goal is to pinpoint the people whose health is most vulnerable in hot weather. The maps show a big blue cool zone in Forest Park – the city’s 5,000-acre urban forest. And there’s a big red hot zone all through downtown Portland. 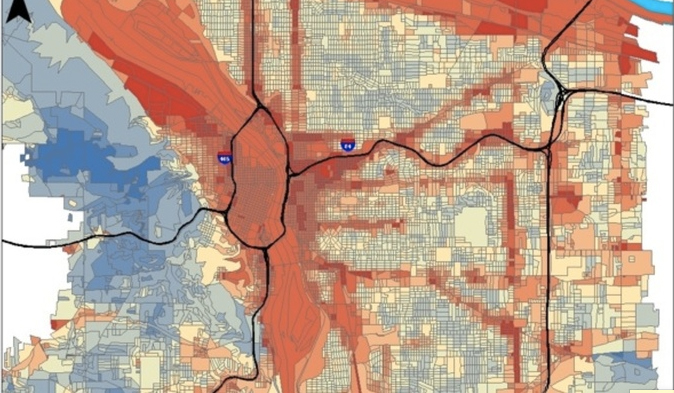 A heat island map of the Portland, Oregon metropolitan area shows summer temperatures are higher downtown and along major roadways than in the shadier areas such as the 5,100-acre Forest Park. (image: Multnomah County Health Department)

PROFITA: That’s Portland State University professor David Sailor. He developed those maps by taking detailed measurements of temperatures across the city during the summer months.

SAILOR: And then of course, one thing that’s impossible to miss in these figures is the fact that Forest Park stands out as what we call a cool island.

PROFITA: Cities across the country are looking for ways to cool down their urban heat islands. With climate change likely bringing warmer summers. They want to know how they can make downtown more like an urban forest. Can they reduce health risks simply by planting more trees? Portland State University researcher Vivek Shandas is working on an answer to that question.

PROFITA: He’s in a car with PhD student Meenakshi Rao. They’re on their way to Mount Tabor, one of Portland’s largest city parks. 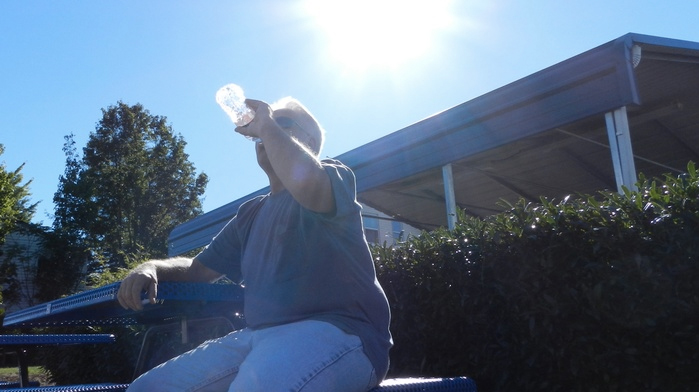 On a hot day in Portland, Oregon, Jack Sutton cools off while waiting for his car to be washed along 82nd Avenue. Research shows the area surrounding that major street is hotter and more polluted than other parts of the city (photo: Cassandra Profita)

SHANDAS: Take a right and an immediate left where that truck is turning.

PROFITA: Two weeks ago, they zip-tied 200 tiny air monitors to tree branches, street signs and telephone poles all over the Portland metro area.

PROFITA: Now they’re going back to collect them. To get the one on Mt. Tabor, they have to walk down a trail and into the trees.

SHANDAS: Oh, there it is. Should I pull the branch down?

RAO: OK, can you spot it? It’s on this big leaf maple.

PROFITA: But they’re measuring nitrogen oxide and nitrogen dioxide. Those are two common pollutants in cities that are also ingredients of ozone.

[CLIPPING SENSOR OFF THE TREE]

PROFITA: Shandas cuts the monitor off the branch and Rao puts it in a Ziplock bag. Later, she’ll take the device back to a lab. And she'll look to see how the air in a forested city park compares with the air in other city neighborhoods. Shandas says his research shows that places with more trees are cooler and have cleaner air. So trees seem like a good option for cities dealing with urban heat islands.

PROFITA: But even planting trees isn’t a simple fix. If you plant trees for shade and cooling in a canyon of downtown buildings, that actually trap air pollution from cars and trucks by reducing ventilation. So there are still a lot of questions about how many trees to plant and in what formation. Shandas says the new data they’re collecting in Portland should offer new insights.

PROFITA: One day, Shandas hopes to have a kind of recipe for what makes urban heat islands hotter and smoggier – and what ingredients could be added to cool them off and clean them up. Studies show that for some people, that recipe could be a life-saver as climate change turns up the heat. In Portland, I’m Cassandra Profita.

CURWOOD: Cassandra Profita reports for the public broadcasting collaborative EarthFix. For more, check out our website at LOE.org.