The Lessons of Superstorm Sandy 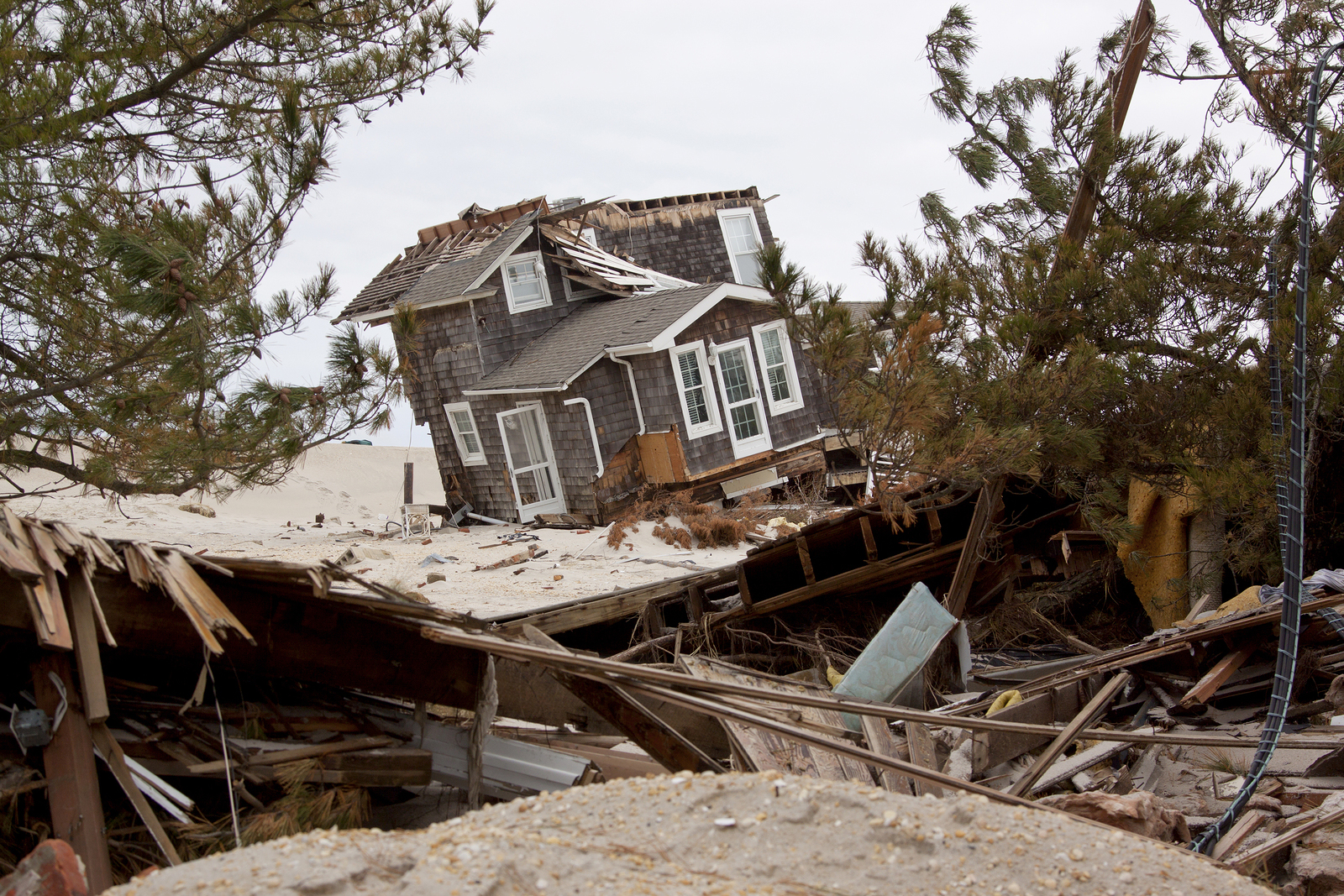 Hurricane Sandy ripped houses from their foundations along the shore in New Jersey (photo: bigstockphoto.com)

It’s been a year since Hurricane Sandy brought devastating floods to the east coast and destroyed many homes and businesses. Urban Planning Professor Elliott Sclar joins host Steve Curwood to discuss what lessons were learned from Hurricane Sandy about how to protect our coasts and cities in a warming world.

CURWOOD: From the Jennifer and Ted Stanley Studios in Boston, this is Living on Earth. I’m Steve Curwood. Just a year ago Superstorm Sandy mowed a path of destruction from the Caribbean to Canada. The storm center smashed ashore in New Jersey, and devastated a huge swathe of the US East Coast.

NEWS REPORTS:
ZEE: It is chaos along the Jersey Shore...the superstorm battering the barrier islands. In the cross hairs - Atlantic City - the road into the seafront town is completely submerged...
BLOOMBERG: Conditions outside are dangerous and they're only going to get worse in the hours ahead. Stay indoors and certainly away from the parks the beaches, the boardwalks, piers and seawalls.
CBS NEWS: Superstorm Sandy - The massive storm is blamed for at least sixteen deaths in the United States and Canada; at least 7.3 million utility customers have lost power in 16 states, and Washington D.C. It is estimated that Sandy has caused 10 to 20 billion dollars in damage, making it one of the most expensive storms in American history. 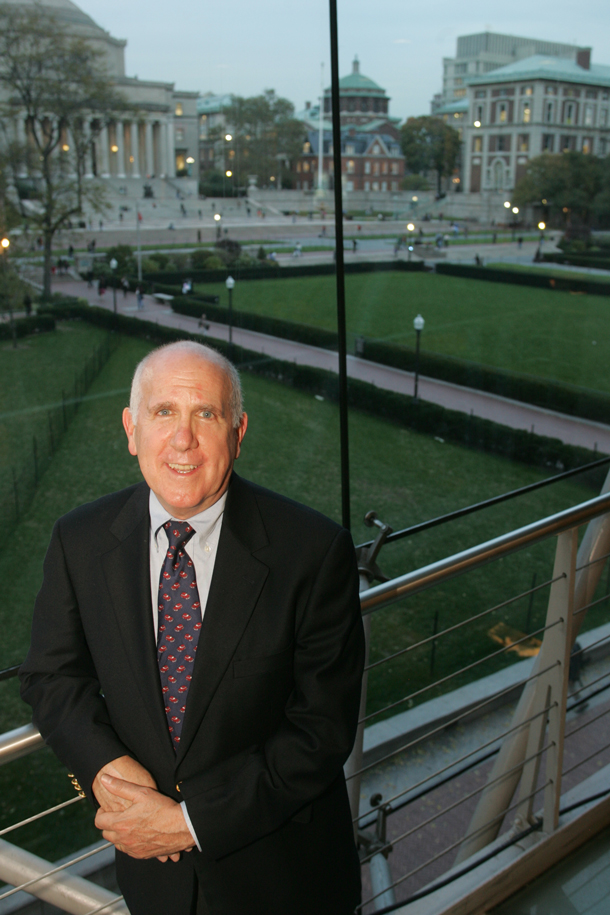 CURWOOD: At the final tally, Sandy dealt an estimated $68 billion dollar blow to the economy, and killed more than 280 people in all. During Sandy, Urban Planning Professor Elliott Sclar of Columbia University told us the monster storm was hitting both rich and poor, making truly comprehensive planning for recovery necessary. So we called him up again to find out how the recovery's going. Welcome back to Living on Earth, Professor.

SCLAR: Thank you. It's nice to be back.

CURWOOD: So tell me, where do we stand? It's been – what? -- a year since Hurricane Sandy? How are people who lost homes or property doing?

SCLAR: Well, most of them I don't think are doing very well. I think that part of what’s happened is the insurance settlements are proving to be slower in coming. The insurance companies are fighting. There’s debates about whether it was flooding or whether it was wind damage because there...some of the insurance covers wind damage but it doesn't cover flooding, and so we're having Talmudic debates over what are the causes of damages, which is leaving a lot of people hurt. But as bad as that is to me, one of the larger issues is the social equity issue in this, because a lot of people who were very very badly hit had no legal standing to collect anything. I'm talking about a large number of New Yorkers who are undocumented and renters and lost their housing in low-lying areas such as in places like Staten Island and are living in motels further inland. A lot of those people are doing very badly.

CURWOOD: So looking at the challenges that folks are facing, what do you see as the most acute? 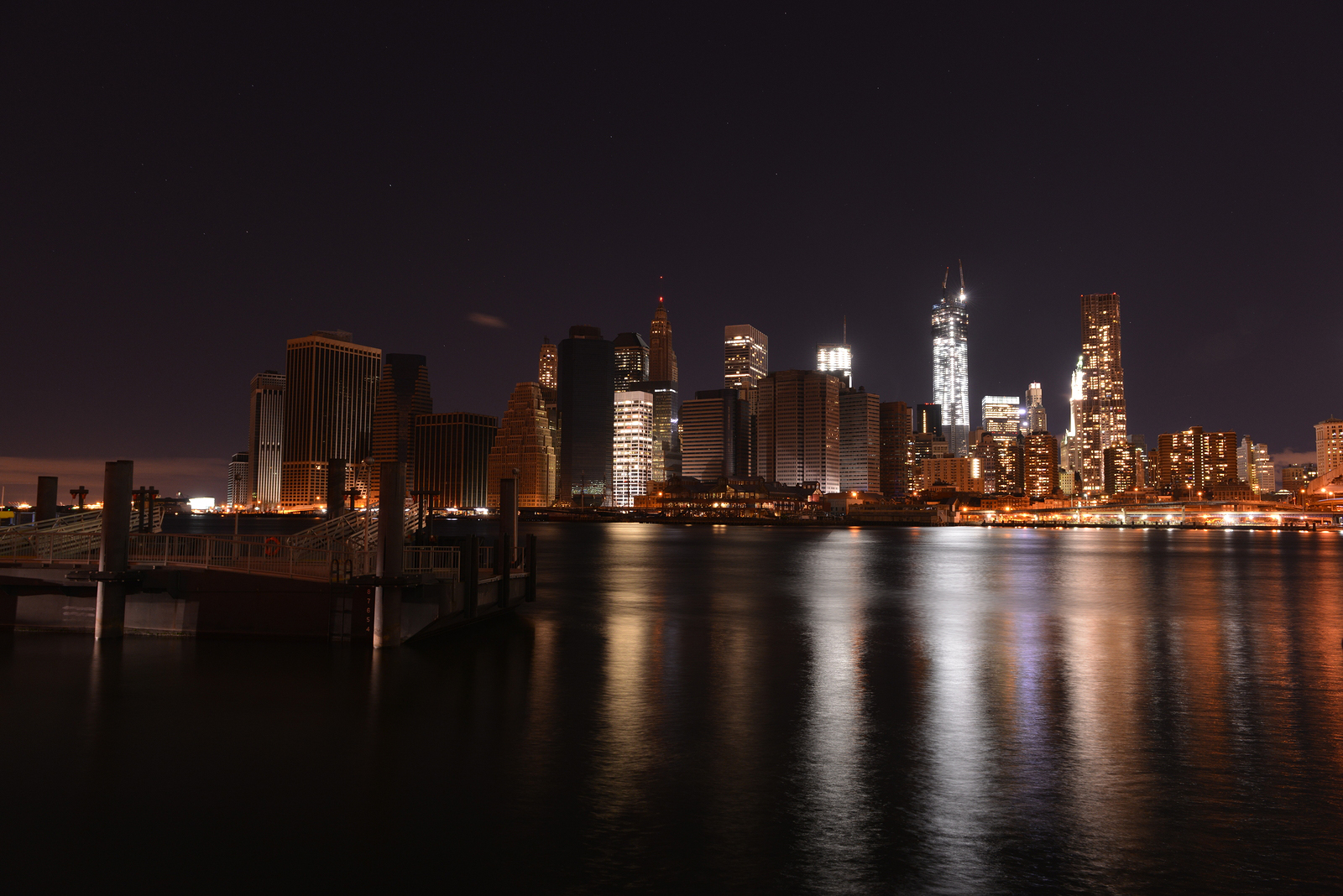 CURWOOD: Well, let's consider first, then, this question of rebuilding in flood zones. A year ago you were saying that some people would just have to think different about where they live.

SCLAR: Yes. I think the problem is that it’s a human tendency to, once the danger passes, we all really want to go back to living our lives just the way we were living them before the problem came. What people are doing is buying back-up generators and that's a perfect example of something that makes perfect sense at the individual level, but is irrational as a social response. 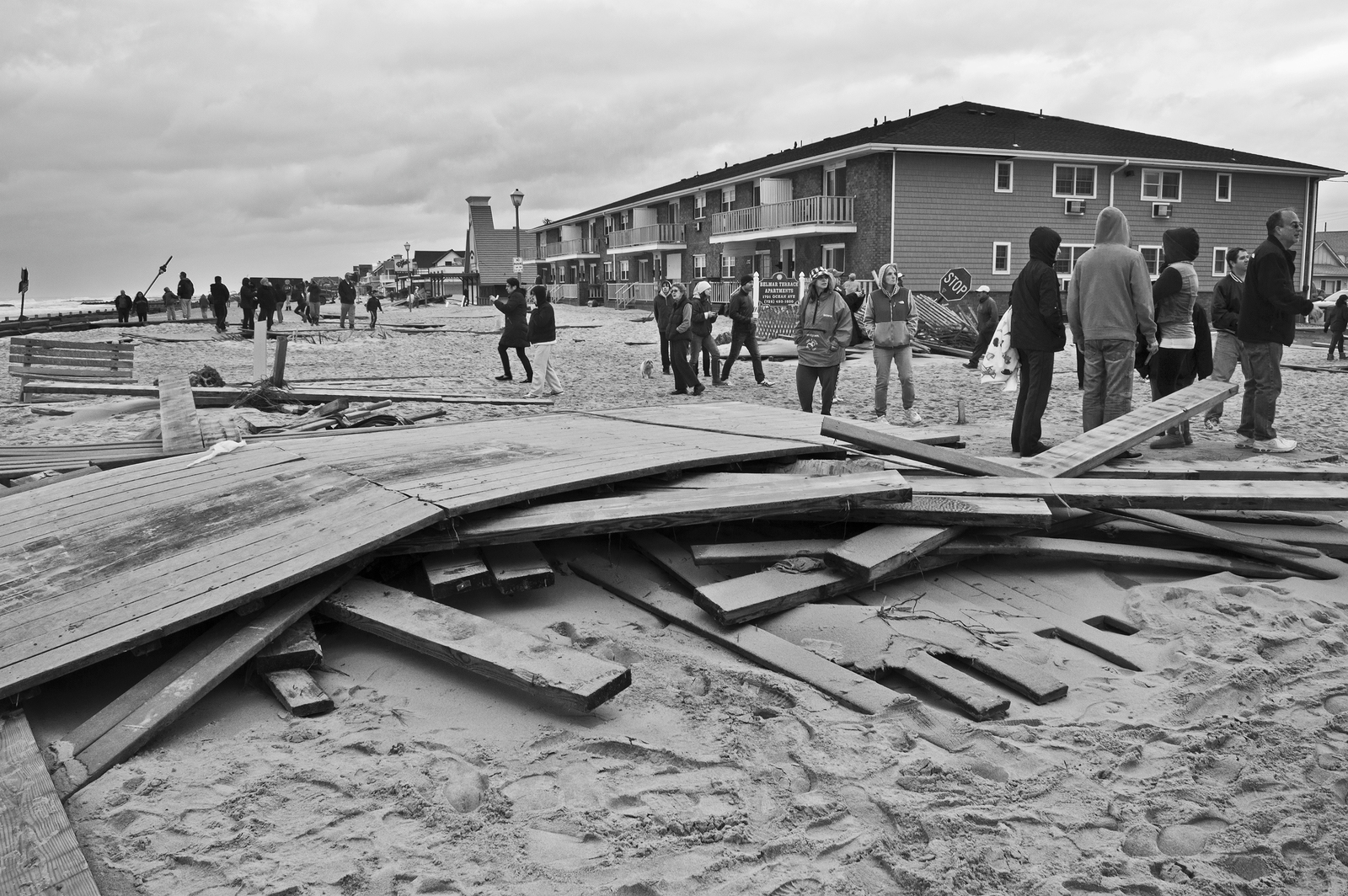 A New York sign before the storm (photo: bigstockphoto.com)

People who can afford to spending $5,000 to $20,000 to put these back-up systems in place -- imagine if we used all that money collectively and we buried our lines so that they would be protected better, we invested in more distributed energy and we invested in wind power and people put up more solar energy and things of that sort. All that money would go a lot further, but the mechanisms don't exist, so people are seeking individual solutions to what's really a massive social problem.

The other thing that’s going on is the notion of building along the water's edge is still a very powerful one, but what we really should be talking about and we’re not talking about, is how we begin to build our cities so that they respect the way in which the climate is changing coastlines, the way in which storms are happening, and so on, and that's really not happening. 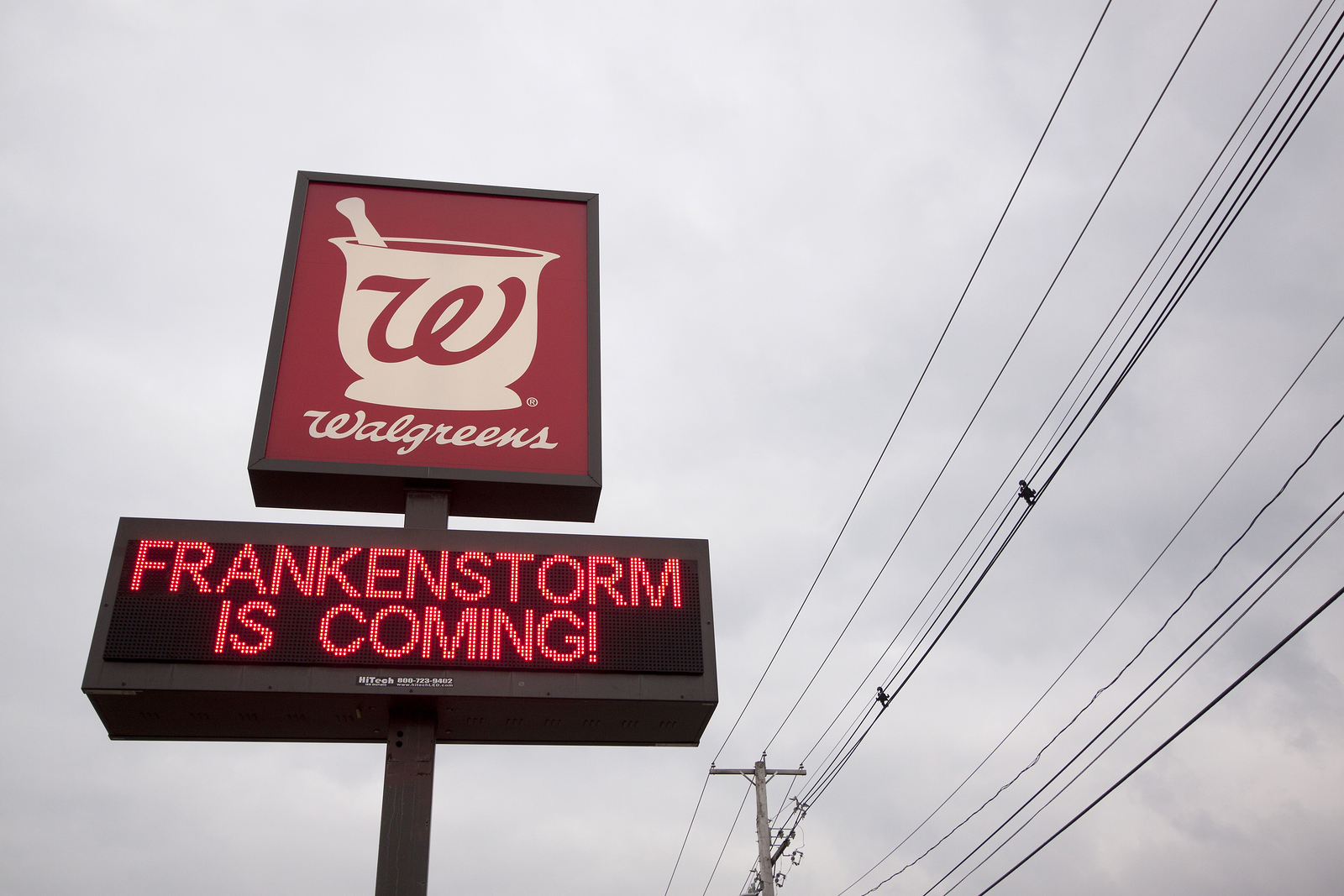 CURWOOD: What steps are the various levels of governments taking to encourage living in safer, smarter areas?

SCLAR: From what I've seen of the New York City, Mayor Bloomberg’s plan, it’s really more of a plan to harden development along the coastline, and less a plan for moving things inland. One of the problems with moving things inland is everyone's reluctant to write off real estate that they have along coastlines, so not that much is happening on that front right now.

What we should be doing is thinking about in a long-term way about how to deal with this regionally. We’re not doing it regionally either. Mayor Bloomberg, he does think big, but he thinks big about what he’s in charge of, which is just New York City, but it's not a New York City issue; it's a regional issue, it's a national issue. Everybody is thinking about very small local solutions. Individual homeowners are buying generators, towns are talking about their piece of the waterfront. New York City is thinking about everything from hardening up property to $40 billion seagates to protect against storm surges, but is anybody thinking in a larger regional systematic way about it? And the answer is no.

CURWOOD: If we did all the work to adapt to climate change, Professor, what do you think a truly resilient city would look like?

SCLAR: I think a truly resilient city, one, it would be one that took its floodplains and low-lying areas into account, made those open spaces; two, it would have a lot of redundancy in its infrastructure, in its transportation systems, in its power systems, in its water and its sewer system. Those would be cities that would be able to withstand the kinds of forces that would be be coming. When the sea level rises, we know where the water is going to go. We should be moving our development away from that.

CURWOOD: Professor, what’s a sign of hope that you see in the wake of Sandy?

SCLAR: Me, the best sign of hope that I see...I see almost every day -- it's really in the younger generation. I mean, they seem to get it a lot better than the older generation. I know we at Columbia University now, we now have a major in sustainable development. It’s the fastest-growing major at the university right now! Younger people don't even want to own cars anymore. Automobile ownership is falling off. Miles driven is falling off. There's a whole younger generation that gets it in ways that my generation doesn't. To me, if you want to know what the hopeful sign is, hopefully as these people began to take power in the world, some of these things will change.

CURWOOD: Elliott Sclar is a Professor of Urban Planning at the Earth Institute at Columbia University. Thanks so much for joining us, Elliott.