Vines on the March in Tropical Forests 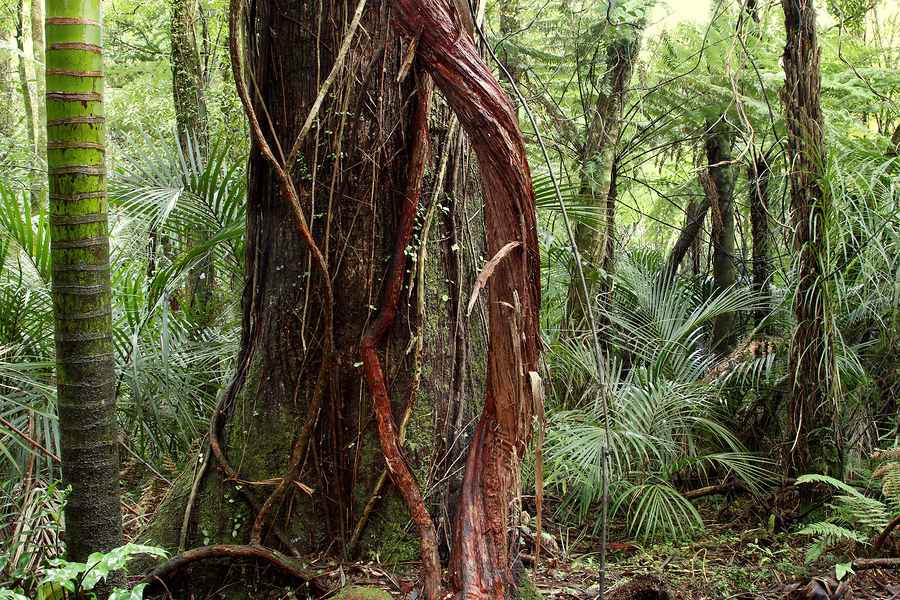 Trees with a large network of branches are more prone to vine infestation. Palm trees, with few branches, can more easily repel them. (bigstockphoto.com)

Carbon dioxide acts as a fertilizer for most plants and new research shows that woody vines, or lianas, are thrive particularly well in a more carbon rich environment. Oliver Phillips, geography professor from the University of Leeds, UK tells host Steve Curwood that’s not good news for tropical trees.

CURWOOD: Tropical forests are a rich and vibrant habitat. They are home to more than half of all the planet’s species of plants and animals. Yet though life flourishes in the hot humid equatorial regions, competition for space there can be fierce. As levels of carbon dioxide increase, the dynamics of species competition can be upset and thrown out of whack. CO2 acts like a fertilizer for most plants but new research shows that the woody vines, or lianas, that thrive in the tropics are particularly well suited to a more carbon rich environment. And what's good for the lianas is not necessarily good news for slower growing tropical trees. Oliver Phillips, Professor of Geography at the University of Leeds in the UK explains how these vines or lianas are getting the upper hand.

PHILLIPS: They compete with trees directly so they’re hitching a ride to the canopy, if you like, on the back of trees, on the back of the carbon the trees are investing in wood. Lianas do it cheaply, they’re getting up there, and then they’re competing in terms of stopping light getting to the trees, so that slows down the growth of some of the trees. They’re taking water out of the soil, of course, that’s also not great if you’re a tree and roots happen to be near a by, and also do in a more subtle way, change the composition from a tree’s viewpoint. 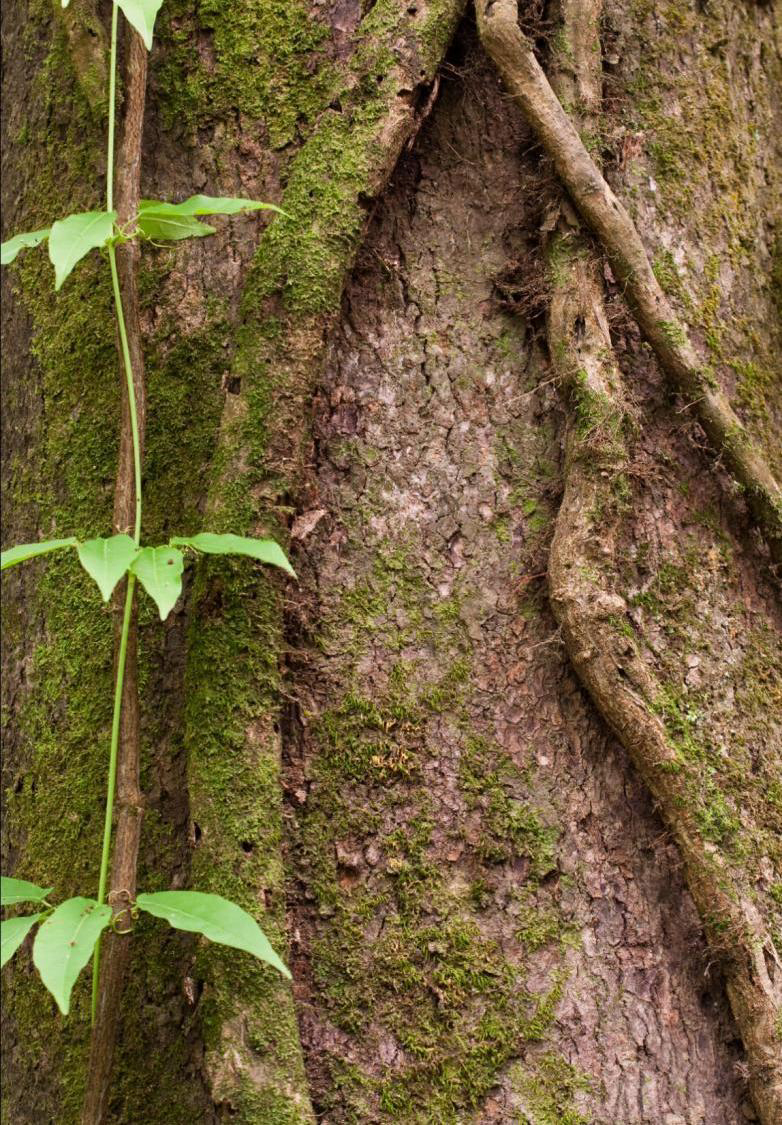 Vines can be found in most forests but are particularly abundant in the tropics. (US National Park Service)

So if you are a species of tree which has an architecture which is really vulnerable to liana infestation, you’re likely to get those extra lianas in you. If you happen to be, say a palm, which doesn’t have branches and it just goes straight up, and manages to shed, clean its trunk efficiently by dropping down leaves, in a liana rich world, you could actually have an extra advantage because all the trees around you are being smothered by lianas and you can get through because you’ve got special liana resistant techniques. So if you think about how a liana increase is affecting the forest, it’s affecting the carbon storage, but it’s also affecting the kinds of trees which grow.

CURWOOD: So here we are with about 40 percent more carbon dioxide in the atmosphere than we had 150 or so years ago, and that’s like fertilizer I guess in some respects for these vines, but what about about the trees? Don’t they also metabolize all this extra carbon dioxide and grow faster?

PHILLIPS: You’re right, Steve. We think they do. We think there’s a physiological level; in essence almost every plant should be benefitting from this extra CO2 in the air. Now, lianas are, because they’re getting this free ride to the canopy, these are the plants which will take special advantage of those extra resources. That said, we’ve got evidence that trees in the Amazon have been growing faster, for example, in the 1990s than they did in the 1980s. There’s good theory to support that’s probably partly induced by extra CO2 as well. 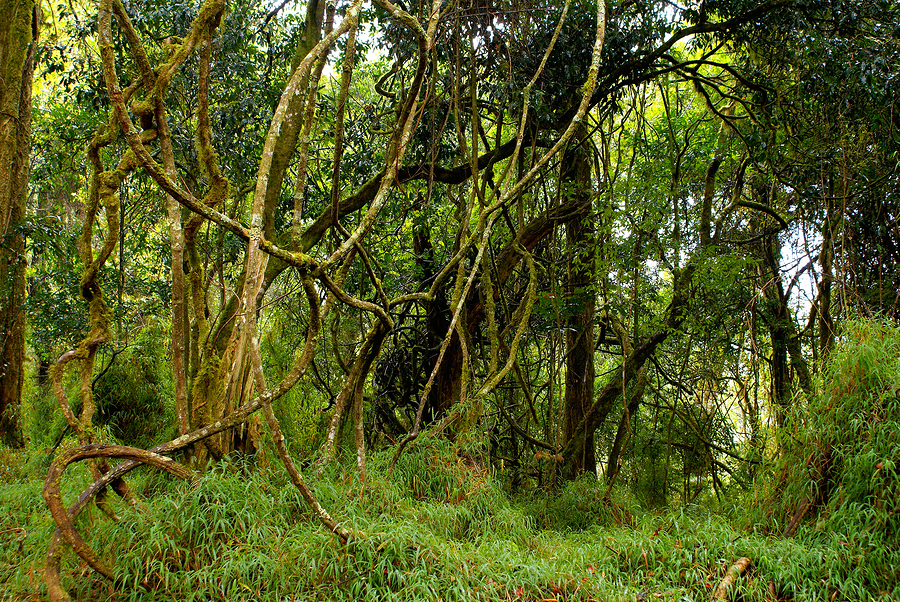 Woody vines, or lianas, are a natural part of tropical forests but they are disproportionately benefiting from a more carbon rich atmosphere. (Bigstockphoto.com)

CURWOOD: So how long do tropical trees live on average, do you think?

PHILLIPS: Well, that’s a good question. A difficult one to answer, but on average, one would say between 50 and 100 years, surprisingly little. There’s probably a few really old guys who get to about 500 years, but most of the system is quite fast.

CURWOOD: Tropical forests are usually a net sink for carbon, that is they soak carbon up out of the atmosphere, but what do you think is the capacity for forests or individual trees to store excess carbon dioxide? What kind of limits might there be?

PHILLIPS: Well, the limits could be set partly by climate itself, so we think CO2 is fertilizing trees, helping them to grow faster, and that in a carbon sense is “a good thing”, taking CO2 out of the atmosphere. But of course that same carbon dioxide which is fertilizing trees is also changing the climate, and in the Amazon the last few years there’s been a series of intense droughts. Those droughts have tended to kill more trees than were dying before.

So what we’re starting to see is a higher level of drought, possibly higher temperatures in the Amazon killing the bigger trees. Now that process then, accelerated mortality, if you like, is starting to counteract the accelerated growth which is driven by the CO2 so the mortality rate could increase beyond the growth rate. And if that were to be the case, then instead of seeing a carbon sink, which is what we’ve been measuring in the Amazon for decades now, in the future we could actually see the system becoming a carbon source.

CURWOOD: Let’s do a little math here in terms of carbon sequestration. So if trees sequester more carbon than vines do, but vines are taking over, what does that mean at the end of the day?

PHILLIPS: The net impact of all that is CO2 is benefiting the whole system in terms of carbon storage, but lianas are knocking that down about 20 percent lower than it would be if they weren’t there, and they’re doing that by surpressing some of the extra growth the trees would be doing, and killing some extra trees. 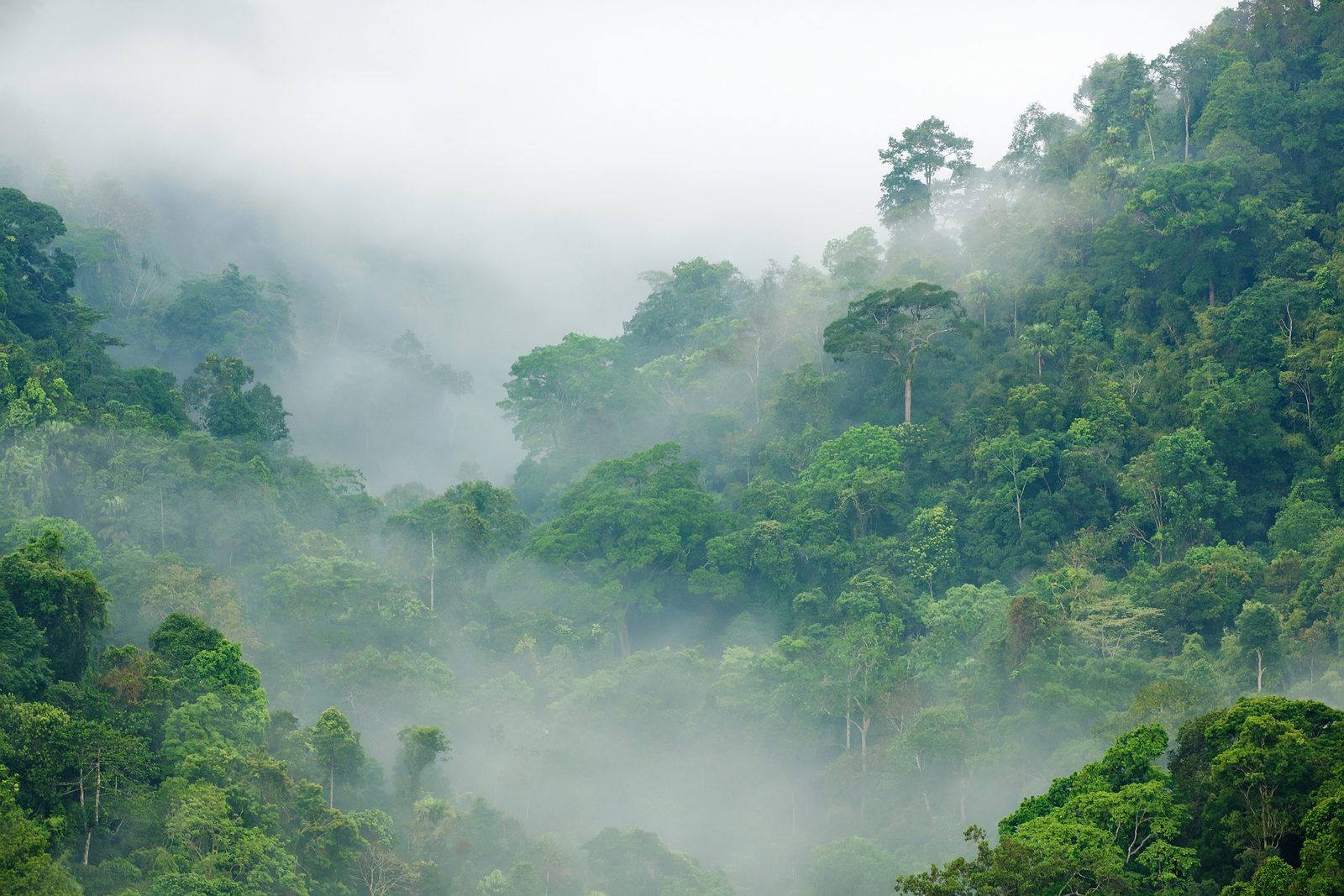 Lowland tropical forests respond to a warmer climate by migrating up mountainsides to cooler climates. (bigstockphoto.com)

CURWOOD: But what you’re saying is that as the vines spread then perhaps there’s 20 percent less carbon sequestration in the tropical forest.

PHILLIPS: Well, yes, there’s about 20 percent less than there would be if they weren’t there.

CURWOOD: Now another change in tropical forest dynamics is this notion that some species of lowland rainforest trees are beginning to migrate up mountain sides. Can you tell me about that?

PHILLIPS: Yes. There’s been a couple of studies now. One in the Andes in South America and one in Costa Rica. What they’ve done is that they’ve looked at permanent plots arrayed along an elevational gradient, and they’ve asked how’s the composition of those plots changed through time? The suggestion is that in any one place along that gradient, you’re tending to see new plants which are coming in. The new recruits in the forest tend to be from the warmer lower end of the spectrum, and the trees which are dying tend to be those which favor cooler, higher altitudes. So the trees do appear to be responding to climate change.

The big question is whether they can do it fast enough, and in particular, if they can do it fast enough given that actually when one goes to the tropics and goes to the mountainsides you often find rather than having a continuous forest there may be agricultural fields in the way. So the real challenge for the species is not just to be able to move, but in fact also to be able to jump over these fragmented landscapes and find in essence their preferred climate of the future.

CURWOOD: Of course, a mountain is in shape of a cone, so the further up you go generally there’s less and less area. That means, there’s limited space for migrating species. What does that mean for the possible extinction of some species as temperatures warm?

PHILLIPS: Well, you’re absolutely right. The space declines as you go up a mountain, and that means those species which need to move up, and many of them will find themselves increasingly confined to smaller and smaller areas. So even if they’re able to track that temperature change, that population is likely to decline anyway, and in particular, when you think about how do trees move up the hill - they obviously don’t walk, they don’t fly - they get up the hill by seed dispersal, and that requires typically in the tropics an animal to eat their seed and to defecate it out somewhere else. So we need to protect the animals if we want to save the plants.

CURWOOD: Oliver Phillips is a Professor of Geography at the University of Leeds in the UK. That’s so much, Professor, for taking this time.

PHILLIPS: Thank you very much, Steve.