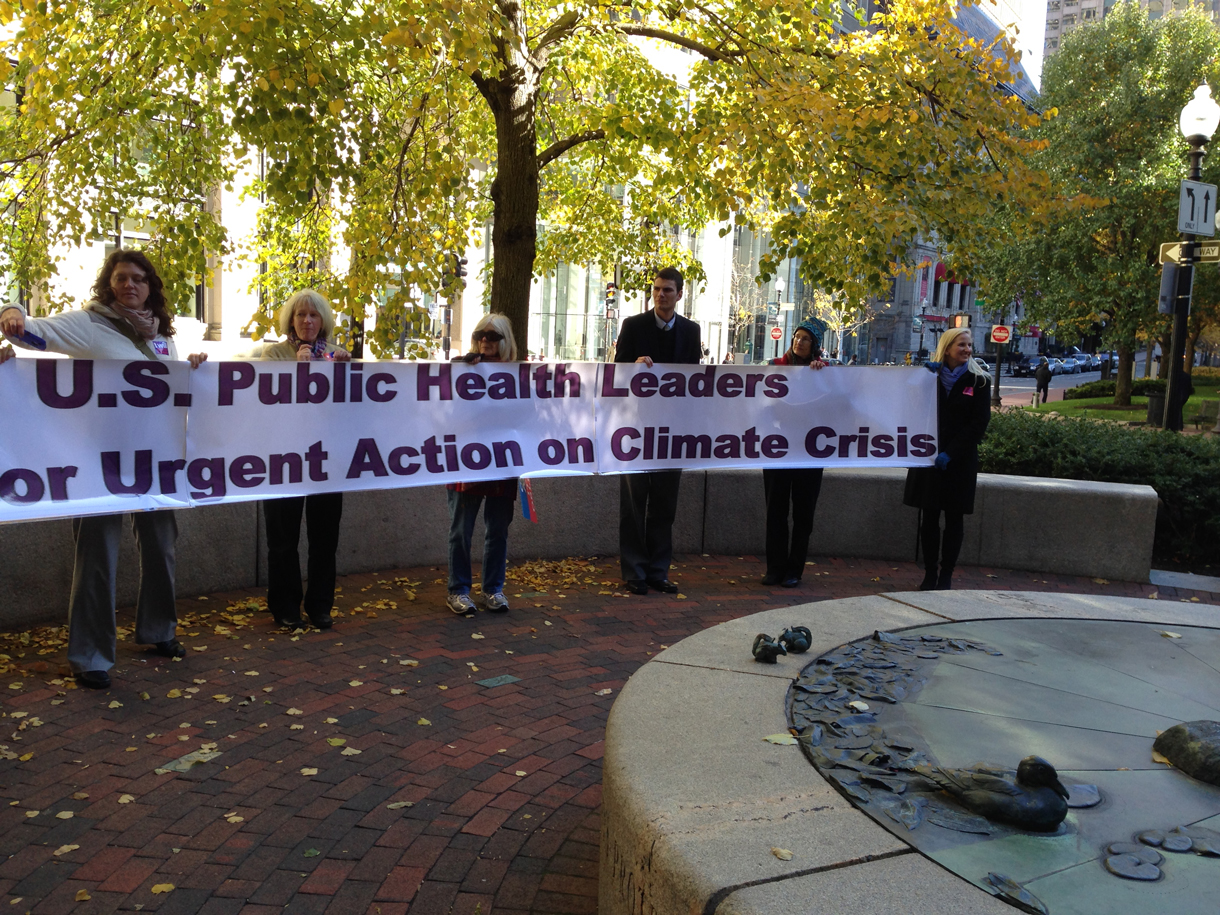 The EPA plans to roll out revised power plant emissions standards before President Obama leaves office, so is holding public hearings in cities around the country. Living on Earth's Emmett FitzGerald reports from a citizen's rally outside the EPA office in downtown Boston.

CURWOOD: It’s Living on Earth, I’m Steve Curwood. Existing power plants are the biggest source of carbon pollution in the US, and new EPA rules to limit their emissions have been mired in controversy for years. As part of revising those proposed rules, EPA has been holding public hearings in 11 cities around the country, giving people a chance to sound off. In Boston, concerned citizens and activists gathered to show support for tough new limits on the biggest emitters, dirty coal plants, and Living on Earth’s Emmett Fitzgerald went along to listen in.

FITZGERALD: It feels like winter outside the EPA office in downtown Boston, but the biting cold hasn’t deterred the fifty-odd people huddled together in Post Office Square Park. Sierra Club organizer Catherine Corkery brings the crowd together.

CORKERY TO CROWD: I am so excited. I’m sure you guys have been waiting as well to get some action on carbon for existing power plants, am I right? CROWD: Yeah! CORKERY:Alright! 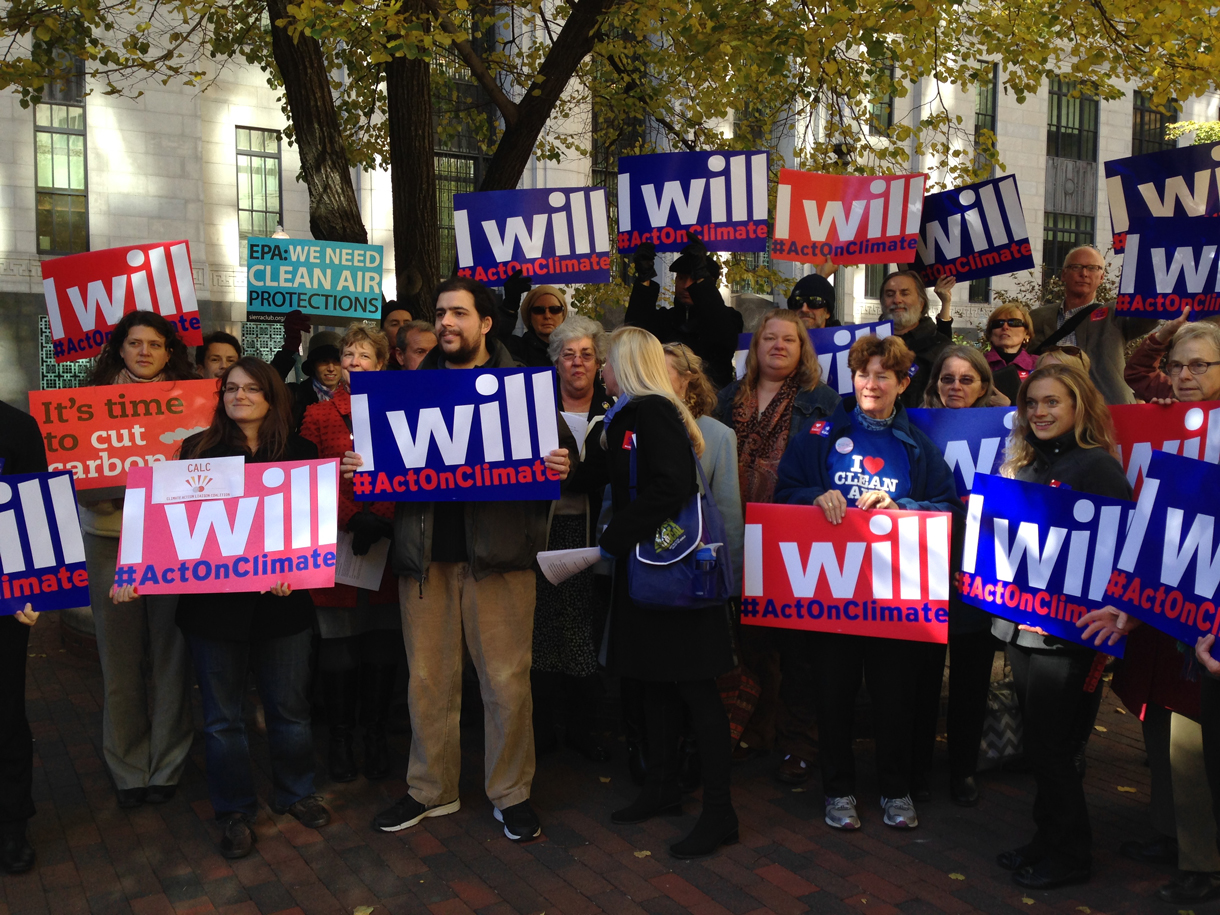 FITZGERALD: They carry red and blue signs that say Act On Climate, and they’ve come from all over New England to show support for the EPA’s new carbon regulations.

FITZGERALD: Gail made the three hour trek because she’s concerned about the impact climate change is having on the plants and animals around her New Hampshire home.

SCHMITT: I’m also here because the fish in our lake are contaminated with mercury from an existing power plant in Bow, New Hampshire, which is 50 miles away. So we’re poisoning our residents, that’s also a major concern.

FITZGERALD: The health effects of fossil fuel pollution are a major concern. Dr. Linda Rudolph of the Public Health Institute.

RUDOLPH: We have mountains of evidence that climate change has a huge impact on our health. And if we want to prevent catastrophic harm to our children and grandchildren, we need to support EPA’s rules now, and we need to remind every one of our elected leaders that they need to be thinking about climate change every time they make a decision.

FITZGERALD: Vincent Maraventano, Director of the Massachusetts Interfaith Power and Light, says that because most power plants are built near poor communities of color, carbon pollution is an environmental justice issue.

FITZGERALD: And it’s not just in the US. Poor countries that emit relatively small amounts of greenhouse gasses will be hardest hit by the impacts of climate change.

MARAVENTANO: Climate change is a matter of climate justice. Environmental justice is not just about putting an incinerator next to the poor people. It’s about climate change.

FITZGERALD: But there will be losers as well as winners when the EPA clamps down on emissions. Natural gas plants should have little trouble meeting the new standards, but coal is another story. Without massive investment, coal plants will struggle to meet the new EPA rules. Phil Smith of the United Mine Workers of America, says that regulations like these kill jobs.

FITZGERALD: And Smith says the current regulations could be even worse for coal because the carbon-capture and sequestration technology needed for coal plants to meet the rules is expensive and underdeveloped. Smith believes the loss of coal jobs would devastate the economies of coal states like West Virginia, Pennsylvania and Ohio.

FITZGERALD: The crowd in Boston has sympathy for the miners. Stan Becker, a small business owner, says the labor issues can’t be ignored.

BECKER: People are going to lose jobs, and I think that has to be addressed. These are real people and it’s going to affect the communities that they’re in. So there’s got to be a way to address that if we’re going to be making these kinds of changes.

FITZGERALD: But some economists argue that transitioning to a clean energy economy will spur economic growth and create green jobs. Becker says if we want a stable economy, we have to slow carbon emissions. 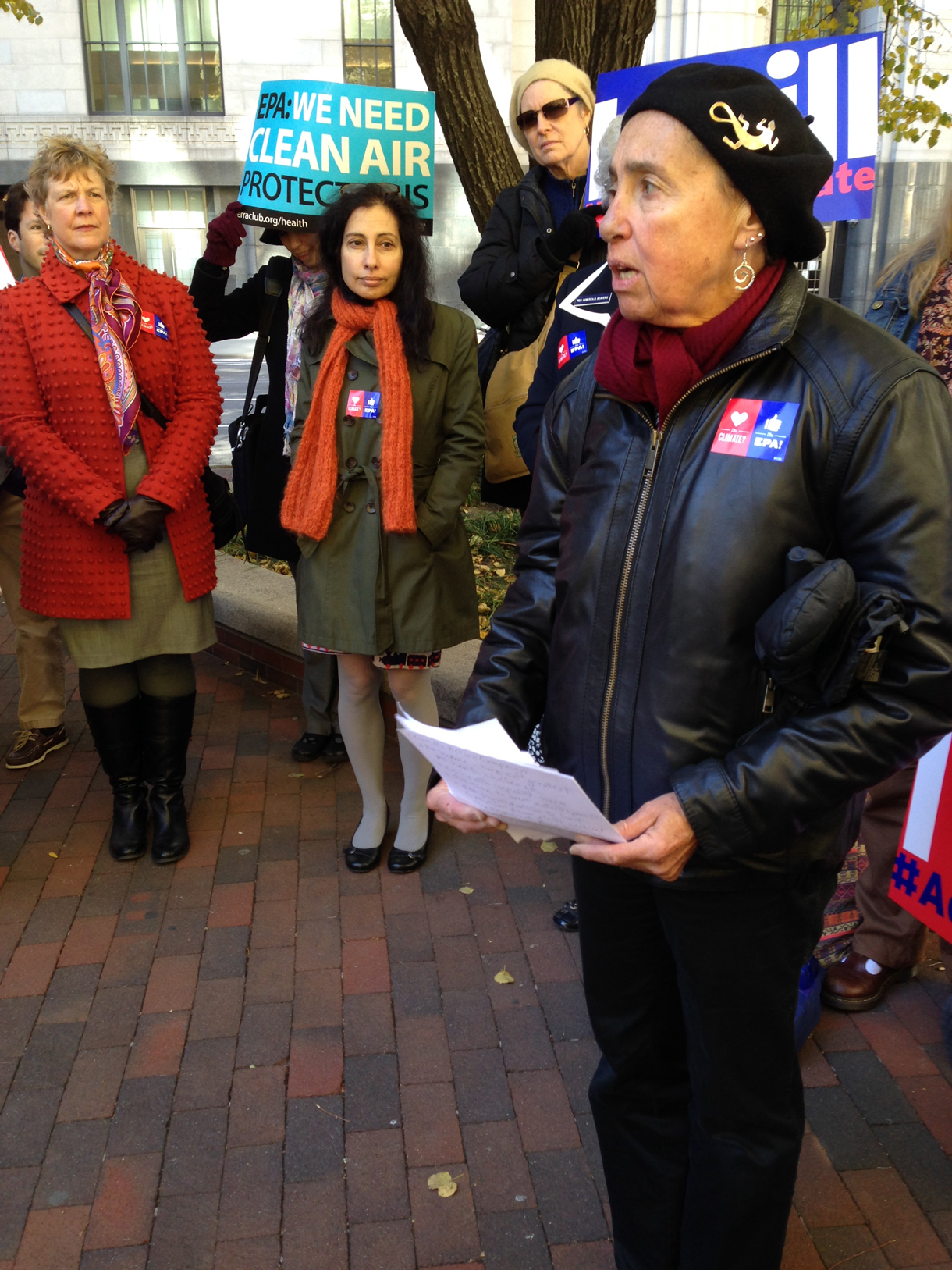 Linda Rudolph of the Public Health Institute speaks to the crowd about climate change and public health (photo: Emmett FitzGerald)

FITZGERALD: The economy of the future depends on the success of small businesses, and Susan Labandibar, president of TechNetworks Boston, says that small business owners should support carbon regulation.

LABANDIBAR: Because small business owners are not in it for short-term profits, we don’t have to watch our stock price. What we’re trying to do is build a business with lasting value, and we need a couple of things for that. We need a stable economic environment, and we need a stable climate. Otherwise, we’re not going to be able to build the kind of future that we’re trying to build for our children and our employees.

FITZGERALD: It will be months, if not years, before the EPA emissions standards are finalized, and they will undoubtedly face legal challenges. But rallies like this across the country show that the public cares about carbon pollution. Vincent Maraventano says grassroots action will help push this legislation and these new rules through.

[CHEERS OF CROWD AT RALLY]

FITZGERALD: For Living on Earth, I’m Emmett FitzGerald in Boston.