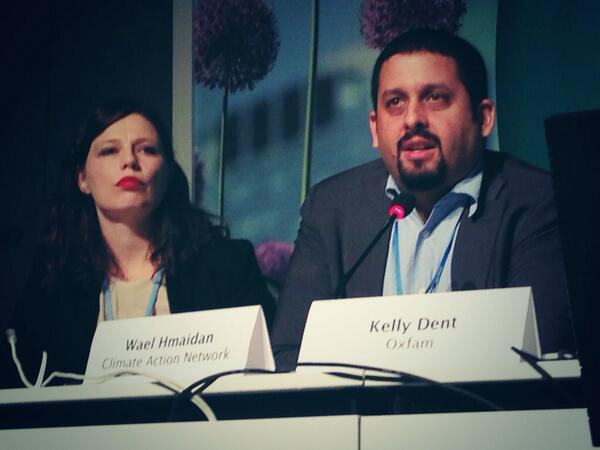 Typhoon Haiyan kills thousands and underscores the importance of action from this year's UN Framework Convention on Climate Change meeting in Warsaw, Poland (COP 19). In an emotional speech, the Philippines delegate, Naderev “Yeb” Sano, announced that he would fast until meaningful action was taken at COP19 to slow global warming. Climate Action Network director Wael Hmaidan says he and many others at the meeting and around the world are fasting too.

CURWOOD: From the Jennifer and Ted Stanley Studios in Boston, this is Living on Earth. I’m Steve Curwood. Typhoon Haiyan was one the most powerful and destructive storms ever recorded, with sustained winds of 195 mph and gusts up to 230. And in terms of human impact, it may well be the worst. It scythed a trail of destruction across the Philippines, and on to Vietnam and China leaving thousands dead, and whole towns flattened.

The supertyphoon struck just before this year’s UN Climate summit began in Warsaw, Poland, and it underscored the increased violence of storms in a warmer world, and the need for urgent action. As the Conference of the climate convention parties got underway, there were many expressions of sympathy for the Philippines and gratitude from the Philippines delegate himself, Naderev Yeb Sano. 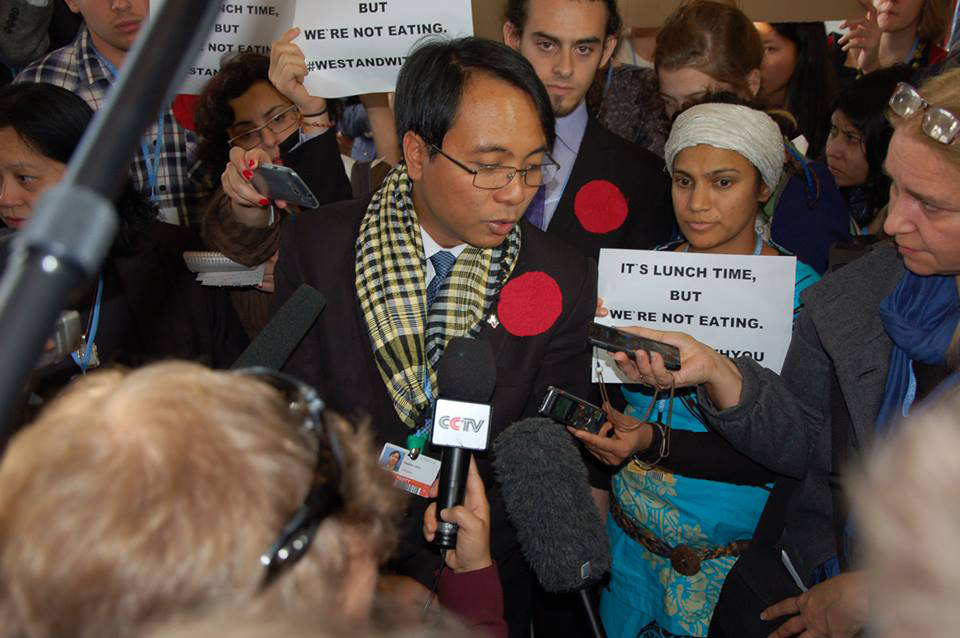 Yeb Saño speaking with reporters about his hunger strike at the climate change conference in Warsaw (photo: Climate Action Network)

SANO: It would be remiss of my delegation not to thank everyone who have expressed solidarity with my the Philippines in this difficult time.

CURWOOD: Yeb Sano is also the climate commissioner of the former American territory, and he gave a powerful and moving speech pointing out how little had been achieved by previous climate summits. He noted that promises made four years ago by rich nations to provide billions to help poor countries deal with climate change have yet to be kept, and now the disadvantaged are paying the price of inaction.

SANO: Mr President, in Doha we asked, if not us, then who? If not now, then when? If not here, then where? But here in Warsaw we may very well ask the same four trite questions. What my country is going through as a result of this extreme climate event is madness, the climate crisis is madness. Mr. President, we can stop this madness right here in Warsaw.

It is the 19th COP but we might as well stop counting because my country refuses to accept that a COP 30 or a COP 40 will be needed to solve climate change, because it seems that despite the significant gains we have had since the UNFCCC was born, 20 years hence we continue to fall short in fulfilling the ultimate objective of the convention.

CURWOOD: During his 17 minute speech Sano ignored frequent gongs telling him he was over his allotted three minutes, and struck a personal note. Supertyphoon Haiyan made landfall in his family's hometown, and he learned that though there was no food to be had, his brother was working, gathering up the dead bodies.

SANO: In solidarity with my countrymen who are struggling to find food back home, and with my brother who has not had food for the last three days, with all due respect, Mr. President, and I mean no disrespect for your kind hospitality, I will now commence a voluntary fasting for the climate. This means I will voluntary refrain from eating food during this COP until a meaningful outcome is in sight, until concrete pledges have been made to ensure mobilization of resources for the green climate fund. We cannot afford a 4th COP with an empty GCF.

CURWOOD: Yeb Sano added that climate summits have been called many things, including a farce, and an annual carbon intensive gathering of useless frequent flyers, and the Project To Save the Planet - which it could be.

SANO: We can fix this. We can stop this madness, right now, right here, in the middle of this football field and stop moving the goal posts. Now can Humanity rise to this occasion? Mr President, I still believe we can. Thank you, Mr. President, thank you. 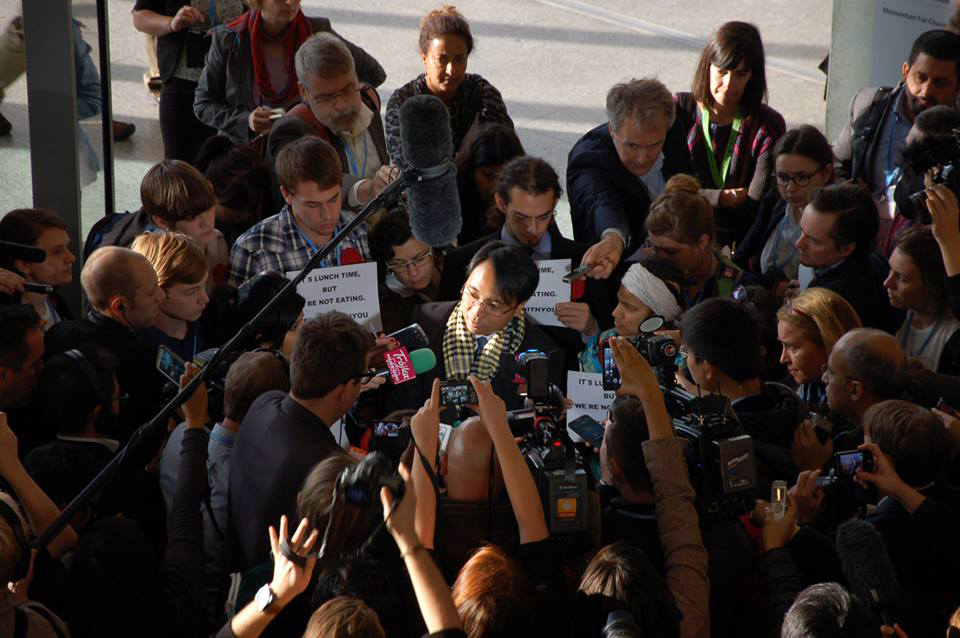 CURWOOD: Mr. Sano’s complete speech is at our website, LOE.org.

Climate justice advocates took Yeb Sano’s hunger strike as a call to action. In Warsaw and around the world, many are joining him, including Wael Hmaidan, the Executive Director of the Climate Action Network, which represents NGOs in 90 countries. He says Mr. Sano’s emotional appeal was no surprise.

HMAIDAN: We expected a very emotional speech, and it moved everybody there. What was not expected here is the reaction of the governments, so after Philippines’ speech we started hearing the other country’s groups talking and unfortuately we heard the same kind of rhetoric as if nothing has happened, as if the tragedy in the Philippines has no meaning.

CURWOOD: Now Mr. Sano announced that he was beginning a hunger strike until meaningful climate action was taken at the Conference of the Parties there in Warsaw, and you’ve decided to join him. Why?

HMAIDAN: Well, because we’re at this particular time of history. We really need to do something different than what we’re doing. We usually come here, try to negotiate, try to engage in climate policy text, trying to move commas, trying to move words, but the problem is not here, the problem is the political will. To solve climate change, it has to happen at the capitals first. We need to create new political will, and to do that we need to show that we’re serious. We need to take both actions.

It’s really unbelievable, and it’s really madness, as Sano says it, when countries just a day after Sano’s speech, a couple of days after the tragedy in the Philippines, they started reducing their climate ambitions, such as Australia actually repealing its climate legislation and cancelling funds that are earmarked for renewable energy. It’s unbelievable. And then you have Canada afterwards actually standing up and congratulating Australia for this move. This is insane. This is an insult to the Philippine people. This is actually telling the Philippine people that, “Yeah we’re fine with what’s happening...and expect more.” They’re sending them a death note.

CURWOOD: So how many folks have joined this hunger strike that you know about?

HMAIDAN: Well, you have students in the US, we have faith communities from around the world, you have NGOs, even some of the party delegates are contemplating joining this hunger strike. It’s not easy because we’re here working all day in negotiations, running around, we wake up at 6, return after 1 a.m. We sleep 3, 4 hours every night, but still people are going on hunger strikes. So there are now in the hundreds, I would say. It’s hard to count because initiatives are coming from around the world. We’re trying to connect people together, but it’s not easy.

CURWOOD: So tell me, how are you doing physically?

HMAIDAN: I’m feeling energized. I have to say I’m a bit surprised. I didn’t expect it to be that easy, and I think it’s because -- two reasons: one, it’s actually from the heart so I’m not feeling any stress, and, of course, the fact that we are so busy during the day trying to talk to the delegates, trying to coordinate civil society, the time flies, and I have to say, I’m feeling very fine, very energized and very motivated and very determined.

CURWOOD: What are your demands? What are the demands of the hunger strikers?

HMAIDAN: There isn’t one specific demand, again because it’s not coordinated in any way, and saying “This is what we all want.” For us, we want political movement. We want to see progress in the negotiations. We want to see respect to the vulnerable people like the people of the Philippines, the islands, Africa and all very poor developing countries. We know that it’s not going to be solved here in the COP, the climate problem. We know it’s a long term process, but we need to see some seriousness in it.

The numbers that the countries put on the table to reduce their greenhouse gas emissions that’s responsible for climate change are really pathetic. By 2050, we need to completely be free from fossil fuels: oil, coal, natural gas...if we want to save the species and human civilization from climate change impact. This not only requires cooperation not only of civil society, it needs to become a general public demand. It has to become a top priority of the general public. So the church, the youth, the development movement, all kinds of movers that are involved in health, human rights, development, poverty, they need to also understand that if we lose the climate fight, all other fights are lost.

CURWOOD: Wael Hmaidan is the Executive Director of the Climate Action Network. Thank you so much.

More about the Climate Action Network (CAN)