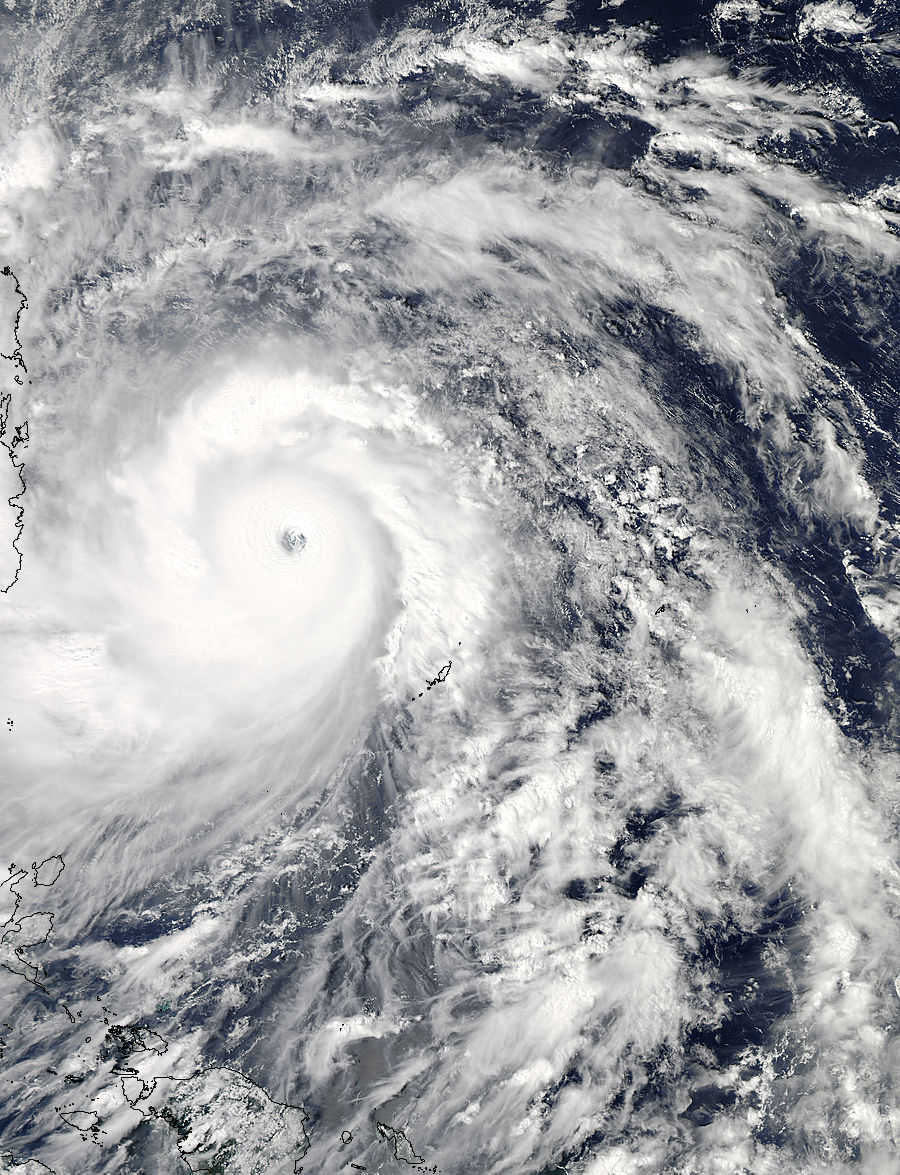 The 195 mph typhoon that devastated much of the Philippines set records as one of the strongest storms ever to make landfall. Kevin Trenberth from the National Center for Atmospheric Research says that scientists expect more such large powerful storms as climate change continues to warm the world’s oceans and cause sea levels to rise.

CURWOOD: So what is the risk that we will see more superstorms in the years ahead as the planet warms and sea levels rise? To get some answers, we called Kevin Trenberth. He's a senior scientist at the US National Center for Atmospheric Research, to ask him what we can learn from Supertyphoon Haiyan.

TRENBERTH: Certainly this was a very strong, and very big storm, very intense storm, and the unusual part of it perhaps is that it made landfall, it barreled right through the Philippines whereas we’ve had certainly as big storms before but not where they made landfall.

CURWOOD: And by the way, the difference between a hurricane and a typhoon is?

TRENBERTH: Well, a hurricane is a same animal in the Atlantic. A typhoon is in the Pacific Northwest and another name for them is cyclone, for instance, in the Bay of Bengal.

CURWOOD: Now, here in the Atlantic this year it was a relatively calm hurricane season, but then this collosal typhoon crops up in the Pacific. What’s the relationship, if any, there? 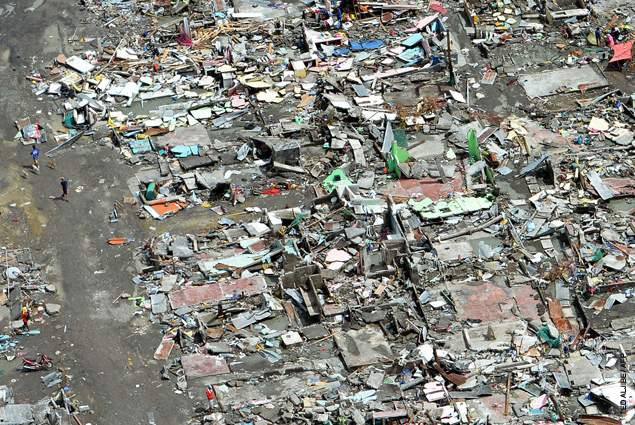 An aerial photo of widespread damage from Typhoon Haiyan. (Noel Celis/ US AID)

TRENBERTH: Well, there has been other activity in the Pacific as well, there was a very big typhoon that just brushed by Japan a short time ago, and, of course, a lot of activity over in the Bay of Bengal that went into India. And so there has been activity elsewhere, and frequently when that happens it does have a supressing effect on the Atlantic. In other words, there’s a little bit of a competition around the tropics as to where the activity is going to occur.

CURWOOD: Now this area near the Philippines is no stranger to typhoons, why is that?

TRENBERTH: The Pacific Northwest region is where some of the warmest water occurs in the world. To the east of the Philippines the sea temperatures have been running as high as about 85 degrees Fahreinheit, and this is about as warm as the ocean gets. If it gets very much above there it quickly gets knocked down again because of evaporative cooling with the storms that are attracted to that region. And in fact, sea level is higher over there. In the last 20 years, sea level has been going up in that region faster than anywhere else in the world. You might say, it’s really the hotspot of the world.

CURWOOD: So you’re saying the ocean near the Philippines is actually experiencing a higher rate of sea level rise. Why is that? 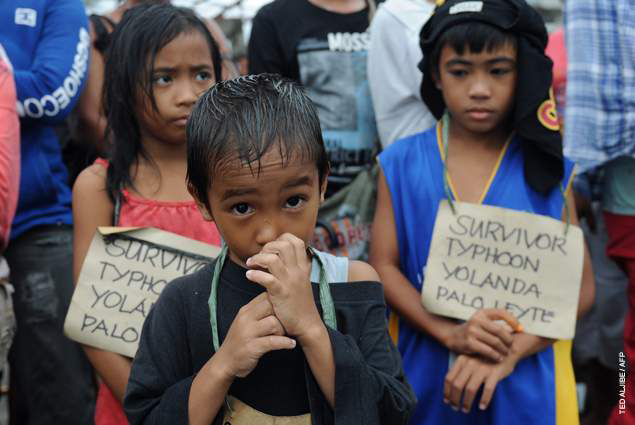 TRENBERTH: There is a change in the weather patterns related to the phenomenon that is widely known as La Niña where there is cooler sea surface temperatures in the central and eastern Pacific, but warmer than average sea surface temperatures in the west. The trade winds are stronger...they’ve gotten stronger over the last 20 years compared with, say, the previous 30 or 40 years. And the sea level has piled up over there. So the sea level has gone up in the region just east of the Philippines by about 20 centimeters, about eight inches, over the last 20 years or so, whereas globally sea level has gone up about two-and-a-half inches.

CURWOOD: Wow. So that amount of sea level rise must make storm events like this typhoon even more severe there.

TRENBERTH: This is certainly true when it comes to the storm surge. So sea level rise combined with perhaps a more intense storm and heavier rains contributes to damage that previously would not have occured.

CURWOOD: Now help me understand what’s going on here. Of course, we can’t attribute any single event to climate change, but what in your view is the relationship here between this dramatic storm and a warming planet? 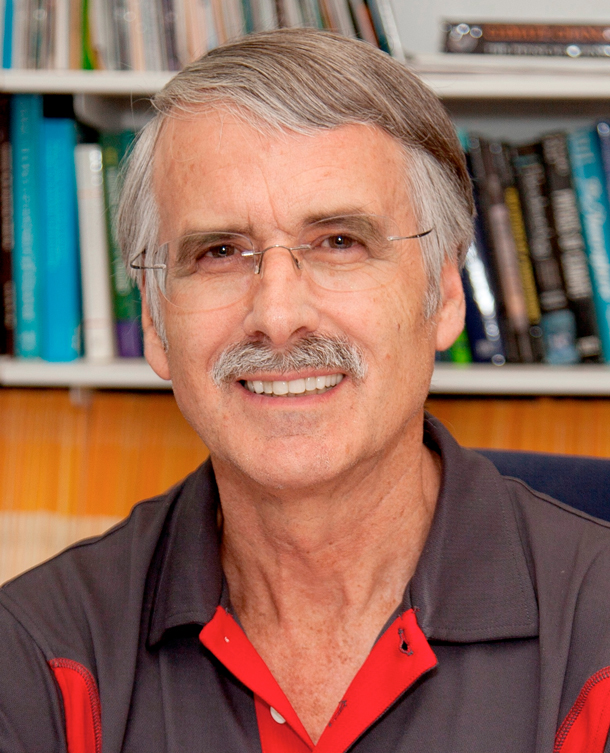 TRENBERTH: Well, the environment in which these storms are occuring is changed because of climate change. The sea temperatures are higher, and the atmosphere above the ocean is warmer and moister as a result, and these storms reach out and grab that moisture, bring it into the storm, and as a result, the storm tends to be more intense, there are heavier rainfalls, there’s greater flooding associated with that, and the storm surge, because of a higher sea level, is also greater than it otherwise would be. 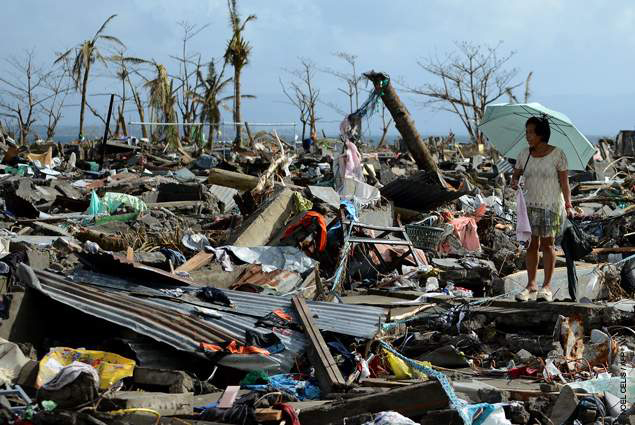 A survivor walking among debris from homes destroyed by typhoon Haiyan in Leyte, Philippines. (Photo: Noel Celis/ US AID)

CURWOOD: Kevin Trenberth, what do you expect in terms of typhoons and cyclones and hurricanes going into the future?

TRENBERTH: The understanding we have at the moment is that we do expect bigger, more intense, storms, however, there may well be fewer such storms overall, and one of the reasons is that if you have one really big storm, it churns up the ocean, it takes heat out of the ocean, so the ocean gets cooled off, and it creates a less favorable environment for the next storm. And so, one of these big storms can perhaps replace three or four somewhat smaller storms. And so we may end up with fewer storms, but when they do occur, look out. 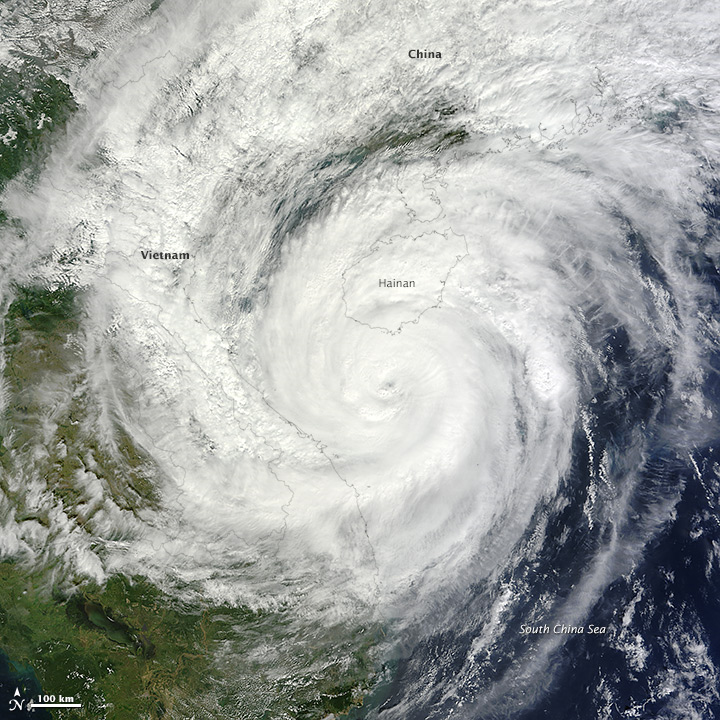 CURWOOD: Kevin Trenberth is a distinguished senior scientist at the US National Center for Atmospheric Research in Boulder, Colorado. Thank you so much for taking this time.

TRENBERTH: Thank you very much, Steve.