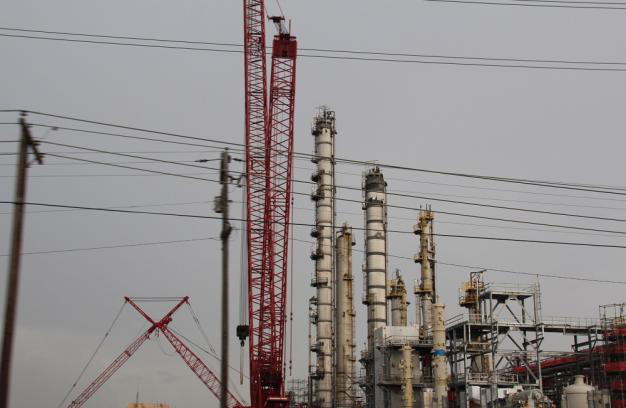 The fracking boom has led to renaissance for the chemical industry, particularly for plastics makers in Lousisiana, where the plants are major employers. In this report from the Gulf Coast, the Allegheny Front's Reid Frazier found that the chemical boom is fueling plenty of jobs in Louisiana, but they can be dangerous as well as lucrative.

CURWOOD: Well, coal use in the US continues to decline, mostly thanks to the huge expansion in fracking for natural gas. The fracking boom has also helped fuel a renaissance of chemical plants in Louisiana, and could bring such industry to shale gas country. And that means jobs, lots of jobs at these chemical plants. But in this report from the Gulf Coast, Reid Frazier of the public radio project The Allegheny Front finds the newly abundant jobs also come with abundant risks.

[INSIDE A CAR DRIVING ON THE ROAD]

FRAZIER: On a rainy morning, Mike Eades drives around Geismar, Louisiana. It's about halfway between New Orleans and Baton Rouge, and it's in the middle of Louisiana's so called 'chemical corridor'. It's a 60-mile stretch where roughly a quarter of the country's petrochemicals are made. Eades points out several large construction projects at hulking industrial plants.

Eades is director of the local development corporation. His job is to bring new business to the area.
He pulls over. Workers in the distance are preparing a site for construction.

FRAZIER: The site will house two plants for the company Methanex. Methanex is the world's largest producer of methanol, a basic chemical made from natural gas. The total price for the project is over a billion dollars. But the price itself isn't the most eye-popping thing about these new plants.

EADES: They are just actually just dismantling another plant in Chile and moving it to this area.

FRAZIER: Eades has been in the business for 30 years. And he's worked in seven different states. In the last year alone, he's seen about $3.6 billion in newly announced projects here.

EADES: And that's by far the most that....that I've ever experienced in my career, in any location.

FRAZIER: These projects are all happening because of the fracking boom. It's made natural gas cheap and abundant. And chemical companies use natural gas as a raw material.

While the boom comes at a good time for the region's economy, people here also know: these plants can be dangerous. This fact was driven home one morning in June. Antionette West was lying on her couch in Geismar. 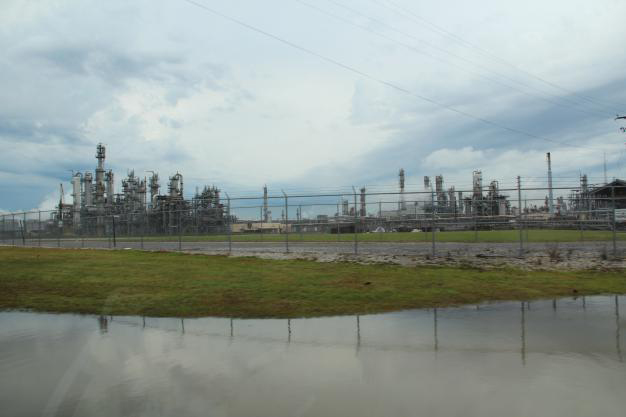 Geismar, Louisiana is part of a 60-mile stretch along the Mississippi River where nearly a quarter of the nation's chemicals are produced. Photo: Reid R. Frazier


WEST: The house shook, and I got up and I went to the door.

FRAZIER: She thought it was an explosion at a nearby vinyl plant, which caught fire last year. But she couldn't see any smoke when she looked in that direction. Then she looked behind her trailer.

WEST: All I seen was black smoke.

NEWS REPORTER ON TV: A massive explosion and fire at a chemical plant rocks the Geismar community near Baton Rouge...

FRAZIER: It was the Williams Olefins plant in Geismar. One worker died in the explosion, another died the next day from his injuries. Over 100 were hurt.

The plant makes ethylene and propylene. It's the same kind of plant - an ethane cracker -- that Shell Chemical has proposed building in Western Pennsylvania. Ethylene and propylene are the building blocks of plastic and other chemicals. They're also highly flammable. The company said a rupture in a heat exchanger caused the explosion. For West, it was another moment where she wished she didn't have to live so close to a chemical plant.

WEST: If I could move today I would move. I'm not going to lie. I would get out of here.

FRAZIER: But this is the only place she can afford. The company reported releasing 31,000 pounds of chemicals in the blast, mostly propylene, which can burn the eyes and skin. But the Louisiana Department of Environmental Quality - the state regulator - said that its air monitoring taken that day showed no unsafe levels of chemicals in the air near the plant.

LeRoyal Ealy lives two doors down from West. He's an electrician who's worked in many of the plants in the area. As his family gets ready for dinner one night, he says he isn't worried about air pollution from the explosion.

EALY: I didn't think nothing really seriously would happen to me over here. I was worried about people in there.

FRAZIER: But his wife, Elaine Claiborne, says she was concerned about what came out of the plant during the blast.

EALY: It might not affect us right now, but later on in the year? Yeah, I've got concerns.

FRAZIER: Ealy says worries about pollution or explosions are just something you have to live with if you live near a chemical plant. He says, overall, it's worth it.

EALY: It's good to have them, but there's a risk in everything.

FRAZIER: Those risks are why the industry needs stronger oversight, says Kim Nibarger. He's with the United Steelworkers, which represents thousands of chemical and refinery workers.

NIBARGER: Take a coffee can, fill it about half full of gas and put it on your barbecue -- that's not much different than what's going on in these facilities. It's a dangerous, dangerous operation. 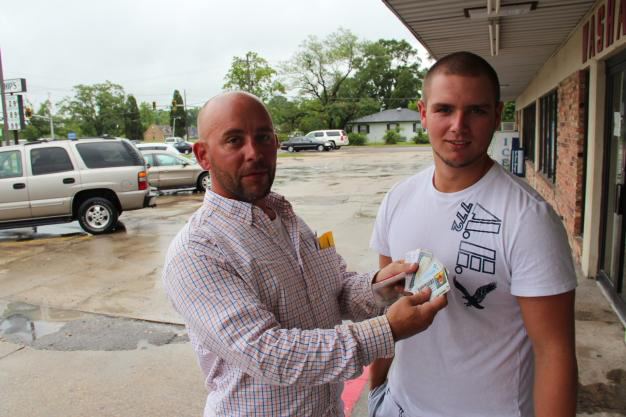 Joshua Gray, a carpenter and Josh Gibbons, a carpenter's apprentice came to Geismar, where construction jobs are plentiful. Gray holds OSHA and TSA cards-safety and background certifications needed to work in construction in the plants.Photo: Reid R. Frazier

FRAZIER: The Obama administration is paying closer attention to the issue of chemical safety. In August, the president signed an executive order mandating greater communication and enforcement among federal agencies who oversee chemical plants. He was responding to a fertilizer explosion in April in West, Texas. That blast killed 15.

Despite high-profile explosions, the chemical manufacturing industry is comparatively safe, according to records from the Occupational Safety and Health Administration. The industry has a fatality rate roughly half the national average for other industries. And it's much much safer than jobs like mining, forestry, or farming. But Nibarger says those numbers can be deceiving.

NIBARGER: No, I think the industry is more dangerous than it seems.

FRAZIER: That's because those injury and fatality rates don't always include contractors working at the plant. When those are accounted for, he says, those injury numbers are actually higher. But an industry trade group says even if outside workers are taken into account, the chemical sector is relatively safe and it's getting safer. The American Chemistry Council says its members have had a precipitous drop in accidents - 58 percent-since the 1990s. Scott Jensen of the chemistry council says those numbers include contractors.

JENSEN: While I think in the public's mind there is a renewed focus on safety, I think for our industry, that focus has always been there.

FRAZIER: Concern over safety issues aren’t likely to stop the chemical expansion anytime soon. In Geismar, the plants keep growing, to take advantage of cheap shale gas. And they're attracting workers, like Joshua Gray. Gray moved here from Baton Rouge to work as a carpenter. On a recent afternoon, he stopped in a parking lot on his way out of a laundromat.

GRAY: The economic part of it is outstanding. The money's here -- there's no reason to leave here -you're gonna make some money right here, for the next 10 years. It's equivalent to a gold rush.

FRAZIER: The irony of all this for Joshua Gray is he’s not really in favor of the expansion. He thinks the plants are releasing too much air pollution and they are bad for the environment. 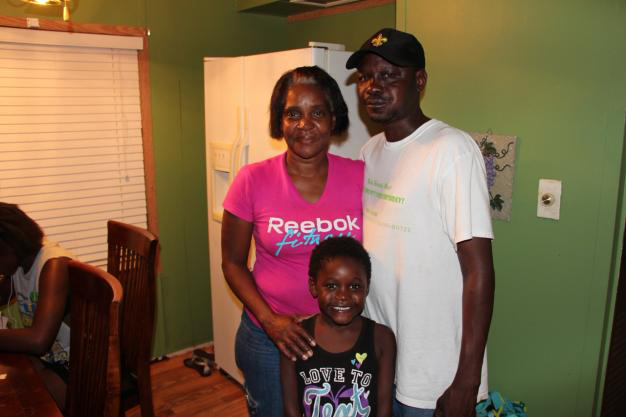 LeRoyal Ealy with his wife Elaine Claiborne and daughter Lajanaye Ealy, 6, live in Geismar, where he works as an electrician. Ealy thinks dangers of explosions and pollution are part of the bargain but Claiborne worries about the long-term effects from pollution released during the Williams Olefins explosion. Photo: Reid R. Frazier

GRAY: I don't, really in favor of none of it. It's not good for the environment, it's really terrible, but when you need a job you do what you got to do to make money.

FRAZIER: And Gray says he'll be here, as long as the money keeps coming.

CURWOOD: That's Reid Frazier reporting from Geismer, Louisiana. Reid's story comes to us from the series, The Coming Chemical Boom, produced by The Allegheny Front in Pittsburgh, with support from the Fund for Investigative Journalism.